"Dr." Paul Fromm Visits Malta: "We Would Have Slaughtered Them"

Paulie has been pretty quiet (for Paulie anyways) but it looks like he's been busy lately:


We so love when Paulie talks about himself in the third person.

There he is, speaking in front of a "packed" meeting.... in that there was likely only room for three dozen people max: 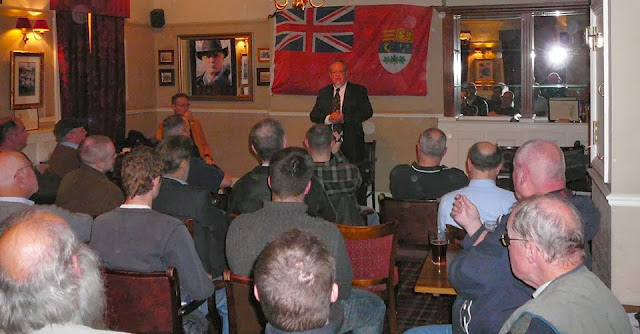 We just got the video of the event so haven't had much time to review it, but right away Paulie is referred to as a "paralegal" expert.

Glenn Bahr, Terry Tremaine, and a few others might beg to differ concerning Paulie's "expertise."

The video is also close to two hours of Paulie speaking so it's going to be painful.

Also at the meeting?


Not sure who Beardy McWhite Beard is (UPDATE: evidently it's someone named James Thring), but it wouldn't be much of a European soiree without the presence of her Ladyship Michèle Renouf. A reminder of why she is rather infamous in some circles:

After showing no interest in Jews or World War II until her 50s, Renouf now travels the world speaking at conferences, alongside former Ku Klux Klan leader David Duke and other extremists, arguing that the Holocaust has been massively exaggerated and that in any case the Jews are to blame. The only prominent female denier, the girl from The Entrance, NSW, has met Iran’s Holocaust-denying president, Mahmoud Ahmadinejad, and lauded him as a champion of free speech and democracy despite charges by human rights groups that his regime tortures dissidents and stifles free speech.

It does appear though that not all of her (and Paulie's) fellow travellers are big fans however:


Which brings us to the second stop on Paulie's European speaking tour. The woman who picked Paulie and Michele Renouf (nee Mainwaring) up at the airport was the chairperson of an event in Malta featuring Paulie and a guy named Norman Lowell:


What? Paulie in a photo where there is wine being consumed and it isn't Paulie doing the consuming?

The event seems in large part to promote the ideas of a Maltese ultranationalist group lead by Mr. Lowell called Imperium Europa. And while his European Union Parliamentary candidacy might be intended to sound impressive, an examination of his previous efforts (1,603 first-count votes from a total of 250,691 votes cast or 0.64% vote in 2004 and 84 votes first-count votes cast, or 0.03% overall,in 2008) makes it seem like Paulie is gilding the lily.

But we are getting ahead of ourselves. Let's first briefly return to the chair of the event Lettie Bacchino. One gets a pretty solid understanding of her position by the groups she supports. Like, for example, the Greek neo-Nazi political party Golden Dawn:


She also makes it clear whom she doesn't like:

But speaking of gilding the lily, how about this?

Dr. Paul Fromm, eh? A university lecturer for for a quarter century, you say?

And Paulie doesn't correct her, we're sure, not because he is complicit in padding his credentials, but because he doesn't wish to embarrass her. Yeah, that's it.

But as amusing as the introduction might be, Paulie's speech is a bit of an eye-opener:

Now most invasions come with people in uniforms and swords or rifles or machine guns or tanks or airplanes and so on. I wish it had happened that way, first of all because we would have slaughtered them. They would never have gotten in.

So, not to put too fine a point on it, Paulie is lamenting that there wasn't a scenario in which the Canadian
government didn't kill large numbers of people based solely on their ethnicity or land of origin.

The huge danger as I see it is that the world that was once ours as Europeans not so many centuries ago... we dominated all over North Africa and of course the European continent and until very recently North America.

Wistfully remembering colonialism? Looks like Paulie might not want, "them" over here, but wouldn't mind controlling "their" lands for the benefits of whatever colonial master took the territory in what were real invasions rather than the current fantasy Paulie and his ilk have about immigration today.

But Paulie has managed to narrow in on the character flaw that needs to be fixed in people of European heritage. And that character flaw is human decency.

Nope, we're not shitting you.

Another problem is that there are a lot of uninformed people who look like you and me [i.e. pasty white old men and women.... yeah, a bit of an editor's note here] will say, "well you know we're all human, we're all the same, we all bleed red and blah blah blah blah." No no, we're not all the same. We seem to have a self-destructive gene, those of us who are European, and that's called idealism or compassion. Now among ourselves that's a great thing... among ourselves compassion and idealism are great. But when we're dealing with people who don't share our views, who don't share our culture, compassion is our undoing.


He then goes on to suggest that refugees and economic migrants be allowed to drown in the Mediterranean.

The second speaker is this fella:

Now, we're not up with the new fashion trends the kids are into these days, but we're not sure that is how to wear the collar on a button-up shirt.

This is Norman Lowell, leader of the political juggernaut Imperium Europa. As mentioned already he is a candidate in the next EU election hoping to improve on his 0.03% he garnered during the previous election.

Listening to Lowell (who also refers to Paulie several times as, "Dr. Paul Fromm), he seems a bit.... well.... unhinged. Quiet, rather unassuming Canada is called a "tyrannical" country ruled by, "the usual suspects" whom he refers to as, "the predators" early on in this short video. He also speaks of  "our eternal enemy" or, "international manipulators."

So, who exactly is he talking about?

He is now unashamedly claiming Malta’s immigration issues as part of a Jewish conspiracy to destroy the “white race”. He has therefore set himself as an enemy of the Jewish people and is actively inciting hatred that threatens the Jewish people.
...
“After the two fratricidal wars, WWI and II, planned, perpetrated and prosecuted by our internal enemies...” whom he immediately identifies as “those international-manipulators scattered throughout the globe...” which according to him the world has had since then: “half a century of abject servitude to Financial Capitalism based in Washington and Bolshevist Communism centred in Moscow – both controlled by the same tribe.”

We will soon discover whom he identifies as “the tribe” and “international-manipulators” as according to him they are the “internal enemies” of Westerners. He continues with chilling venom and claims:

“The fall of Communism presented the tribe with the most serious threat to their existence since The Hero took them on in the 1930s. Never had they been so vulnerable, so exposed.”

The above is chilling as one can imagine who his “hero” from the 1930s is! This will become clearer as we read on. It is interesting at this point to expose his baseless hatred for the Jewish people and the ridiculous levels this reaches considering Norman Lowell is the same man who claims the Holocaust to be a “holy-hoax”, it is interesting to see here that his “hero” threatened Jewish existence in the 1930s. By what means could his “hero” have done this if the Holocaust did not (according to him and others like him) occur!!!

His diatribe continues and he claims that this same “hidden enemy”: “had led us to bleed ourselves white for nearly a century.”
...
“And we know the international rodents would do anything to further de-stabilise and weaken the White race.”

He goes on and maintains that: “The Arabs have been our friends since World War I.” And therefore banks Europe’s salvation on them citing as proof for such that: “The Mufti of Jerusalem, the great Haj Amin al-Husayni, was the only person whom The Hero offered hospitality at the Imperial Palace in Berlin – with the Palestinian flag flying higher than that of the Third Reich.”

Lowell ain't subtle, is he? He was actually criminally charged for a number of his more colourful comments.

Last week Paulie was a speaker at a conference in Texas organized by the anti-Semitic "American Free Press" and co-hosted by a guy who has written and promoted books such as the Synagogue of Satan and the Protocols of the Elders of Zion and where the commonality among all the other speakers are Holocaust deniers and advocates of anti-Semitic conspiracy theories.

This week Paulie travels to Europe where his co-speakers are known for their Holocaust denial and their advocacy of anti-Semitic conspiracy theories.

You know, if we didn't know any better, we might suggest there might be a bit of a trend at work here.
Posted by Nosferatu200 at 19:32

It is James Thring, he has been giving talks next to Renouf in the past: http://www.searchlightmagazine.com/blogs/searchlight-blog/the-curious-case-of-the-peacenik,-the-labour-lord-and-the-holocaust-deniers

Is there ever going to be a time when you, Nos200, aren't going to whine about something? Every single entry you make is nothing but you whining about what other people do or don't do. What's the difference between you and a baby?

Get it together or drop out. Your cause is futile at the moment.

I'm literate and have a better credit rating than most babies.

So basically you're saying, you're roughly 15 years older than a infant. Blog > Nos > Makes sense.

There was a time when this Blog was almost mature, with mature content.
I can wait for the Craig Cobb TV reality show that's coming. Don't forget to watch, it's right on your level.

Humor seems a bit lost on you.

"So basically you're saying, you're roughly 15 years older than a infant. Blog > Nos > Makes sense."

Oh please! People who are 15 years old have no credit ratings. Try to keep up chuckles.

"There was a time when this Blog was almost mature, with mature content."

You evidently have never actually read this blog, or perhaps our mockery of boneheads in numerous posts since the very start was too subtle.

"I can wait for the Craig Cobb TV reality show that's coming. Don't forget to watch, it's right on your level."

Best watch MSNBC's "Lockup" if you want to see Crusty the Cobb.

This Blog shouldn't be about humour. You constantly print lies and other uninformed information that could potentially ruin innocent peoples lives. Not funny. Grow up in that department.

Craig Cobb will not be on your mentioned show "LockUp". But instead on some reality TV show which will do more damage to Racialism, then you could ever type out. Basically you're just filling your own personal gratification with this Blog and it's 1000 readers.

Please make up your mind.