NOTE: Received the following message that we are now posting to clarify Michael's relationship with the anti-racist movement:

MIKE WAS NOT AN ANTIFA LEADER. HE IS A SKETCHY SHIT TALKER THAT LIKED TO PLAY ANTIFA HARDMAN. Thanks for the PSA but Mike just hung around antifa/political circles and was just a dirtbag punk. Please clarify that...

As much as we would like to believe that every person claiming to be an anti-racist is a decent human being (and we do think most are decent human beings), we aren't going to turn a blind eye when we learn about behavior that is criminal.

Consider this then to be a public service announcement.

A former antifa leader hanger-on from Niagara, now in Montreal, has been accused of committing a series of sexual assaults over the years, including assaulting minors. One individual posted the following in a discussion concerning the accused:

A 15 year old in Montreal and me back in Late September 2012. And many others before and inbetween. I have an ongoing investigation in Niagara against Micheal David Rosenberg aka Mike Rza. I hope he burns in hell. He's a sick human who needs to rot in hell.

I went through being raped by him in my own home. I truly believe this young girl. You can't have sex with the unwilling. Let him see my comments as I more angry and full of raging hatred more than ever.

I keep playing this over and over in my head. I wish that I reported the rape sooner but I was scared of everyones' reactions towards me. I would of had more evidence to of convict him and then I wouldn't have to hear of another victim. I am guilt ridden in a way because of it. She is just a baby. I am older and can deal with it alot easier. It rots me to the core thinking about it.

Now, we understand rape is a pretty damn serious accusation, and though the source is a friend of a friend whom we trust implicitly we would be cautious about posting the claim in public. However, the accused kindly posted what amounts to a confession on his own profile: 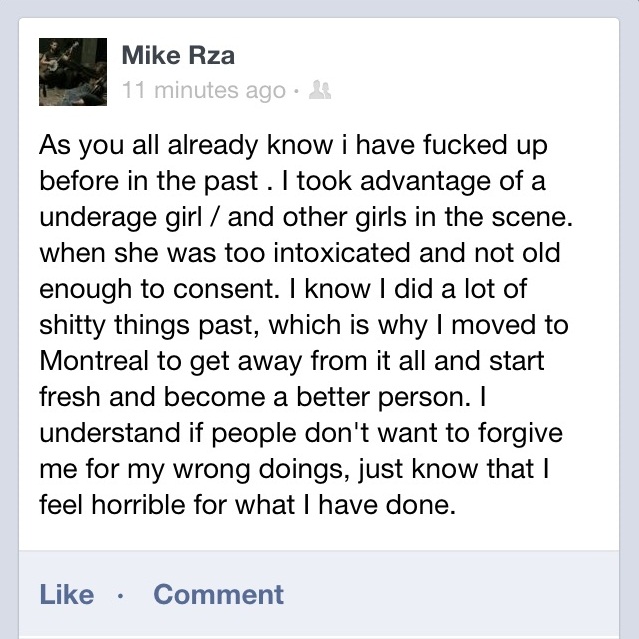 This was posted yesterday.

Very impressed to see this statement. Sexual assault is a horrible crime which leaves the victim scarred emotionally for life. We can see evidence from high profile cases in the Roman Catholic church and Residential School system just how destructive it can be.

As a Father of 4 children 2 of which are a 16 & 12 year old girls lets just say I have a 20gauge that will b judge and jury if anyone hurts my girls or any of my mates children.

MIKE WAS NOT AN ANTIFA LEADER. HE IS A SKETCHY SHIT TALKER THAT LIKED TO PLAY ANTIFA HARDMAN. Thanks for the PSA but Mike just hung around antifa/political circles and was just a dirtbag punk. Please clarify that...

Hey, you know what would be helpful? If you decided to post a picture of what this guy looks like. I know a lot of people recognize the name, but all the same if he assaults someone again (but plays nice first), they might not know who he is by his name/to get away from him. This was one of the clearer pictures I found of him on facebook (but obviously, please remove the other person/any one else's identifying information from it, including if you can tell that it came up from my own facebook's profile search).

there was a report on the morning of March 4th of him being in Vancouver.

Yeah, you and every father (and mother and brother and uncle and cousin) out here. Pretty much everyone would do whatever it takes to protect their children, we're actually hard wired for that. I don't know why everytime I read a story about some scumbag commiting a crime like this it has to be followed by someone else flexing their internet muscles and bragging about what they would do, as if the girls hurt in these cases don't have fathers who love them. Do you think these girls father's wouldn't have protected them given the chance ?

That above global TV link has nothing to do with this story....so...I unfortunately dated this creep back in 2003 before he got involved in the punk scene and am wondering where I can provide information to help the case against him.

Victims and former girlfriends of Rza can report to their local police office and make a statement.

This man also raped me multiple occasions. He invited me to a show and then a party afterwards (we Had mutual friends and he was dating my friend ALSO underage at the time) and so i went to hamilton to meet him there only there was no show.. and he saud it got cancelled last min but there was a party back at his house he says so we go there and there is no one at tgis party.just us. It was now very late and the buses had stopped running at this point - so i was stranded in a city where i didnt know anyone.. so i was forced to stay over.. i went to sleep in the living room and woke up to him in bed with me with his hands down my pants.. i got up and switched sleeping places and woke up to the same thing (he did this literally all night...) and on multiple different occasions. To many other females.. he managed to snag pictures of my vagina..not sure how and to this day its creepy as fuck.(from when i was 15 years old) and he came to montreal (i am now 28 years old) and have a large amount of friends there in the punk scene i was living there at the time... and he showed a bunch of ppl pics of my vagina (and they told me he was going around showing these photos of my vagina from when i was 15 to everyone) and i was mortified... hes such a loser and im so glad he is finally getting what he deserves. Hes a total creep