Doug Christie: The Truth Will Out (Part III)

You know, it is remarkable how, when presented with the truth, how people in an echo chamber refuse to acknowledge it. Take our friends at Free Dominion, for example. Despite what we think is pretty strong evidence indicating that Doug Christie and those Holocaust deniers, klanmen, and neo-Nazis whom he defended had certain shared political beliefs, they continue to suggest otherwise. However, there are those who say even if he did agree with Holocaust deniers, it doesn't matter since he was someone who selflessly fought for everyone's right to speak and write freely.

You can follow the link here if you wish to read the full discussion, but we think that these few posts sort of encapsulate the debate (by the way, we have no idea who poster "Free Markets" is, but he or she has already been accused of being a supporter of the Collective. We suspect this article will only heighten the already existent paranoia): 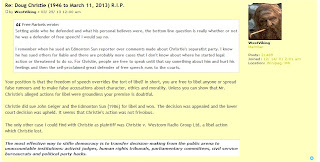 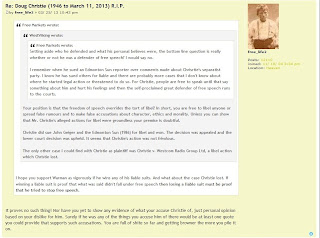 Well then, shall we take up "free_life2's" challenge then?

On November 20, 1993, Doug Christie held his annual George Orwell Free Speech dinner and award ceremony, however on this occasion the doors were guarded by neo-Nazi boneheads: 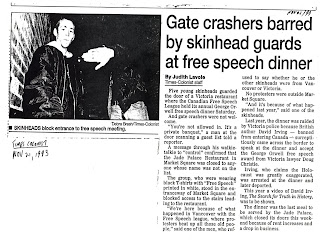 The reason is that the previous year there was a bit of an incident. You see the previous year Christie invited Holocaust denier David Irving to appear at the dinner to receive a George Orwell Free Speech award.  The problem? Irving was barred from entering Canada. When came anyways, well, suffice it to say there were some problems, resulting in a pretty epic meltdown by Mr. Christie: 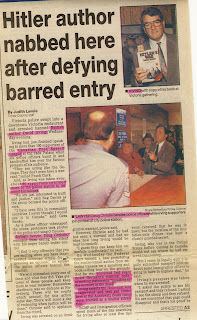 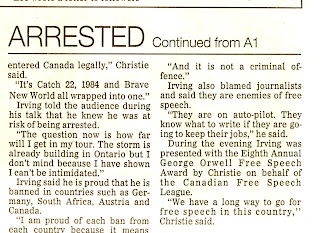 This would appear to fit into the idea that Christie could very well have been a free speech proponent. Then again, it was Christie himself who had invited Irving and, given his own statements about the Holocaust, it seems that Irving's speech is speech that he agreed with.

The question then is how did Doug Christie respond to speech he didn't agree with, particularly speech and writing which was critical of him?

Here is where the facade of the free speech hero really takes a hit. When faced with criticism, Christie sued or threatened to sue.

The first case we found was from 1981. We can't be sure of the reason or the outcome though:

This suit was followed up by one that we have a little more information about. In 1984, Christie won $30,000 as a result of a suit against "The Edmonton Sun" and columnist John Geiger who refereed to Christie's Western Canada Concept Party as, "a group of misfits... collection of throwbacks... losers," and "right-wing rantings" in addition to suggesting that the WCC was Alberta's answer to the KKK. The award was upheld on appeal, however we did note something of interest:

"Foisey [the judge] ruled the Charter of Rights and Freedoms does not apply because it was only proclaimed in 1982 after the column was published."

We just find it interesting that Christie's award was upheld simply because the document he used to justify the rights of Holocaust deniers was not in force when he felt he was slandered. Had the Charter of Rights and Freedoms been in effect at the time of the column, would the suit have been successful? Who knows.

Again though, these aren't the only examples:

In another case, Christie sued radio talk show host for defamation for this statement:

"Doug Christie has aligned himself so many times with these perverted monsters that he has to be viewed as one himself, in my view,"

In another decision, the Supreme Court said lawyer Doug Christie will not get another chance to sue a radio talk-show host for libel.

The court refused to hear an appeal by Christie against Gary Bannerman and his former employer Westcom Radio Group.

.... he wasn't successful then either.

In 1997, Christie threatened to sue the University of Victoria student newspaper, "The Martlet," for statements he claimed were defamatory:

A local lawyer is threatening to sue the University of Victoria's student newspaper over printed comments that members of his Canadian Free Speech League are "extremist thugs."

Doug Christie has given the Martlet a 30-day deadline to apologize for editorial comments made in its Nov. 7 edition.

The Martlet ran the editorial denouncing Christie's group for using the Victoria Public Library as a "venue to spread hate."

In a letter addressed to the Martlet, Christie wrote, "I am giving you an opportunity within the next 30 days to write a retraction of those remarks and an apology for any suggestions that myself and the persons in attendance on behalf of the Canadian Free Speech League were engaged in the promotion of hatred."

In the letter, Christie also advises the Martlet to "seek legal advice on this point."
...
Christie has a history of launching libel suits, sometimes successfully, sometimes not. In 1984 he was awarded $30,000 in damages for comments published by columnist John Geiger in the Edmonton Sun.

In his article, Geiger called Christie and supporters of the Western Canada Concept Party members of a "lunatic fringe" and an "Alberta version of the Klu Klux Klan."

In 1985 Christie launched an unsuccessful libel suit against Vancouver radio host Gary Bannerman after the open-line host said: "Doug Christie has aligned himself so many times with these perverted monsters that he has to be viewed as one himself, in my view."

A jury found that Bannerman's words were defamatory but constituted fair comment and were used without malice.

"I find that ironic that on one hand, Christie claims to be such a staunch defender of free speech, then calls for a retraction when a journalist writes something he doesn't like," Lupton said.

Christie also sued for his clients. For example, Christie was for a time successful in preventing the showing of a t.v. movie that he and his client claimed showed his client, Jim Keegstra, in a negative light:

And, while he defended Malcolm Ross's right to free speech in publishing Holocaust denial material, he represented Ross in his law suit against a Jewish cartoonist, Josh Beutel. Ross sued in 1998 claiming defamation of character as a result of the publication of editorial cartoons such as these: 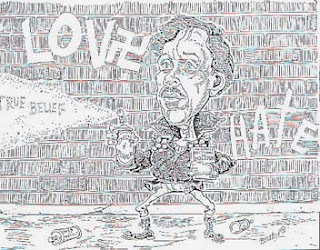 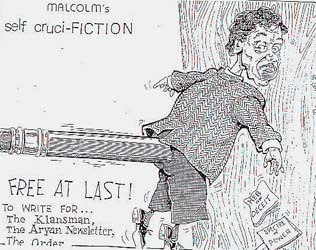 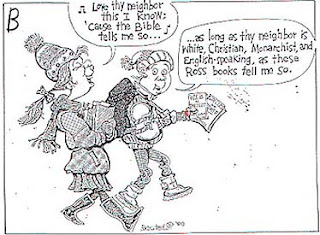 While Ross initially won a judgment of $7500.00, Beutel appealed:

Ross' lawyer, Doug Christie, told the New Brunswick Court of Appeal yesterday his client is a "soft target" whose personal reputation is worthless now that he has been forced out of the classroom because of his views.


He described Beutelas "hate-filled" and a "bully" who was ready to distort the facts to achieve his goal of vilifying Ross.


"His motive was obvious - to destroy Malcolm Ross in front of the teachers," Christie said in asking the Appeal Court to increase the damage award to $50,000 or $60,000.


He said Beutel went too far in drawing the comparison to Nazism and that the traditional defence of fair comment doesn't apply.


Lined up against Christie and Ross, however, is a formidable array of lawyers who have flown into Fredericton for the two-day appeal that concludes today. The decision will be reserved.


Schabas also told the court there is a great deal of concern in the newspaper industry about the lower court ruling against Beutel.


He said the decision will have a chilling effect on free speech if allowed to stand.

In 2001, the original ruling was overturned:

A New Brunswick freelance cartoonist who was sued for defamation by the province's most-notorious Holocaust denier has won his case on appeal.

"Honesty in expressing one's real view has been found to be the bedrock foundation for a good defence of fair comment," read the unanimous judgment, delivered yesterday by the province's chief justice, Joseph Z. Daigle.

The case stemmed from a presentation cartoonist Josh Beutel gave to a teachers' association in which he showed cartoons of Malcolm Ross, a former Moncton, N.B., teacher who was barred from the classroom in 1991 because of his anti-Jewish writings. The cartoon in question compared Ross to Nazi Joseph Goebbels.

In 1998, Ross sued Beutel for defamation and won. The lower court ruled that because Ross isn't a Nazi, the cartoon was libelous. It also ordered Beutel to pay Ross $7,500 in damages.

Five groups, including the Canadian Jewish Congress and the Canadian Civil Liberties Association, intervened to help argue Beutel's appeal in January, 2000. Lawyers who intervened during the appeal argued that the lower court ruling restricted Canadians' right to publicly comment on important issues.

"It is a very good judgment . . . It confirms that cartoons aren't to be taken literally. Cartoons are all about distortion, exaggeration and caricature to get a message across," said Paul Schabas, who represented the Canadian Newspaper Association and Association of Canadian Editorial Cartoonists during the appeal.

Given what Christie said during the appeal, we can be pretty sure what side of the free speech argument he fell on in this case:


Christie said Beutel's presentation "mocked Ross's religious beliefs" and humiliated him in front of his peers.

"The cartoon indicated he was the moral equivalent of Goebbels. It was not true and it was not fair comment."

Actually, come to think of it, this statement really is quite ironic in light of this:

But then, we suppose since Christie said it, it would be fair comment.

We'll finish up this series at a later date with some final thoughts.
Posted by Kurt Phillips at 23:13

Thank you again to the Collective for all the labour and integrity that went into this project. There are more alternative obits popping up out there, but none I've seen that is the tribute to honest journalism like this series.

As most of our readers will appreciate, the truest story of this now historical Canadian personality can now best be told when there is minimal risk of energy-sapping litigation; not that publishing his own writings and uncontested statements in the media after years in the public domaine is libelous in any way.

Now if any student or interested party ever wishes to seriously examine organized racism and the evolution of anti hate expression legislation and its enforcement in Canada over the last 30 years, this critically important resource is now up and in place, revealed in any intensive internet search of the topic.

Perhaps one day someone else will go to the court records and actually research all of the many harassing actions that Christie filed but never followed through on.