An Examination of Marc Lemire: Part I

Today we will deal with the first part. Is Mr. Lemire a bigot? We won't use the term "Nazi" or even "racist" because the two words are loaded and tend to be used inappropriately. In general, we refer to people as being Nazis or neo-Nazis if they adhere to the tenents of National Socialism. In that regard, Terry Tremaine (who calls himself a National Socialist) and most members of the Calgary-based Aryan Guard would fit the bill.

Now, the Fourniers seem to be claiming that as Mr. Lemire was found to have violated only a single count of section 13 of the Canadian Human Rights Act (publishing an article on his website which he himself didn't write) after a 6 year investigation is proof enough that he isn't a bigot and that his only crime is having stood up to Mr. Warman. They claim that he has been maligned and smeared by the taint of, "racist." Be sure that to accuse someone of racism is a very serious charge and not one we take lightly. And, as we've said, it's a loaded term that tends to stifle discussion. Rather we'll examine if some of the views that Mr. Lemire has indicated over the years could be described as bigotted. We will post the information provided by Mr. Lemire himself and allow our readers to draw their own conclusions with minimal editorial input.

Mrs. Fournier has also cites Freedomsite as being being operated by Mr. Lemire when she provides links to the site which deny Mr. Lemire is, "a Nazi" and the deny that he is the individual pictured alongside Ernst Zundel (and on this latter issue we agree that the individual is not Mr. Lemire).

As such, we feel that we should start with the current content of Freedomsite.

At one point Freedom site had a picture library. While the picture links are now broken, one can still view the titles given to the numerous pictures that you would have seen had you clicked on a working link:

We wonder why Mr. Lemire would write, "Schindlers List exposed as a FICTIONAL ACCOUNT! Later publications of this book, list it as "Non-Fiction". Only when it comes to the "Holocaust" (tm) can things become FACT by mere repitition." What claims are being made about the Holocaust? Why is the word Holocaust in quotation marks? And why the (tm) designation?

We can also examine the text library: 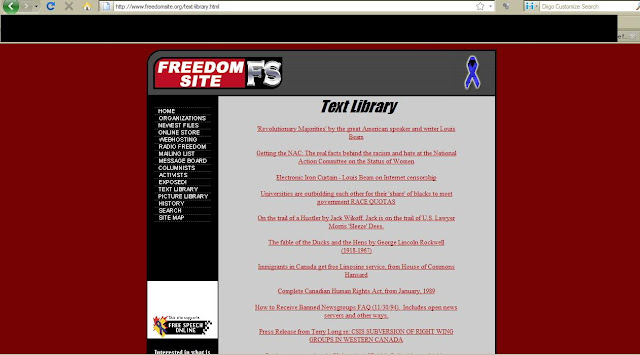 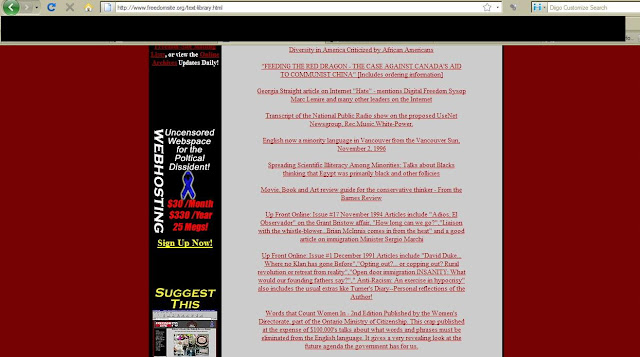 An examination of some of the featured authors is of interest.

1. Louis Beam: Former Klansman and the originator of the philosophy of, "leaderless resistance."
2. George Lincoln Rockwell: Founder of the American Nazi Party
3. Terry Long: Former head of the Canadian branch of the Aryan Nations.
4. Past editions of "Up Front" which was the newsletter of the Heritage Front.
5. The Barnes Review: a bi-monthly magazine founded in 1994 by Willis Carto, dedicated to historical revisionism such as Holocaust denial.

Finally, there is the section entitled, Articles and opinions from thought-provoking Canadians. Here one can read articles such as these:
An examination of the website operated by Mr. Lemire might give some cause to question the agenda of the project. And while there's certainly no slam dunk here, and the Freedominion folks might accuse us of assuming, "guilt by association" but as Mr. Lemire has the power to post whatever he wishes on his own website, reasonable critical thinkers may be concerned.

We'll now move on to Mr. Lemire's own posted comments.

Some of the Free Dominion members have commented with some concern that Mr. Lemire is a frequent poster on Stormfront. Stormfront was created by Don Black, a former Grand Wizard of the Ku Klux Klan and, interestingly, involved with future Heritage Front founder Wolfgang Droege in a failed effort to overthrow the government of the island nation of Dominica. One poster attributed the posts to, "youthful frustration" or, "an inclination to rebel":

Mrs. Fournier states that Mr. Lemire because, "they gave him a podium":

There are problems with these two explanations. First, Mr. Lemire registered on Stormfront in 2002, long before his troubles with the CHRT began. As he was born in February 1975, Marc would have been 27 years old when he registered. And as for being a podium by which Mr. Lemire could discuss his troubles with the CHRT, most of his posts occurred before 2005 when things began to heat up and a complaint officially filed against him. Marc posted on Stormfront when the complaints were filed against him.

As of October 5, Marc Lemire had posted on Stormfront 600 times between June 12, 2002 and September 2, 2009. Not prolific by any stretch of the imagination, but it could hardly be attributed to a whim.

Neither was Marc a passive participant on Stormfront interested only in being provided with a podium. The following concern Marc's tech work on an Internet stream celebrating David Duke's release from prison: 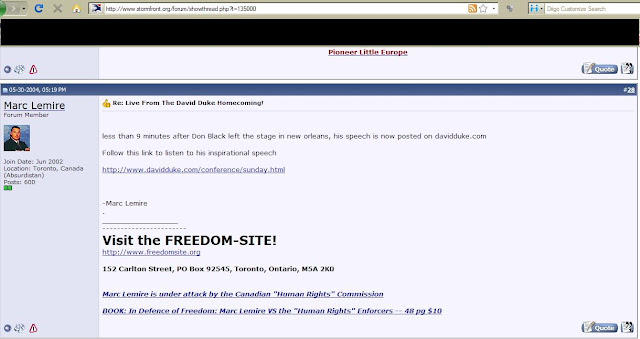 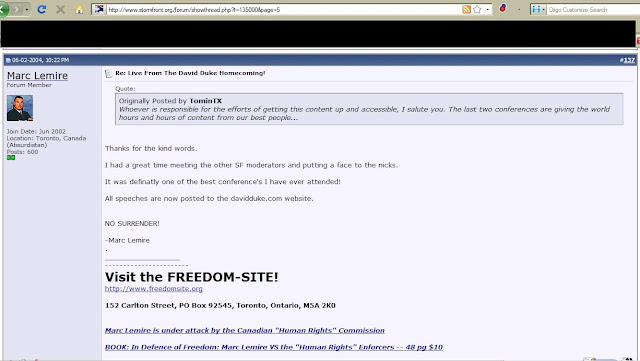 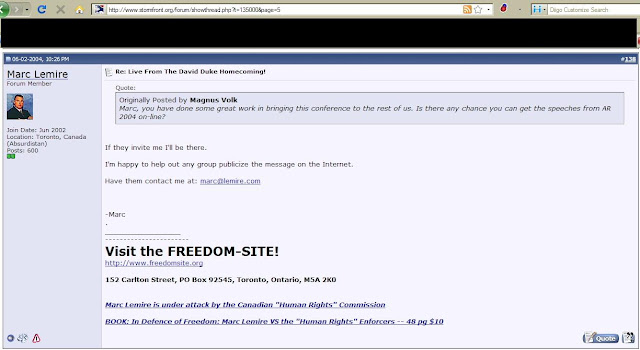 Well, how about the content of Mr. Lemire's posts?

Unlike street thugs like the Aryan Guard in Calgary, you won't find the high-profile and "respectable" members of the "White Nationalist" movement uttering racial epithets. Instead of shaved heads, bomber jackets and sheets, they'll wear suits and ties. Cross burnings? No, conferences will suffice (sort of like the David Duke homecoming that Mr. Lemire was involved in). And the use of euphemisms abound. "White Power" cries instead become "White Pride" (note the picture of the Aryan Guard members). "White Supremacy" instead is labled, "White Nationalism" or "WN". Controlled media, international bankers and Zionists are, of course, Jews.

So we can assure you that you will not hear David Duke refer to a Black man as a ****** or Don Black write that a Jewish woman is a ****, at least not in public. And we can almost guarantee that our readers will not find anything similar uttered by Mr. Lemire in public or online under his own name. He's too smart for that.

That's not to say, however, that he doesn't slip on occasion. 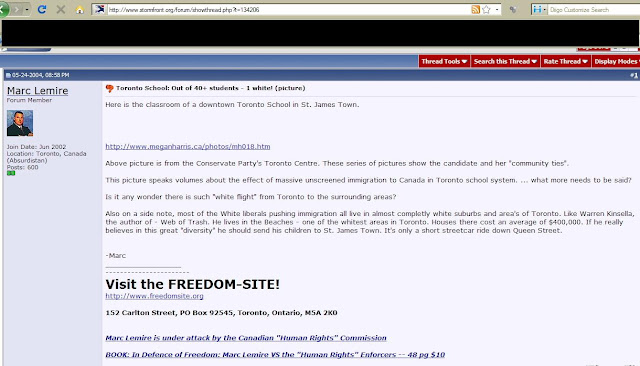 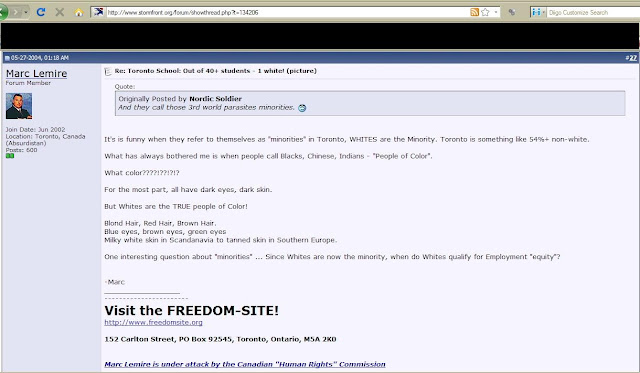 Mr. Lemire lets Stormfront readers know where they could pick up the virulently antisemitic and racist books, My Awakening and Jewish Supremacy by David Duke: 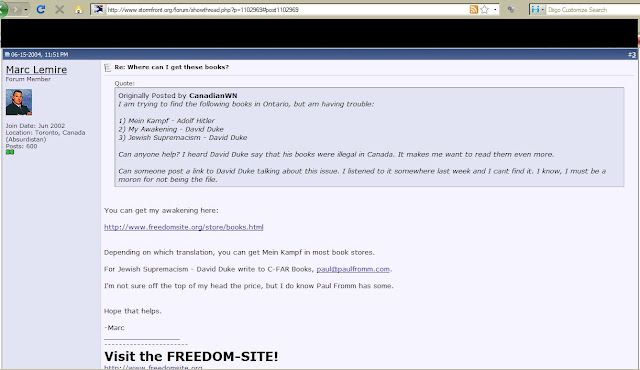 The desire of a National political party to, as Mr. Lemire says, "represent our beliefs": 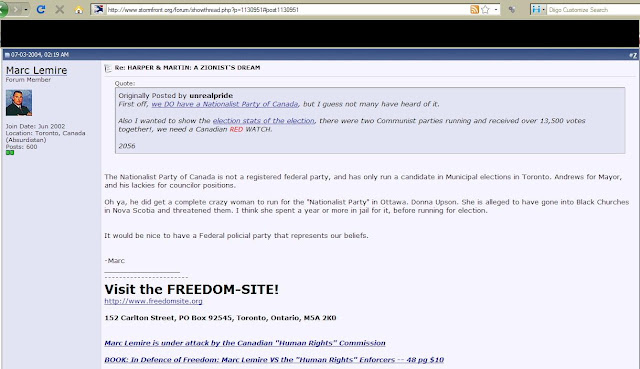 Mr. Lemire and Mr. Fromm complain about the, "Zionists," the "Jewish Lobby" and "The Israeli occupiers of Palestine": 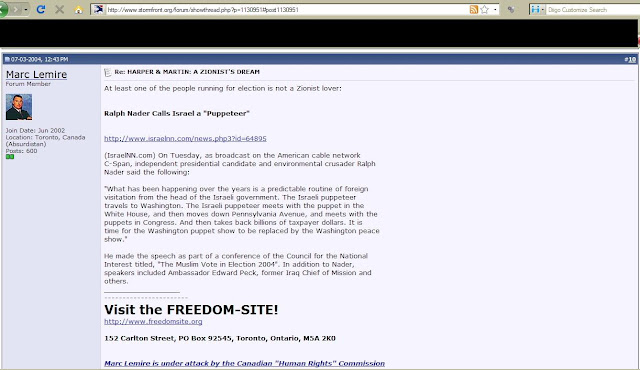 Assumptions that ethnic minorities are inherently corrupt, incompetent, and criminal:

Holocaust in sarcastic quotations (see the example from the Freedomsite picture library at the beginning of the article): 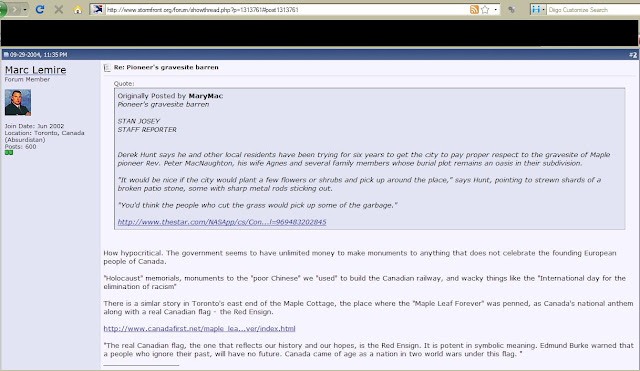 Israel a dictatorship akin to North Korea and China (perhaps our Free Dominion friends of Israel would like to comment?): 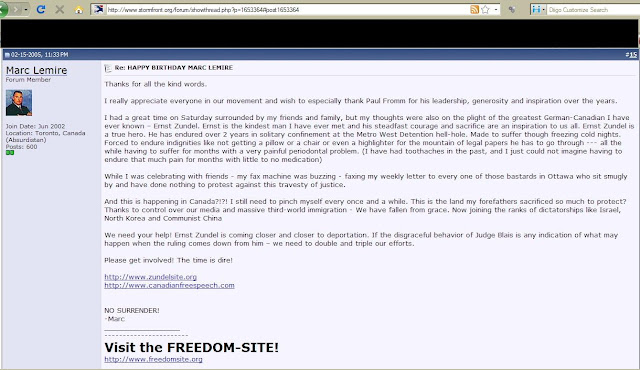 Note the Zundel reference in the above screen shot. More on that later.

Mr. Lemire hasn't always been a gentleman to his fellow Stormfront posters and has gotten into at least one flame war on the forum. That was with a co-founder of the Alberta-based group Western Canada For Us, Peter Kouba (Mr. Lemire will later go on to mispell Kouba's surname). By the time this exchange occurred, there had been a bit of an online history between the two men: 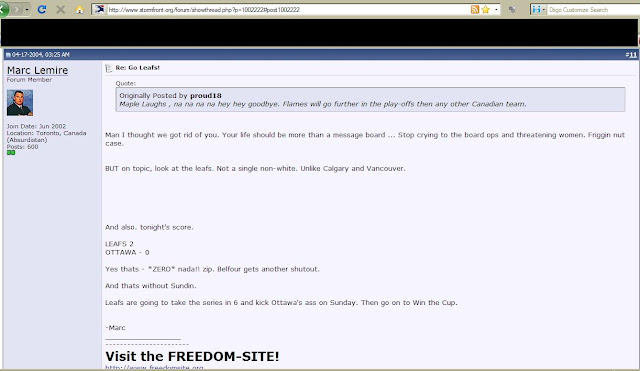 We're not sure why it would matter that the Maple Leafs, at the time of this post, didn't have "a single non-white player. Unlike Calgary and Vancouver." What an odd thing to mention. 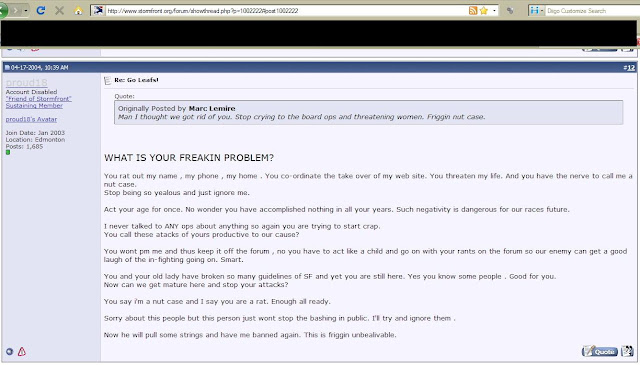 And then Mr. Lemire's wife, also a Stormfront poster, gets involved: 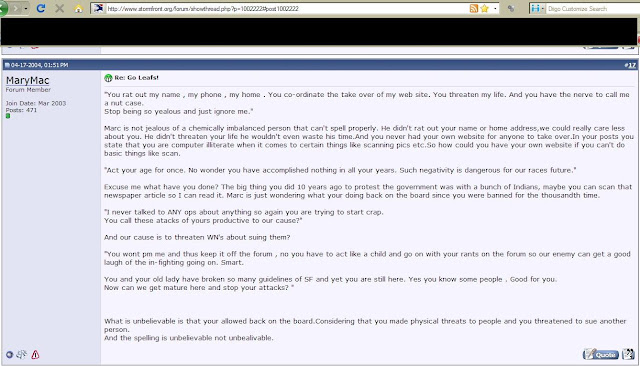 There we have the use of the "WN" euphemism. Seems "MaryMac" self-identifies as a "White Nationalist"? Not to say that her husband does as well though. Still, the online pissing match between Mr. Lemire and Kouba will continue. This time in relation to a disasterous performance by Glenn Bahr on a national radio program. By this time Kouba had been driven out of the organization he had co-founded with Bahr and was a bit vengeful. He called in to the program and humiliated Bahr. Mr. Lemire makes the following comments not long after: 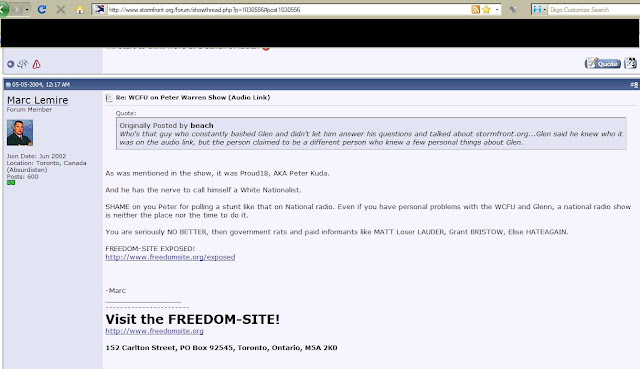 Does Lemire self-identify as a "White Nationalist" in this dressing down of Kouba? We'll let our readers decide. Kouba responds just before being banned from Stormfront: 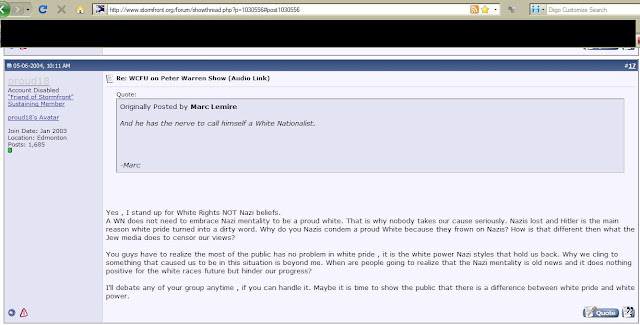 Mr. Lemire also appears to have a sense of humour, though the humour might not play well in polite company. On Olivia Chow's loss in the 2004 federal election: 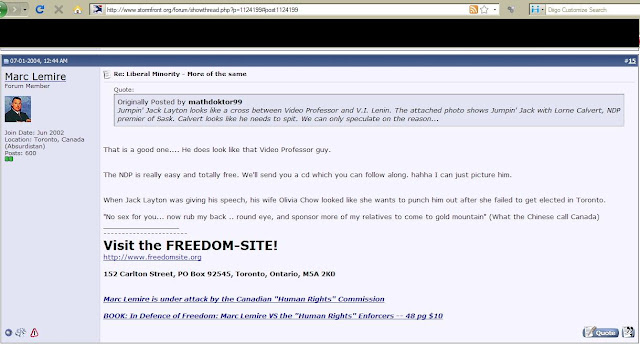 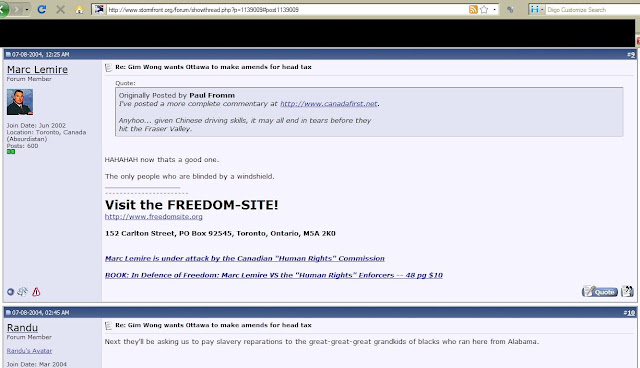 And finally, Mr. Lemire discusses the pitfalls and hazards of immigration, first by commenting on a claim that immigrants don't use deodorant: 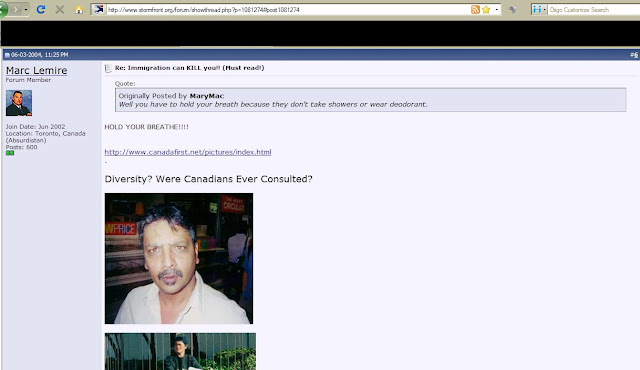 Mr. Lemire then proceeds to post several pictures showing ethnic minorities as dirty and less than desirable (though that is a game we here can play tit for tat).

Finally, Mr. Lemire makes the same joke that got Mr. Kinsella in so much trouble and for which the members of Freedominion took a special sort of glee: 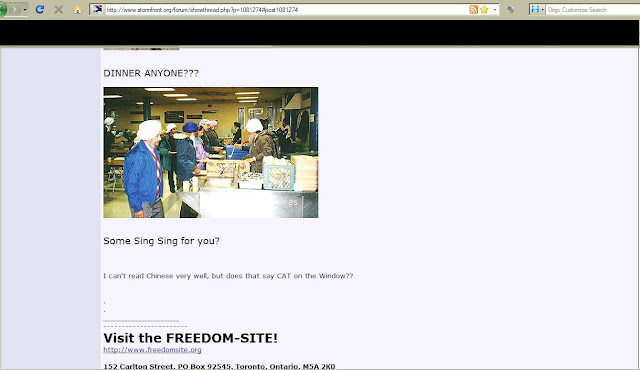 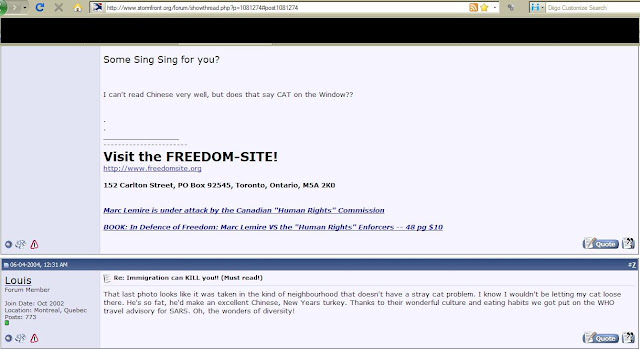 Both the comments by Mr. Kinsella and Mr. Lemire were based on gross and ignorant stereotypes. The difference? Mr. Kinsella apologized. Twice.

We tried to allow Mr. Lemire's posts speak for themselves. However we recognize that we have opened ourselves up to certain accusations. First, we selected only a handful of the 600 posts made by Mr. Lemire on Stormfront and that these few we've discussed are not truly representative of Mr. Lemire's views. Second, we could potentially be accused of not providing a proper context for the posts and by making Mr. Lemire appear worse than he actually is. Finally, we could be accused of not having a life for having spent so long writing this article and collecting the screenshots. Come to think of it, that final accusation has some merit.

As for the first two accusations, we invite our detractors to examine the record. As we said, Mr. Lemire has posted 600 times on Stormfront. Don't take our word for it. Read what he has written.

In our next article, we'll deal with the two issues concerning the Heritage Front: was Mr. Lemire a member and, if he was, the leader of the organization after 2001.
Posted by Nosferatu200 at 05:33