A Look Back at Diagolon and the Ottawa Occupation: A Teaser

I have an article that I'll be working on focused on the events in Ottawa during the "Trucker Convoy" of which there were few actual truckers participating. Those who follow/followed me on Twitter will remember that I wrote extensively about the event while it was ongoing from the start to finish.

1. If you are following me odds are that has been since January 29, 2022 when I started composing some epically long and frequently snarky threads on the "Freedom Convoy" which I often characterized as the #OttawaOccupation. pic.twitter.com/mt3TIEYUT5

The tweet posted above highlights the days and weeks of tweets that I made covering the story at the time.
I also created two other threads more recently touching on Pat King's claims made during the Ottawa Occupation that he made during his appearance before the Public Order Emergency Commission hearing:

And it was... something.

Suffice to say I don't have time to deal with everything he said, but I thought I would put out a thread to provide context. pic.twitter.com/y1JNHI6e8l

1. When I did the timeline on Pat King's involvement in the #OttawaOccupation (link below) I didn't include a lot of what I had.

In retrospect there was a lot that I should have included, thus here are with Part IIhttps://t.co/BtEm9MHyFE

However, I thought that I would also focus on another group who was there as well by providing another timeline:
Jeremy Mackenzie also spoke at the POEC hearings from Saskatoon where he is currently incarcerated on weapons and other charges. However during is time before the Commission Mackenzie spent a great length of his time talking about the Canadian Anti-Hate Network, suggesting among other things that CAHN has fabricated a lot of the incidents that have been published in part to justify government funding (as a board member I will assure readers that aside from a one time grant of some $250,000 or $260,000, CAHN has not received government funding as of the writing of this post). My name was also dropped a few times for reasons that I may discuss at a future date.
That Diagolon members participated in the events in Ottawa is a fact.

However, the participation of Diagolon in Coutts, AB has been called into question by some despite, you know, all the actual evidence that Diagolon was in Coutts and one of the members has been implicated in a serious plot:
No bail for man accused of plotting to murder RCMP at Coutts border blockade 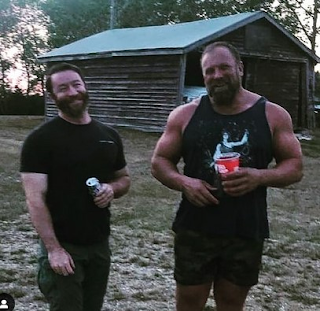 "Sly Fox" and many co-accused signed a flag hanging on the wall of Smuggler’s Saloon at Coutts, as did several other blockade attendees, incl Artur Palowski & Rebel News content creator Kian “K2” Simone.

The flag was posted to Facebook by Lysak’s co-accused, Chris Carbert. 4/ pic.twitter.com/vYcRjfI24i

So when I actually get to the time line, it will include a discussion of "Sly Fox" and an early indication that at least some in Diagolon might have been more aware of what was going on than has been claimed.
Posted by Kurt Phillips at 18:02