After more than 12 years, in January 2020, the founder of the ARC blog, Kurt Phillips, stepped away, passing the blog to new writers. Since then, he has contributed the the Canadian Anti-Hate Network as both a writer and a board member.

This is Kurt's first guest article.

The murder of George Floyd that resulted in mass protests against racial injustice has become an international movement as people from around the world have take to the streets to protest police brutality and systemic racism within their own countries. Canada has been no exception as protests and rallies in support of BLM and other racialized peoples have occurred in every major city. These protests have been with very few exceptions peaceful as far-right counter-protesters such as the Urban Infidels and Soldiers of Odin among others have been vastly outnumbered resulting in these groups slinking off into the shadows.

The protests however have not been confined to the big cities. Several smaller cities and towns have also held protests including a number in Alberta. Though many of the people in these communities have been supportive, they have also been targeted by far-right groups who have attempted to intimidate organizers into shutting down.

One such example is the town of Innisfail, Alberta where Brittany Bovey organized a rally against racism. In doing so she quickly became the target of an orchestrated campaign of intimidation to prevent the protest from occurring.

Among those who appear to have engaged in this campaign was WEXIT leader Peter Downing who has been railing against the BLM movement and the fight for racial equality. In one post made to the group’s social media page, Downing wrote the following:


It’s time to show these communist fairies who is boss.

We’ll bring “enforcement” back to law enforcement. Its gonna be like pre-1982… the Good Ol’ Days are coming back baby! 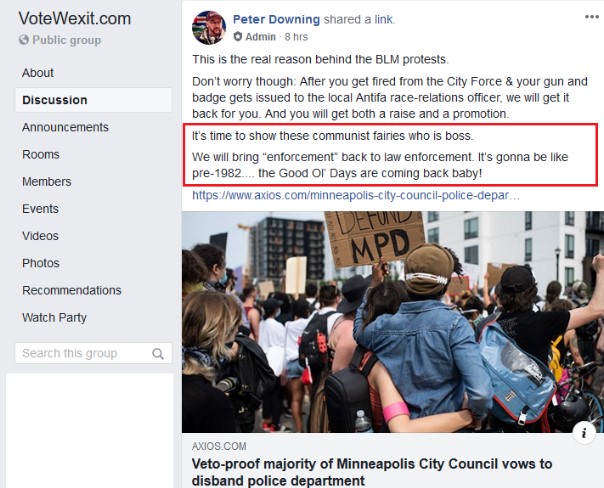 Downing himself is a former RCMP officer whose former wife alleges he threatened to throw her out a window.

Because of a deluge of threatening messaged Ms. Bovey initially cancelled the event which resulted in Downing posting on Twitter, “Innisfail Rocks! Good job telling these communists to take a hike.” However, when the event was rescheduled he posted this on Facebook:


It is likely that there will be a counter-protest.

We don’t take kindly to left-wing terrorists in these parts.

Many of the posts on the WEXIT group page engaged in the usual conspiracy theories that we have become accustomed to; that any person coming to protest was being paid to do so, that George Soros is the mastermind, or that “we never had any problems with racism until Trudeau was elected” with some claiming they were never racist until the BLM movement began. Still others suggested engaging in targeted violence as, for example, one person suggested that a snipper should take out the leaders and that “two boxes of ammo should do the trick.”

Calls for violence against the participants were not confined to the WEXIT pages as similar sentiments have been found on Yellow Vests Canada, Northern Guard, Worldwide Coalition Against Islam, and some groups supporting the PPC. Perhaps the most concerning comments are found in the III% Alberta group. The III% is an American-based militia founded on the erroneous belief that only 3% of colonists participated in the War of Independence thus they were among the elite. The III% also have made inroads into Canada and members have participated in numerous rallies and protests often acting as “security”. Members of the Alberta III% shared several links to news about the rescheduled rally including those from the far-right Rebel Media which characterized the protest in Innisfail as “BLM outsiders planning ‘re-education’ rally in small Alberta town.”

Some comments were as follows:


Where can we contribute to buying more live ammo for the cops?

Can I bring my AR just to piss off the Liberals

Asking for a lot of trouble

Perhaps the most telling comment appears to have been a reference to an especially ugly time in Alberta’s past:


Where are the brothers from Caroline? Only [need] 4 or 5 of them to put these fools in their place

In the 1980s Caroline, Alberta was the headquarters of the Aryan Nations in Canada. Then leader Terry Long organized a rally that brought members of the Aryan Nations and Klansmen from across Western Canada and the United States. Among those present was Carney Nerland who would later be convicted of manslaughter in Saskatchewan after shooting Leo LaChance, a Native trapper, in the back. Long himself was later implicated in an assault on a former journalist by three neo-Nazi skinheads in Edmonton that left the man blinded in one eye. 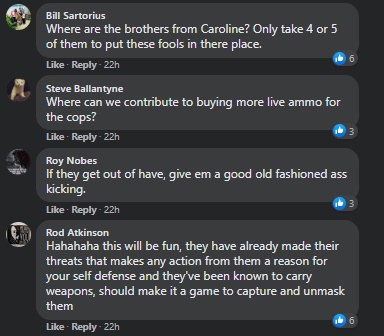 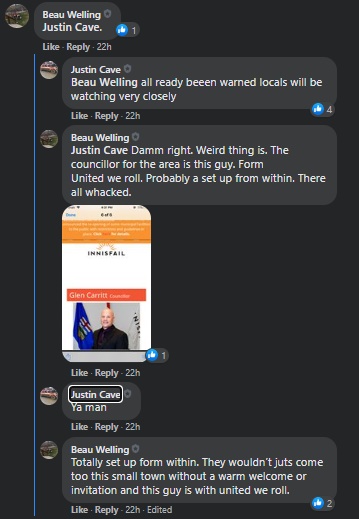 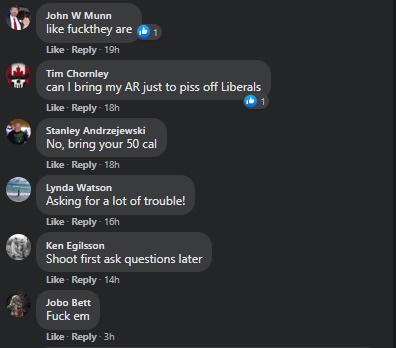 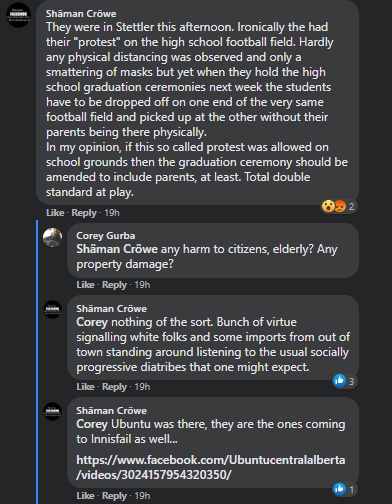 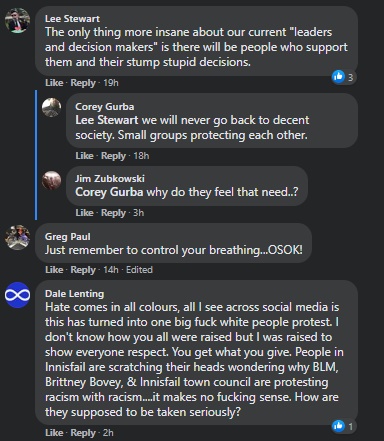 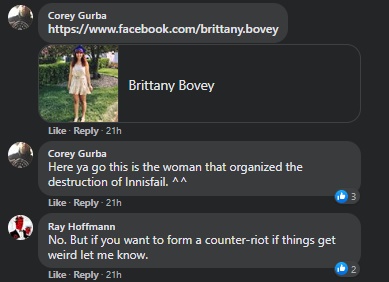 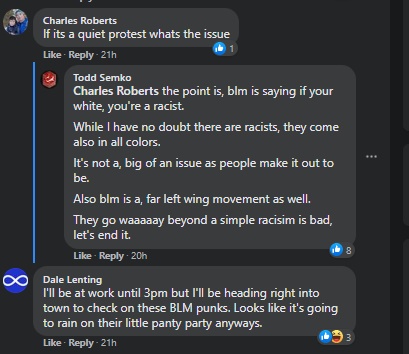 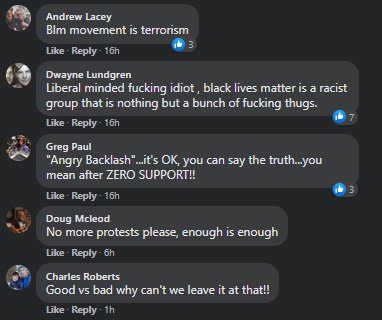 The Innisfail protest took place on June 13. It is unclear if any of the III% militia appeared as they said they would, however there was a very small counter-protest. 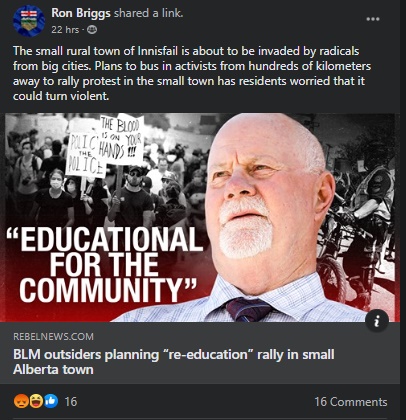 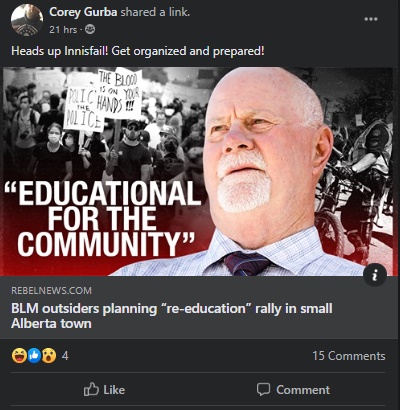 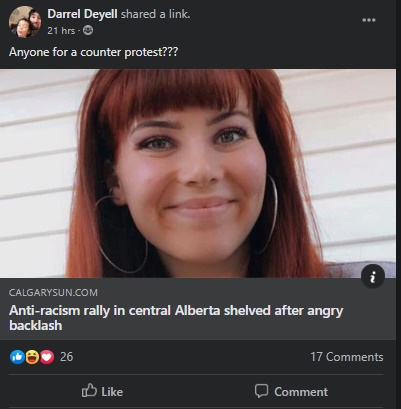 One of the counter-protesters was Pat King who helped to organize the Yellow Vest convoy to Ottawa and had been involved with Downing’s WEXIT movement. King has spoken of Canada and being an “Anglo-Saxon” nation and has perpetuated antisemetic libels. Also present was Keann Bexte who now works for Rebel Media but who has his own problematic history with race. 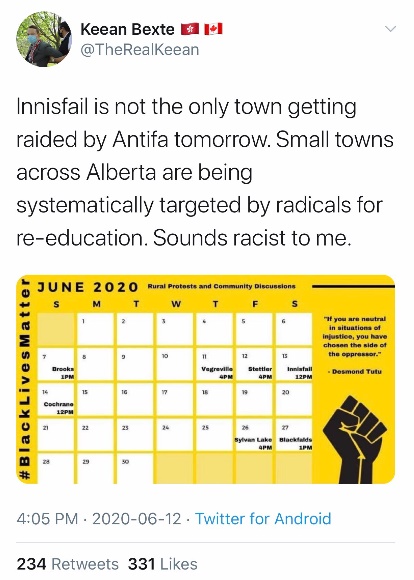 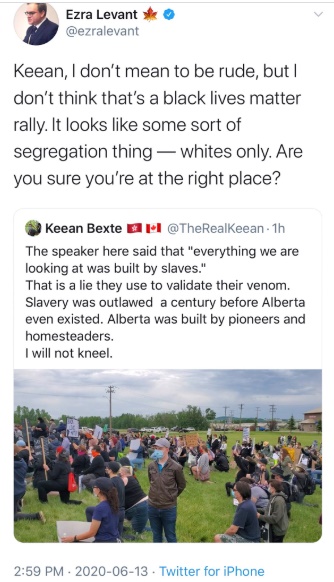 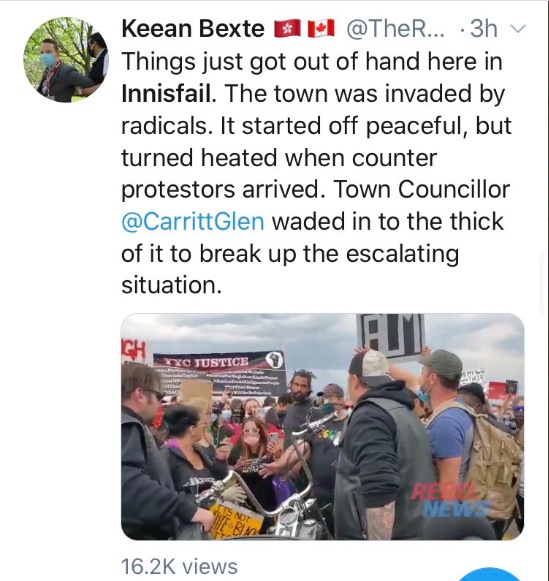 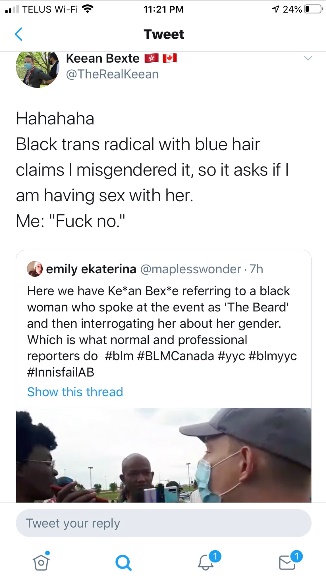 Despite the efforts by counter-protesters to provoke a violent response, the more than 300 attendees from both Innisfail and surrounding communities refused to take the bait and engaged in civil discussions with many of the counter-protesters who were at least willing to listen. The success of the protest in Innisfail has already inspired activists in other smaller communities to hold similar events recognizing that racism isn’t a big city problem but one that exists everywhere despite the inability, or refusal, to recognize it exists.
Posted by Yellow Vests Canada Exposed at 20:13