Although the media reaction to the WEXIT campaign has been mixed with some journalists giving a pass to the more extremist elements of members, others examined them with a more critical eye. It should surprise no one that WEXIT leader Peter Downing has ramped up his rhetoric while the media has been more focused on issues such as COVID-19 and the Black Lives Matter protests happening across the world.

We have written about Peter Downing and the WEXIT campaign in the past. Downing is a former RCMP officer with a history of violence.

According to a now-deleted 2012 article by Ryan Tumilty in the St. Albert Gazette (which has also been removed from archive) he was fired for uttering threats. While the article is no longer available (weird!) we did find a copy on another website. The article highlights Downing's lack of consistent credibility, and issues raised by the Crown.


The concerns about Downing appear to date back years. Before criminal charges were laid against him in July 2010, the Crown prosecutor’s office was already raising questions about Downing’s reliability as a witness.

A November 2009 memo concluded he was an unreliable witness and if his credibility was a central issue, prosecutors should withdraw the charges. Downing provided the memo to the Gazette, because he believes it was written as part of an effort to remove him from the RCMP after he complained about superior officers. In the memo Crown prosecutor Jeff Morrison assessed Downing as a witness, looking specifically at a Supreme Court case called R. v. McNeil. The case involved an officer in Ontario who testified in a drug case while facing drug-related criminal charges and internal discipline hearings himself.

The court’s decision sets out when prosecutors have to disclose a police officer’s previous misconduct or criminal convictions. After speaking with other prosecutors and reviewing Downing’s files, Morrison concluded Downing was a problem. “The general consensus amongst prosecutors who have dealt with Downing is one of incompetent zeal,” says the memo. “His motives are not dispassionate; he has a personal agenda inappropriate of an RCMP member, which causes him to overreach.”

Morrison concluded Downing could be reliable, but not consistently. “This issue is not that he can’t be fair, trustworthy and dispassionate; merely that he is not with sufficient frequency.” At the end of the document Morrison comes to one conclusion. “It would in general be imprudent for the Crown to run Downing matters where Downing’s credibility is a central issue and where there is no independent corroboration, whether or not the defence is attuned to the issues highlighted by the McNeil disclosure.”

Downing's former wife alleges he threatened to throw her out a window:


Downing was first suspended in July 2010, shortly after he was charged with uttering threats. At the trial last summer, Downing’s ex-wife testified he threatened to throw her out the window during a heated argument. But Downing’s lawyer focused on timing, noting the incident was reported months later when police were called for another argument.

Downing also ran for parliament as a member of the Christian Heritage Party, who are well known for their anti-Muslim and anti-LQTBQ platform.

Lately however Downing has escalated his rhetoric regarding the Black Lives Matter Protests. His comments have been so bad that they've created division within the WEXIT Facebook group, causing many of its members to question whether Downing should be leading the party, with some saying they are done with WEXIT altogether.

He started by questioning the autopsy in the George Floyd murder, and by posting a Daily Mail article that details Floyd's criminal history in an attempt to justify and erase the horrific actions by the Minneapolis Police Department (why else would you focus on a rap sheet when a man was so brutally killed?) He received support from some WEXIT members but most of his followers were unimpressed with his take on the incident. 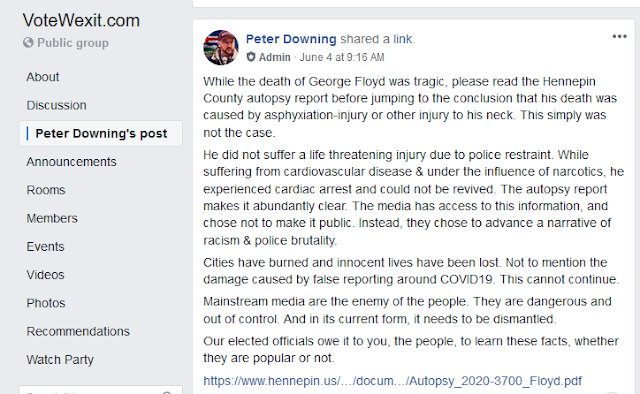 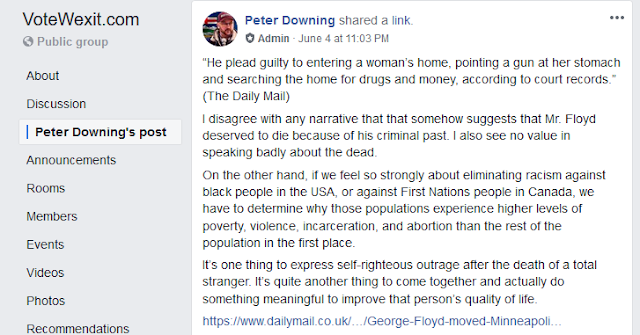 A number of followers expressing disappointment with Downing's take

While his comments about George Floyd are incredibly ignorant, what is more alarming are his comments directed towards Black Lives Matter protesters. In a post about policing (remember, he's a former RCMP officer) he made an ominous threat about how they'll 'bring the enforcement back into law enforcement'. His threat also included a homophobic insult to so-called 'communist faeries'. 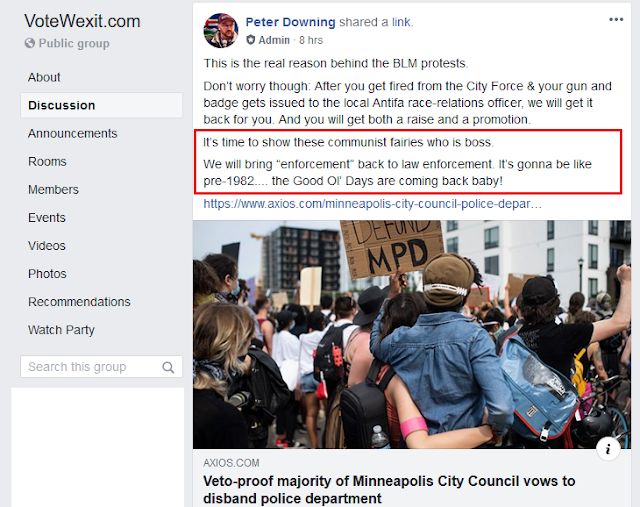 This post also received some backlash, but overall WEXIT members were more supportive.

An anti-racism rally is scheduled for June 13 in Innisfail, Alberta, and Downing has implied that WEXIT will be present to counter it. Never a good look for a group to counter protest an anti-racism rally, yet that's what he says will be happening and the WEXIT members appear to be supportive. 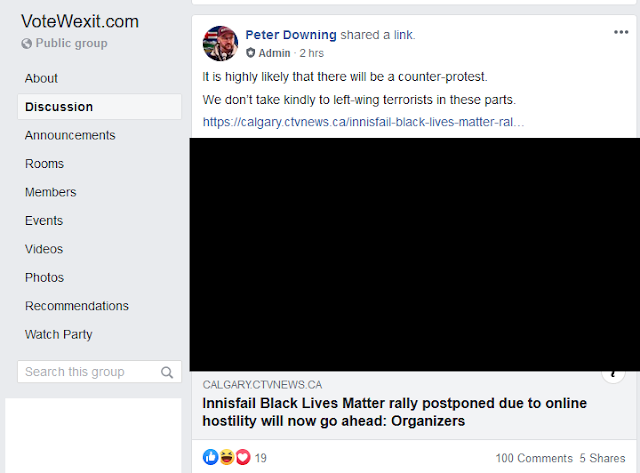 The rally was already postponed due to the online backlash received. The RCMP have stated that they will have a presence at the rally because the Soldiers of Odin also plan to counter the anti-racism rally.

Peter Downing is now saying that they will be holding a charity road hockey game in support of American law enforcement officers killed in the line of duty.

He can claim all he wants that this is about charity, but I see it as an attempt to arm themselves with hockey sticks for a counter protest.
Posted by Yellow Vests Canada Exposed at 18:03