Wexit has proven to be a fragmented movement, rife with drama. While the mainstream media continues to provide them more credibility than necessary, despite blatant problems with both those who champion Wexit, and those who run it, changes to the organizational structure have caused it to essentially split in two - those who follow Peter Downing, and those who side with Pat King.

A mutiny is occurring.

Shortly after the Vice article was published on October 30 highlighting the fact that Peter Downing and Pat King have, uh, certain political leanings that veer toward the conspiratorial and far-right, Downing gave King, who was previously on the board of directors and seemingly Downing's right hand, the boot.

#Wexit and Downing held an event on Saturday, & Pat King was not very happy with it.

Turns out Downing ousted King recently, over a disagreement re: strategy. We have our doubts whether that was really the reason, but nonetheless. /1#cdnpoli #abpoli #bcpoli #cdnmedia pic.twitter.com/Hnn8P74LMz
— Yellow Vests Canada Exposed (@VestsCanada) November 4, 2019

King continues on to say that he has "insider information" that the @CanadianForces would back them in a coup, because they're "sick of it." He knows this, you see.

He's also really mad he was kicked out. He should have been up there! He was robbed! /2 pic.twitter.com/BWVT1v4EdC
— Yellow Vests Canada Exposed (@VestsCanada) November 4, 2019

It seems that their fundamental disagreement came down to a "constitutional convention," which King wants and Downing doesn't. In subsequent live videos, other Wexiteers have stated their disapproval of Downing's attempt to turn Wexit into an official party, indicating that it shows Downing is still willing to work within and stay in Canada.

But we aren't here to to discuss their policy disagreements, because we don't care about that. We're here because of the infighting, and because, despite the fact that some Wexit supporters are vocal about keeping the bigoted rhetoric out, it isn't working.

As he's speaking to these men, he briefly turns the camera toward them and we can see... a European Brotherhood hoodie. Who is EB? A white nationalist "European nationalist" clothing company and neo-Nazi record label.

Do we expect Downing and company to know who the European Brotherhood are? Not necessarily.  A lot of people don't. But if they really care about taking a stand against racism, then they should listen to us instead of writing us off as trolls, liars, and fakes.

The Wexiteers aren't all racists, but racists sure love Wexit. And when you have people who promote the Great Replacement conspiracy theory, are active in hate groups, and who disseminate Holocaust revisionist garbage within leadership, it's bound to cause some problems.

As it stands now, Wexit has fractured into two distinct groups. The group that sides with King hosted a "town hall" on their Discord channel on November 5. It's very long, so we clipped some of the best parts for our readers. It's worth noting that Northern Guard's Ed Jamnisek was brought in as a kind of "constitutional expert," which led to a lot of laughter over here.

Prior to the official town hall, there was a group of members chatting among themselves. One user, MISG, pushes the idea of "social trust" and lowering the IQ of Canada via immigration:

If all this talk about "social trust" rings a bell, that's probably because it's what Mark Hecht wrote about in the overtly white nationalist op-ed in the Vancouver Sun:

In fact, social trust corresponds more closely than any other factor to predicting economic prosperity. Harvard economists Alberto Alesina and co-authors from a paper titled, Fractionalization, argued that greater diversity leads to stunted economic growth. In other words, diversity is a weakness as far as the economy is concerned.

In 1981 The World Values Survey began an investigation into cross-cultural beliefs, values and motivations, and has since shown that societies with high social trust are not only more economically productive but also happier. The most successful are homogeneous countries, not the diverse ones.

Hecht argues that diversity, tolerance, and inclusion are failed policies in Canada which have led to higher levels of distrust within society. He quotes the anti-Muslim think tank Gatestone Institute to make a point about how many Muslim immigrants “have no intention of assimilating into any western society.”

Instead of being a blessing, Hecht argues diversity has led to “a lot of arrogant people living in their countries with no intention of letting go of their previous cultures, animosities, preferences, and pretensions.” He claims when there are too many immigrants in a neighbourhood, “those overwhelmed by newcomers that are not like themselves, lose trust and soon move out.” He also seems to advocate for segregation and disingenuously suggests that the most economically successful countries are homogenous.

“Is excluding certain people from one’s society a requirement? The short answer is absolutely,” Hecht continues. You get the idea.

MISG claimed that immigrants are self-serving, while Canadians are altruistic and generally care about the common good:

HeftyFinesse and MISG bemoan the "immigrants taking our jobs," claiming that immigrants move to Canada and become doctors with lesser credentials (untrue). They discuss Omar Khadr, and whether immigrants should be eligible for citizenship in 20 or 30 years:

Getting to the actual town hall, Jayme Knyx came on to let King know that CityTV put out a brief news clip on Wexit, and the video was no longer available. After playing the clip, which Knyx had downloaded, King claims he will file a lawsuit.

5/ Pat King is now threatening to sue @City_tv for the clip, which he and his supporters say is taken out of context and unfair (!!)

Now, the clip in question initially referred to King's online rhetoric as racist, and showed a few seconds of  a clip from one of our tweets. The full clip shows King making a facial expression when referring to Jews (and he has absolutely expressed antisemitic ideas in the past), and inferring that Chinese folks have names that sound as though change was thrown down stairs:

Pat King put out an unremarkable live that isn’t worth coverage except for this bit, where he goes full antisemitic & racist. #YellowVestsCanadaIsAHateGroup

The clip was removed by CityTV, the reference to racist rhetoric edited out, and the clip re-uploaded. We strongly feel it was accurate the first time around, and removing it just serves their purpose of martyrdom and persecution.

One thing that's happened a few times in the past that we tweeted about but never really went into on the ARC blog is King's historical revisionism holocaust denial. Yes, Holocaust distortion and "soft denialism" is a form of Holocaust denial, and is antisemitic. 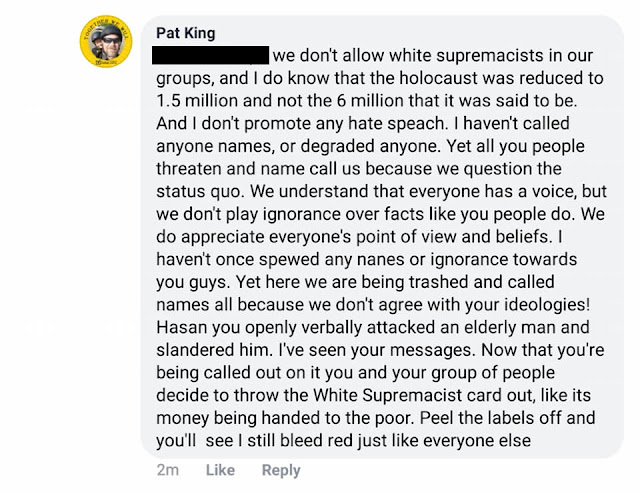 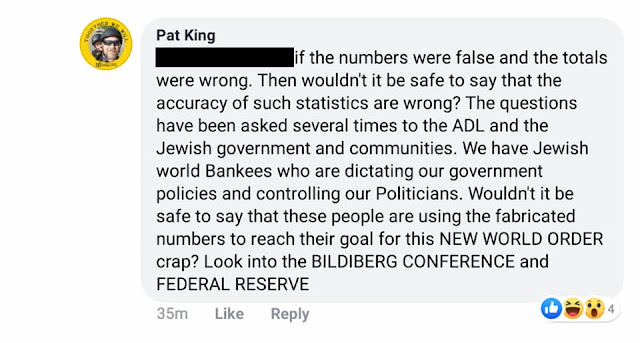 Jewish world bankers dictating policies and governments,eh? May as well call it the ZOG, Pat.

It's worth noting that in the clip from CityTV, Downing claims King never had an official role within Wexit, which we know is false, as King has claimed repeatedly, and others have confirmed, that he was on the board. But Downing is known for being not credible and unreliable, a point driven home when, during the CityTV clip, he confirms he doesn't believe that Trudeau is "normalizing pedophilia," and acts almost offended that could even be suggested. 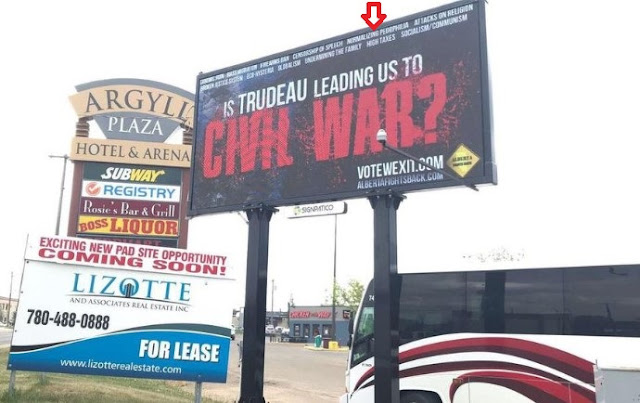 Back to the town hall, Jayme Knyx, furious, threatens Downing:

King claims Downing is engaging in psy-ops, and falsely accuses Downing of still being an RCMP officer:

The conversation turns to racism, where members discuss what racism is, and the belief that if
"free speech" is stifled, it will inevitably lead to violence, despite there being no evidence to actually support this:

And hey, it's admirable that people are taking a stand! We'll absolutely give credit where credit is due.

Except, when you dig into the Discord channel, it becomes clear that there are some issues. 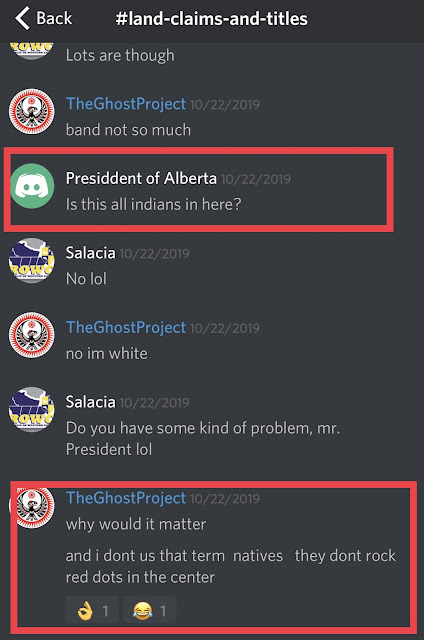 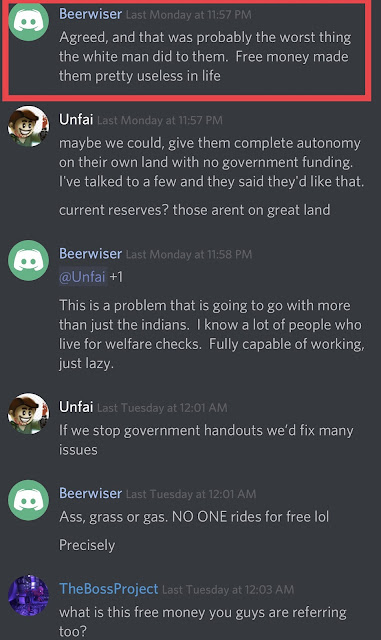 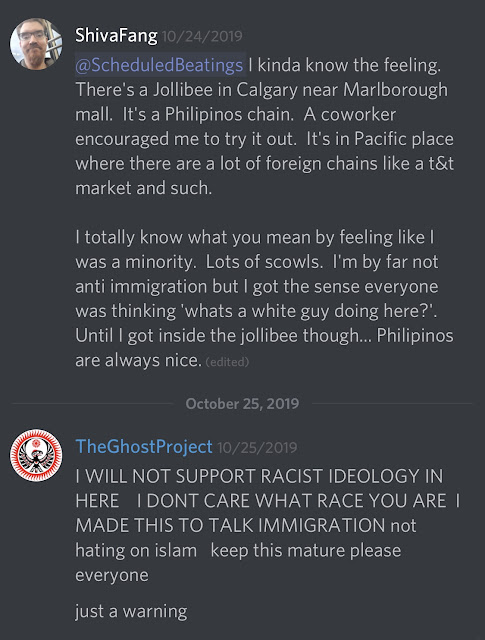 Imagine thinking you're a minority because you went to Jollibee

Pro-tip, Ghost - you won't achieve that with folks like King and Ed Jamnisek around.

Back to the town hall, it was actually streamed on Facebook by King (and deleted), as well as YouTube (by Derek Storie and Ed Jamnisek.) Here are some of the live chat comments during the Noble Savages livestream: 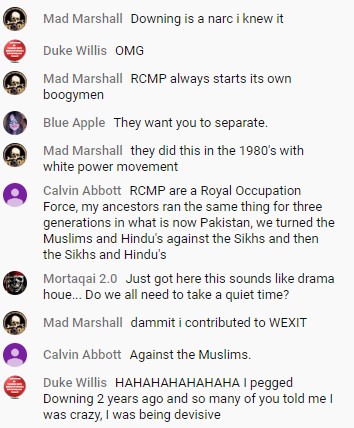 The infighting is delicious 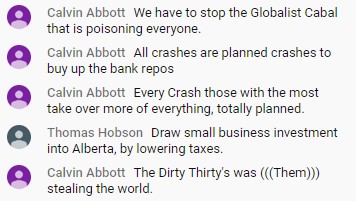 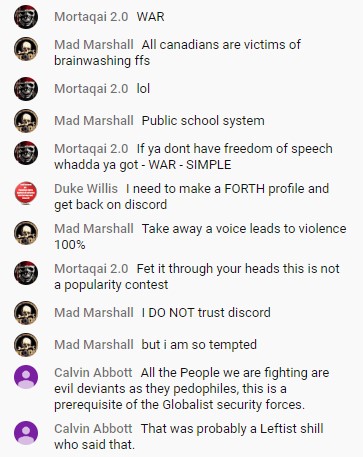 On November 7 Pat King went live on Facebook to play a recording of an interview he did with CBC, complain about the "smear campaign," and talk shit about Downing.

Here's King walking back the accusations of racism in this clip, suggesting he really is just talking about Canadian culture, while acknowledging we've always been multicultural:


About that, let's revisit this August 6 video he posted:


Or perhaps this one:

So Pat King did a live stream last night trying to say he's not racist. 🙄
Can anyone guess how that went?
First he claims Canada is an Anglo Saxon country.#YellowVestsCanadaAreAHateGroup pic.twitter.com/O0Gyi0B3gY
— Yellow Vests Canada Exposed (@VestsCanada) August 25, 2019

Anyway, King goes on to complain about free speech, M-103, and how the government is giving wage subsidies to newcomers and not Canadians (which isn't true at all):


Ultimately, you have to ask yourself: when Stormfront starts to champion your movement as the possible solution to their problem, are you really the good guys? 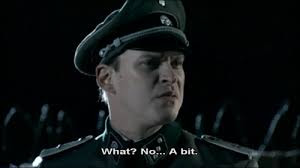 Downing's VoteWexit Facebook group is still a cesspool of anti-Muslim and anti-immigrant hate, despite his claims the group isn't bigoted. 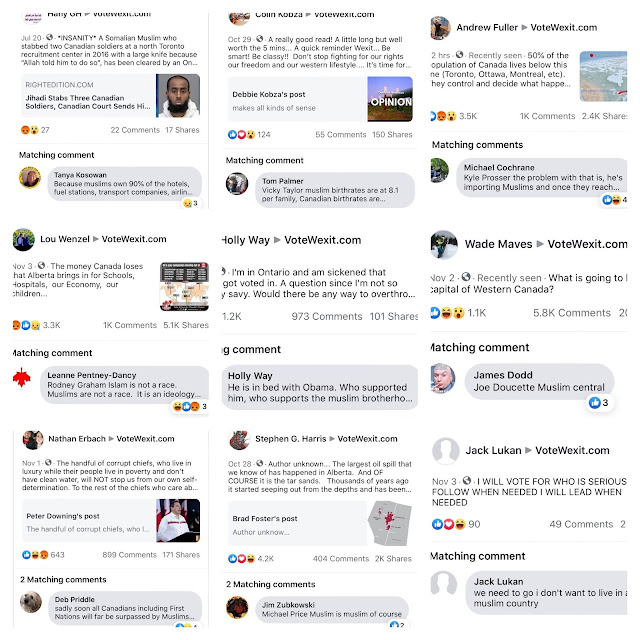 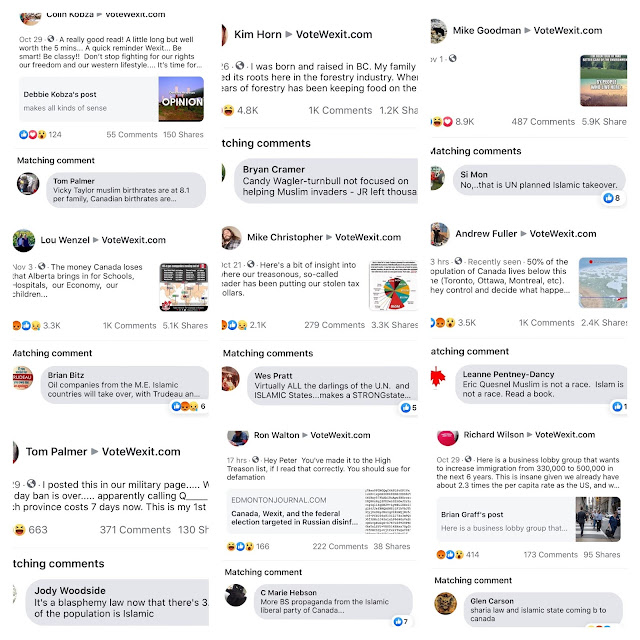 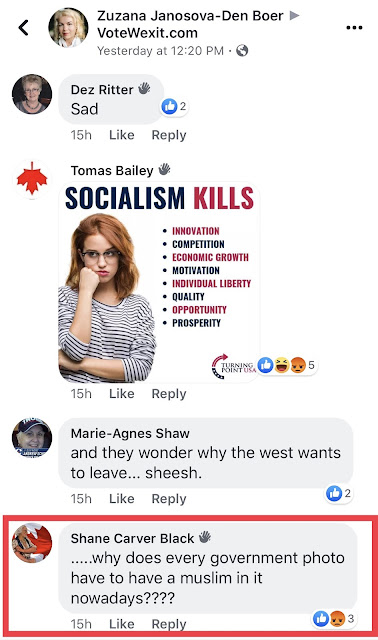 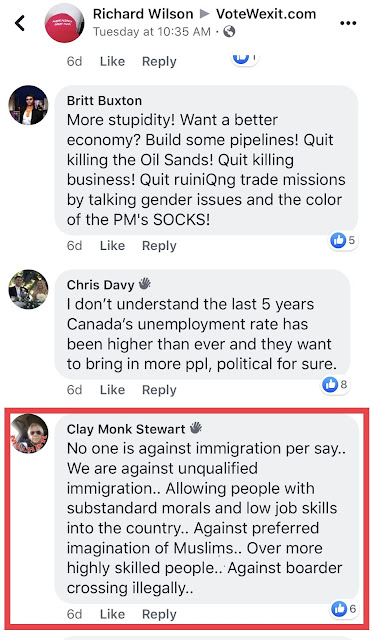 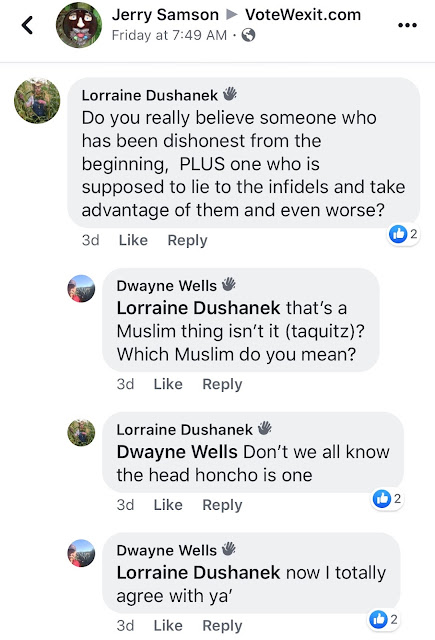 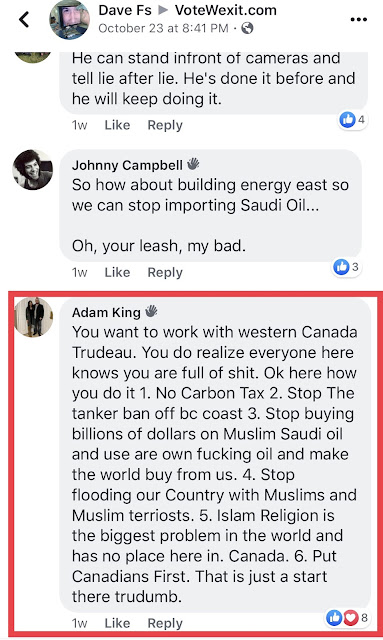 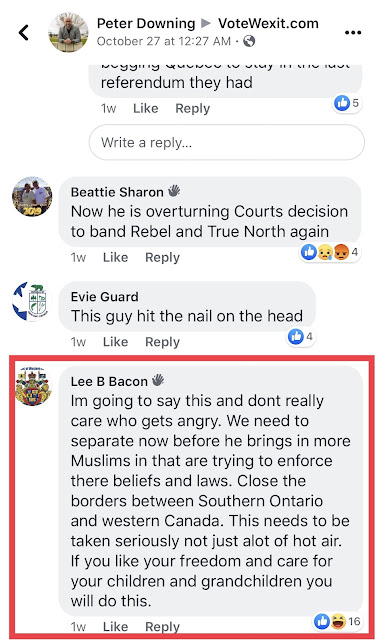 Downing - the presumed leader of a fledgling political party - has shown some of his own biases.


He’s come to the separation movement after a stint in other roles. He was an RCMP officer, but left the force in the years following a conditional discharge for uttering threats against his ex-wife in a December 2009 confrontation. Court documents say his ex-wife alleged he cut his hand punching a fan and wrote “bitch” or “something like that” on the bedspread in blood, before threatening to throw her out the window; Downing denied the accusations at the time. 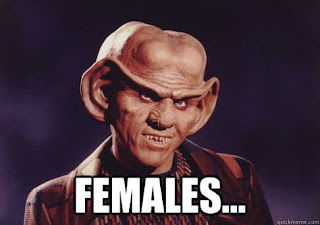 Wexit is shaping up to be the next Yellow Vests Canada, a far-right populist movement that's rooted in xenophobia but couched in narrative about (legitimate) economic concerns and the good of the "real Canadians." Supporters of YVC often tell us that the problems are just “a few bad apples,” however they often conveniently omit the rest of that adage - those rotten apples spoil the bunch.