Iron March Leak: User "New Canadian Empire" Attempted to Forge Alliances With Canadian Fascists; Had Political Ambitions; Claims to Have Been in Army

NOTE: If the screen shots in this article are too small to read, please right click and open in a new tab. You can then size the image appropriately. We will also be pulling data and screen shots from three distinct databases which will account for the stylistic differences of the images posted.

Last month, the gift of a massive leak of the now defunct internet forum Iron March, where Atomwaffen Division was formed, provided researchers with a treasure trove of material. This is the third in a series of articles covering the Iron March data leak.

Read the first two articles in our series here: 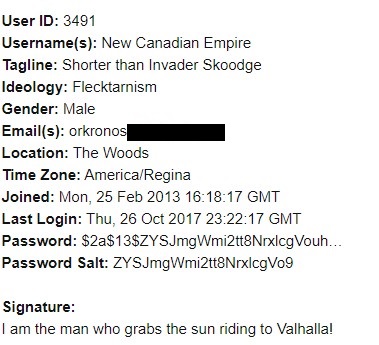 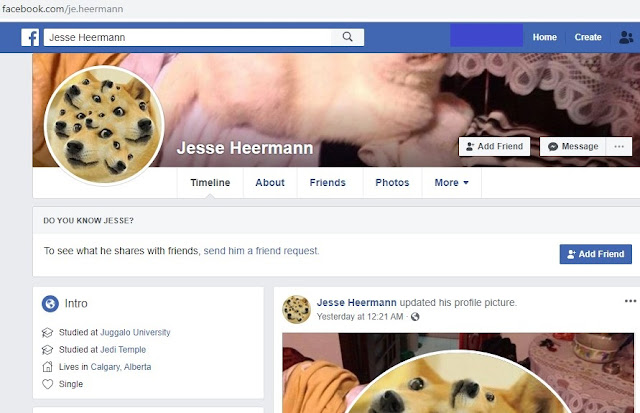 Jesse is an interesting guy. He claims he used to be a communist, and that he was in the process of joining Mensa.

In his earlier days in Iron March, he was very interested in starting a political party and moving to Alberta, from the North Battleford area of Saskatchewan.

Haselmire also connected with Dimitri Balitsky , aka "Vlad Astrius." Balitsky was apparently connected to Students for Western Civilization, along with the Yellow Vests Canada main Facebook group admin, Marc Tyler Malenfant, in addition to starting his own hate groups such as the Fatherland Front and Regnum Arya.

It seems he moved from Saskatchewan to Alberta some time between May and September, 2013 , and wasn't entirely opposed to multiculturalism:

He did return to Saskatchewan, however, within the year:

Haselmire also conversed with other users, such as Emma Morgen Stocker, AKA "Bear":

And plotted who would die first when the revolution came:

What is of interest is that Haselmire claims to have served in the Army, though this is the only reference to it in his private messages:

In the early days, Haselmire referred to himself as "not particularly racist":

Haselmire was actively looking for people to connect with, and even organize book burnings, claiming "burning ideas is a short step away from burning people, and we would not have it any other way."

He also recruited for a new national fascist group he referred to as "Northern Front." This is important, as it shows his evolution from "not particularly racist" in October, 2014 to "planning for the inevitable global race war" in August, 2016.

Haselmire continued to recruit Canadian fascists for the "Northern Front."

At the same he was planning for the race war with Northern Front, Haselmire provided homemade weapons advice to Atomwaffen founder, Brandon Russell, aka "Odin."

Haselmire is friends on Facebook with a few interesting people, such as "Florian Geyer," who hosts the fascist podcast Mysterium Fasces. 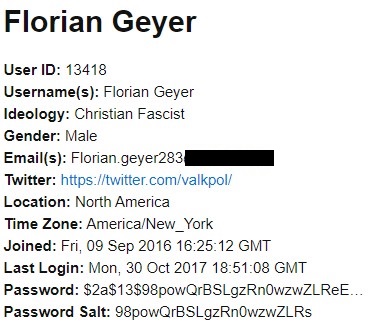 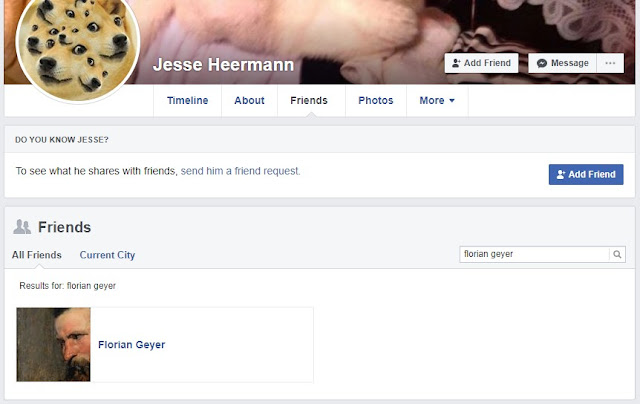 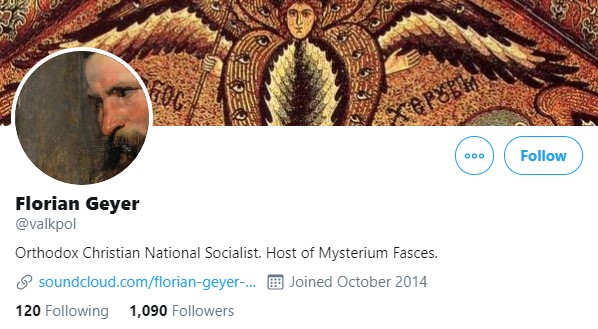 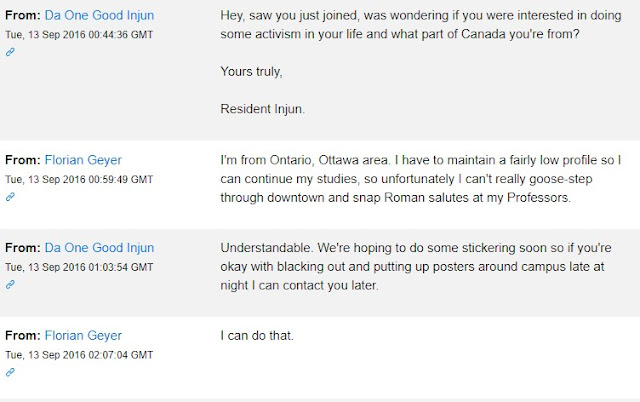 Haselmire is also friends with a Stuart King III: 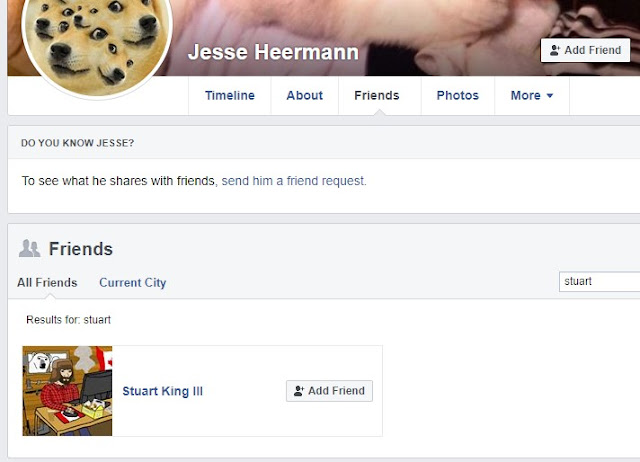 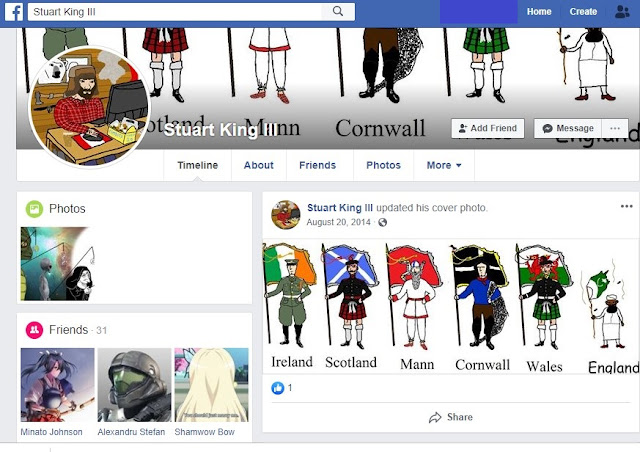 Why is Stuart King III interesting? Because he shares the exact same name as Iron March user "Rintrah": 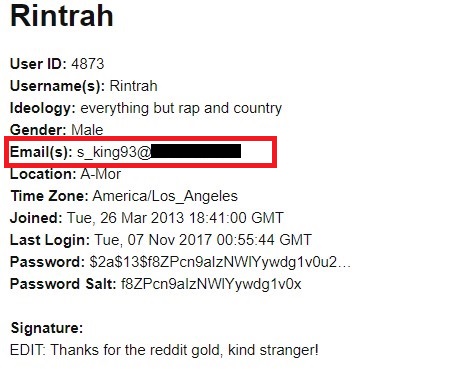 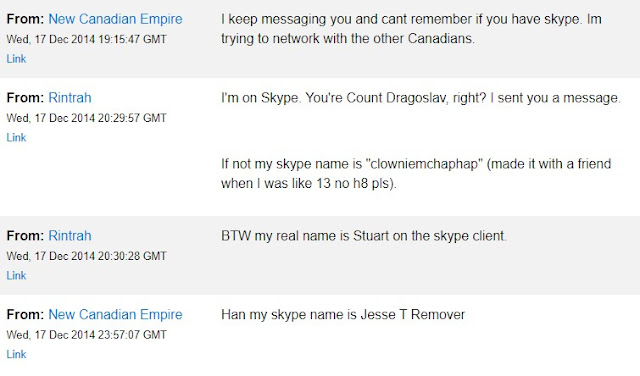 Stuart/Rintrah claims to be from Kelowna: 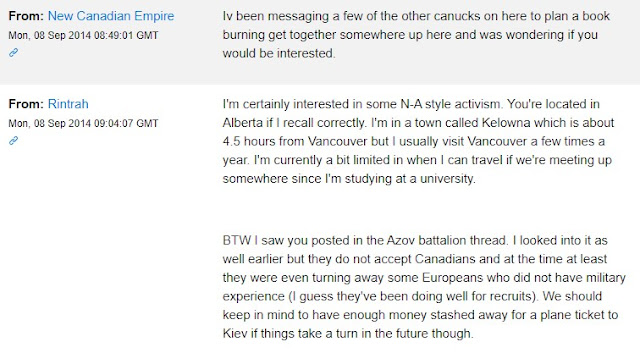 And he attempted to join Azov Battalion: 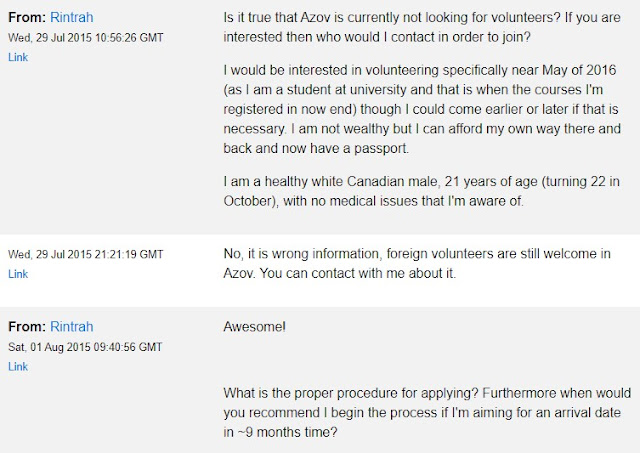 Stuart/Rintrah was also someone that Brandon Russell (aka Odin, leader of AWD) confided in about his problems with women: 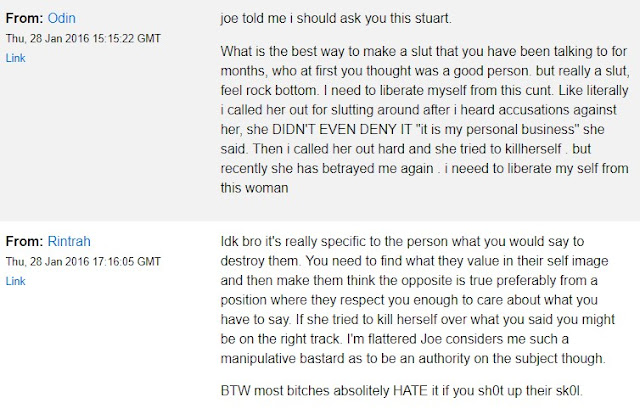 Stuart King III is friends with Lindsay Souvannarath, one of the three responsible for plotting the Halifax Mall shooting, and went by the username "With Hate As My Sword" on Iron March. 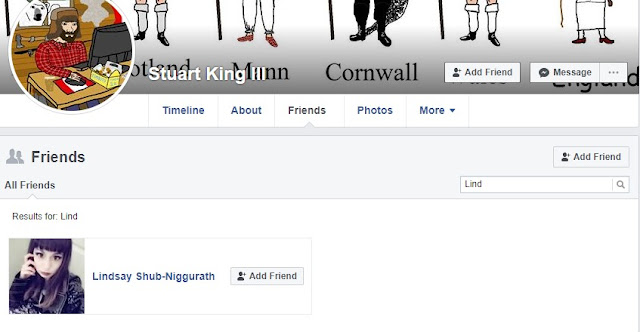 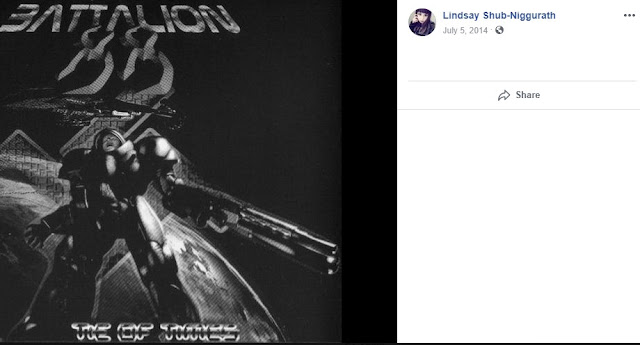 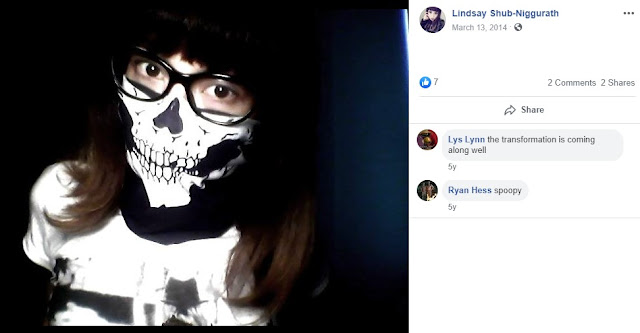 On Iron March, Rintrah links to this is his Steam profile:

Back to Haselmire, his Facebook is surprisingly open for a Mensa-qualified fascist. 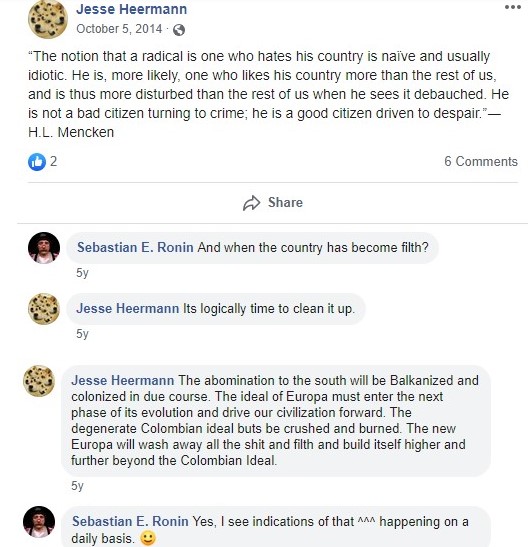 Yes, that is Sebastian Ronin. Ronin is the founder of the "Renaissance Party of North America," and has organized protests in Toronto, attended by Paul Fromm and Heritage Front member Louis Morin. Ronin also admires Anders Breivik, and was very enthusiastic about Dylan Roof. 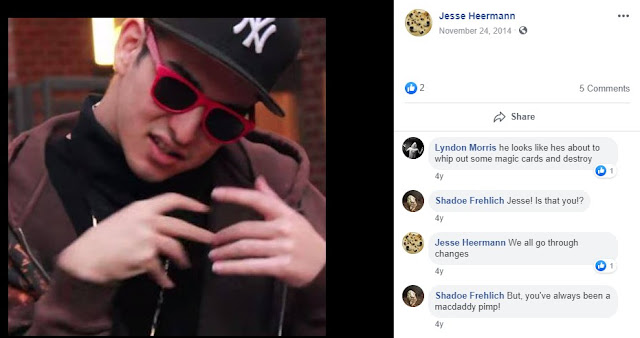 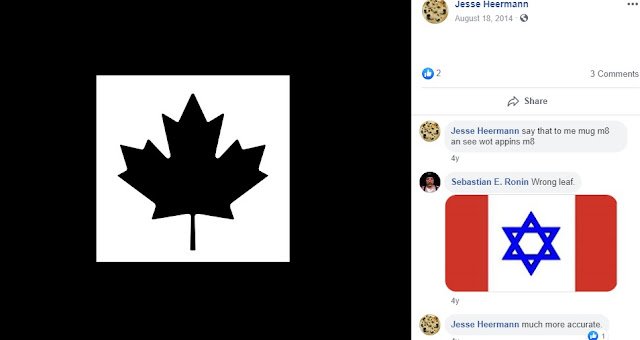 Haselmire tagged a person named "Hal" in many of his posts. Based on the Iron March leaks, it appears that this individual went by the username "昭五式." 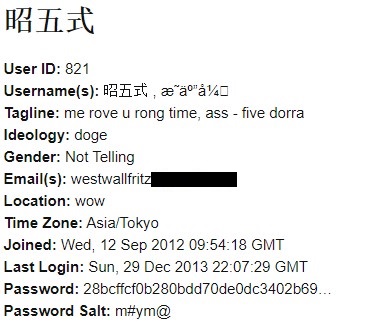 The numerous tags of "Hal" indicate they regularly changed their last name. That profile has since been deleted. 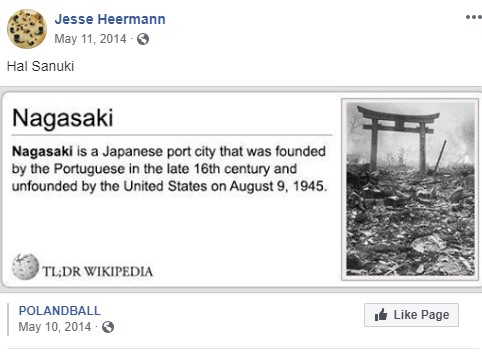 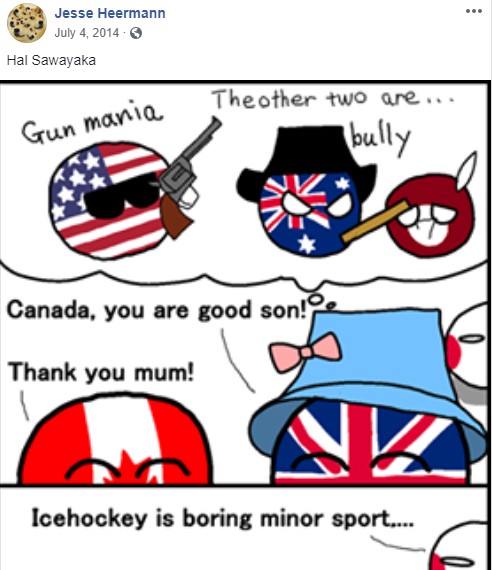 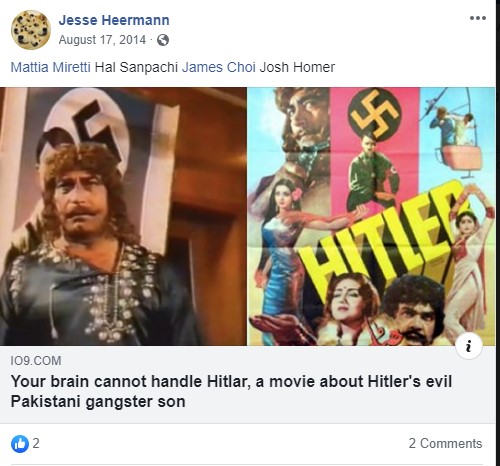 Nice to meet you, Jesse and Stuart.

Stay tuned for further articles on the Iron March Leak.

UPDATE: Since we published, we've been contacted by Iron March user BuzzStomper, who is featured in some screenshots above. BuzzStomper wasn't particularly active, and was active for a brief time. He shared his story with us - how he fell in with fascism, and how he left the ideology and how he is trying to make amends and find redemption.

We believe him, and we've agreed to publish his story here. One point he made that we feel is absolutely critical to understand is this - "...the problem with those fascist asshats is they are good with making unwanted kids feel like they have a place in society."


The story starts like this. I was either 16 or 17 drop out from high school. I was trying to find a place in the world as most kids do. One of my buddies from growing up suggested that I turn to "fascism" as if I didn't have anything else, <at least> I had my race. So I joined the now defunct forum Iron March. I posted that I was from Manitoba, and then not to long after New Canadian Empire reached out to me to see if I'd join a skype group. Me feeling like I found a group of friends, I gave them my skype. I joined the skype group.

The skype group was your ordinary hate group, talking about what was the best camo for certain areas, and one day I realized just what I had gotten myself into and signed out of skype and never logged back in. I looked at myself and thought "life is too short to be so hateful, and what is the point of being bias to people because of skin." It was just a dumb way to look at life and live.

Since I've left the ideology I've just been trying to live my life the best I possibly can, and trying to redeem my actions and my former ideology as just being the nicest person I can be. Now I am an adult and fully see that fascism is a dead ideology and it's best left that way.

I want other down and out kids to realize that it's not the greener pasture people make it out to be.

This video has been shared on ARC before, but we feel it's important to share it again. This movement preys on young people looking for a place to belong, and it ruins lives.