We've been spending a great deal of time trying to dig up who MOONLORD is. For the background please take a look at the story we published earlier this month:


The hunt appears to be over now thanks to the good folks at Unicorn Riot:

Here he is accepting a promotion: 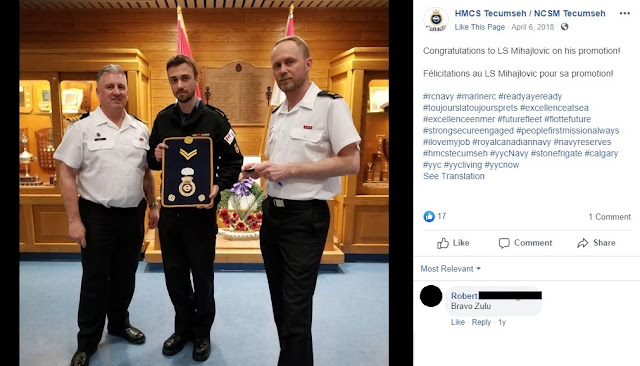 If we receive more information it will be posted here.

ARC is still working on identifying other members of the Iron March forums. That information will also be published soon.

We have a few more people we've been able to identify.

In the meantime big shout out to Unicorn Riot for the incredible work!

The story we broke about the Canadian Armed Forces member of neo-Nazi terror groups arranging for a weapons deal in Bosnia has now been followed twice internationally. Where is the Canadian coverage? This is so, so important. https://t.co/xm7N6QyVRc
— Canadian Anti-Hate Network (@antihateca) November 15, 2019


.@UR_Ninja has identified MOONLORD, which us, @ARCCollective and @antihateca exposed earlier this month as a key member of the Iron March forum, ex-Blood and Honour, and who arranged black market weapons sale to a French neo-Nazi via the IM platform. https://t.co/qAVZwDb0ER
— Yellow Vests Canada Exposed (@VestsCanada) November 28, 2019