Don Cherry Gets Fired For Being a Racist; Reactionaries React

On Saturday long time hockey commentator Don Cherry went on a racist rant during his Coaches Corner segment on Hockey night in Canada:

You people … that come here, whatever it is, you love our way of life, you love our milk and honey, at least you can pay a couple bucks for a poppy or something like that...


The Canadian Broadcast Standards Council were so overwhelmed with complaints after his rant, they posted on their website that they were "exceeding the CBSC’s technical processing capacities."

Sportsnet promptly fired Cherry for these comments, and rightfully so. Cherry has a long history of using racist dog whistles and sharing right-wing political views, but this was one his more bigoted statements. 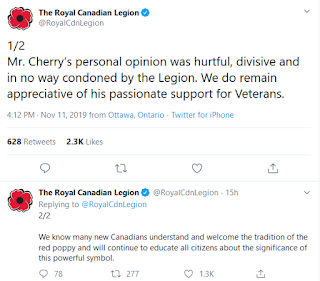 With the Legion not backing him you'd think that would be the end of this story, however the far-right are melting down about his firing and coming to his defense.

Members of the yellow vests, proud boys, neo-nazis, WCAI, C3, Northern Guard etc., have all spoken out in defense of Don Cherry. 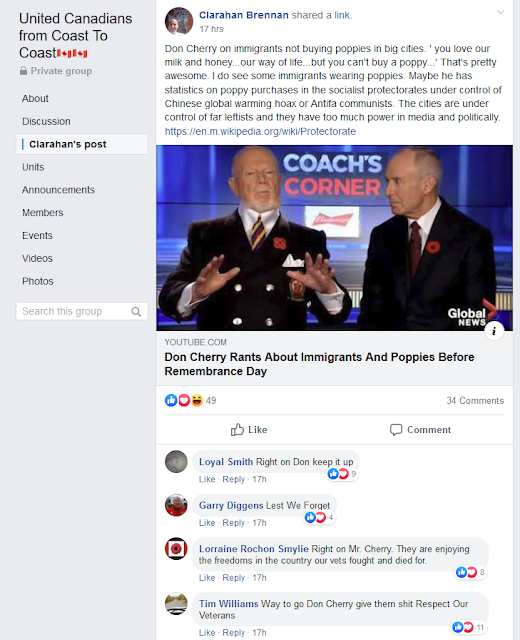 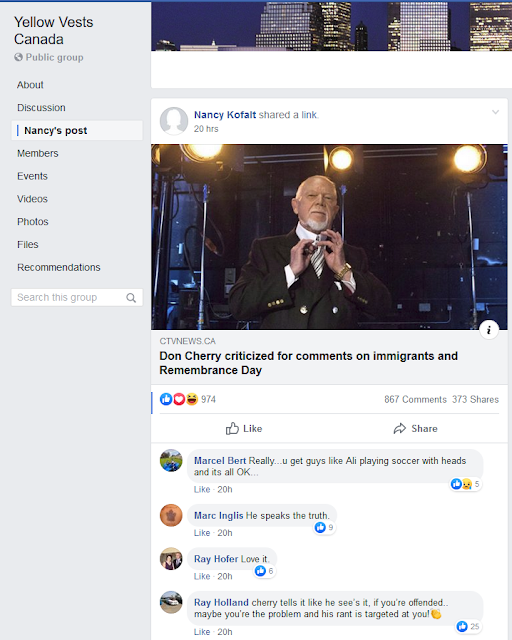 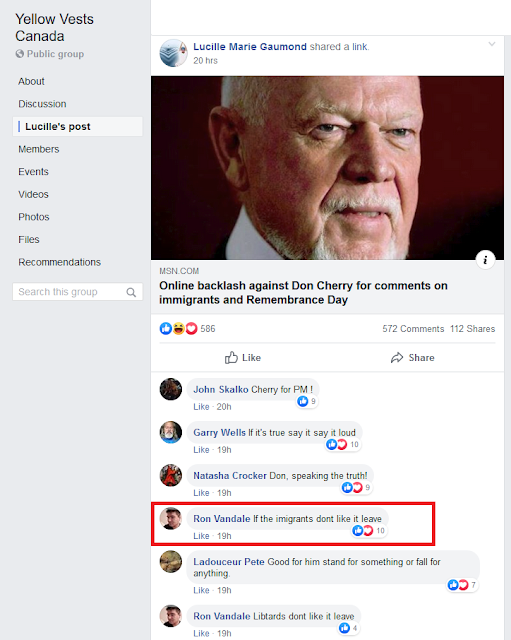 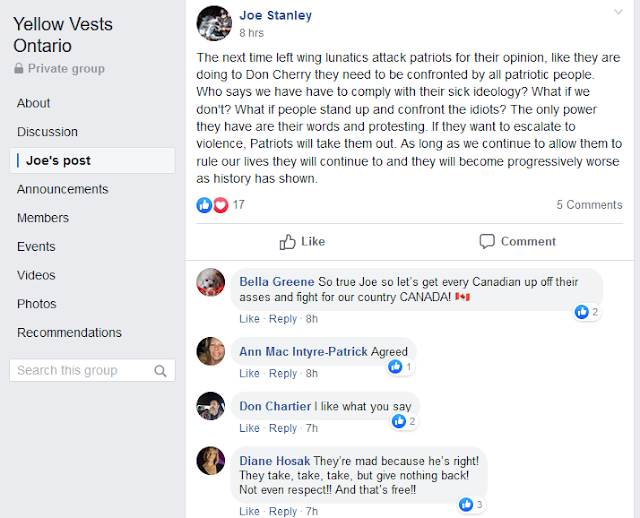 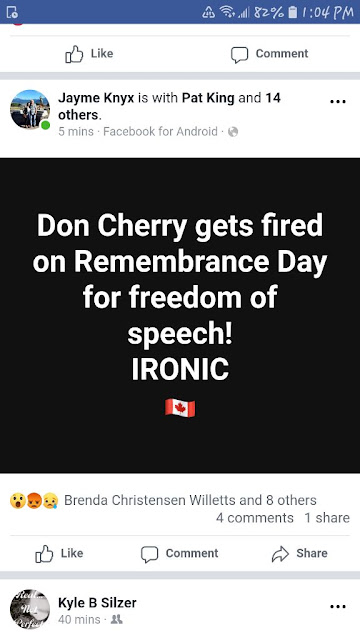 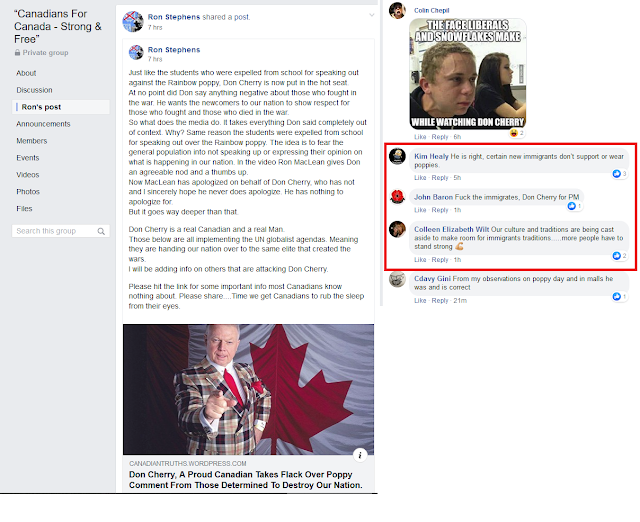 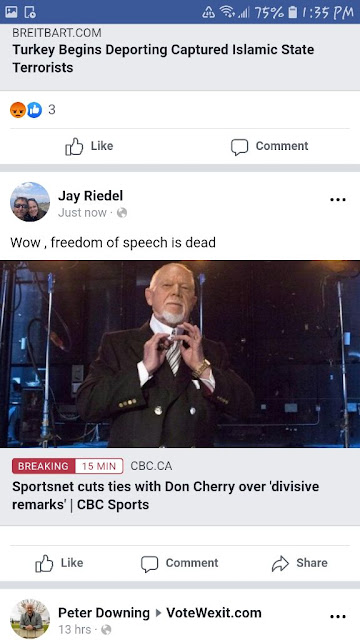 Oh, and of course that justified hateful comments made by the yellow vests:

And of course the comments are what you should expect. #YellowVestsCanadaIsAHateGroup pic.twitter.com/uRUJiBv5sD
— Yellow Vests Canada Exposed (@VestsCanada) November 11, 2019 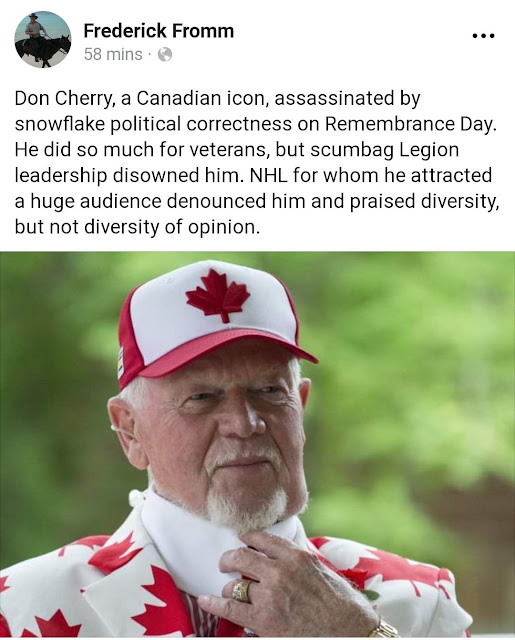 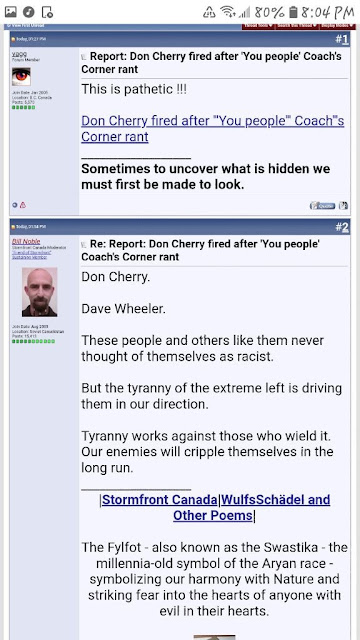 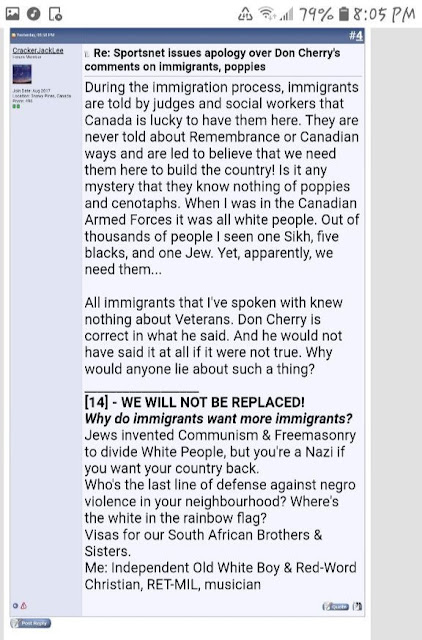 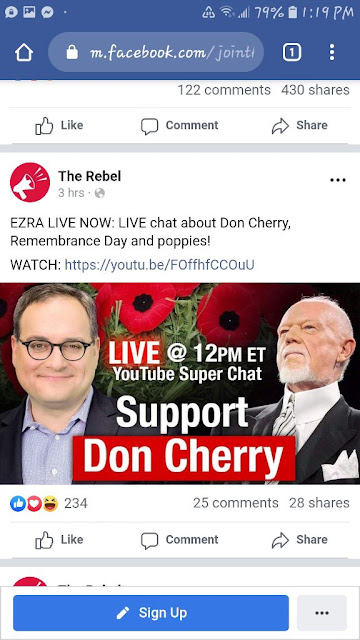 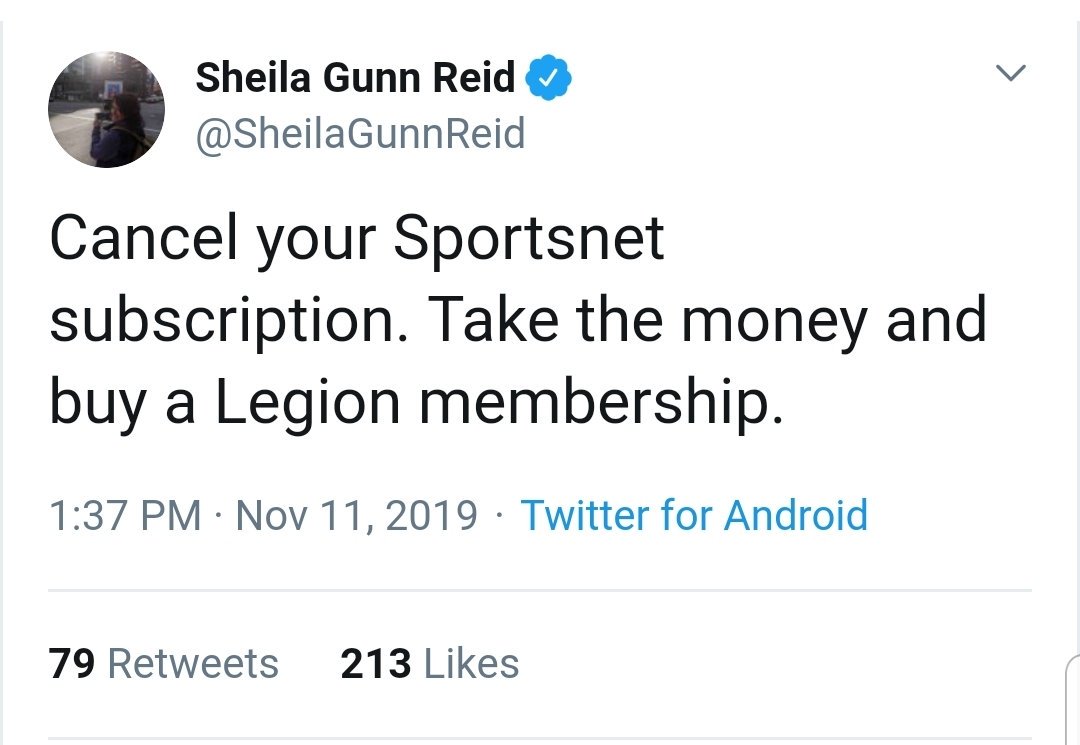 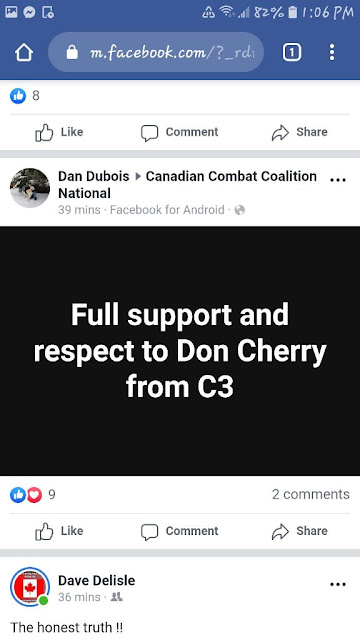 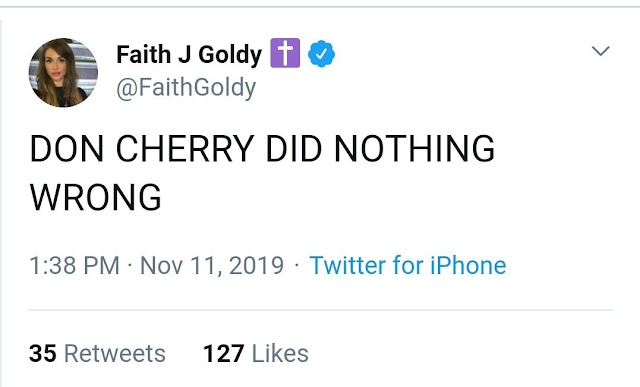 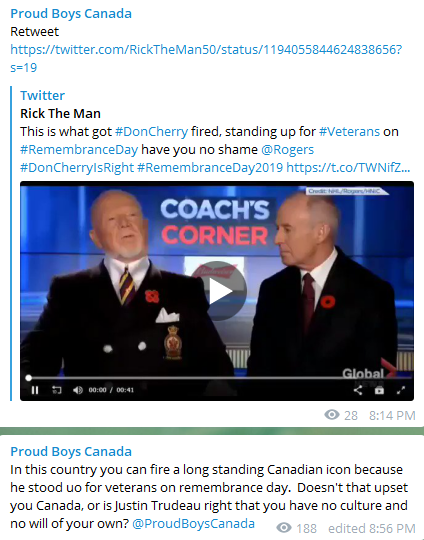 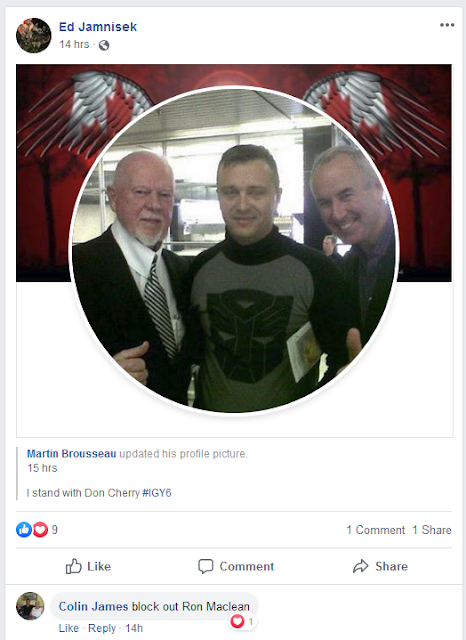 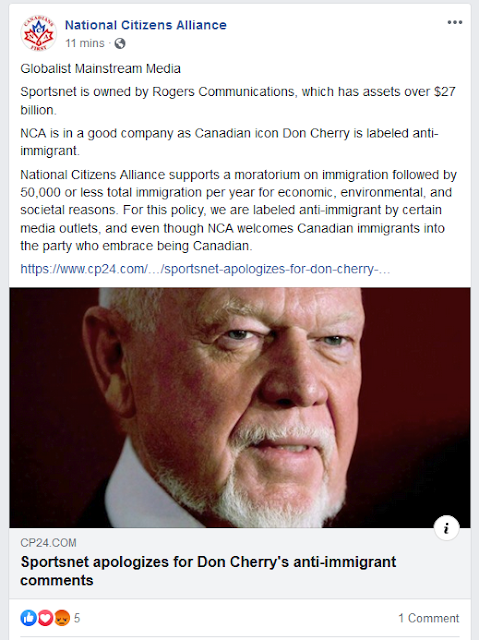 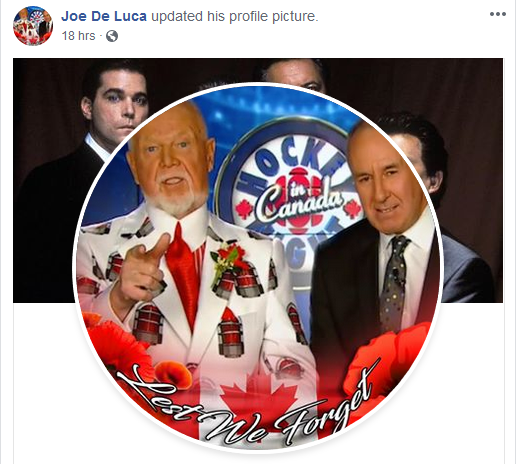 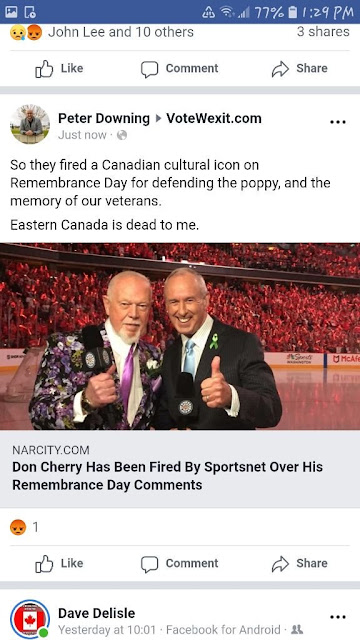 The list could really go on and on but one of the funniest responses was from neo-nazi Lily (last name unconfirmed) who wants to protest in front of the CBC, even though Sportsnet is owned by Roger's. 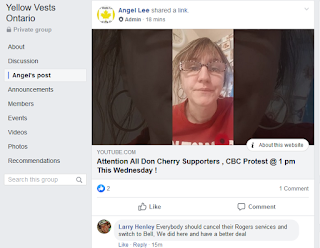 To top this all off, people have been tweeting at The Legion that they will no longer buy poppies going forward.That kind of flies in the face of their supposed patriotism, and undermines Don Cherry's promotion of the campaign.

Obviously being on the same side of an argument as the far-right does not necessarily mean a person is sympathetic to their cause, but I've noticed a few easily debunked arguments that I would like to draw attention to.

But it's OK when Trudeau wore blackface: It actually isn't. Justin Trudeau apologized and owned up to the mistakes he made. Don Cherry has made no such acknowledgement, and most likely won't.

Don Cherry was fired for using the words "you people": This one is especially important because Don is himself saying this. He followed up "you people" with 'come to this country', so it's pretty obvious he was targeting supposed immigrants and that's why he was fired.

Don Cherry was fired for promoting poppies and Remembrance Day: He's been doing that for years. He was fired because he singled out immigrants.

I would love for this controversy to be over but sadly, I'm sure it will continue for a little while longer. What's really sad is that this story has completely overshadowed Remembrance Day, which many people actually do care about.

On another matter if I may, I saw a poster on Twitter who has proudly put three sets of parentheses around his name. It reminded me of Danes wearing yellow Stars of David en-masse after Nazis tried to single Jews out for persecution in the Second World War, or neighbours lighting Hanukkah menorahs in Whitefish Montana, I think it was, after an episode of Jew-hate. It might be too-soon to propose that antira adopt the parentheses, but it would be an effective antidote to Jew-hate by haters who employ this tactic.