The Hypocrisy of Faith Goldy

During the past few weeks south of the border a number of state governments controlled by Republicans have passed and signed into law increasingly regressive restrictions on reproductive rights in a rather transparent effort to challenge and ultimately overturn the right of women to choose to end a pregnancy. All of these anti-abortion bills have been terrible, however the worst is probably that which was passed in Alabama as it doesn't even consider rape and/or incest as a mitigating factor.

None of these laws are currently enforceable by the way.

The Alabama legislation is so bad that even the likes of Pat Robertson thinks it is extreme. Others on the right have also come out in tepid opposition: 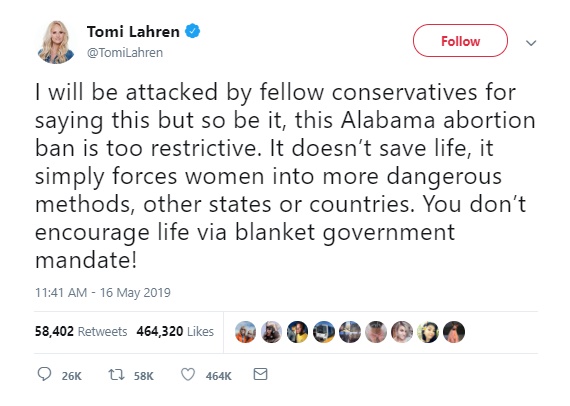 That Ann Coulter's mini-me Tomi Lahren came out in opposition to the Alabama abortion ban isn't entirely surprising since reproductive choice is one of the very, very, few instances where she holds a moderate position. This post did give at least one individual frequently featured on the blog an opportunity to trumpet her own ideological and religious purity however: 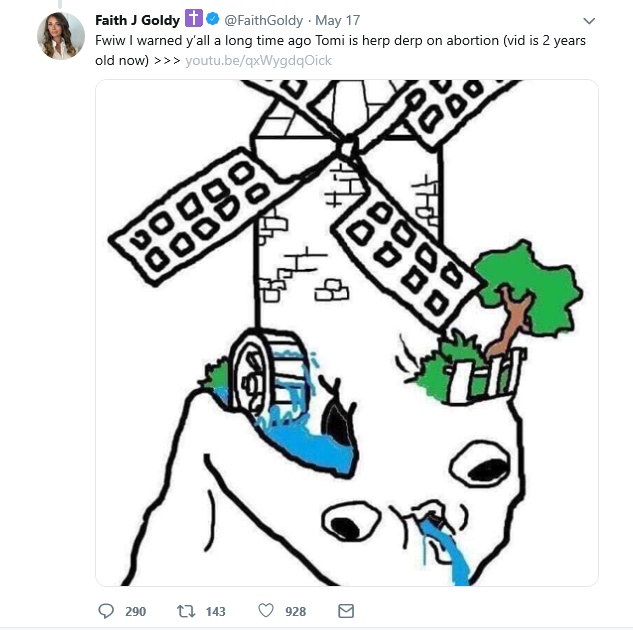 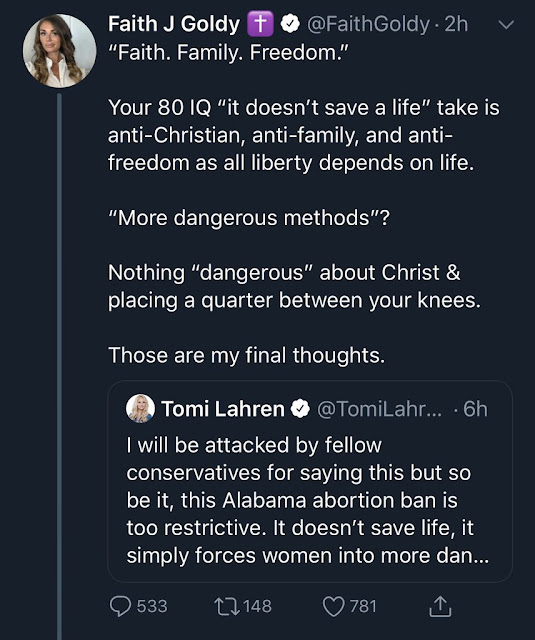 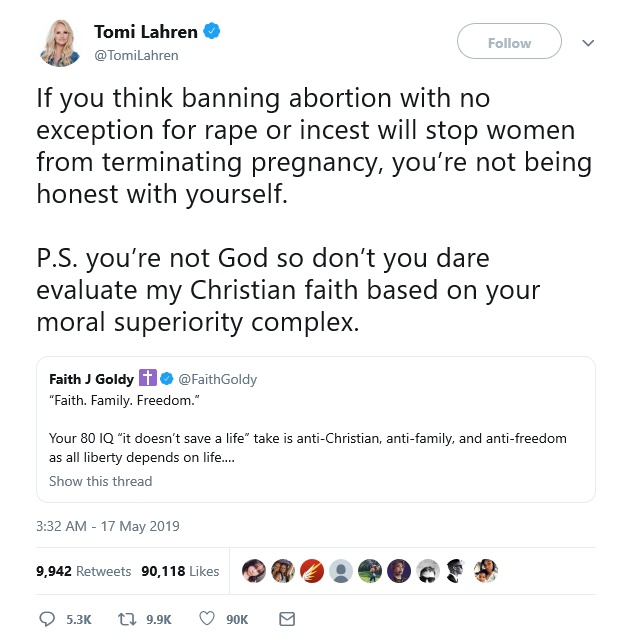 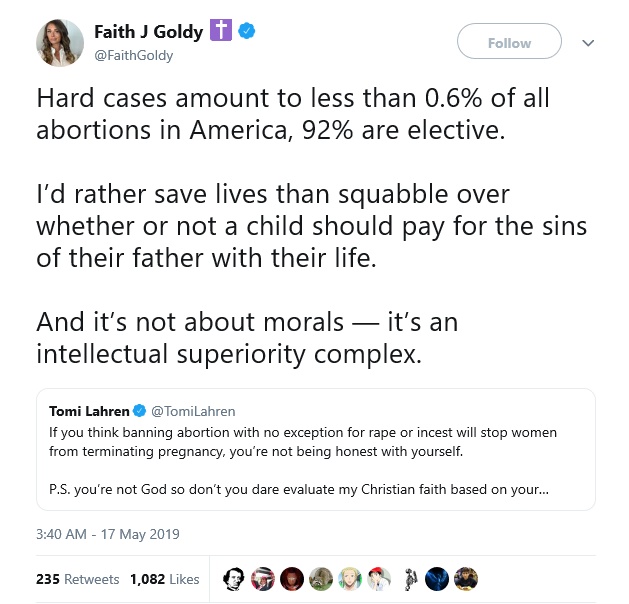 I believe the folks on the right call this "virtue signaling":

But then something rather interesting occurred in the thread someone called Goldy out: 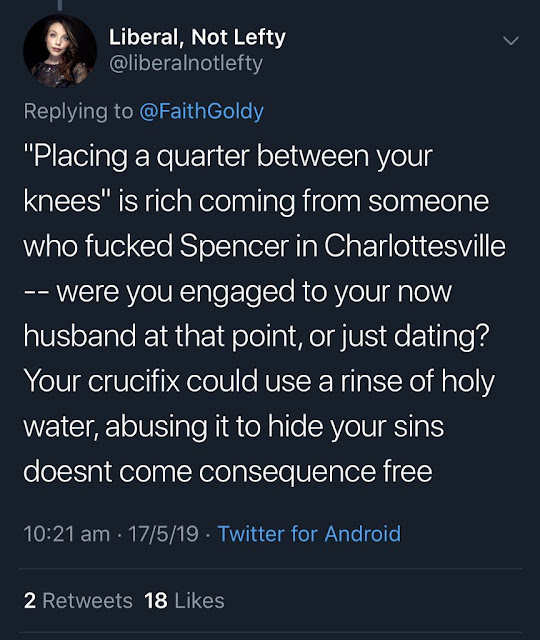 The events of Charlottesville have been discussed on this blog and elsewhere paying some attention to Goldy's participation in the event: 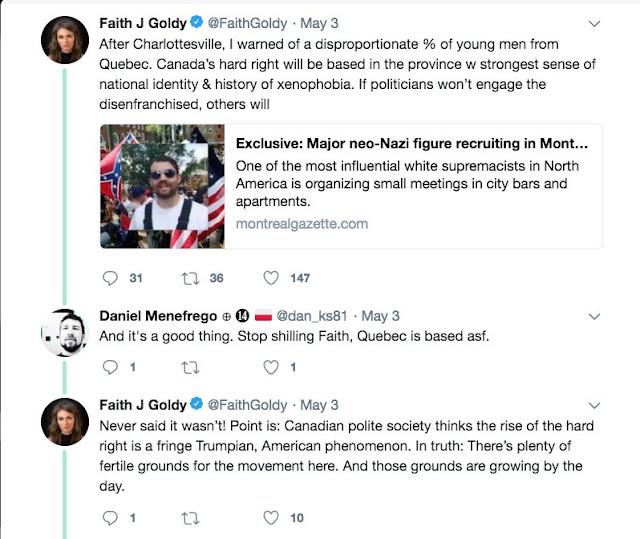 Ultimately Goldy was fired from "The Rebel" when even Ezra Levant decided her biased reporting (too biased even for "The Rebel" which is really saying something) and her participation on a neo-Nazi podcast was a bridge too far. In fact it seems that Levant had implied that Goldy had engaged in what would be incredibly unethical behavior with one of the subjects of her "reporting': 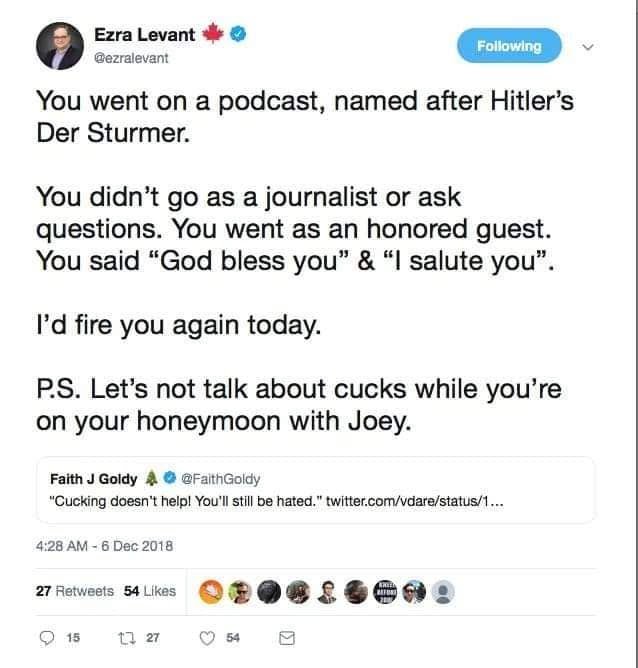 The women posting on Twitter as "Liberal, Not Lefty" appears to be a friend of Megan Bobonick. This is significant since Bobonick claims to be engaged to alt-right toad Richard Spencer: 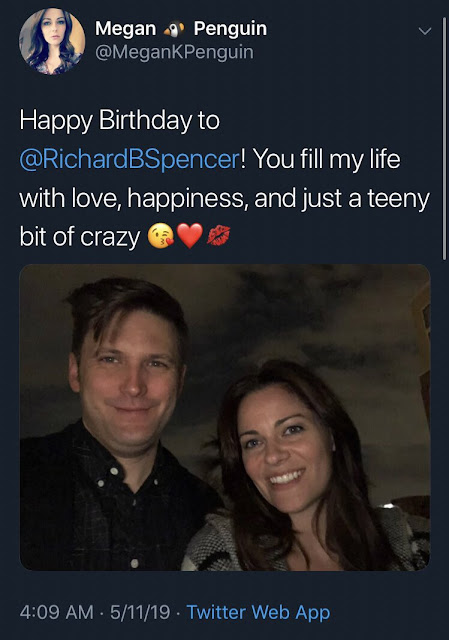 Rather than extinguish this particular fire, Bobonick threw gasoline on the flames: 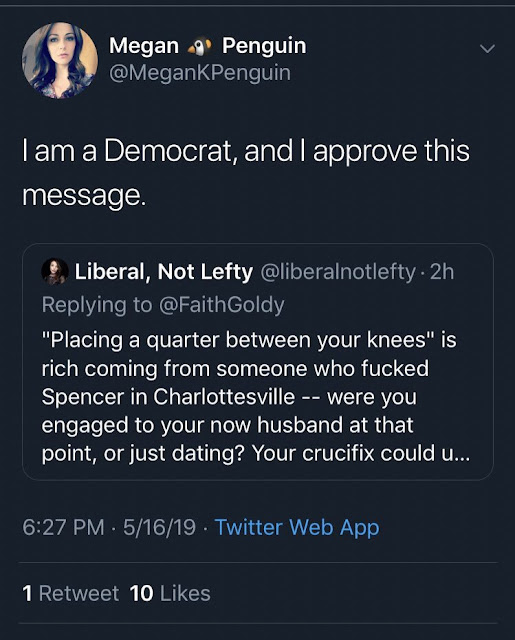 Now, I truly don't give a damn about Goldy's or anyone else's sex life (still, Richard Spencer?!? Ew!). What I do care about is the puritanical, holier than though hypocrisy of people like Goldy who rail against what they claim to be sexual deviance and the need for some sort of state regulation (i.e. restrictions on abortion and contraception, legal rights for LGBTQ, etc)....

also included are a bunch of tweets with Richard Spencer's girlfriend confirming Faith Goldy fucked him in Charlottesville behind her fiancés back. 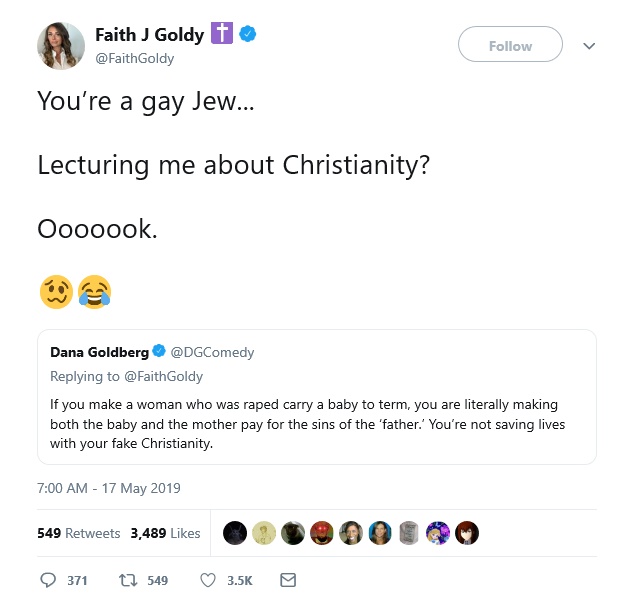 .... often privately engaging in the same acts that they condemn publicly.
It is also rather tiresome when people like Goldy hold promote themselves as guardians of the faith they publicly embrace by cherry picking verses, often out of context, to endorse the bigoted views they already had.... 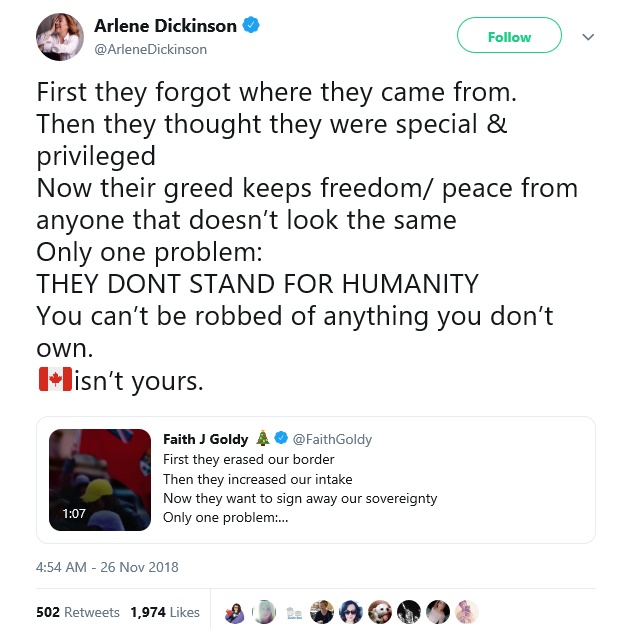 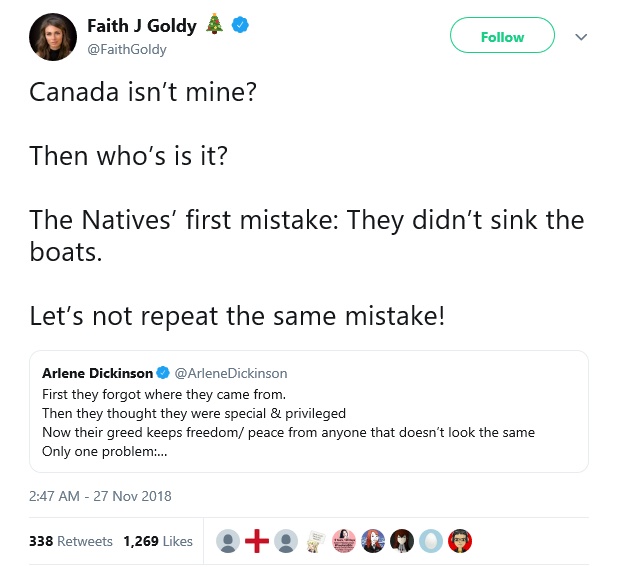 *Ahem*
"When a foreigner resides among you in your land, don't mistreat them. The foreigner residing among you must be treated as your native-born. Love them as yourself, for you were foreigners in Egypt. I'm the Lord your God."

.... while ignoring those teaching that counter the narrative you've embraced:

Hebrews 13:2 KJV: "Be not forgetful to entertain strangers: for thereby some have entertained angels unawares."
— Jon Olfert (@canuckfreezeray) May 21, 2019

"...and give them compassion before them who carried them captive, that they may have compassion on them." 1 Kings 8:50 KJV
— Jon Olfert (@canuckfreezeray) May 21, 2019

Deut. 24:14 KJV: "Thou shalt not oppress an hired servant that is poor and needy, whether he be of thy brethren, or of thy strangers that are in thy land within thy gates."
— Jon Olfert (@canuckfreezeray) May 21, 2019

Luke 6:38 KJV: "Give, and it shall be given unto you; good measure, pressed down, and shaken together, and running over, shall men give into your bosom. For with the same measure that ye mete withal it shall be measured to you again."
— Jon Olfert (@canuckfreezeray) May 21, 2019

Romans 13:9 KJV: "...and if there be any other commandment, it is briefly comprehended in this saying, namely, Thou shalt love thy neighbour as thyself."
— Jon Olfert (@canuckfreezeray) May 21, 2019

The appeal to faith and some sort of higher morality is all a part of Goldy's grift.

I don't think she believes a word of any of it herself.
Posted by Nosferatu200 at 22:23