Between 2008 and 2013, ARC published a series of articles detailing Mar Lemire's racist past and his involvement with the Heritage Front. I compiled all of the links on this single page:


It has been more than six years since I've added to this series of article that highlighted the history of Marc Lemire's involvement with and eventual leadership of the Heritage Front. When I posted the last few articles I sort of felt like I was beating a dead horse so whenever I had heard of Lemire's name come up in my investigations, such as his participation in the memorials of lawyers Doug Christie and more recently Barbara Kulaszka I either briefly discussed his involvement or ignored it all together.


I had assumed there was no further use in covering Lemire since I believed he was of no particular significance any longer.

That turned out to have been a mistake on my part, but it is a mistake that journalists such as Mack Lamoureux has rectified:


His existence at the city was a quiet one with odd things like his outgoing message being his extension number not his name. Several days after I first contacted him on his work phone, his extension was taken out of service. The city would not confirm or deny that he worked there
— Mack Lamoureux (@MackLamoureux) May 8, 2019

A source told us that Lemire would have had back access to city employees data, something that worried @MatthewGreenNDP, Hamilton's first POC city councillor.

Green told us he was disgusted he didn’t know about this. pic.twitter.com/zyO03ZBeJG
— Mack Lamoureux (@MackLamoureux) May 8, 2019

For my American followers this would kinda be like uh... if Philadelphia had Don Black (of Stormfront fame) in their IT department. https://t.co/17FOqPMNJQ
— Mack Lamoureux (@MackLamoureux) May 8, 2019

Those articles on Lemire that I thought of as overkill I'm happy to say helped Mr. Lamouroeux in his research so I sort of feel a bit vindicated in having written them, but full credit to Mack for his dogged work.

I know there was another journalist who had been working on this story as well but she appears to have been stymied by the City of Hamilton for some reason which no doubt will result in a great deal of interesting speculation:

I did an FOI recently asking for any email correspondence containing the words "Marc Lemire" combined the words "Heritage Front," "neo-Nazi" & other terms. I'm looking for the response I got right now. Needless to say, it didn't turn up what I was looking for
— Samantha Craggs 🦉 (@SamCraggsCBC) May 8, 2019

Lemire's extension was never available in the city's dial-by-name directory. It always required going directly to a human being, who would connect you
— Samantha Craggs 🦉 (@SamCraggsCBC) May 8, 2019

However, Ms. Craggs was able to get Lemire to speak about his involvement with the Heritage Front after the publication of the "Vice" article.
In news that will surprise no one who follow this blog, Lemire lied:


"The Heritage Front stuff dates back to when I was a teenager," Lemire said, linking to an article where he said he's not a Nazi or white supremacist.

"I reject the Heritage Front for what it was, as I have stated consistently for over 11 years."

But, as Vice reported, an archived web page from the Heritage Front's website from 2001 shows Lemire distributing flyers saying "immigration can kill" in Hamilton. A post on Lemire's own webpage from that same year also describes him as the "head honcho" of the organization.

ARC first published this a number of years ago:

When this was published on Lemire's website, he would have been 26 years old.

In fact Lemire hosted the Heritage Front on Freedom-Site from 1998 (age of 23) to roughly 2001 when he appears to have moved it to a separate server. Here is an example of one of those early Heritage Front websites (December 2000, I believe): 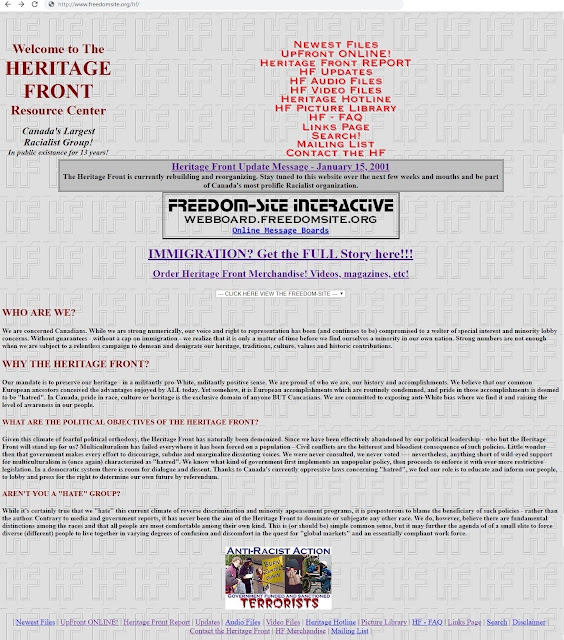 And here is the HF merchandise page where the hate group sold their magazine featuring former KKK leader David Duke and videos by the leader of White Aryan Resistance Tom Metzger: 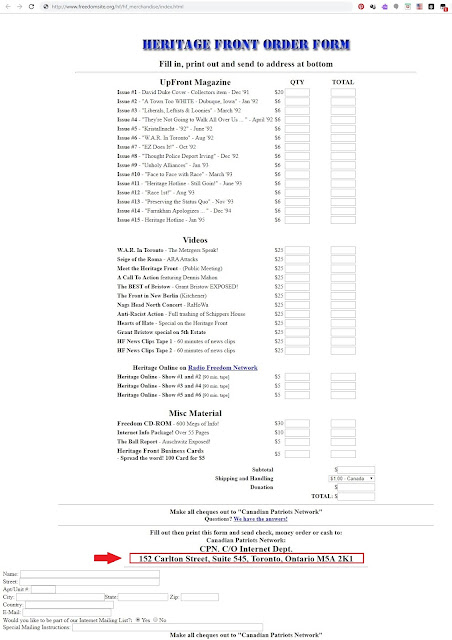 And here is a request for donations to keep Freedom-Site alive: 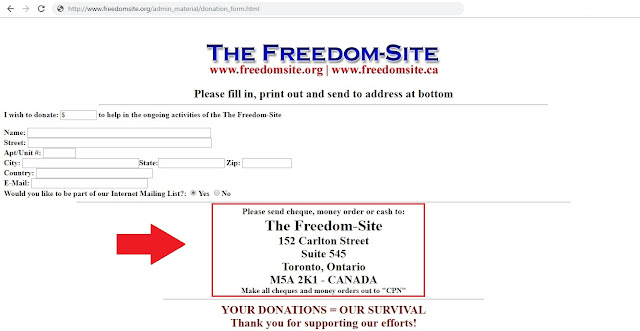 Curious isn't it? I mean, it would be amazing if one could link that address directly to Lemire, wouldn't it?

Oh! You mean he had a personal webpage? 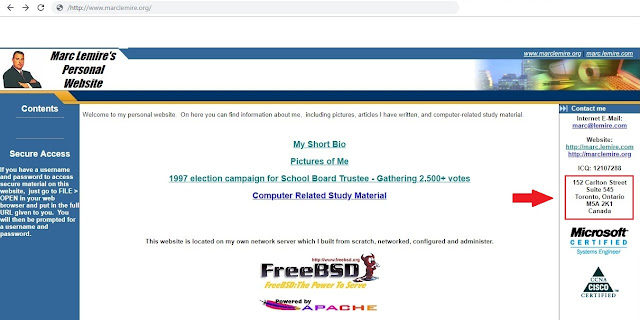 And by the way, here is one of the images of the Canadian Patriot Network Lemire designed: 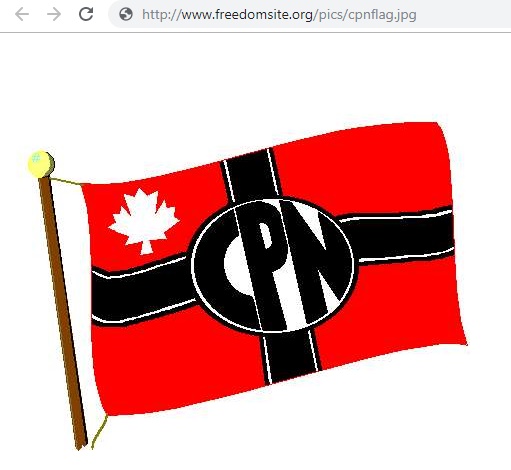 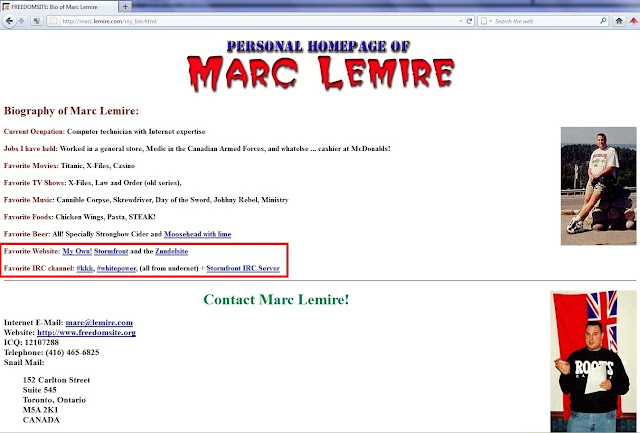 The reality is that Marc already tried to snow people regarding his past with the Heritage Front. In that case, he had a willing stooge in Ezra Levant who refused to challenge Lemire's claims because Levant also had an agenda:

Well, Lemire is right that he was involved with the Heritage Front as a teenager: 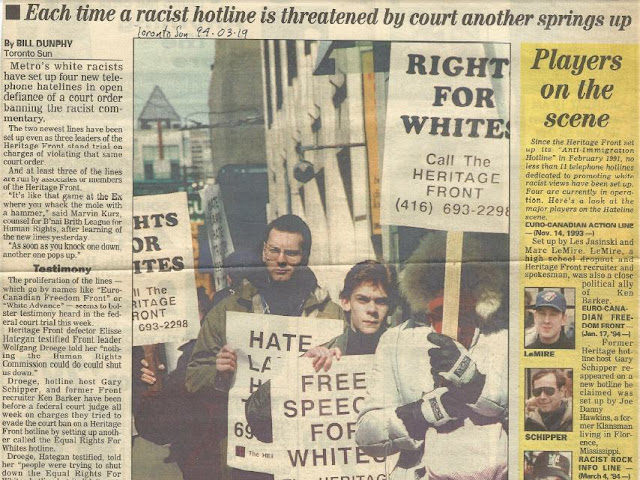 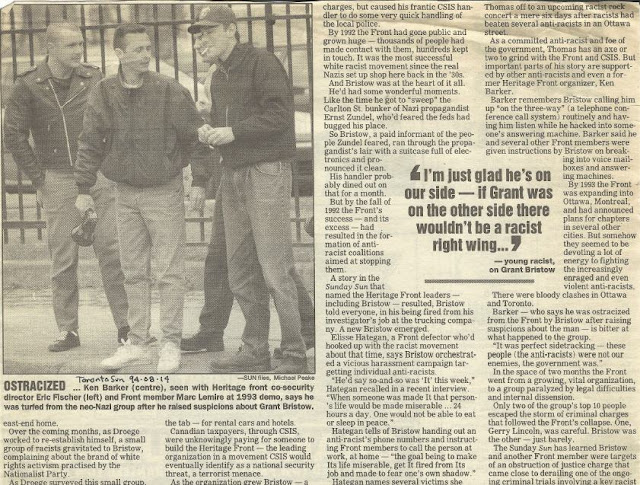 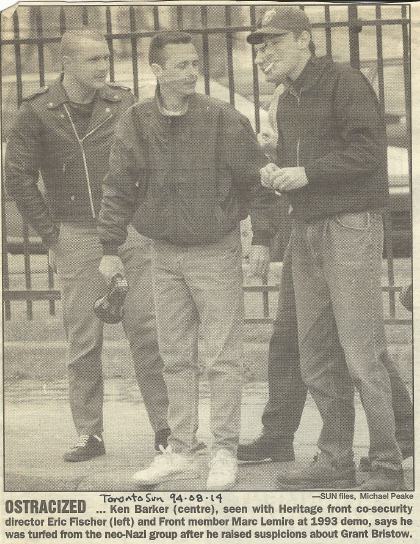 But he was also involved in his early 20s as he continued to count Wolfgang Droege as a friend: 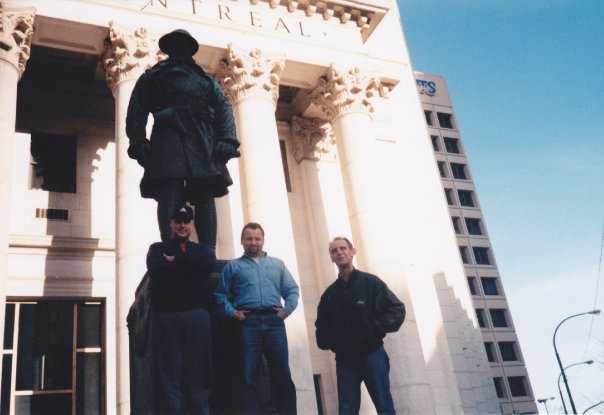 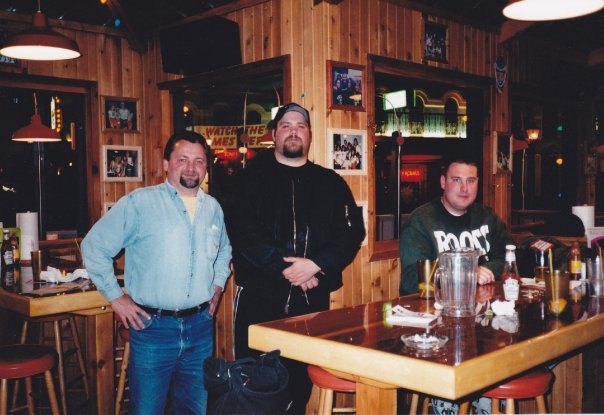 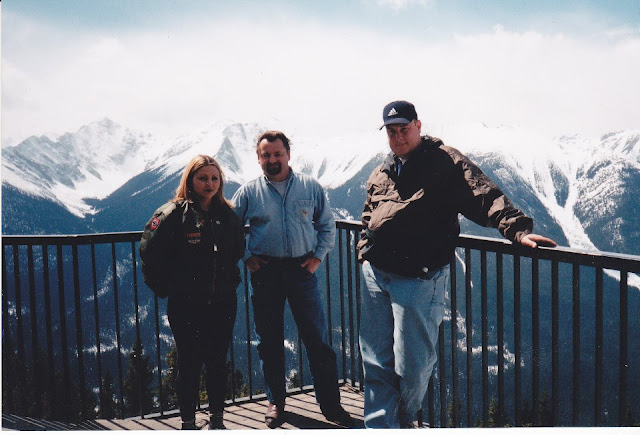 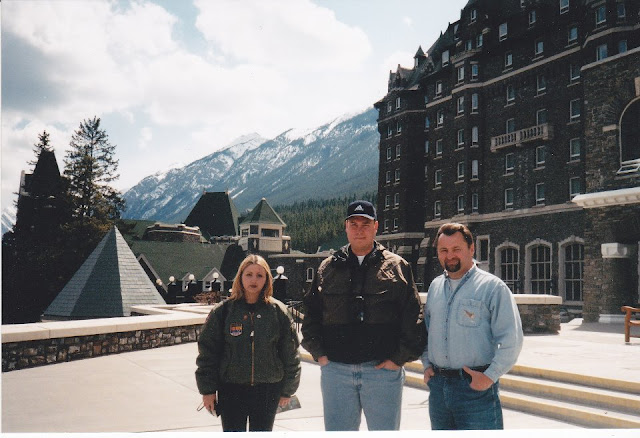 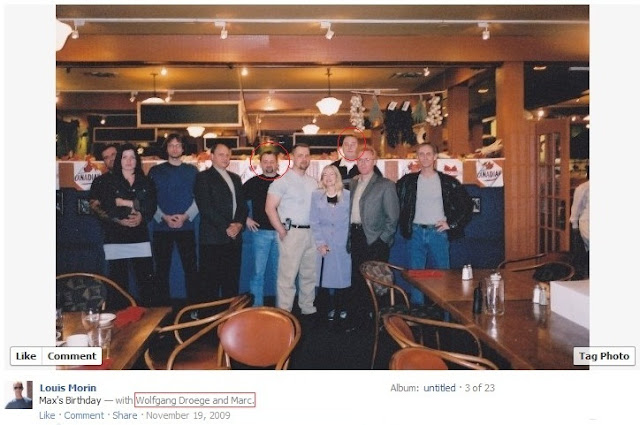 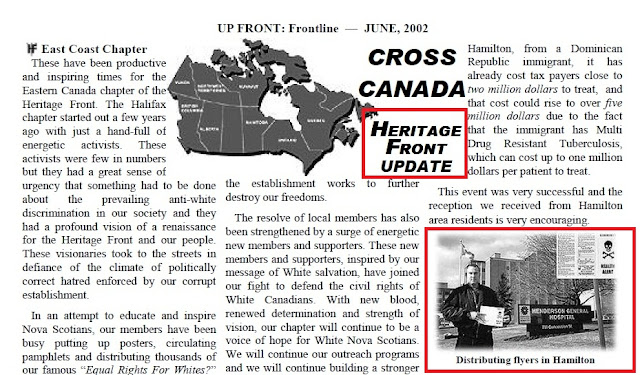 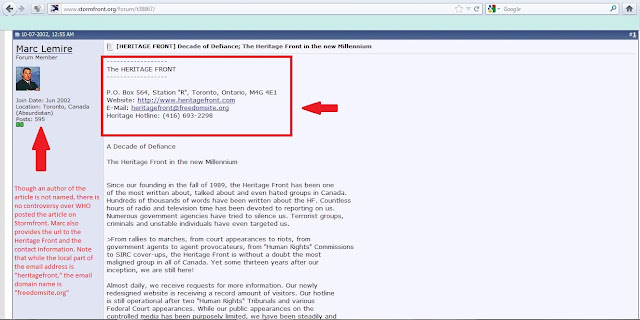 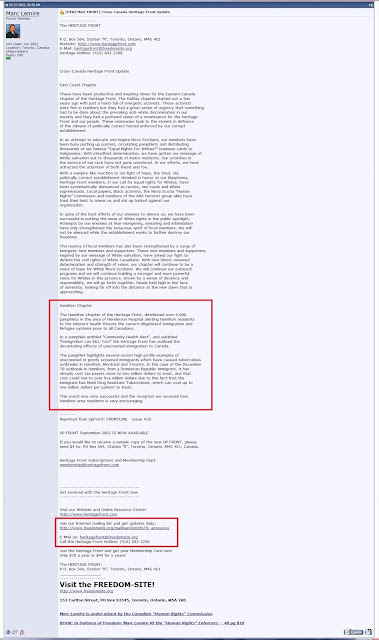 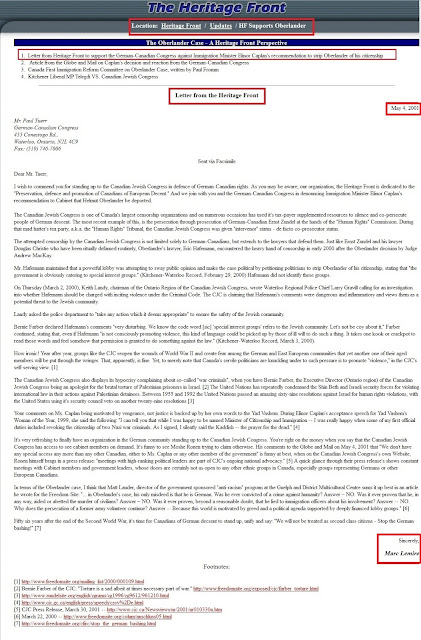 And there was his involvement when he was in his 30s: 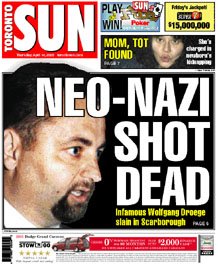 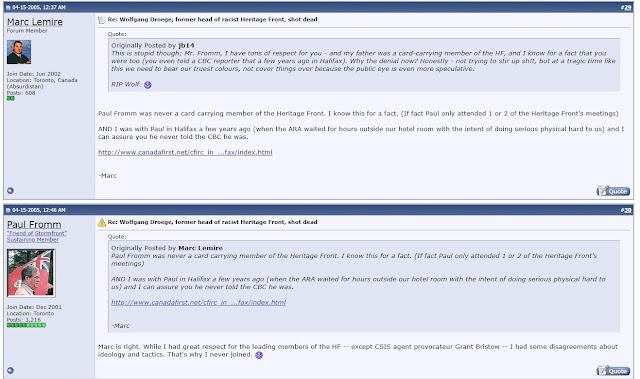 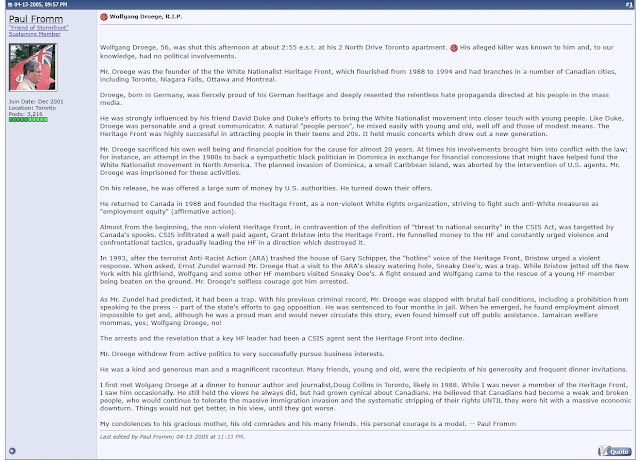 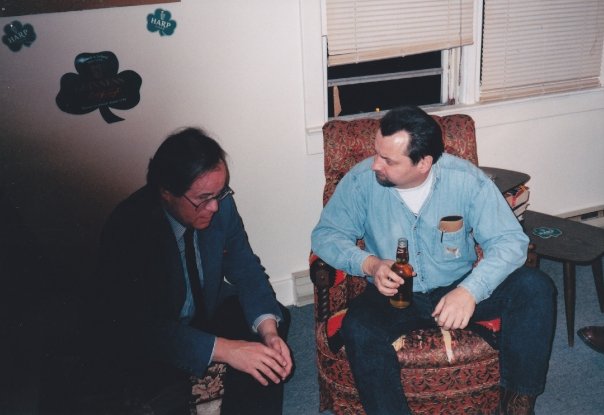 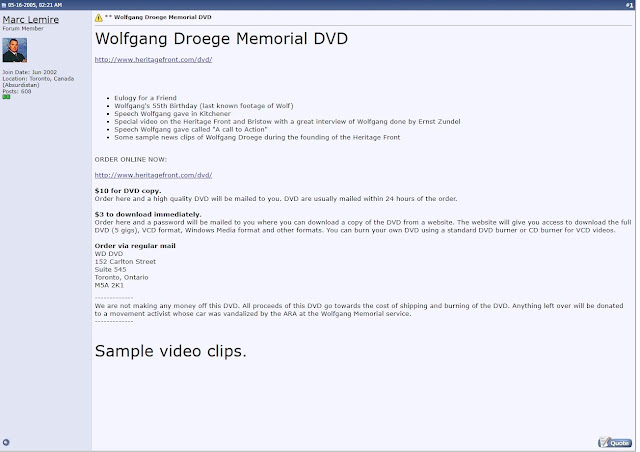 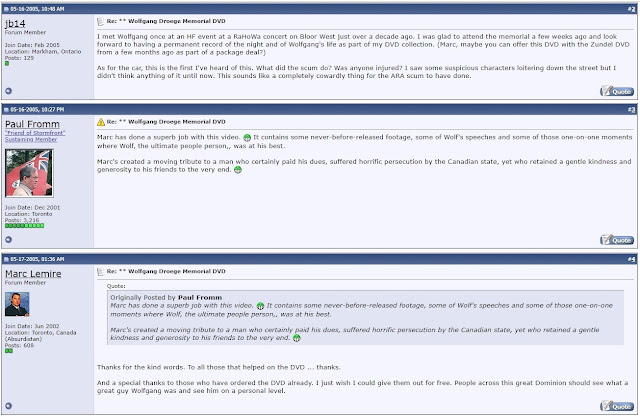 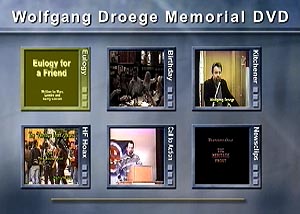 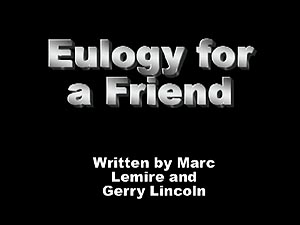 And there was his continued association with racists such as Tara Dribnenki, Nathan Touchette, and members of the Northern Alliance well into the late 2000s: 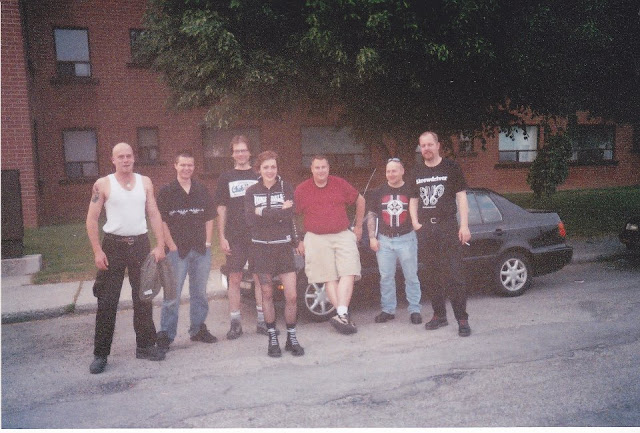 For somone who has made a living in tech, it is hard to believe that Lemire doesn't seem to realize that the Internet doesn't forget.

And in this case the repercussions are still to be determined:

The Executive Director of Human Resources Lora Fortana has been a key part of the City Manager's Office efforts to hide Marc Lemire's employment in City IT from the public. @MackLamoureux continues to dig, there will be more uncovered. #yhmcc #HamOnt https://t.co/BmEyE6eV1y
— Joey Coleman (@JoeyColeman) May 9, 2019

If you know something, say something - as government likes to say.
Contact @MackLamoureux with your tips on @cityofhamilton coverups. @vicecanada is willing to mount the legal defense of good journalism looking at the Hamilton City Manager's Office. #yhmcc #HamOnt
— Joey Coleman (@JoeyColeman) May 9, 2019

Hamilton's new city manager has promised a "very thorough investigation" into the employment of a former neo-Nazi leader in their IT department. https://t.co/hi8y8uH27I
— Mack Lamoureux (@MackLamoureux) May 9, 2019

The mayor of Hamilton's comments on former Heritage Front leader Marc Lemire being employed there for over a decade. https://t.co/1lSjLvfgOF
— Mack Lamoureux (@MackLamoureux) May 10, 2019