Who Is To Blame For Forest Fires? Apparently Muslims, Left-Wing Politicians, Environmentalists, and "Lazers"

It began in Constantinople -- well, to be fair it actually began somewhere along the silk road in Central Asia -- in 1347. By the time the Black Death had run its course between 1/3 and 1/2 of Europeans who contracted bubonic plague were dead. While some kingdoms, duchies, and principalities were hit hard than others, locations as far as Iceland and Greenland were decimated.

We know that the plague was caused by the bacterium Yersinia pestis contained in the guts of fleas and carried by Black Rats combined with poor understanding about hygiene as the cause now, but at the time other supernatural and superstitious causes were invoked. The plague was thought of as a scourge sent by God to punish the wicked for their evil. Conversely Satan was invoked as the cause when men and women of unimpeachable repute were struck down. People believed that the disease was caused by cold and wet climates, that it could be prevented by opening northward windows, the pestilence was the result of an unusual alignment of the planets, and that one could remain safe with the right combination of herbs and spices stuffed into the beak of a mask that made it's wearer look like a crow: 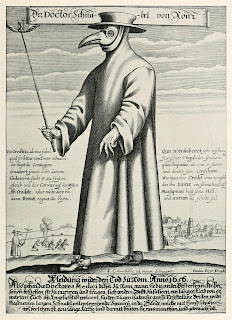 Many others however looked to scapegoats. One group included wizened old women accused of being witches. Another group was the old stand-by scapegoat of Medieval Europe:


Jewish people were made scapegoats and accused of causing the plague by poisoning wells, food and streams. They were often tortured into confessions, which only fueled the persecutions. Europe saw the mass execution of Jewish men, women and children, with Jews rounded up in town squares. The burning of Jews quickly spread throughout the Low Countries, Spain, France and Germanic areas.

A chronicler, Michael de Leone, said that “the Jews deserved to be swallowed up in the flames” for causing the plague with poison. In Barcelona, Jews were killed for the sin of being Jews, not because they were suspected of poisoning.

Basel burned their Jewish inhabitants on an island in the Rhine. In Strasbourg, approximately 2,000 Jews were burned in local cemetery on St. Valentine’s Day in an attempt to stop the pestilence. The Jews who agreed to be baptized were saved and some young children were pulled from the fire and baptized against the will of their parents. After the burnings, both the councils of Basel and Strasbourg made an oath that Jews would not be allowed to enter the cities for hundreds of years. 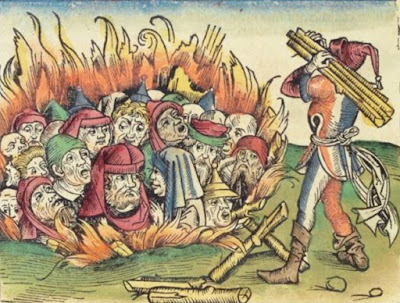 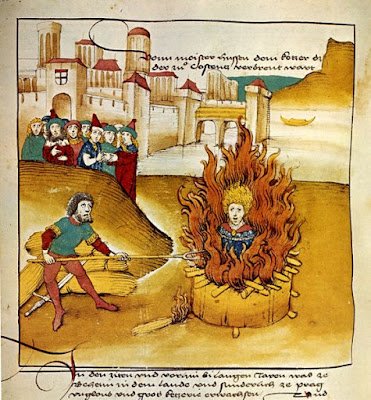 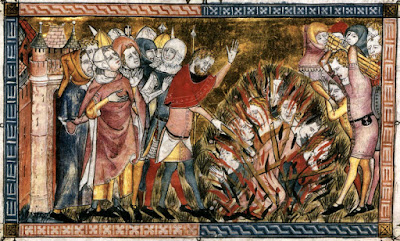 There were those who spoke out against this and suggested more natural causes even if they didn't comprehend how (an understanding of microbiology would be centuries in the future) but these voices in the darkness were invariably ignored, ridiculed, or suffered similar fates to those women and Jews who were burned.

Thankfully, we now live in a much more enlightened time when such superstitious and paranoid claptrap could never result in the scapegoating of an entire ethnic group, culture, or religion again. We're all just too clever. 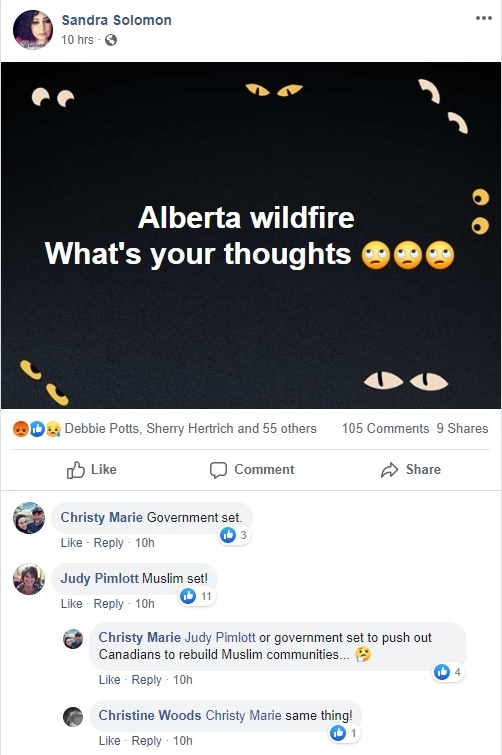 Notorious Islamophobe Sandra Solomon who has been written about a number of times on the blog already is referring to the forest fires in Northern Alberta. ARC has also discussed the phenomenon of much of the membership of groups such as the III% militia and Yellow Vests accusing Muslims of starting the fires. They claim that these fires, "never happened before 'those people' came" despite the very long historical record of fires that often occur naturally. Rather than accept the possibility the fire is the result of a (a) lightning strike (b) careless, but not necessarily malicious human activities (such as tossing away a still hot cigarette butt, driving an ATV through dry tinder, failing to put out a camp fire, etc) they now seem to automatically view every fire as suspicious.

Now it is true that fires have started earlier and have become more intense as northern boreal forests have become increasingly dry as a result of less snow fall in winters and less rain in the spring. In fact this was predicted by climate scientists as a result of human triggered climate change.

But rather than being convinced by the actual evidence, the members of the far-right ARC has been monitoring consider this proof of a leftist and environmentalist conspiracy to destroy the oil industry, impose new regulations to combat "fake" global warming and open up northern Canada to become a sub-Arctic caliphate. They believe that the current federal Liberals and former Alberta NDP government are working with environmentalists and Jihadists to start fires and that the "real Canadian" need to rise up to stop it: 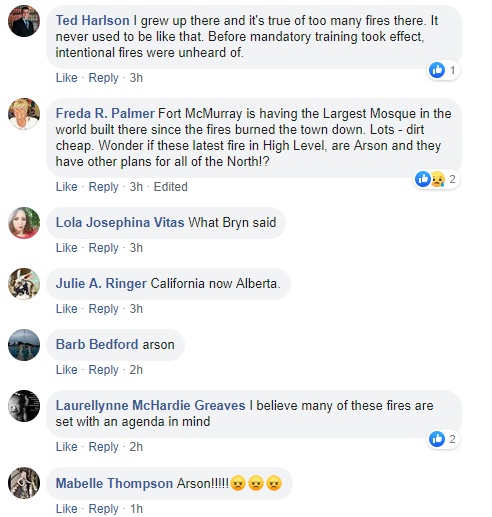 The same thing is being said on other social media sites ARC monitors, including Yellow Vests Canada, a group with over 100,000 members and a movement that people like Max Bernier and Andrew Scheer are courting:

The thread is long, and one could justifiably perhaps accuse me of giving this hate group undue coverage, but I think in this case it is relevant: 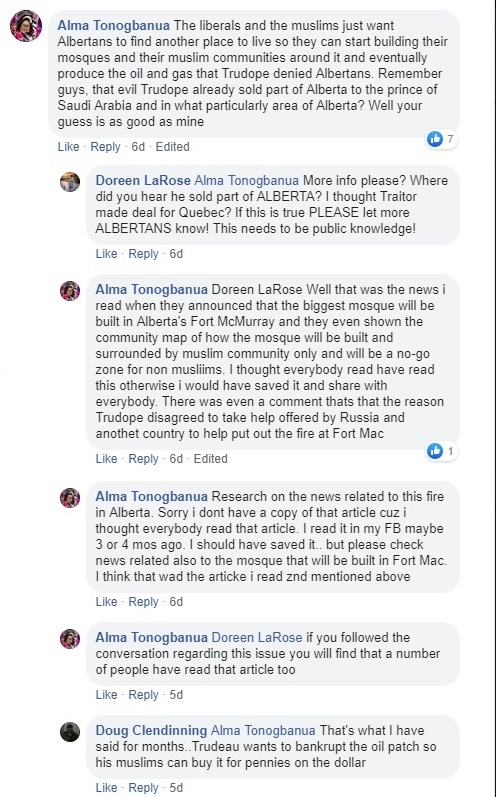 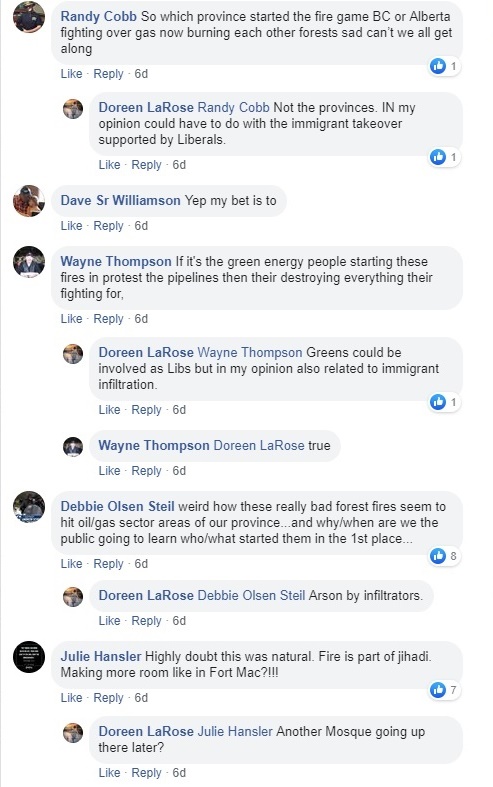 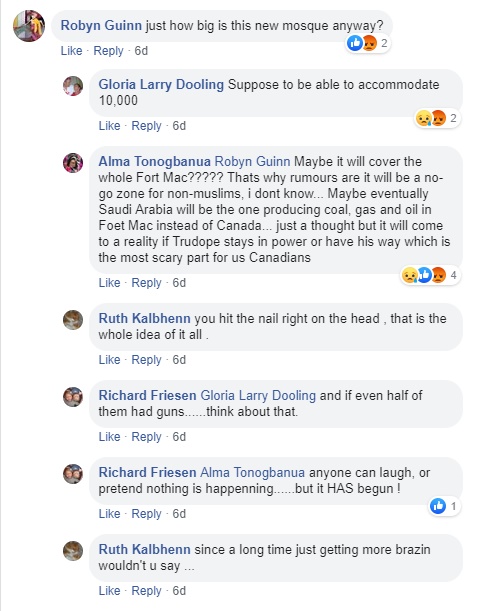 Again there were those who suggested that people shouldn't jump to conclusions and suggested more mundane causes:

They too were ignored or ridiculed: 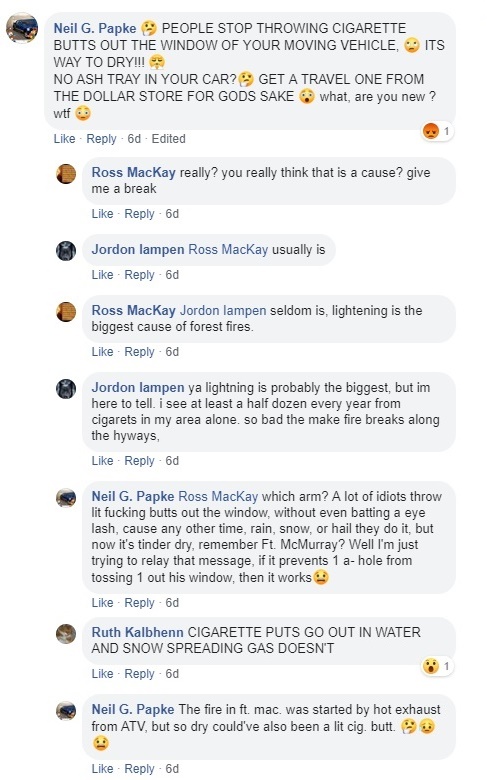 And like their superstitious Medieval predecessors, they look to a savior to deliver them from this modern pestilence.... though as of the writing of this article that savior is in Ontario hanging out with Doug Ford: 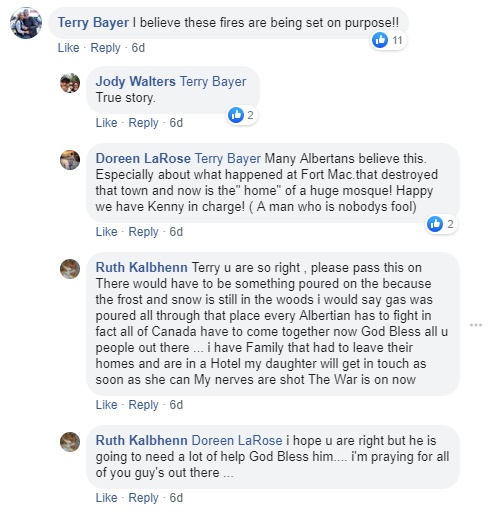 Could the fires be the result of arson? Sure, but it seems that most would be natural and/or the result of carelessness rather than malicious Muslims skulking around in the boreal forests working with traitorous politicians and environmentalists with an anti-freedom agenda.

Yet, here we are with people who believe something that stretches credulity beyond the breaking point. And as they become increasingly agree, how long before someone begins to target the scapegoats on to whom blame has been assigned.

I'm not sure how much more clever than the Medieval peasants our modern society really is.

UPDATE: I didn't notice this initially: 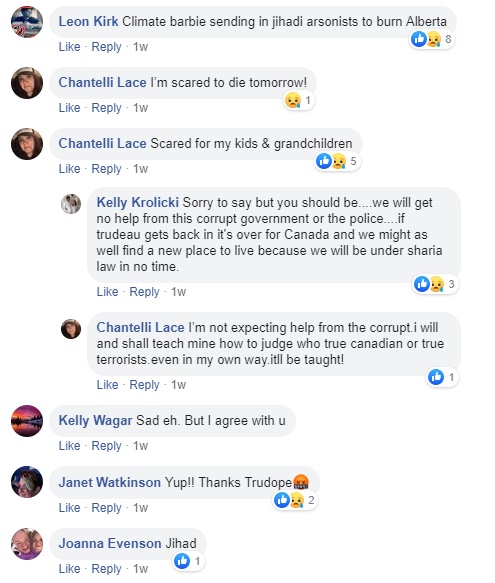 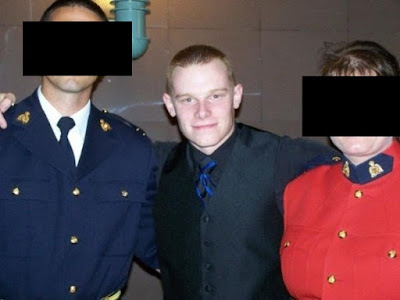 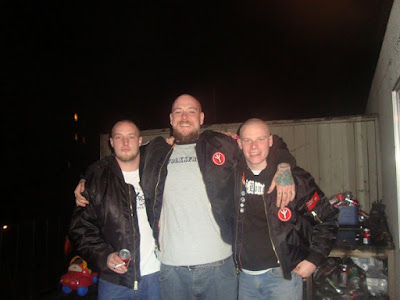 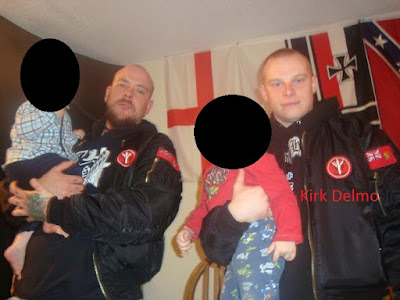 And here he is with fellow Yellow Vests supporter Paul Fromm: 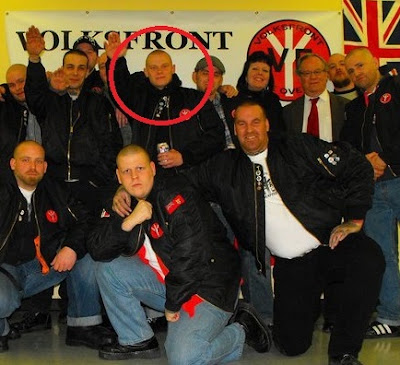 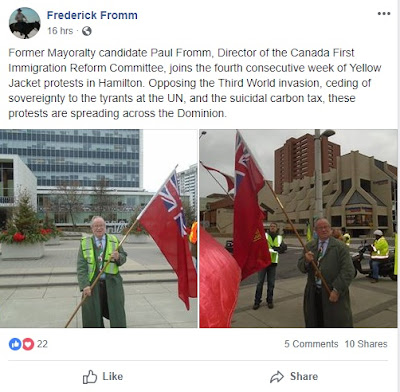