Today was supposed to be a good day. James Sears was supposed to be sentenced, which would likely have meant handcuffs and jail for him this morning, May 31st, 2019. But then, yesterday news broke that it wasn't going to happen. At least not yet. 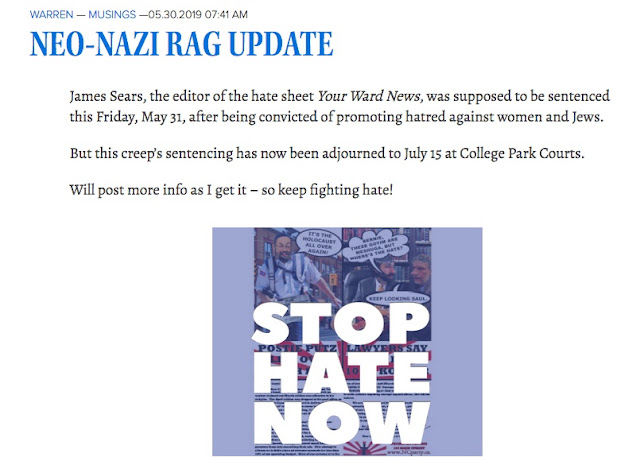 I thought maybe it had to do with LeRoy St. Germain's sentencing delay, due to his late Gladue Report, which is also scheduled for July 15th. Perhaps sentencing them both at the same time would cut down on their shenanigans and otherwise make life easier for everyone.

Nope. Nothing that logical.

The Toronto Star reported yesterday evening that James Sears fired his lawyer, Dean Embry, claiming that he had thrown the case. He also apparently plans to launch a constitutional challenge of S319(2) prior to his July 15th sentencing, and, unless something changes, he will do this without legal representation.

For his part, Dean Embry claims he didn't throw the case, and, despite once being described as "vicious and astute" in Your Ward News, Embry appears not to have understood what he was signing up for when he took Sears on as a client. He had trouble controlling Sears during their last court appearance when he wanted to present a lengthy "allocation." Embry stood by helplessly while Sears, during said speech, brought his friend Johnathan forward as an example of someone who's anger was supposedly redirected away from violence due YWN.

To give Embry some credit, he admitted on record that his client's work did devolve into hate speech and called it repugnant. Outside of court, Embry experienced backlash from the general public when a woman threw hot coffee on him at a shop near court. (I can't find the link right now. I'll add it when I do). I suspect Embry is relieved at being dumped by his client. It's a shame, however, that he did not see fit to dump his client first.

In any event, sometime between now and July 15th, the James Sears circus will begin again, this time without the restraints of legal council. One can only guess how, exactly, he plans to "reason with the judge" since he failed to do that last time. To give you an idea what we're in for, here's a clip published earlier on the blog that illustrates his "thought process" when it comes to legal proceedings. WARNING: n-word used.


Yup. Self-representation will be a disaster.