Who Will Most Likely Be The Target of Bill C-51?

We were all very pleased to read Daniel Gallant's take on Bill C-51 which the government is currently pushing through Parliament while limiting debate. We were especially interested in observations such as this:

Today, Gallant is a Prince George-based social worker, helping others make their exit from extremist circles.


And while he may be one of the faces of the new federally-funded campaign, he is also raising concerns about what he sees as the government's over-emphasis on Islamic extremism in the rationale for its new anti-terror legislation, Bill C-51, while largely giving other forms of extremism a pass.

ARC has significant problems with the proposed legislation of a constitutional nature (concerns also shared by at least one former CSIS officer). We are also concerned with the message of the legislation. For many in the governing party, as well as those who support the passage of Bill C-51, the extremists that are to be targeted are those who have been radicalized by Islamic extremism without consideration of others who have been radicalized by other ideologies. A common refrain we've read on online message boards and comment sections include variations of this statement:

"Not all Muslims may be terrorists, but all terrorists are Muslims."

This is dangerous because it stigmatizes an entire group based on the actions of a very small minority; there are according to the last census for which we have numbers more than one million Muslims and at 3.2% of the population comprised the largest religious minority in Canada. One would be hard pressed to legitimately suggest that most of these people, Canadian citizens who have by and large integrated into the fabric of Canadian society, are any more dangerous than a Judeo-Christian Canadian.

The claim is also patently untrue.

Back in 2011, one of our writers compiled what is likely the most comprehensive list of racist extremist acts in Canada during the past 45 years. While not minimizing the violence perpetrated by those who may be regarded as being motivated by Islamic extremism, when compared to the violence committed by neo-Nazis in Canada during the same time period, those acts committed by Islamic extremists in this country appear to be very small by comparison. And yet, when the government talks about the need for Bill C-51, they don't have people like Kyle McKee or members of Blood & Honour in mind. But it seems really difficult for the political class to recognize racist extremists as a legitimate threat.

So with this in mind, let's engage in a little thought experiment.

What if we were to tell you, our dear readers, that we know of a man (we'll call him X for now) who had contact with an individual (we'll call him Z) who murdered nearly 80 individuals by means of bomb and firearms? The action Z undertook was ideologically motivated. Now X was not only in contact with Z, but celebrated Z's rampage in writing and appeared to advocate for more of the same sort of action.

How many people in this country would be surprised if this were X? 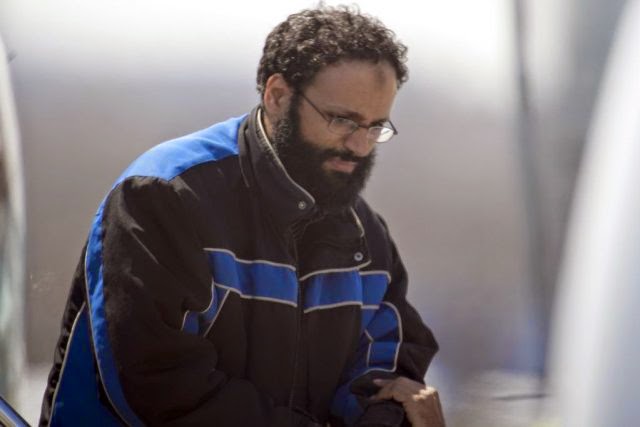 This here is Chiheb Esseghaier, one of two men currently on trial for a harebrained scheme to derail a passenger train.  We at ARC don't argue with the arrest or the trial, though we do note that while the government claims that cases such as this prove the need for the passage of Bill C-51 to provide law enforcement with more tools to target men like Esseghaier, he and Raed Jaser were investigated and ultimately arrested using the existing tools which sort of call into question the need for Bill C-51 in the first place.

In any case, could anyone argue that had Esseghaier made statements in support of mass murder, that alone would be cause to investigate him for any possible links to extremism?

But the thing is, though Esseghaier may very well be a very bad guy (the trial is ongoing) who may support extremist views similar to those we outlined in our little scenario, it isn't he whom we are referring to. 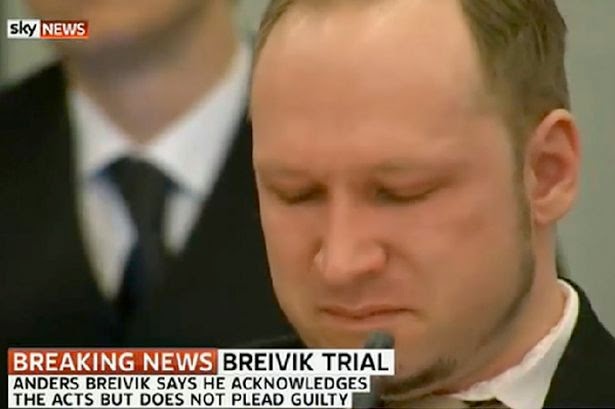 .... and X is our buddy Sebastian Ronin: 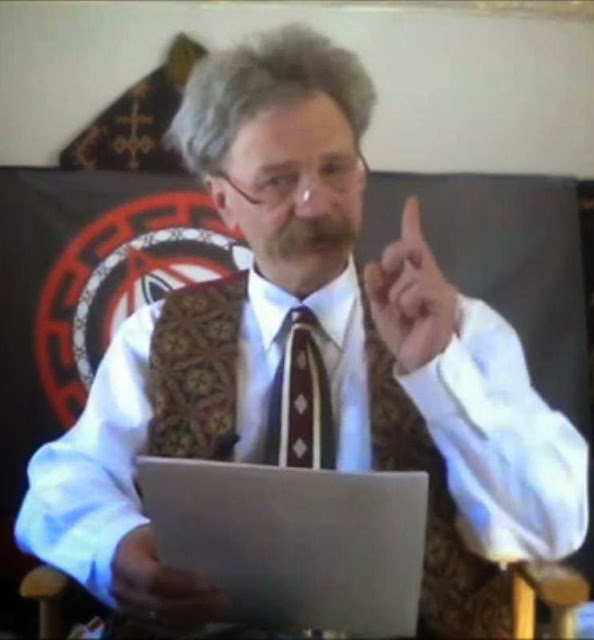 Ronin has long been a supporter of Anders Breivik. Shortly after the bombing in Oslo and the mass shooting in Utøya which ultimately resulted in 77 dead and more injured, Ronin wrote an essay celebrating the massacre as a great victory for Ethno-nationalism. He posted a video discussing his support for the terrorist attack in which he claims to be one of the individuals who received Breivik's manifesto as well as (according to him), being in continual correspondence since Breivik's incarceration.

As of this date, July 27, 2011, the military action carried out by Anders Behring Breivik in Norway has altered and shifted drastically the socio-political and cultural struggle of Occidental White Europids (WE™) to retake their ancestral territories, heritage and future history from Globalist-sponsored incursion, colonization and possible genocide. There will be serious setbacks. There will be serious blowback. There will also be considerable and, what was unimaginable opportunity prior to July 22, 2011, to exploit, at a sophisticated and dangerous level, for those White Ethno Nationalists with the political imagination, courage and resolve to do so.
....
All nationalist armchair and keyboard revolutionaries, myself included, have been put on notice and in proper place. The performance bar has been raised. The gauntlet that has been dropped is simple: either rise to the challenge upon this Archeofuturist Death Ground, or cut bait towards reformist and feel-good twaddle that will not so much as warrant a footnote upon the writing of White Europid history.
....
In conclusion, the Breivik action has punched a hole into the public’s wall of limited perception, i.e. denial/fractured political cognitive dissonance. The White Beast may not yet be fully awake, but at the very least it finally stirs in its sleep that has been pushed from deep and unconscious to restless. There is now a breach in the wall, and even though it is as limited as it is, for White activists it signals a shift from cultural RaHoWa to the opening skirmish of actual RaHoWa. WE™ now embark on claiming our own archaic sensibilities, an asset that up to July 22, 2011 had been the sole possession of our enemies. The accompanying political cultural landscape has experienced a significant tremor, a rip in its fabric, much to the advantage of these opening skirmishes and latent propaganda. 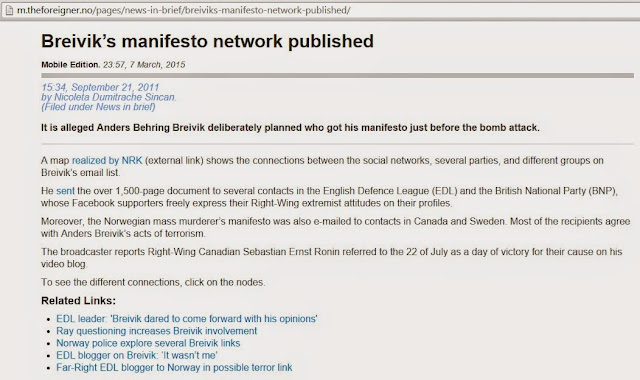 It is actually is interesting that we can use this particular example since we can also point to the shifting views of some of those who may support Bill C-51 in real time. Before it was known who war responsible for the terrorist attack in Norway, some of the folks on Free Dominion were very quick to label it an obvious example of Islamic terrorism. When it eventually became apparent that the act was in fact carried out by a white Norwegian who professed to be a "cultural Christian" and ideologically motivated by a hatred of Islam and multiculturalism, the narrative shifted. Oslo bombing and Utøya was no longer characterized as an organized act of terrorism, but as a crime committed by a lone crazy person. We posted a long string of screen shots from Free Dominion, however we also provided this summary:

If we are to be fair we should mention that at least Ms. Fournier, to her credit, has been very vocal in her opposition to Bill C-51. But if those who were active on the thread from which we took the screen shots were indicative of those who might support Bill C-51, then it leads us to wonder who which group will be the primary target of the legislation and which groups will be ignored.

Getting back to Ronin, we would again like our readers to imagine that he was brown-skinned and Muslim. What would might supporters of Bill C-51 say if they saw a poster like this.... 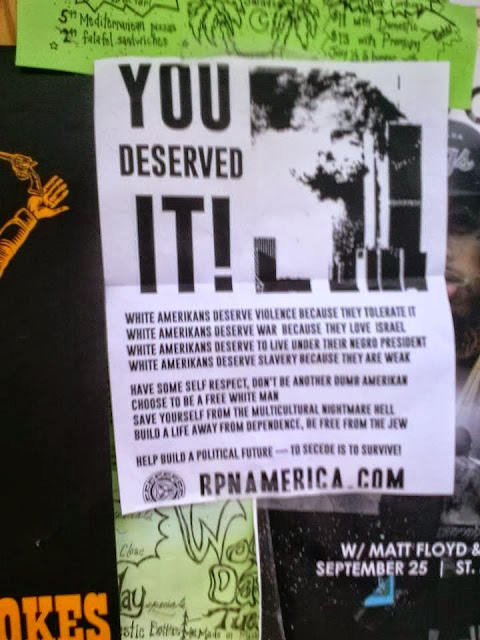 .... and how would they respond if he urged troops to overthrow the government....

.... and his whimsical suggestion that the Channel Tunnel would make a wonderful strategic target? 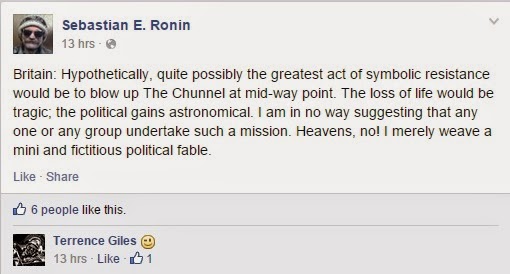 We think we our readers would be able to easily guess the response. It doesn't matter that the person is a lone misanthrope living in relative isolation. A Muslim advocating a military coup or suggesting the United States deserved 9/11 or supporting the murder of civilians as a legitimate political act would result in an investigation at the very least. If Sun News were still around, Levant would spend the better part of his programme talking about it.

Sebastian Ronin isn't a brown-skinned Muslim however. And, though his views are as abhorrent as any radical Muslim, he won't be investigated. He will be labeled as a crazy shut-in and ignored.

Double standard? Another of the multitude of problems with Bill C-51. 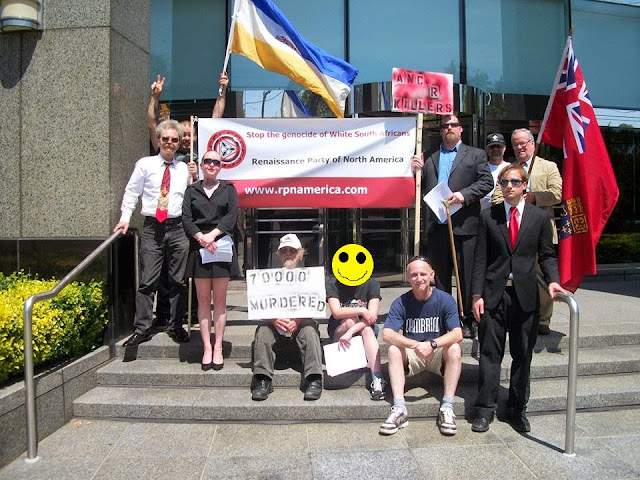 If you think that they are only going target Muslims and not white nationalists you are kidding yourself.