As ARC enters our third decade, welcome to 2020 folks!

I have to admit that I've been a little lazy with regard to keeping up with what is happening in Alberta these days. I've certainly been meaning to look back at some of the groups and individuals this blog has been monitoring for the past number of years but other projects were preoccupying me and I just wasn't able to devote the attention to some of the stories coming out of the province that I should have.

So thank goodness for the many activists who have taken up the challenge of monitoring the far right in Alberta. While there are currently a number of people and groups monitoring the far-right in Alberta one of the most prolific groups and one whose work I would like to highlight has been Edmonton Against Fascism (if you aren't following on Twitter, you absolutely should). In the month of December 2019 alone Edmonton Against Fascism (EAF) has provided some fantastic reporting on groups ARC readers are well familiar with:

Win Nay has appeared on the pages of ARC a few times. Nay is a hanger-on who jumps from group to group and has in the past been present for events hosted by Onward Christian Soldiers, the Soldiers of Odin, Worldwide Coalition Against Islam, and other hate groups. Here EAF discuss some of his activities during the past month:

BREAKING NEWS: Win Nay of the Family, a subsidiary of the Boar, wants to fight anti-fascists, but only if they are 200lbs or under. No restrictions on height. pic.twitter.com/MaKWBC7fSV
— EdmontonAgainstFascism (@EdmontonAgainst) December 4, 2019

BREAKING NEWS: It seems Win Nay feels he would be shooting guns and blowing things up if he was a full citizen. He also realizes capitalism is unfair but he believes there is a capitalism where workers can come first.

These patriots love to say, "If you're proud of what you're doing, why are you wearing a mask?"

Our question for you is why are you afraid of people knowing what you actually say? pic.twitter.com/xrKw7rxBTN
— EdmontonAgainstFascism (@EdmontonAgainst) December 7, 2019

While Dean has been relatively quiet at least comparatively, he and his group of three in the Clann (which is a little on the nose) have been busy taking pictures of themselves in Edmonton-area pubs and declaring it as some sort of victory for.... oh, I don't know.... reasons? I guess?

During the month of December, Dean appears to have given up any effort to claim he isn't a racist, anti-Semitic, Islamophobic, homophobe:

Local hero Ryan Dean shows that he was not visited by three spirits this Christmas as he continues to be an anti-semite.@ARCCollective @VestsCanada pic.twitter.com/LrG92JJycv
— EdmontonAgainstFascism (@EdmontonAgainst) December 27, 2019

Dean has also attempted to hinder the efforts of Bashir Mohamed in his efforts to sue Ezra Levant's Rebel Media for defamation:

Ryan Dean is attempting to shut down a GoFundMe campaign for legal fees in a case against Rebel Media.

Local hero Ryan Dean has let slip what the motivations were for Soldiers of Odin patrols.

We already knew the answer: to target people of Colour because SOO is a hate group started by a nazi.

When you find out that you're actually a 31 year old American permanent resident and belong to the Ashraf clan pic.twitter.com/2hRv01Ynfg
— Bashir Mohamed (@BashirMohamed) December 29, 2019

Suffice it to say Dean's efforts haven't been successful as Mr. Mohamed has raised more than $26,000 from 616 people in less than a week. Dean on the other hand may find himself the subject of a civil case if he doesn't smarten up:

Hey @slipknot, there are some neo-Nazis using your music in their recruitment video.https://t.co/u5RFF6yOxQhttps://t.co/V8rKkEyo9i@ARCCollective @VestsCanada
— EdmontonAgainstFascism (@EdmontonAgainst) December 31, 2019

Years after founding the hate group WCAI Joey Deluca is still desperate to convince people he is relevant. Over the years he has created numerous sock puppets and dummy groups in an effort to make people believe that the Worldwide Coalition Against Islam is actually worldwide; his repeated failures put the lie to this claim. This past month EAS found yet another sock promoting the WCAI which is clearly Joey:

Other patriots disagree with WCAI's approach, but when we look at who has liked and shared the post, we discover that Joey De Luca is a thirsty man. pic.twitter.com/BGULPBPEFs
— EdmontonAgainstFascism (@EdmontonAgainst) December 7, 2019

And given the ecosystem Joey exists in, people who live in glass houses shouldn't be tossing stones around:

To be fair, Joey doesn't strike me as someone who would appreciate poetry.

The most interesting find this month however was Joey's dating profile:

Joey De Luca has surfaced on a dating app. He is the leader of the Worldwide Coalition Against Islam. He is also aggressive, violent, and racist.

In news that shouldn't surprise anyone he is also using this effort to someone who will love him for the racist hate-monger that he is to harass Muslims and people of color. In one case he posted one of the exchanges in what can only be described as an epic self-own that he thinks makes him look good:

De Luca tries to present the Worldwide Coalition Against Islam as being both worldwide and as a helpful organization.

His target, being far too patient, responds one more time in an attempt to set De Luca straight.

I think the messages show that neither of these things are the case. (4/4) pic.twitter.com/lIroWp2r1k
— EdmontonAgainstFascism (@EdmontonAgainst) December 29, 2019

I don't know who the woman is but I like the others who have read the exchange would love to be her friend. Given that Joey Deluca's name will be associated with posts such as this, I have a feeling that he should probably get used to being swiped left:

Joey De Luca also tries to own the libs with some racism, despite Steven's earlier request to not do that kind of thing.


Which coincidentally brings us to.... 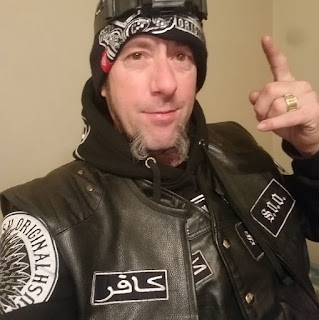 Our readers will remember Steven Lane (aka "Heathen Steven") from both is unfortunate choice of facial hair and his participation in a WCAI organized event in Edmonton in which he was taken into custody for a time:

Other hate groups involved included the Canadian Combat Coalition and the Northern Guard.

Anyways, although the SoO was Steven's ride or die, it wasn't too long before nationalization occurred and Lane split to form the Urban Infidels.

Yeah. That's an actual name an adult decided to go with: 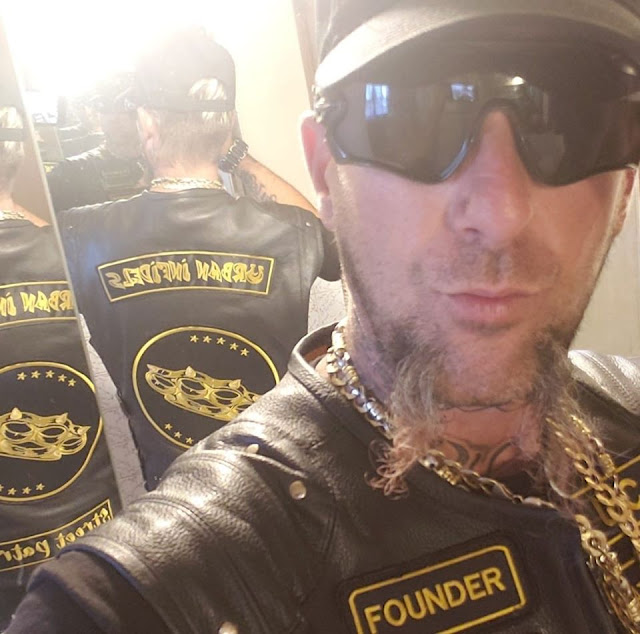 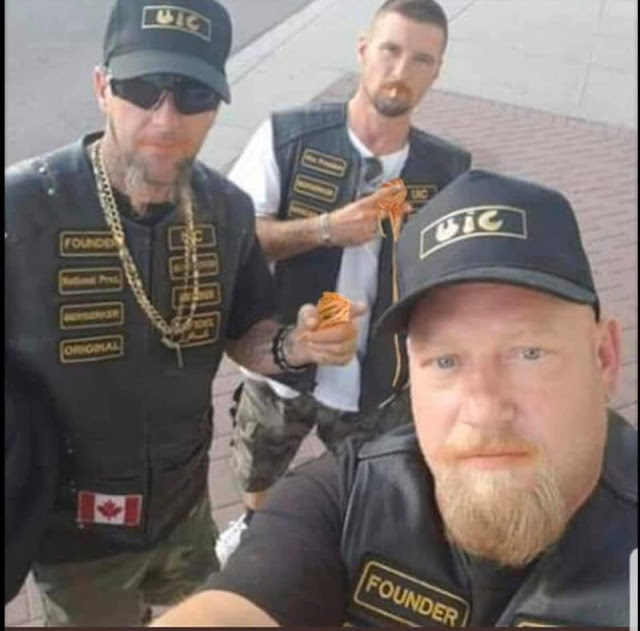 And like other faux-biker wannabes (SoO, Northern Guard, etc) who wear ill-fitting clothing at least two sizes too large for their frames....

.... they really love their leather vests and patches: 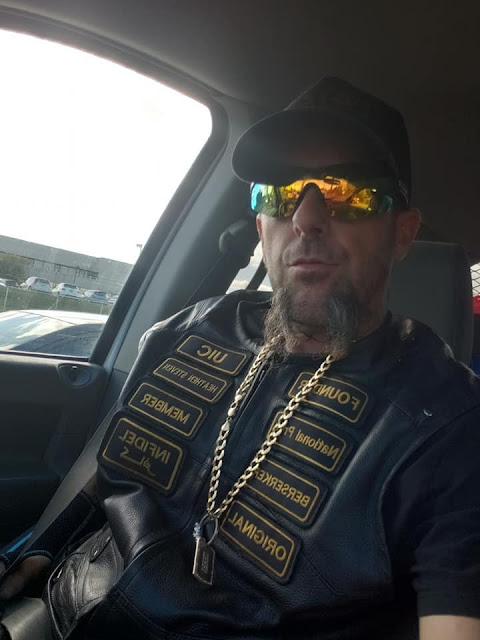 No, you don't understand.

They REALLY love their patches: 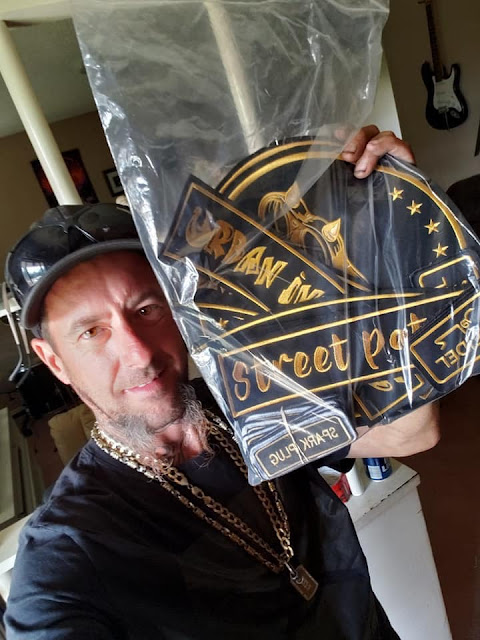 Like, in a way that is sort of weird:


Then again who am I to be critical of anyone's kink?

The Urban Infidels, particularly Lane, have been a significant focus of EAF's reporting:

If you're not familiar with Trenerry, here is a good summary. Yellow vest, 1488, and an Alberta separatist line that just didn't take off.

Now, I'm not so self-centered as to think this is definitely about the work we do here at Edmonton Against Fascism Industries, LLC, but it did happen after our tweets. Might be a coincidence.

Also we're pretty sure you'll fail by spending all your money on patches. Must be close to 8 per person. (And the new patches you'll need once you switch hate groups again.) pic.twitter.com/z1KrvJweKE
— EdmontonAgainstFascism (@EdmontonAgainst) December 3, 2019

I think the only thing Steven will be famous for is having the real life equivalent of Baby Huey in his group. Nice snag, Steven. pic.twitter.com/QXlStwDtKG
— EdmontonAgainstFascism (@EdmontonAgainst) December 4, 2019

Steven Lane got so mad that he had to call over Aaron Milonas of London, ON's Urban Infidels.

Steven Lane, with his nerves and skin of steel, manages to still not be mad. Great job!

Hey everyone, please stop suggesting that we "fire up the ovens" on Steven's profile please. pic.twitter.com/MyVE0HsL6U
— EdmontonAgainstFascism (@EdmontonAgainst) December 5, 2019

Have you ever seen a (potentially?) 40-year-old man be so calm and reasonable on the Internet? pic.twitter.com/FJ4svpZHSS
— EdmontonAgainstFascism (@EdmontonAgainst) December 6, 2019

Question: what do you get when you combine camo, a love for brass knuckles, and a Confederate flag for some reason?


For some reason they think bacon is hilarious: 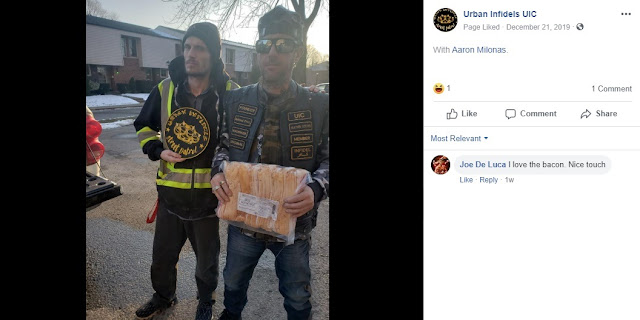 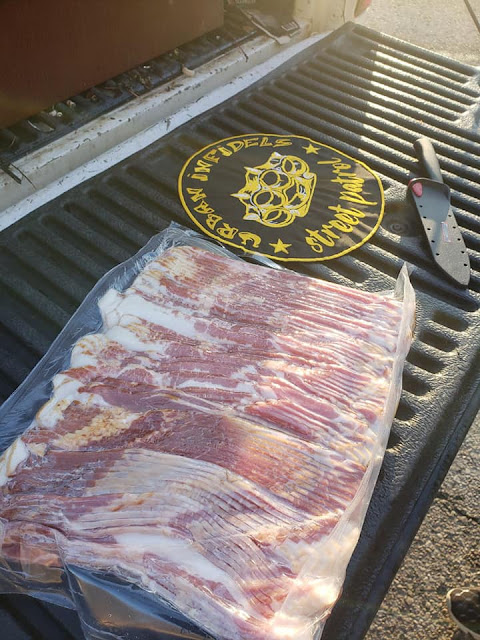 Yeah.... posing with bacon to stick it to the Muslims and Jews.

Once again I remind readers that these people are ostensibly adults.


Their most recent recruit is Chris Vanderweide who is best known for assaulting people at a Pride event in Hamilton and is currently awaiting trial. And as we know there's nothing that makes a judge more happy than a person awaiting trail for assault posting images of his joining a hate group and bragging about how he will continue to assault people:

Chris Vanderweide hanging out with hate group leader Steven Lane. You might remember Steven from when he was detained after assaulting someone in Edmonton this past spring.@ARCCollective @antihateca @VestsCanada pic.twitter.com/dKrJ8JcIwo
— EdmontonAgainstFascism (@EdmontonAgainst) January 1, 2020


Vanderweide is a rather interesting person to recruit considering how he tends to throw his former supporters and boosters under the bus. In a movement that is often torn apart by big egos, it is hard to see Vanderweide following anyone.

In fact we've already seen the factionalization of the Urban Infidels:


While Lyons was a member of the Northern Guard prior to his membership in the Canadian Crusaders (again, they are legally grown-ups who think these names are cool) Ricky Rush is on this third in a calendar year:

This means that Ricky has been in at least 3 different groups in the last 8 months. Not bad!
— EdmontonAgainstFascism (@EdmontonAgainst) December 6, 2019

There are a lot more that EAF is focused on but this represents a sample.

I once again urge reader to give them a follow.
Posted by Nosferatu200 at 23:39