This will be relatively short. First, we would like to provide our readers with what looks to be a bit of a preview:


We have a feeling that the lives of the Southern Ontario Skinheads are about to become a lot more public and, perhaps, a lot less comfortable. And that all might be happening very soon.

More on that later. In the meantime, we offer our readers the wit, wisdom, and silver tongue of Mr. Hynes who waxes poetically about the nature of the fairer gender:


Yeah, hard to believe these people have a difficult time maintaining relationships. Or forming relationships in the first place. But.... wait.... is that Bernie Miller we see? Why yes it is! Miller has just recently completed his house arrest stemming from an incident in Edmonton which also resulted in Kyle McKee ending up serving a year in jail. It's sort of funny that an ally of McKee, someone who is suspected of being involved in the assault on Hynes in the summer of 2012, would be communicating with Hynes. Even more funny when you consider who Miller is pictured with in Miller's profile photo:


That there sidling up to Miler is Eric Marshall, one of the two men (along with Jessie Lajoie) who assaulted Hynes after being lured into the trap with promises of a sexual encounter with Ms. Kissack.

Lolita Davidovich was born in London, Ontario. She had a role in the movie "JFK" which also featured.... Kevin Bacon.

Wow. You really can link anything and anyone to Kevin Bacon.

Meanwhile, SOS supported Wes Smith continues the Quixotic campaign to free Creativity Movement leader Math Hale from prison where he is serving a 40 year prison term for soliciting the murder of a federal judge. We're sure Wes' flyering campaign will win over as many as ones of people to his cause:


Finally, this simply wouldn't be a bits and bites post without Paulie. Not long ago, Fred Leuchter (yes, THAT Fred Leuchter) posted the following photo: 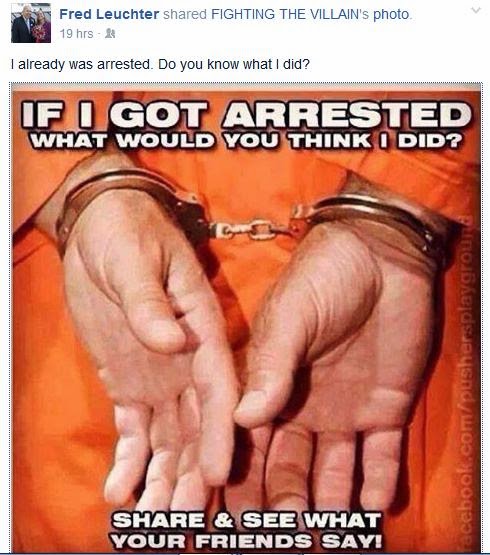 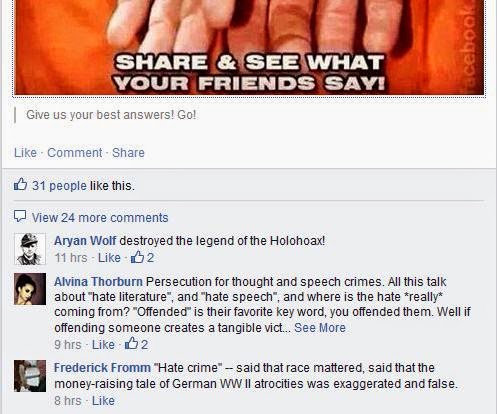 Well, actually Leuchter had criminal charges filed against him for practising engineering without a licence, but the conspiracy theory plays a lot better to this crowd.

Believe it or not, Paulie's Holocaust denial isn't the first time he has addressed the question posed in the above photo: 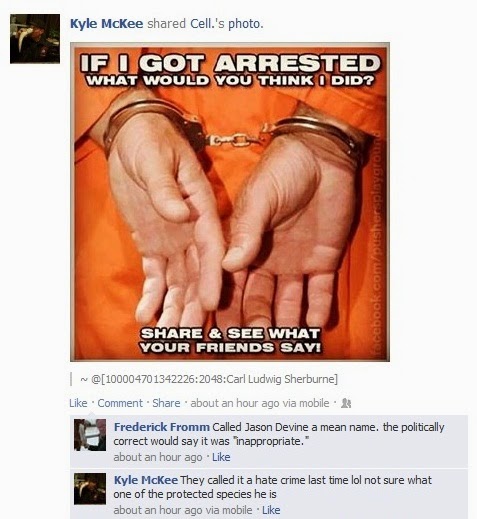 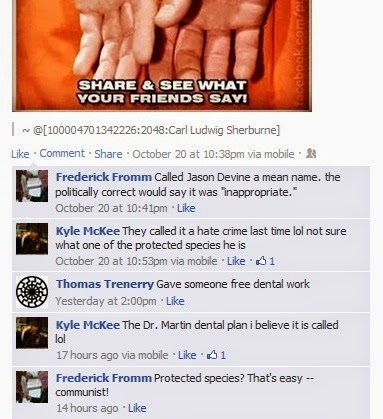 Really Paulie. Joking about an assault and a subsequent threat?

Wait. No. Never mind. This doesn't surprise us in the least.

Just wondering if there has been any update on Sturrup and Reitmeier Appeals... I believe they were heard yesterday.

Check out page 5 and 12 of Alberta Court Appearance Publiication http://www.albertacourts.ab.ca/LinkClick.aspx?fileticket=vyrObxLEIBk%3D&tabid=230&mid=567

Any news would be great, thanks for what you do here!

Anon 1:
If it was actually any of your business, you'd already know what was going on and be in the loop. Seeing as you're non-the-wiser, perhaps that suggests that it doesn't concern you in the slightest. Try keeping your goddamn noses out of other people's shit. Pathetic :)

Right. It's pathetic to wonder about the status of a convicted murderer's appeal.

You are aware that the media covered the trial quite extensively? It isn't exactly a private matter. And considering it was the Crown vs. Robert Reitmeier, it seems that it is very much the business of the public.

You know, it's not got so much to do with "the status of a convicted murderer's appeal" as it does with a man that you've fixated on over a period of years. You've repeatedly gone out of your way to attempt to intrude on people's personal lives, which are legitimately none of your concern.

I find it a little bizarre how such an unhealthy obsession appears to have unfolded. You're all so inexplicably smug over their present circumstances (Truthfully, I could care less for Tyler: he has never been a friend of mine and never will be).

Why not champion the possibility and hope for change instead? Sometimes it takes something huge for people to see the bigger picture instead of being so short-sighted...

Your husband and his friend murdered a person for shits and giggles. What you interpret as us being smug is in reality satisfaction that Robert and Tyler are exactly where they should be, but that satisfaction is tempered by the reality of a man's death.

He may find redemption in prison if he is sorry for what he did, but we won't hold our breath.

Hasn't anyone realized that his "wife" is a nut job just as much as he is.

Anon 2:
I'm not sure why you refer to me as his "wife"; we are legally married and have been for almost 4 years.

Of course, there's always going to be one that resorts to name calling and childish remarks. Tell me, why am I a "nut job", as you so eloquently put it?
Because I choose to defend a man that literally means the world to me? I sincerely hope that one day you find somebody that you care enough about to stand by, through thick and thin - your life might just be that little bit richer for it.

What little you think you might know about me has been based on rumors and half-truths, mixed with a little misinformed gossip. I'm happy to say it exactly as it is though:

I'd be the first to actively encourage people to leave behind a "movement" that could give two fucks about them, to advise making smarter choices and picking "friends" wisely.

I promise you, all those people that you were so quick to brand as your "brothers" WILL evaporate when you've been down for a couple of years, when paying the price for a cowardly decision you made in the heat of the moment. You'll be lucky if your family and other friends wish to be associated with you, and even luckier if your partner doesn't leave you within the first year.

I've seen so many people constantly going through the motions of being in and out of jail, treating it like it's some kind of joke. So many people getting hurt, shot, stabbed….and for what? The damage you're doing to yourselves -and to others- is phenomenal and can turn tragic in the blink of your eye. Where do you want to be in 10 years? Cause there's enough room in the pen alongside my husband for you if you choose to carry on down the same paths.

I'm less than 12 months off graduating my course to become a nurse; I chose to make positive changes in my life and hopefully impacting others too. I do hospital placements weekly, where I help people- regardless of ethnicity or religion. It's not my place to judge, nor do I wish to.

What's "nuts" about that?