On January 24, we posted an article on Luke Northmore's efforts to convince his fellow travellers that he is a player on the racist scene in Canada. We MAY have made light of his efforts.

It looks like he wasn't particularity pleased with our characterization of him and his "group" because he decided to respond to us in a video:

Yeah, we do make a lot of funny comments. And no Luke, we aren't scared. Not in the least.

Despite his efforts to control his anger on the video, he appears to be pretty miffed about the attention he has garnered from us as exhibited elsewhere:

Actually, we wouldn't have to make up a law Luke. Hacking websites is already illegal and it has nothing to do with hate crime legislation. That being said, you and Max seem to be under the impression that we hacked the SOS Facebook page. Nope, the one that you are complaining about actually predates the one  you created Max. Your SOS Facebook page was simply removed by Facebook for violating the terms of service.

Gee, we wonder how that happened?

But back to Luke.

In his video had challenged us to look beyond his spelling and facial tattoos and to "attack" him "on something else." Luke notes that we didn't refer to him as a, "mindless, criminal, thug" and suggests that if we were to look into it we would find that he is, in fact, a pillar of Kingston, Ontario society. 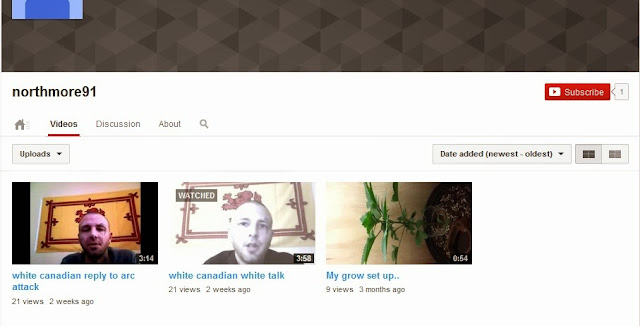 
Now some of our readers, including some of our supporters, might suggest that we are being a bit petty given how ridiculous Canada's laws regarding marijuana are. That's a fair point, however we wonder how Mr. Northmore and his WN/WP friends would respond to a video highlighting the grow-op of someone of color? Since they like to talk about the criminality of minorities, and since most minorities who run afoul of the law do so as a result of non-violent drug crimes, we humbly suggest that their views on this particular issue might be a little hypocritical.

More serious however is the domestic dispute we found when plugging Luke's name into Google:

Lucius R. Northmore, 32, was convicted of causing a public disturbance by throwing a recycling bin and kicking the car of his estranged partner in March when she wouldn't open her door to him, and violating an order attached to his bail that forbid him from communicating with her. His sentencing was suspended, he was placed on probation for 18 months and ordered to co-operate with any assessment, counselling or treatment directed by his probation supervisor, including the Partner Abuse Response program.

Changing your middle initial on Facebook isn't going to fool anyone Luke. We're still interested in the original crime for which he was out on bail when this incident occurred. We need to look into that a little further but as of now we will deal with the low hanging fruit.

Northmore has sort of hitched his wagon to Max Hynes now:


Not sure if this means that Northmore is continuing with his own efforts and looking to cooperate with Hynes or if he has abandoned his (Aryan) United Front project to join the SOS. After all, the SOS has pretty strict membership requirements:


And by strict membership requirements we mean that Max has a t-shirt that will fit people interested in joining. 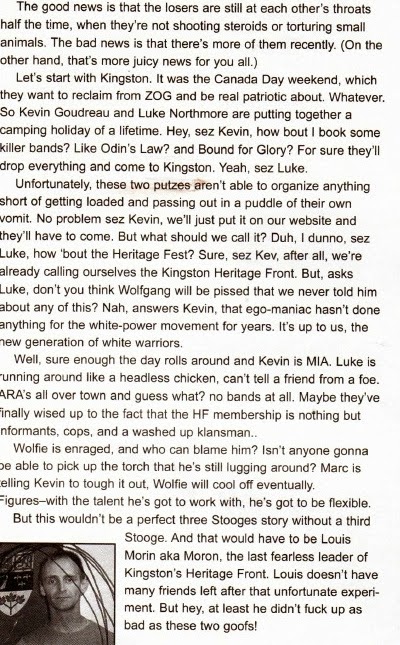 As a Scottish Canadian I'm extremely disturbed to see that puny little fuhrer posing in front of the royal standard. I can assure you that he would last about five minutes in the streets of Glasgow (two minutes on a Saturday night) before having his ugly tattoos rearranged in a suitable manner. Scotland is a progressive country not a racist one, and scum like der fuhrerling are definitely not welcome. Keep up the good work, you're obviously getting to him.

He looks like an older version of Rob. It's disturbing.

Lol this is hilarious. Someone should ask him about his hardcore criminal life background while he has done only young offender time. The spousal abuse really speaks volumes about his character as well. Seems to me like "Johnny try to hard" here needs to go back o school and work on that education. Perhaps get off the governments back, ODSP!! For the record, he didn't earn those tear drop tattoo's just got them because he thought they looked cool. He still owes Josh Last money for his Mike Tyson tattoo. Try growing up and being a parent, didn't he say in his video that he has a 13 yr old daughter that was bullied for spelling? Is he just me or this clown like a really bad cartoon character of a guy with no direction looking for a place to fit in. And if you would like to continue to laugh at this pathetic imbeciles attempts at racism and a movement, you can find him on Facebook under "Aryan Pride", spelled properly this time around.