For a change of pace we decided to see what would be polygamist Jon Besler was up to lately. So far his activity seems to mainly consist of commenting on mainstream media news articles (as well as our articles, which we guess makes him Alberta's version of Tomasz Winnicki) which seems to keeps him out of any real trouble. However it was his recent comments on an article published by the fringe right Free Republic that caught our attention: 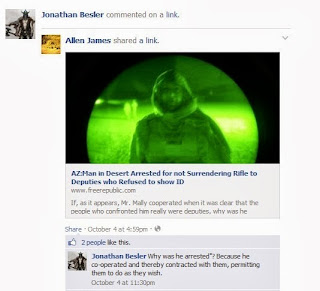 We're not going to go into the details about the article itself (if you wish you can read it here) but long story short, a group of weekend warriors pretending to patrol the border got into trouble with real law enforcement agents. Jon seems to be of the opinion that the only reason why the group was arrested is because they co-operated, thus creating a contract with law enforcement giving them the authority to arrest them.

We can only assume then he would have preferred a firefight of some sort.

The person who replied to Jon appears to have been the fella who was arrested. And his response was actually somewhat reasonable.... for someone who seems to be a bit of a nutter himself at least. 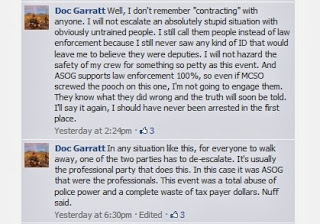 This is, considering the mindset of someone running around the desert in camo and armed to the teeth, a reasonable position. At least the part about deescalating the confrontation (the rest of it is sort of the paranoid, reactionary, rhetoric we're used to hearing from these types).

But Jon Belser will have none of it. 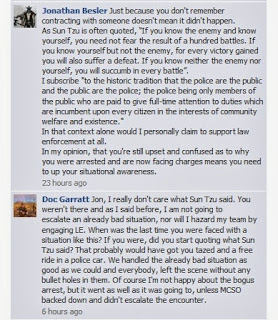 Because when we think Jon Besler, we think of a leader of men.

Not surprisingly "Doc Garratt" suggests that Besler really can't comment on what had occurred since he has likely never been faced a similar situation. Besler then dismisses "Doc Garratt's" leadership abilities (which again sort of raises the inevitable question concerning Besler's leadership skills), indicates that he HAS been in a similar situation and didn't back down, and that the vigilante border patrol should start shooting undocumented migrants crossing the border (easy to say since it's not his ass on the line concerning any legal repercussions). 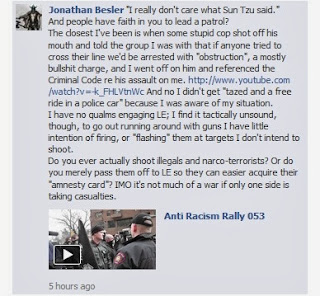 But more to the point, Jonathan Belser suggests that facing well armed law enforcement officers at night in the middle of the desert near the border is equivalent to his temper tantrum directed at cops on bicycles during the 2011 Blood & Honour March in Calgary.

Wow. You are a hard man Mr. Besler.

You're right. You did go off on him, and made a fool out of yourself in the process. But we can't help but comment on two points about the encounter.

We notice that despite your histrionics, and despite your criticism of "Doc Garratt"  for making the wise choice by standing down, you didn't attempt to cross the line in the video yourself. None of you did. In fact, you physically backed away from the police.

You didn't storm the police line. You backed down but tried to (and failed utterly) to save face by impudently yelling at the police. But in the end, you did nothing.

Why is that, Jon?

FYI, the answer to your question from the video is still a resounding yes, we do. And we're sure we are not alone in that assessment. 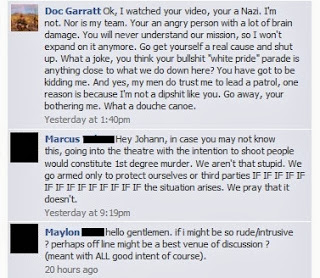 .... followed by Besler turning on the charm: 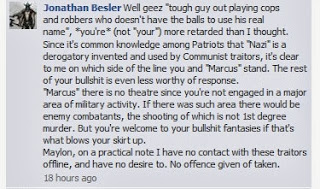 Believe or not, these milita-types don't take kindly being called commies and traitors:

Besler responds with the same characteristically cool demeanor that we saw earlier in the video when he's bravely backing away from a bicycle cop: 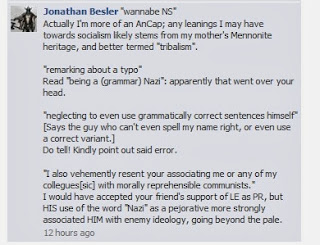 LOL, what a tool. He can only be happy that the cops in Calgary are such gentle people.

I've protested against racism and fascism in Spain, Germany and England. Just for yelling at a cop there they make you kiss tarmac or give you a reason to see you dentist before schedule. Or twist your joints until they snap. While kneeling in your spine with 2-3 people.

And he calls that standing up to law enforcement? Pathetic.

Calgary cops are gentle people ??????? Are you fucking nuts ? Obviously you have never had to deal with them . They are Cowboys with small dicks. They are the same all across the world .