Our friends BigCityLib and Dr. Dawg posted articles excoriating CTV for giving Paulie a forum yesterday during his BC protest to attack the Tamil migrants and for failing to mention his rather sordid past (and present) in the White Supremacist movement. Nary a word of Paulie's links to the Heritage Front of the past, nor the Aryan Guard now, was mentioned. Paulie is instead introduced as an immigration reform activist.

Criticism of the media white-wash of Paulie's views and associations came from another, somewhat unexpected, source:

Paul Fromm's efforts to rouse public opinion against the Tamil migrant ship began last month from his home in Ontario, with impassioned messages posted to Stormfront.org, the Florida-based neo-Nazi website of which he is a "sustaining member" and radio host.

It continued last week in Calgary, when he led a group of Aryan Guard skinheads to Citizenship and Immigration Minister Jason Kenney's constituency office, and so terrified the receptionist that she locked the door and would not accept Mr. Fromm's delivery of a letter until police arrived.

But for Canada's best known racist agitator, things did not really get going until he reached the Pacific shore at Esquimalt, B.C., on Saturday, where the boat was docked.
There, accompanied by Doug Christie -- famous as the go-to civil liberties lawyer for every top Canadian racist of the last 30 years -- Mr. Fromm got himself front and centre on the national weekend news, flanked by his small group of two dozen protesters.

Mr. Fromm, whose license to teach high school in Ontario was revoked in 2007 for his activism against non-white immigration and ties to groups like the defunct neo-Nazi Heritage Front, appeared in reports by three major news outlets, identified only as the leader of a group called "Canada First," or "Canada First Immigration Reform Committee."

“If we do need immigrants, the public opinion polls show that the majority of Canadians don’t want the ethnic balance upset,” Mr. Fromm said, according to the Toronto Star story.

The media exposure for his message recalls an episode in 2008, when Fox News was criticized by a U.S. anti-hate group, the Southern Poverty Law Center, for allowing Mr. Fromm to appear as a "free speech activist."

Fox News is one thing, but to score prominent coverage offering comment on a national refugee crisis to the Toronto Star, Canadian Press, and CTV indicates that Mr. Fromm's nose for media is especially refined.

Mr. Fromm said he was "pleasantly surprised at the amount of press interest."

"I did find it unusual," he said. "I took it to mean that some of the journalists have actually gone to journalism school."

The Victoria Times-Colonist reported on the protest and identified Mr. Fromm as a "white supremacist."

The others are not the first media outlets to be fooled in this way. On the surface, "immigration reform" has the same kind of naive appeal as "historical revisionism," a euphemism for Holocaust denial, and a field in which Mr. Fromm is highly regarded as a free speech champion.

Dressed as he was in a suit and tie on a sunny summer's day, Mr. Fromm made an obviously professional spokesman for the media pack. His manner is typical of the public pose struck by other elder statesmen of Canadian racism, such as Don Andrews, a fellow traveller back to university days in Toronto, whose conviction for the wilful promotion of hatred against blacks and Jews was upheld in 1990 at the Supreme Court of Canada. Mr. Andrews has a similar attention-grabbing prank of getting municipal governments across Canada to declare "European Heritage Week," without realizing that the sponsoring organization, his Nationalist Party of Canada, is explicitly white supremacist.

It is a winning strategy, to put a genteel face on racism for the unsuspecting public, as Jared Taylor of American Renaissance discovered in Halifax in 2007, when he challenged an unwitting Black studies professor to debate him on multiculturalism, then basked in media coverage when the professor realized he was an avowed racist, and cancelled.

In the case of the Tamil migrants, all Mr. Fromm had to do to seize the spotlight as a voice of dissent was to gather a few people on a roadside outside of Victoria, B.C., and just start talking.

"The only way to really do something about people smuggling is to make sure that if you come in through the back door illegitimately like this, you don't get in," he said in the CTV report. For balance, his remarks were followed by the more welcoming sentiments of a group of native women from a nearby reserve.

For the modern "immigration reform" activist, that is how to play the publicity game -- think like the media, get to the scene, and get on camera. And if success if measured by exposure, it is also how to win.

We have to applaud Mr. Brean for being able to see through the veneer of respectability that Paulie has created for himself over the years and label Paulie as the bigot he is.

One part of the article that struck us and which we want to explore a little more is that Paulie puts a "genteel face on racism." Exactly how genteel has Paulie actually been since the late 60s when he became active in the White Supremacist movement?

Those who are aware of Paulie's past know that he was one of the founders of a group called the Edmund Burke Society. The Edmund Burke Society has always been presented by Paulie as a group of young college kids who were opposed to communism and the shift to the left in the country as a whole during the Trudeau era. To listen to Paulie, it was a group dedicated to free speech and engaging their opposition in a vigorous intellectual debate over the direction of the country and would attempt to sway Canadians through the strength of their ideas.


The reality paints a different picture of the Edmund Burke Society. The reality seems to be these were thugs who physically attacked their opposition and shouted down and attempted to intimidate those they disagreed with.

In June 1970, William Kunstler who was at the time defending the Chicago Seven, was speaking to students at the University of Toronto. Soon after he began his speech, a contingent of the Edmund Burke Society began to heckle Kunstler in order to drown him out and prevent him from speaking to the assembled students. Kunstler invited one of the group, Paul Fromm, to come to the podium to voice his groups concerns about his visit. Long story short, Paulie ended up all wet and Kunstler was attacked by the Edmund Burke Society members in attendance: 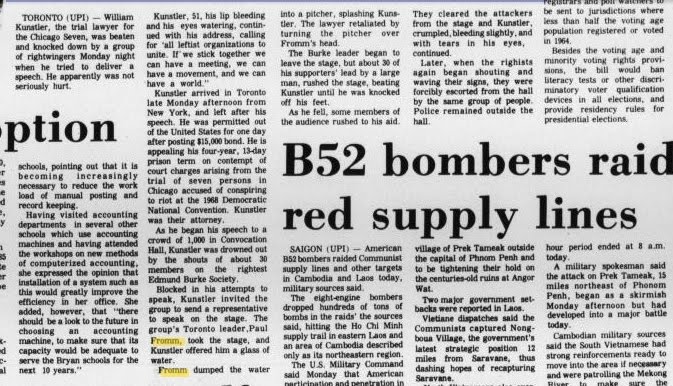 So much for free speech.

Another even more serious case involved visiting Soviet leader Alexei Kosygin. Kosygin was attacked by a member of the Edmund Burke Society Gezan Matrai. Rather than disavow the attacker, the membership expressed pride in Matrai's efforts. Later, on a tip that there was an assassination plot against Kosygin, the homes of Edmond Burke Society members were raided resulting in a number of weapons being removed (it doesn't appear that charged were layed in the alleged assassination plot, however). 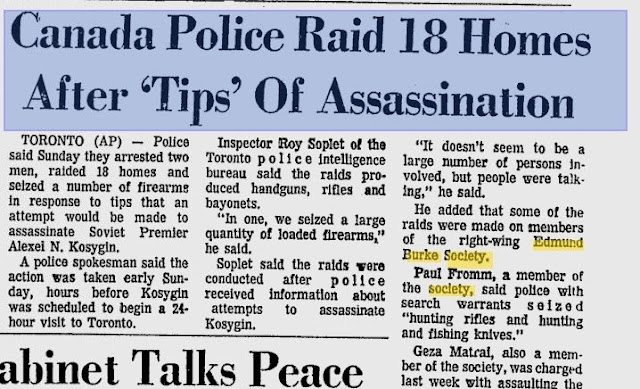 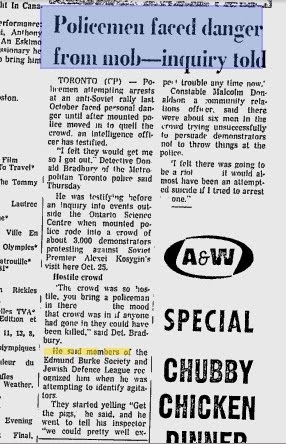 In the early 1970s, the Edmund Burke Society was re-named the Western Guard, becoming a more overt racist group with a National Socialist bent. As a member of the Western Guard, Paulie and some of the other members attempted to take over the Ontario Social Credit Party: 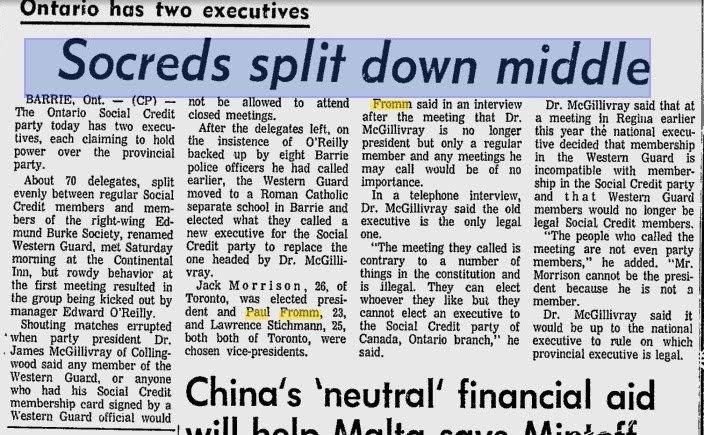 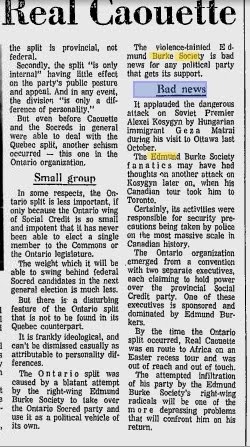 Finally, though Paulie now styles himself as a free speech advocate, such was not always the case. We've already noted how he and the Edmund Burke Society tried to shut down those who they disagreed with. As a member of the Western Guard, it appears that he may have targeted art as well: 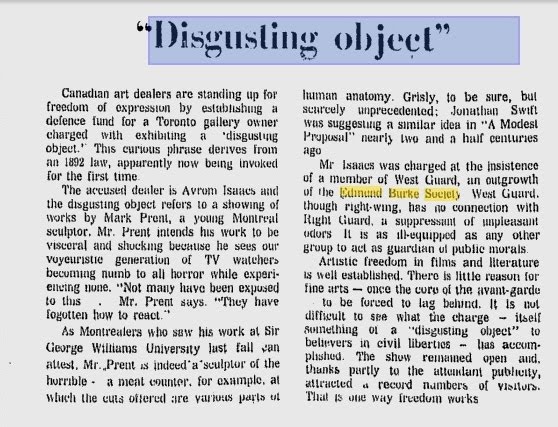 After a few months, Paulie left the Western Guard. In the early 1980s he began presenting himself as an immigration reform advocate, garnering a fair amount of press in the process. He was even referred to as a political analyst, so we suppose we shouldn't be too surprised when the media are taken in by his rhetoric.

We used to wonder why Paulie would support and defend groups like the Aryan Guard. Perhaps the answer is he sees a little of himself in them.
Posted by Kurt Phillips at 23:33

I really REALLY wish Paul would disassociate from the likes of the Aryan Guard.

I don't want illegal immigrants and so-called "terrorists" here either, yet, the inclination to disagree with illegal immigrants and alleged "terrorists" seeking assylum in Canada shouldn't be linked to neo-naziism and white nationalism. That's why I can't stand those dumb punks. Asking them to remove their unearned insignia and to put on a suit and tie is like asking these dorks to live without air.

The red ensign flag, the flag of which many of Canada's war veterans served under, is also being linked with neo-naziism and white nationalism. That's tragic.

Frankly this pisses me off. Some journalist you are, running a story about a racist without realising you did so.

Good backstory--shout-out at my place, and thanks for the link.

It is important to note Paul Fromm also had dealings with the Ontario PC party and was a member of the Reform Party.

I found myself shouting at the TV the other morning. Ridiculous that our corporate media is so out to lunch that they would give this guy the national spotlight. Embarrassing, even.

Anonymous 1:
Your bias is showing. Perhaps you should read up on immigration policy before offering your opinions on legality?
All Europeans arrived here the same way.

Fascism is fascism, I don't care what you hide it behind.

Anonymous 2:
Bah, I won't even dignify that with a response.

Was kyle mckee at this "protest" of the aryan guards? If so was he there with people he is not allowed to be around because of his new charges?

Anonymous 2 here, I was saying you as in the journalist that had interviewed Fromm (or whatever happened, I dunno, the video won't work for me), not you as in...you. Your response gives me the impression you misunderstood me.