As we approached March 21, the some of the folks on Nexopia were asking an obvious question of the boneheads:

An answer of sorts was provided by someone who appears to have links to the Aryan Guard, the rival of W.E.B.:

"Murder.Squad" then goes on to expand on his earlier response:

Now, it's not a surprise that a person with ties to the Aryan Guard would be dismissive of anything W.E.B. tries to pull off. Also not surprising is that John Marleau is echoing these sentiments on the Blood & Honour forums: 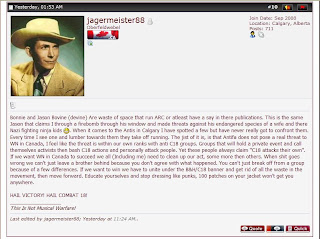 Uhm, neither Jason nor Bonnie have anything to do with this blog, Johnny. If they did, don't you think they'd admit as such? It's not as if they're delicate flowers who are too shy to be public. But we know how frustrating it is that you've no idea who is behind the blog. It's okay. We understand.

And you're making fun of anyone's appearance or weight John? You know what they say about people who live in glass houses, Johnny......

In reality, Marleau is full of it. Word is that he won't confront anyone unless he has at least a couple of other people with him, and even then he's the last to enter the fray. But that's hardly the point here. Marleau tries to take the high road and say that they need to stop infighting. How long does he take the high road? Not very long. 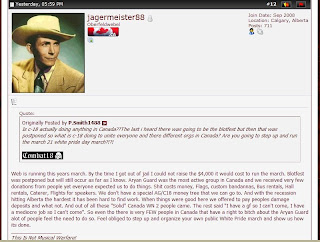 Doesn't seem confident that W.E.B. will be very successful. Also seems a bit bitter that not many people took the Aryan Guard up on their offer. And you're telling us that Paulie didn't pay his own way? We guess we know why he was willing to support the Aryan Guard while he was being paid. 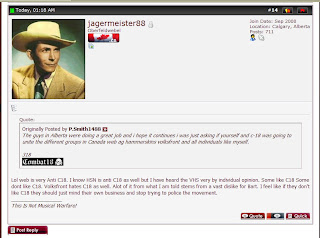 Curious to see how that goes down.

Awwwww! Does Johnny have a broken heart?

Well, speculation time seems to be over. Reitmeier posted the following on his Facebook page today:

Pretty short notice and quite abrupt. Seems all is not well in W.E.B. land: 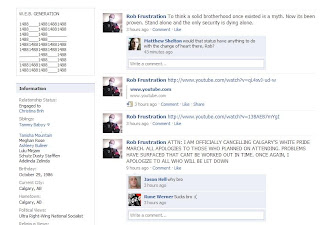 Sounds pretty bleak. Perhaps this has something to do with Robby's emo attitude: 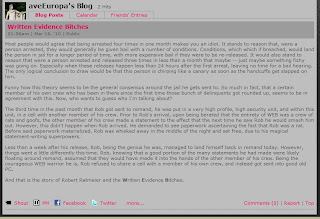 UPDATE: Regardless of whether the boneheads plan on marching or not, anti-racists are still planning on meeting and commemorating March 21 in the way that it was originally intended:

The International Day for the Elimination of Racial Discrimination is observed annually on 21 March. On that day, in 1960, police opened fire and killed 69 people at a peaceful demonstration in Sharpeville, South Africa, against the apartheid "pass laws". Proclaiming the Day in 1966, the General Assembly called on the international community to redouble its efforts to eliminate all forms of racial discrimination (resolution 2142 (XXI)).

Office of the UN High Commissioner for Human Rights

Committee on the Elimination of Racial Discrimination]

International Convention on the Elimination of All Forms of Racial Discrimination

Working Group on the Effective Implementation of the Durban Declaration

International Day for the Elimination of Racial Discrimination (Cyberschoolbus)

Fight Against Racism, Discrimination and Xenophobia

The additional resources links on this page are provided for information purposes only and do not necessarily represent an endorsement by the United Nations.

European Commission against Racism and Intolerance (Council of Europe)

International Movement against All Forms of Discrimination and Racism

Truly a shame, I was looking forward to watching that methed out dick stumble down the street on TV! Fuck!

Where in limbo does this leave ARC/ARA for March 21st?

again, i feel the need to point out that ara calgary and anti-racist canada are different groups. maybe if marleau doesn't believe it when arc says it, he'll believe it from the mouth of ara:

I think Natalie and Cheeseburger Terror Machine should put there parents computers to better use...Calling everyone else Rats is not really productive..Grow the fuck up and get lives of your own..I'm sick of reading bullshit rants from to young retards who do nothing but talk shit..This is not an x-box game these are peoples lives your fucking with..People wont take your shit forever!!!

I can't believe Fat John is STILL claiming to be C18. There hasn't been any of the sorts (asides from keyboard commandos claiming as such) since the early to mid
90's. That pudgy fuck is playing with fire, because it's not a smart thing claiming to be something you're not, especially if and when an actual member found this out.

I really hope ARC and ARA and all other groups with sane views on racism will still meet. Do not forget that the boneheads crashed OUR party, and not vice-versa...

Face it Nazis, you're outnumbered and outclassed

Ratmeier wouldn't go into the cell of Sturrup for fear of sturrup smashing him out. And it's not hard to tell you rat when you go to jail, and are out less then 24 hours later.

Also I'm pretty sure ARC and ARA Calgary have ties and connections to each other.

John Marleau should start his own group called Combat 180+

Unrelated, but of interest to ARC?:

Johns C-18 tattoo should be removed with salt and ice. And as for Natalie, talk about useless. I am sure even Kyle would tell her to keep her mouth shut by this point.

John the big c-18 commando talking shit on other wp groups from behind a cheeseburger....I mean a computer. I dont think the ARA needs to do anything here...Im sure some nazi who had enough of his talking will eventually visit him.

PS. The march always was and always will be the dumbest idea ever.

I appreciate the fine work you folks are doing. In March, 1992, at a rally for the International Day Against Racism in downtown Vancouver, a small group of swaggering, swastika flag waving Nazi skinheads showed up to try to intimidate the crowd. They stomped around the perimeter of the gathering, one pretentiously armed with a swagger stick, obviously trying both to intimidate and provoke. We ignored them, but I know some people were upset and frightened. I was furious. Your vigilance in tracking these vermin is crucial to Canadian democracy.

i hear from various sources that rob is no longer WEB, but the reasoning seems to vary from person to person...the vote appears to be split between family committments/him finally growing the hell up & being outed as a rat/statement writing on his closest friends.

Curious indeed as to why such a person was allowed bail repeatedly in such a short amount of time when his buddy is still locked up...personally i think this has "informant" written all over it.

Just an interesting fyi, on the 22nd the U of C is hosting some events in regards to the elimination of racial discrimination. Here's a link http://www.ucalgary.ca/stopracism/