UPDATE: The Alberta chapter of the SoO appears to have defected as well according to an article in the "Edmonton Examiner" dated February 8, 2017.

When we posted our article our article regarding the defection of the entire Saskatchewan Chapter of the Soldiers of Odin from the national and international movement, there was one part of the exchange between the former co-president of the Saskatchewan SoO and another individual who apparently also has some position of leadership within the SoO: 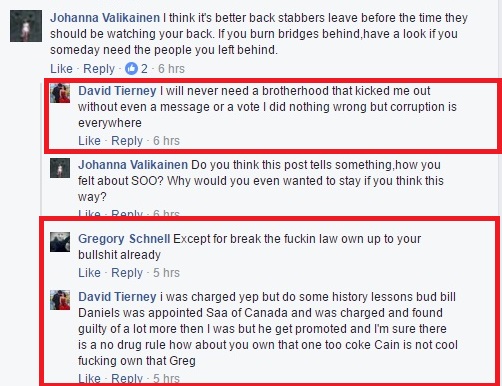 We'll deal with the second portion of the party we highlighted first.

This past October, the former co-president of the Saskatchewan Soldiers of Odin was arrested on drugs and weapons charges:

The Estevan Police Service (EPS) has made another significant drug bust in an ongoing effort to keep the city safe.

On the morning of October 20th, the Estevan Police Service Drug and Intelligence unit performed a search warrant, which lead towards the arrest of a 35 year-old resident of the city of Estevan....."As a result of the search six firearms, a pair of brass knuckles, eight containers of tannerite explosives, approximately 200 rounds of ammunition, 220 grams of marijuana with a street value of $2,200, and six grams of essentially mushrooms, as well as a quantity of cash were seized." added Police Chief Ladouceur.....The Estevan resident was recognized as David Tierney, who is facing one charge of possession of marijuana for the purpose of trafficking; possession of psilocybin; possession of the proceeds of crime; nine counts of possession of firearms and explosives contrary to a court order; two counts of unsafe storage of firearms; and one count of possession of a prohibited weapon.

A rather problematic charge considering the claims that the SoO was established to keep "the streets" safe. One would presumably be justified in asking, "protection from whom?"

But Tierney countered by noting that current BC President and National Sargent-At-Arms of the SoO has his own legal issues to deal with, including a 2011 arrest and subsequent conviction on similar drugs and weapons charges:

Mark NIELSEN / Prince George Citizen
June 4, 2015 09:43 PM
....
Crown prosecution had been seeking six months in jail for William Coady Daniels, 47, but provincial court Judge Randall Callan agreed with defence lawyer Fred Fatt that a conditional sentence was more appropriate.
....
Daniels was arrested in November 2011 when police seized 203 marijuana plants from a barn on his farm as well 11 baggies, each containing a half pound of marijuana ready to be sold.

But the court also heard Daniels turned to growing marijuana after injuring his hand. Despite eight surgeries, he was unable to regain his fine motor skills and had lost his job as a marine engineer at B.C. Ferries as a result.

Moreover, Daniels' worker's compensation payment were not enough to cover his mortgage so he was also in danger of losing his farm. Following his arrest, his wife left him.

We looked up Daniels' case online. We found the following court documents from 2015 which may or may not actually refer to the drug and weapons charges:

In looking up this information, we also found evidence of a much more recent legal entanglement: 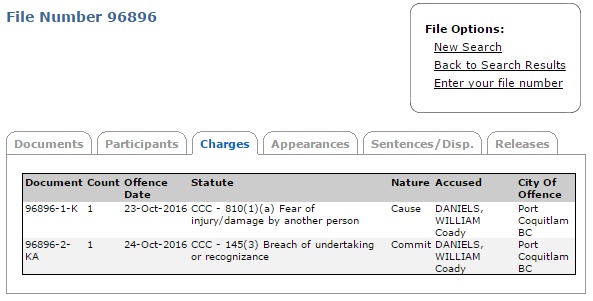 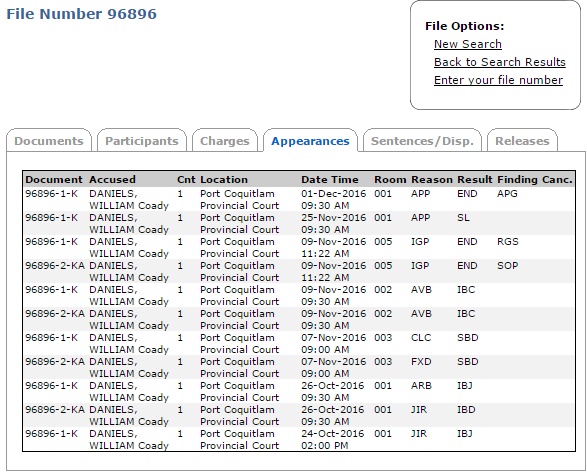 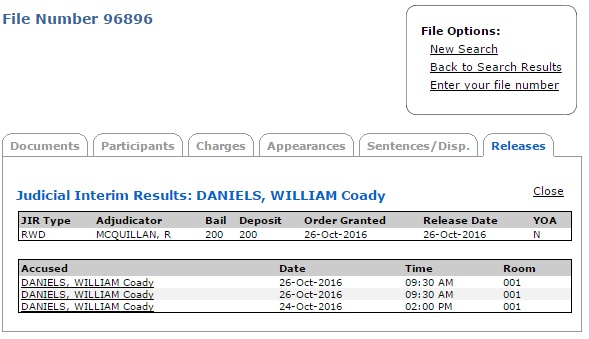 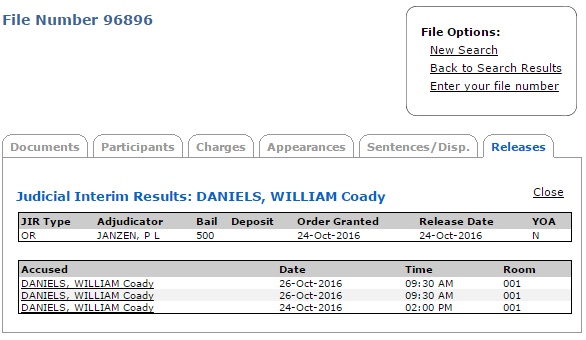 We looked up the specific charge in the Criminal Code of Canada:

Our reading suggests that this may very well be a domestic case; the article concerning Daniels' arrest and conviction on drugs and weapons charges indicate that his wife had left him as a result of his legal entanglements. Did he threaten his ex-wife? A girlfriend?

Again, as a leader in a gang that presumes to function to protect society from those who would abuse, "our women" this particular charge might lead a number of very uncomfortable questions that the SoO should perhaps address. I mean, the SoO is there to protect the women folk, except for those women folk who happen to be in relationships with SoO members?

Suffice it to say if anyone reading this has any more information on the sec. 810(1)a charge, we would love to hear from you.

Getting back to that first point Tierney makes regarding allegations of corruption, we've received some rather interesting information on that file as well from a source with knowledge of the inner workings of the SoO.

We've noted that a number of SoO members were closely linked to motorcycle gangs, specifically the Hell's Angels. Despite the denials by the leadership at the time who claimed our reporting on the issue was false, the fact was that there was a real struggle within the leadership of the SoO over the issue with most provincial leaders rejecting any ties to motorcycle gangs according to our source. The national president Joel Angott evidently suggested that upon polling membership that most were in favor forging such ties as a means of ending the debate, but as it turns out he only polled members of the Manitoba chapter which, it so happens, he was also in charge of. This revelation appears to have cause more than a little bit of internal problems that they did their best to cover up.

The other problem that emerged is that though the SoO was supposed to operate on a democratic basis allowing provincial leaders to vote on various issues and proposed policy changes, Joel Angott and his allies essentially ignored votes that didn't go in their favor or simply ignored the rules that had been established for the governance of the SoO. For example, our source has claimed that there was an effort to move the Canadian SoO away from the founding Finish movement because of the overt racism of the SoO in Finland (you know, being founded and led by a neo-Nazi with multiple racially-motivated assault convictions and all that). This was more than likely primarily a public relations effort, but even that was undermined by Angott. In fact according to our source, all "clubs" were expected to send $25.00 to Bill Daniels who would then forward the money to Mika Ranta in Finland as a "tribute" of sorts. We don't know if this tribute was to be a one time gift or if it would be ongoing, but it appears to have been a bridge too far for the Saskatchewan chapter based on our reading of the exchange found on Tierney's Facebook profile.

Speaking of money, that was another bone of contention as numerous accusations of financial improprieties have been leveled at many in leadership positions: 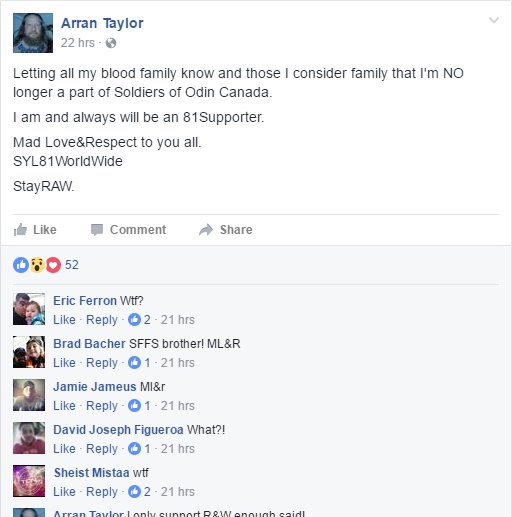 Arran Taylor, Ontario SoO president, was accused of theft of $700.00 which had been set aside for members' "gear" resulting in his leaving (or being kicked out) of the SoO. However he is back as a member in good standing and we presume heading the Ontario chapter once again. Our source has told us that Taylor admitted to the theft, but Bill Daniels later covered the $700.00 so that Taylor could remain in the SoO. Another SoO leader, Claude Torma, was also allegedly ousted for theft ($40.00) but was reinstated and is still currently leading the Northern Ontario chapter. Other leaders have also been kicked out and reinstated according to our source for other reasons. Kris Kristopher had been the BC provincial leader but was removed for "lying to leadership" and "endangering members lives" (whatever that means); he is back in the fold though his position has been assumed by Bill Daniels. As we reported, Jody Issel was removed from SoO for his views but after a week was invited back (it's also clear that there had been an attempt to remove Issel, who was once the Moose Jaw chapter leader, but he was defended by the Saskatchewan co-presidents).

Perhaps the most interesting allegation made by our source is with regard to personal information:


Bill [Daniels] and Joel [Angott] made rules that every member will give up all personal info on paper. Everything minus social insurance number. Still too much.

The reasons for this seemingly newish policy aren't entirely clear, though it should be a cause for concern for the existing membership of the SoO. 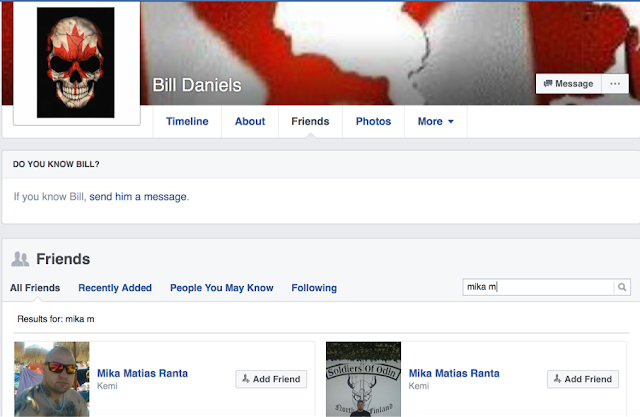 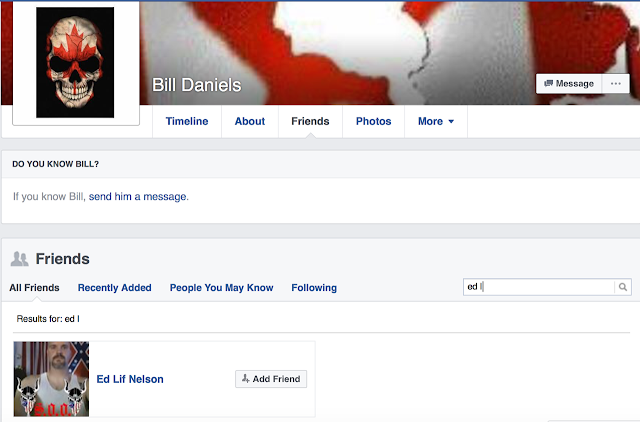 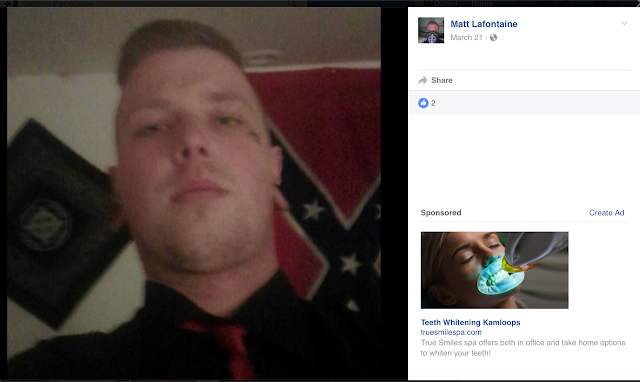 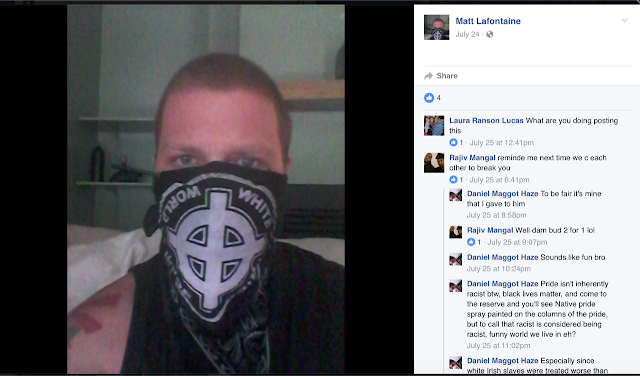 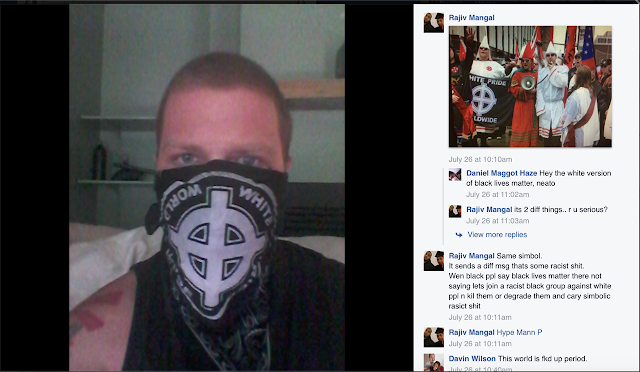 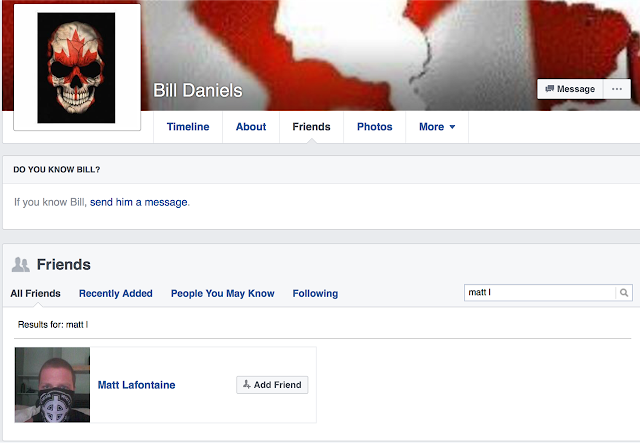 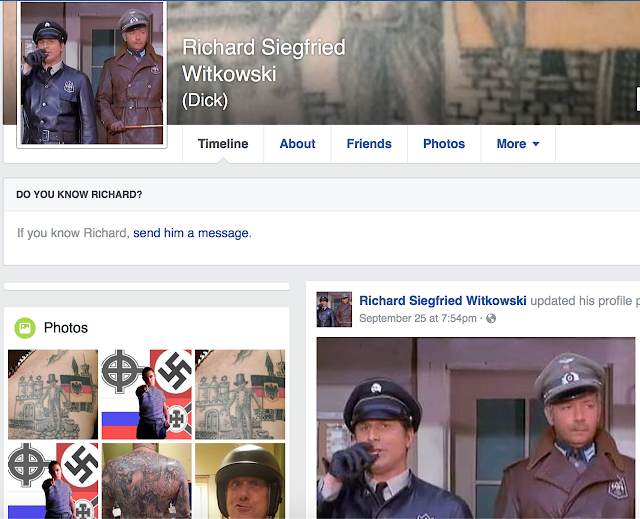 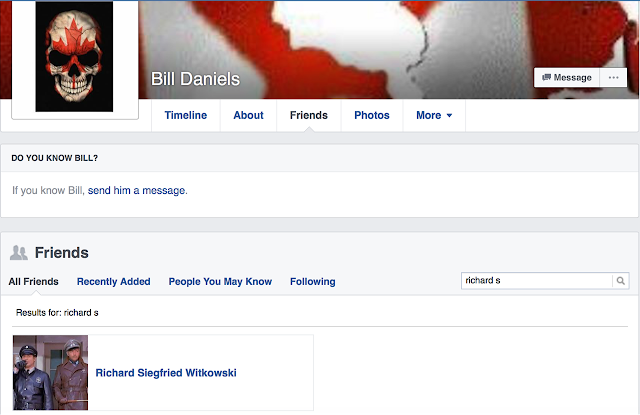 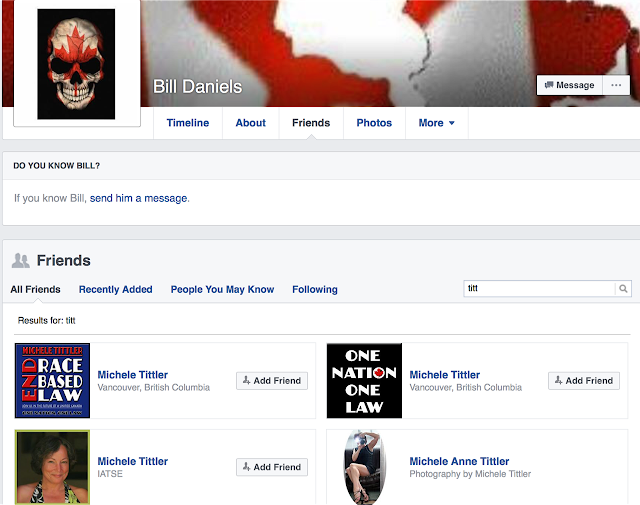 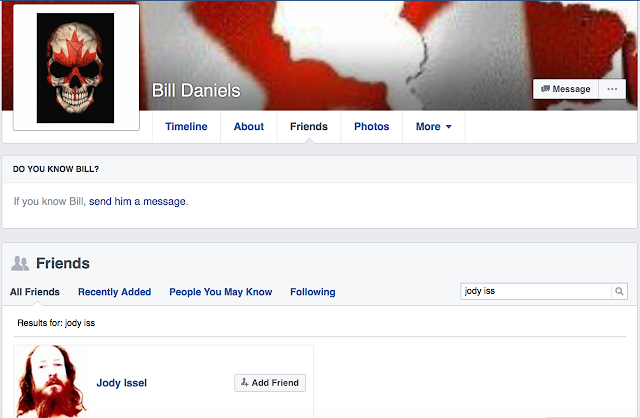 It's all a sham.SOO are a want to be biker group...Trust me I know... Most members with full membership are bikers 80% of their members "support 81 aka hello angles " but they can't make it into H.A so they join SOO. Anyone who joins without the "biker look" or history are looked at as kids and treated like second rate non official members. If you knew the as I do...who runs what you'd see its all bikers at the top always . You can't get anywere with SOO unless your a biker and the more violent the better. The leaders you'll notice NEVER go to protests or anything they send their underlings 9 time out if ten to do their work for them. It's a bullshit organization made to draw in young guys and sell them gear (sweaters,hats, shirts ext) and make them feel they are part of "the club " when in fact it's all bullshit. Only bikers will ever make full member. Then after they get money from you they will ethier kick you out or make you want to quit by teasing or bugging you or getting other support members to start arguments ext. The whole Canadian SOO is just a massive e fund raiser for the REAL SOO in Finland and other European country's. As are Australia,USA,and any other western county's chapters. FINLAND is REAL SOO they are far right wing neo nazies . They unlike Canada all have full membership no bs prospecting lol they arnt want to be bikers they are more like hooligans. They take the international money and use it to build club houses and everything. To close all non european chapters are just a bunch of want to be bikers and real bikers making money if the right wing guys out here and funneling it to the real European SOO. The group is a crock of shit based on european anti immigration groups, the titles are all bullshit it's a joke with morons leading the whole deal.