When we wrote about Conservative leadership candidate Kellie Leitch's call for testing would-be immigrants to determine if the possessed "anti-Canadian values" that should disqualify those immigrants as potential citizens, we noted that this proposal had all the hallmarks of dog whistle politics; she could claim that her proposal didn't target any particular group while appealing to people who hear the whistle as targeting Muslim immigrants as well as Muslims who were already citizens either by birth or naturalization. We also noted the irony that many of those who support Ms. Leitch's proposal, by their own rhetoric, often embody the anti-Canadian values that the proposal aims to eliminate such as intolerance towards other religions and homosexuals as well as violent and misogynistic behavior.

With this in mind, we decided to examine the views of one specific individual who supports Ms. Leitch and her proposal and who is a familiar character profiled here on the blog, albeit one whom we haven't mentioned in some time since the demise of Free Dominion, as a sort of case study: 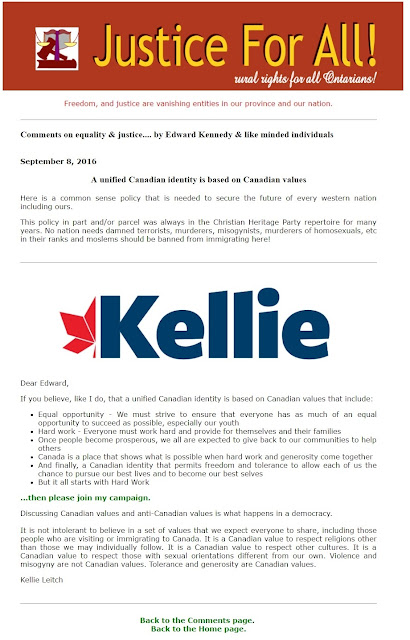 Ed Kennedy has remained quite busy since his regular stomping grounds at Free Dominion ceased to provide him an avenue for his bigotry. He actually started his own website a bit before Free Dominion shut down, perhaps because he could see the writing on the wall (or perhaps because even the folks at Free Dominion were growing weary of him). In any case, he has continued to provide his limited readership with his wit and wisdom.... usually involving attacking "lieberals", "feminazis", African-American protesters, Muslims, homosexuals, and his own extended family in a series of bizarre rants regarding an inheritance he believed he should have received from a diseased aunt of whom he has nothing positive to say about.

Kennedy believes Leitch's proposal is "common sense" though he doesn't seem to realize that, given Leitch's criteria, Kennedy's own views could be deemed to be anti-Canadian. In fact he appears to violate the value of religious tolerance in his explanation of why he supports Ms. Leitch's proposal: 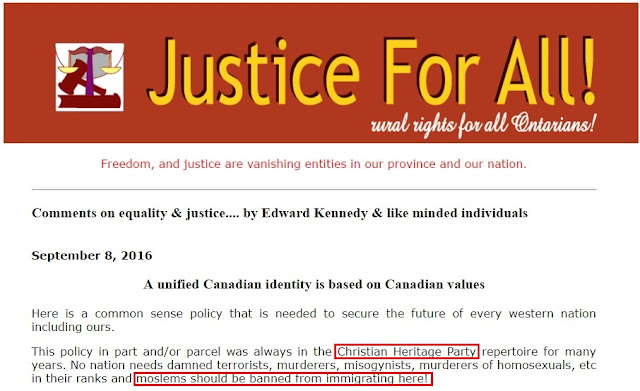 His own website is replete with examples religious and ethnic bigotry, misogyny, and calls for violence that if Ed Kennedy were instead named.... let's say Abdul Alhazred (our nerd readers will hopefully get the reference) people like Kennedy would point to this as a reason why a test to determine anti-Canadian values needed to be applied to potential immigrants. Here are only a handful of examples: 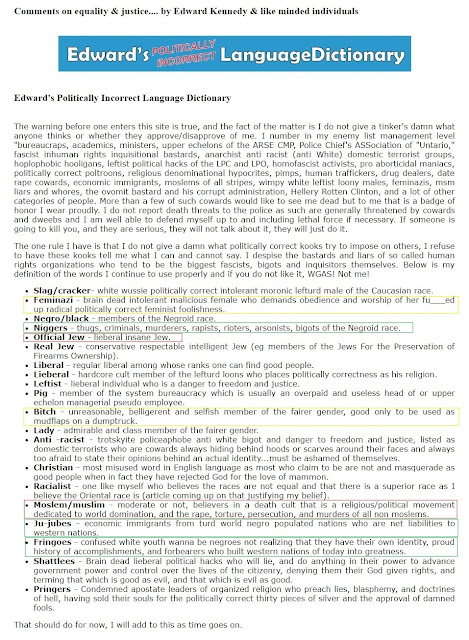 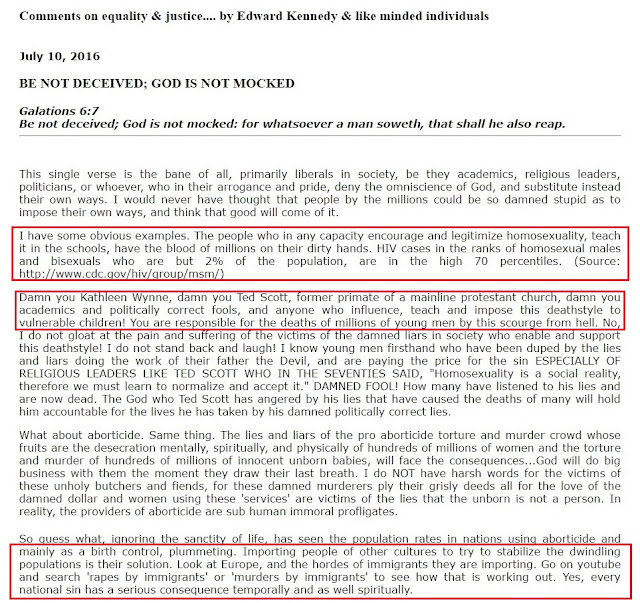 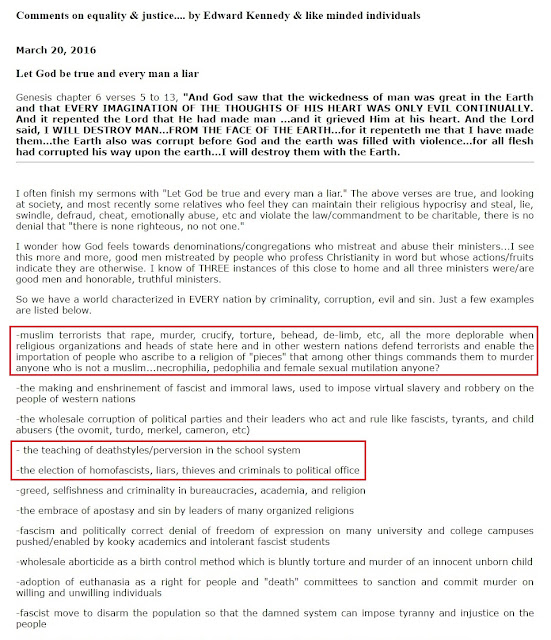 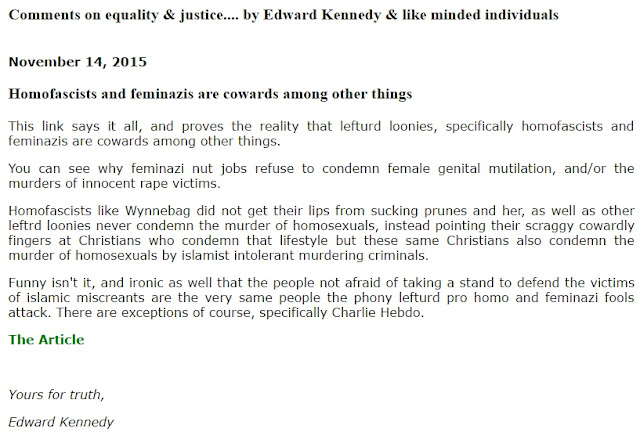 His past posts on Free Dominion, where he was a member in good standing for years, were even more extreme in their attacks on the same groups (his anger concerning Islamic extremists murdering homosexuals has to be taken with a grain of salt in light of his views regarding homosexuals as expressed in one of the following screen shots): 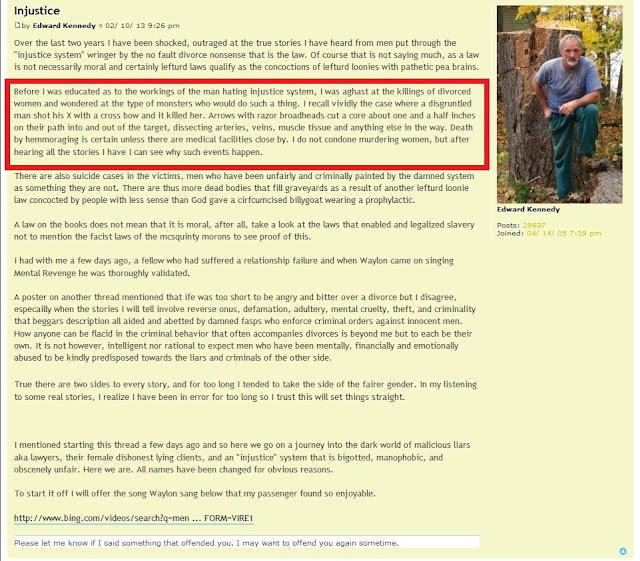 Do they apply to Kennedy or any other "old stock" Canadian who have the same values? Not a chance.

Kennedy might not even be aware of the cognitive dissonance in his view points, but he subconsciously knows that his wretched views do not represent the anti-Canadian values that Ms. Leitch outlined in her vaguely defined proposal. In order to be truly anti-Canadian values, the person expressing the values such that Ed Kennedy holds can only be defined as anti-Canadian if the values are held by a person with a duskier hue of skin.

And this is where we jump into the much maligned, but very real, concept of white privilege. Euro-North Americans are mainstream. Ethnic and religious minorities of certain classes are "other" and not really truly one of "us".

To further illustrate this point, we thought we'd look at a related issue.

The Black Lives Matter movement has been active for some time now and have been highlighting racial disparities in how African-Americans are treated by the police when compared to white Americans. Statistics and anecdotal evidence both back up the arguments made by BLM members. Given Kennedy's claims as a warrior for "truth and justice" that he might be sympathetic. Instead he dismisses any evidence of injustice and suggests that African-Americans are getting what they deserve and hopes for an even greater crackdown: 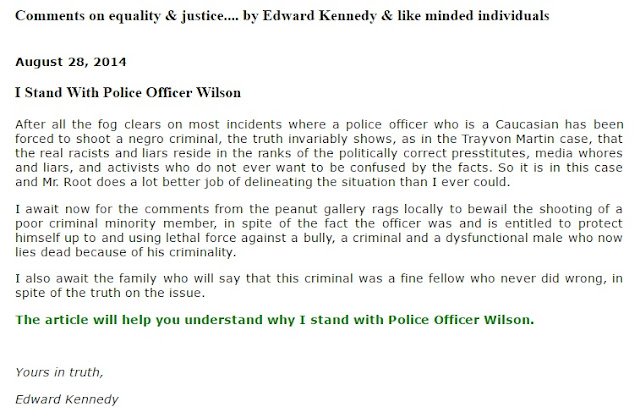 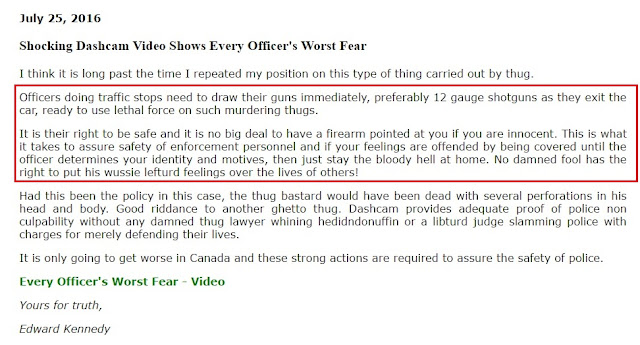 The last point is interesting actually. Evidence of systematic racism targeting African-Americans is dismissed by Kennedy, but one has to wonder how he would react to a Canadian police officer drawing his gun on Kennedy during a traffic stop?

Because, you see, Kennedy knows that real oppression and injustice is being stopped for not having a seat belt on: 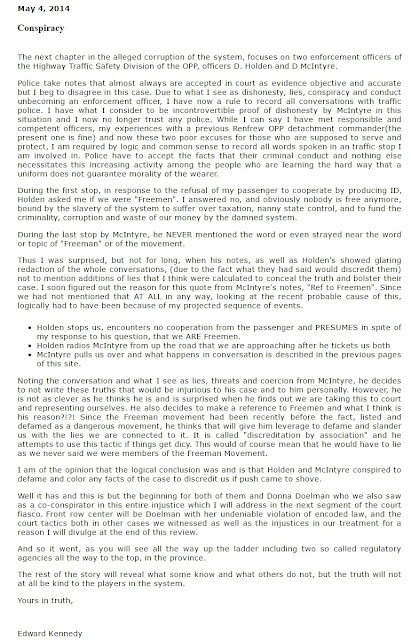 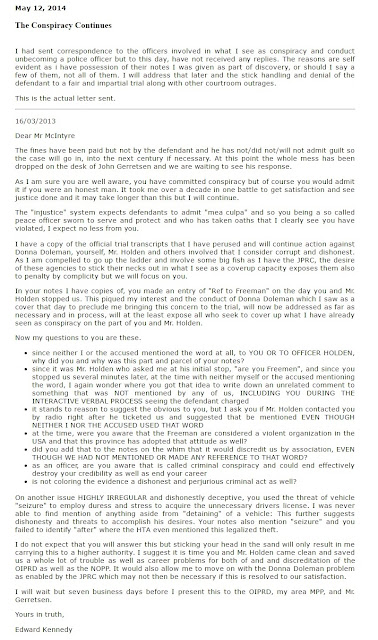 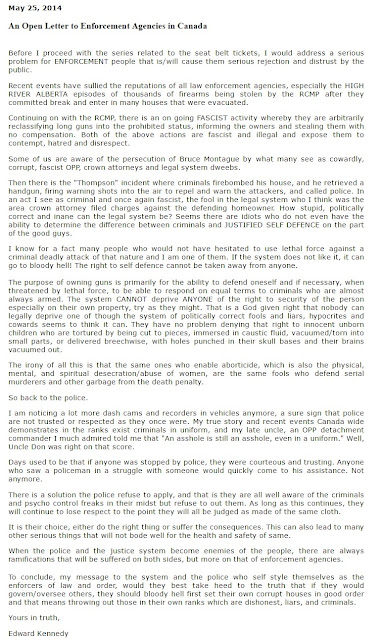 We actually don't really have to guess at how Kennedy would react to a police officer drawing his weapon on him as he spells it out in another article: 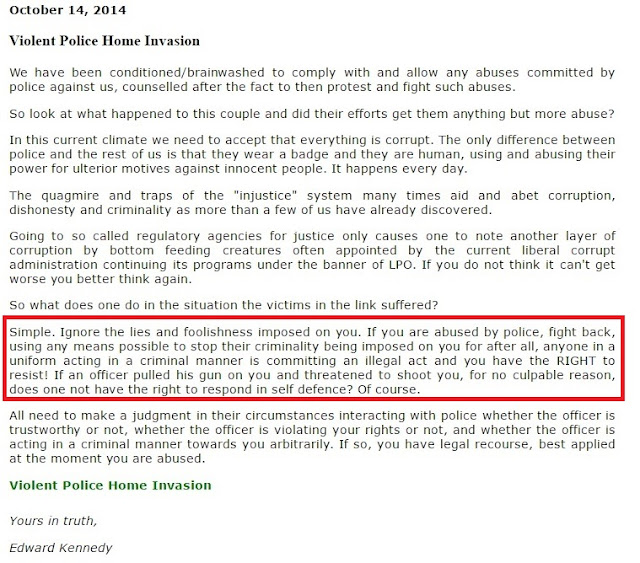 White people have a right to resist.

It also goes without saying that civil disobedience is something only white people are allowed to do. While Kennedy feels he and other Ontario Landowners should be afforded the luxury of protesting the "injustice" of local land use ordinances by blocking the entrance to a government building, people should have the right to kill First Nations peoples blocking a road when they protest:

Given this attitude, is it any wonder that Kennedy and others like him who support Ms. Leitch's proposal are unable to recognize their own hypocrisy on the issue?

But then they don't have to recognize it because Ms. Leitch's proposal doesn't apply to them. Nor does it likely apply to potential immigrants from Europe who don't share the values outlined by Leitch.

Kennedy and others like him know that the dog whistle applies only to certain groups and those groups, even if they pass the test, will remain suspect.
Posted by Nosferatu200 at 21:47