We had anticipated our articles (here and here) detailing the online misadventures of misanthropic shut-in Jonathan "vikingwarrior14" Kotyk could result in a bit of discussion back on Stormfront. That response, occurring a day after the second of the two articles, really was a joy to read.

"Canadianationalist" does make a good point about not feeding us low-hanging fruit. Thankfully, Kotyk proceeds to ignore that good advice:

Now, you see, it's stuff like this that begs to be made fun of. 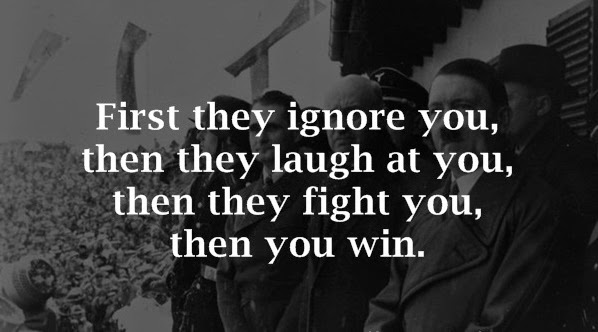 Yeah. Hitler didn't say this. Ever. Rather than being attributed to Hitler, that quote is actually attributed to Gandhi (though even this is disputed). 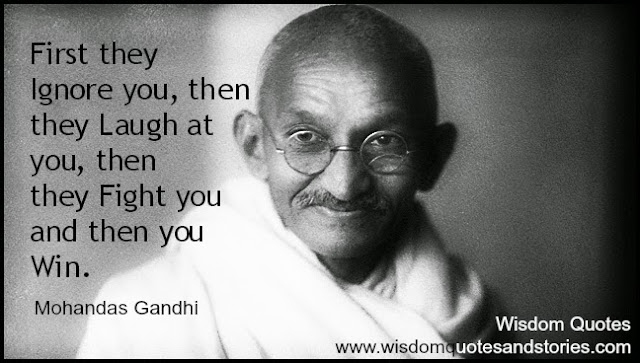 Gandhi was an educated pacifist who helped to free his nation from colonial rule by the power of active, non-violent, resistance. Hitler was a high school dropout who plunged Europe into the worst war in human history and almost destroyed the nation and people he professed to love.

Not really the same thing.

We don't know about you, but one would think that Mr. Kotyk might have checked out the source of the quote rather than open himself to other ridicule. But what do we know?

In order to help Jonathan Kotyk avoid any future faux pas, we took the liberty of finding other quotes that Hitler didn't say so that Kotyk could strike those from his list:

No Jonathan. We aren't afraid of you and we certainly don't want to shut you up. We expect you to provide material like this for our viewers for years to come.

There were some who felt our characterization of Mr. Kotyk to be unfair:

It's at this point that things become a little surreal. Kotyk posts a note intimating that he knows who the members of the Collective are:

Now he didn't come up with this himself. Someone else appears to have provided the information when he corrects an error:

We're sure that Jason Devine will be happy to know that the boneheads who follow this blog and who have insisted that he and his wife both wrote for it will be pleased to know that even boneheads can eventually take a hint. There is however still a significant problem regarding Kotyk's claim.

In the cases of the men from Calgary listed we've never even heard of their names before and have no idea who any of them are. In the case of the woman mentioned, we at first drew a blank as well until one of the actual members of the Collective remembered that we had posted an article she wrote as a freelance and published in "See Magazine" regarding the White Pride March that took place in Edmonton. If that makes her a member of ARC, then there are a hell of a lot of journalists who's articles we have posted here or who we've linked to who are members of ARC.

So no. None of the people mentioned have anything to do with the blog. Thanks for playing.

Also, we have another person who appears mighty confused:

We aren't quite sure what to say about this, other than to assure our frightened friend here that no one from ARC has ever threatened him and that no one in ARC needs retraining. We are all gainfully employed.

But this would not be a Stormfront Canada thread without "Cydonia" offering pseudo-legal observations:

Right. None of that is true. And if even someone like Kyle McKee understands how ridiculous these claims are....

.... then perhaps "Cydonia" isn't the best person to listen to regarding the legalities of the Internet.

With all this in mind, Jonathan Kotyk has become a prolific poster on Stormfront and has already provided a wealth of material that we will present to our readers.

Not because he's a charismatic visionary who will one day lead Canada.

We'll do so because it's sometimes a lot of fun to pick low-hanging fruit.
Posted by Nosferatu200 at 21:37

So who is supplying this information on who the supposed writers of ARC are?

We honestly haven't got a clue, but whoever it was needs to keep their day job. Or just get a job. We're assuming that he/she/they are indigent. ;)

Def Leppard? I love those guys but I'm pretty sure the original quote is Neil Young's.

"Better to burn out, than to fade away"... Originally, by Neil Young on Hey Hey My My.

Hahahaha Kotyk is a Jewish last name this guy is probably so jewish that he could immigrate to Israel either he knows & is hiding it or he doesn't realize it...

Why even give these people the light of day? koytk looks like he can barely get off the couch to resupply is snack tray never mind start a revolution or anything close. By giving these people attention you are almost making them seem like they matter when they don't.. I get its funny to make fun of these people but these kind of people thrive off the attention it does the exact opposite that this blog set out to do..