Ron Paul, a Neo-Fascist, and The Birchers Are Coming to Canada

A while back we began wondering where Andrew Benson ended up.

Our readers remember who Andrew Benson is, right? 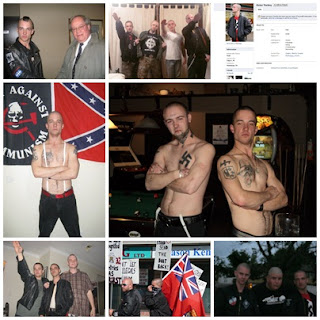 Whenever one of the folks we've paid attention to in the past falls off our radar, we become a little curious to see where they've ended up. Sometimes they are in prison. Other times they've rejected racism and have tried to make themselves useful human beings. And in the case of Andrew Benson, a man who before he identified with racist boneheads had tried to ingratiate himself to radical Marxists, he tries to reinvent himself again.

So the one time communist, then fascist, is now a libertarian: 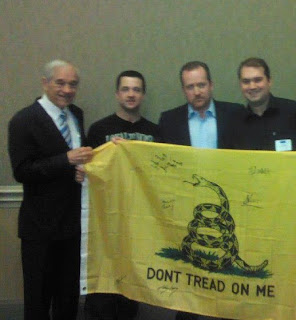 That's Benson next to Ron Paul, hero of the "let him die" crowd of radical individualists.While it might seem to be a big stretch for Andrew Benson to align himself with the Ron Paul crowd, we aren't entirely sure that the beliefs of many Paul supporters aren't congruent with the beliefs of Calgary's own Aryan Guard or WEB.

After all, Ron Paul himself once proudly published a newsletter in which racist missives could often be found.

Which actually brings us to the point of this article. Ron Paul is coming to Canada to speak at a conference organized by the Fatima Center.

So, what is the Fatima Center?

The International Fatima Rosary Crusade, known popularly as the Fatima Center, takes its name from Fatima, Portugal, the place where the Virgin Mary is said to have appeared to three peasant children in 1916 with a series of revelations. The center was founded in 1977 by Father Nicholas Gruner, a Canadian who became obsessed with Fatima after an Italian priest told him that he had a special calling to promote devotion to the Virgin Mary. The following year, Gruner launched The Fatima Crusader, a quarterly that Gruner claims now has some 1 million readers. The publication has carried anti-Semitic articles such as the 1992 piece, "The Program of Christ Against the Plans of Satan," which denounced what it saw as Jewish "naturalism" and blamed Jews for putting "the Christian state in danger." The Crusader also has staunchly defended the work of Father Denis Fahey, a hard-core anti-Semite whom it called "brilliant." In an interview with Catholic scholar Michael Cuneo, Gruner accused a fellow radical traditionalist, E. Michael Jones, of being "secretly a Jew" who was "planted in the American Church to confuse Catholics and sow hatred against people like myself." The Fatima Center heavily promotes a conspiracy theory about the Vatican allegedly working to hide the so-called "Third Secret of Fatima" from the faithful. (Among other things, the theory accuses Pope John XXIII of making a blasphemous pact with Moscow that prevented the Vatican from denouncing communism and has resulted in Satanism flourishing "inside … the Vatican itself.") In 1995, Gruner was ordered to report to his bishop in Italy, but did not; as a result, the Vatican suspended Gruner from his priestly duties in 2001 (a lesser sanction than excommunication). Gruner owns a share of Catholic Family News, helped publish the schismatic book We Resist You to the Face, and is a regular speaker on the radical traditionalist circuit. In 2005, for instance, Gruner told an audience at the annual St. Joseph's Forum conference that Masons -- by which he meant the Jews -- "sacrificed their babies to the pagan gods." Gruner also rubs shoulders with hard-line Holocaust deniers, selling his wares at a 2006 conference of the anti-Semitic Barnes Review.

In addition to Ron Paul, there are three other attendees of note:

Roberto Fiore, an Italian neo-fascist, leader of Forza Nuova, and member of the European MEP who has been described as, “absolutely the most extreme person who has ever served in the European Parliament.”

John F. McManus, president of the John Birch Society which is, yes, still actually around to propagate wild conspiracy theories about the 1960s Civil Rights movement, the United Nations, and fluoride in water.

These names didn't really surprise us given the type of organization the Fatima Center is. But finding the schedule of speakers and learning General Roméo Dallaire is also a scheduled speaker was disappointing: 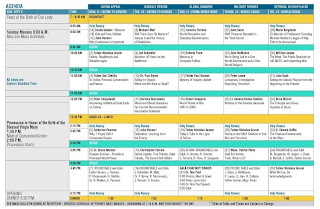 We really hope this was a mistake and that General Dellaire was unaware of the views held by the Fatima Center and, once made aware, will decide to cancel the engagement.