The report by the Canadian Security Intelligence Service lists Freeman members among “domestic extremists” who associate with issue-based causes, such as environmentalism, anti-capitalism, anti-globalization and far-right racism.

“Individuals associated to this movement are a concern because some followers advocate violence to promote their views and this may involve violence toward police officers,” Sgt. Julie Gagnon said in an email. “There are officer safety concerns when dealing with followers of this movement during routine police interaction.”

Last month, the Anti-Defamation League published a report that described the so-called “sovereign citizen movement” as “one of the most problematic domestic extremist movements in the United States,” attracting mostly middle-aged or older men who are financially stressed, angry at government regulation or who want “something for nothing.”

The report cited the 2010 shooting deaths of two West Memphis, Ark., police officers during a traffic stop. The suspects, a father and son who were later killed in a shootout with police, belonged to the sovereign citizen movement.

Earlier this year, a Nova Scotia jury convicted a man of uttering a threat to kill police officers and for multiple firearms offences. Court records state that Daren McCormick, a Freeman on the Land follower, told an officer that he could outdraw police and that if a police cruiser ever pulled up in his yard, he’d kill the officers. When police moved to arrest him the following day, they found him with a loaded .44-calibre revolver in a holster strapped to his hip.

McCormick asserted that the doctrines of Freeman on the Land free him from the Criminal Code, including its gun laws, and that he was free to carry a gun even to go grocery shopping, according to the records. He also claimed his right to travel highways without a licence or registration.

Given the focus of this blog, and our understanding of the sovereign citizen movement in the United States which is linked to violent, and often racist, extremism, we plan on directing our focus on that area of the Freeman movement.

Long-time readers of this blog are already familiar with names such as Eldon Warman (more information on Warman here) and David Lindsay. But we've neglected to write about Manitoba's Dean Clifford.

Last February, CBC aired a story on the Freeman movement. While his name wasn't mentioned, Clifford's YouTube videos were prominently featured at the beginning of the video as he challenges police officers during traffic stops. And though his name wasn't mentioned in the article posted to the CBC website, he did post a couple of comments in response: 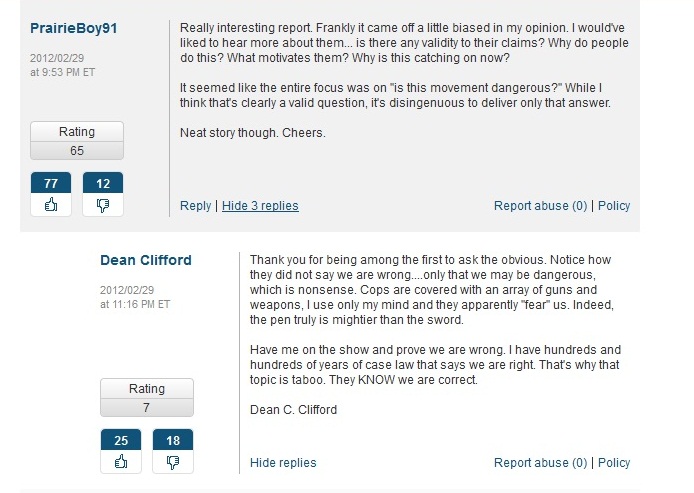 Interesting thing about Dean Clifford is that not only is he a Freeman himself, but he also earns a living (at least in part) giving lectures on how you too can avoid paying taxes:

This all brings us to why we are interested in Clifford.

When Bill Noble was released from prison, he began posting online again in spite of the conditions of his release. His justification for the violation of the terms of his release appeared to be straight out of the detaxer movement. Turns out we were right. It also appears that the person who sold Bill on this argument was Dean Clifford: 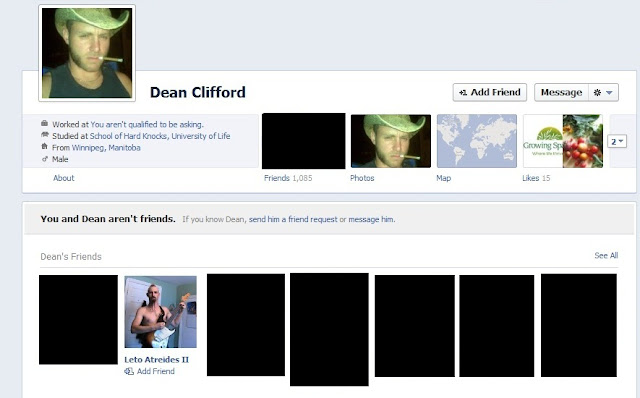 Before we knew Dean Clifford by his real name, we had become very well acquainted with his online pseudonym "Sovereign."

And as racists on Stormfront go, he was/is one of the nastier ones: 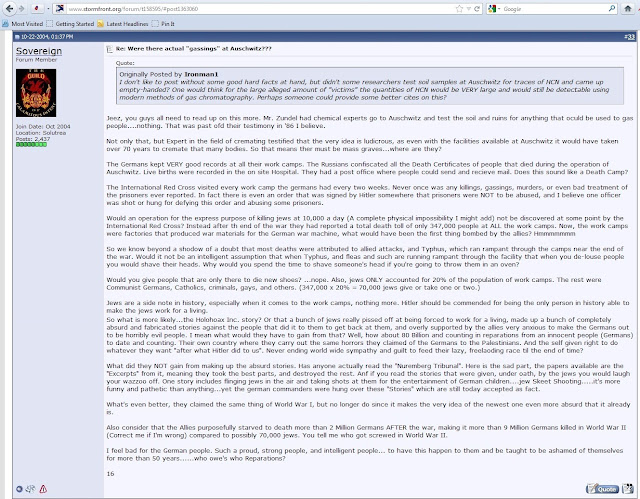 A lot of Dean "Sovereign" Clifford's posts are re-hashing of Freeman anti-income tax arguments; Eldon Warman appears to have been one of the individuals who steered Clifford towards the Freeman world-view: 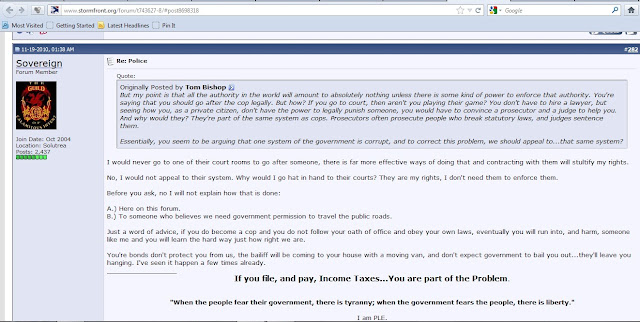 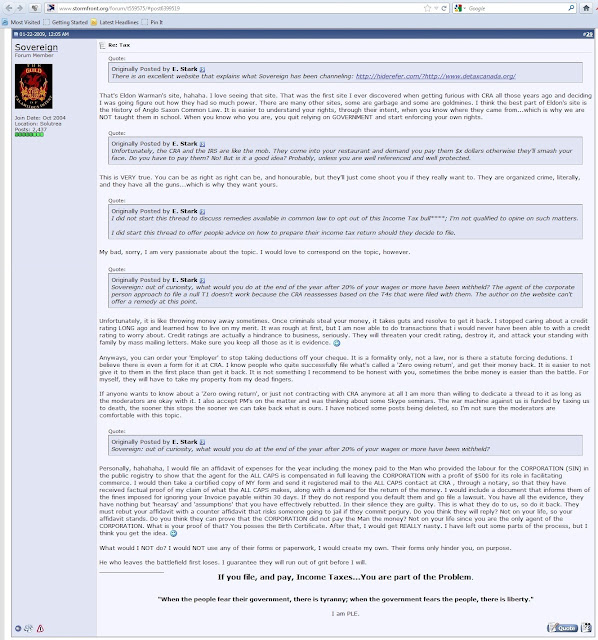 We would have focused on Clifford due to the vileness of the racist rhetoric anyways (much of which might actually violate Canadian hate crime laws, by the way) but his anti-tax kookiness may just have been looked at as a particular personality quirk had we not been aware of the actions of individuals with a similar belief in the United States. However it is through Clifford's support for other tax protesters, as well as their methods, that one begins to understand why the Freeman movement is cause for concern. We mentioned the cases of Edward and Elaine Brown and Joseph Stack earlier in this post. Clifford turns out to be a big fan of both:

Through these posts, we get an idea of Clifford's support for violent retaliation. But only an idea. He has also written much more overt calls to violence, which he characterizes as self-defence:

More specifically, Clifford justifies the murder of three police officers in Pennsylvania by Richard Poplawski who was an active member of Stormfront:

Not every adherent to the Freeman philosophy is a racist or violent; many are likely just dupes who have been conned the Freemen or detaxer leaders making money by victimizing people who are in desperate financial situations and are looking for help. However it is an ideology that seems to attract extremists.

The authorities are right to be concerned.
Posted by Kurt Phillips at 16:16

What happened to ex-Calgary and Montana Freeman standoff participant Dale Jacobi? has he been released from US prison? Is he returning/has he (been) returned to Canada? Dopes he have citizenship that would allow him to stay in the US?

Do the bail conditions on the accused Killam RCMP shooter not to associate with the so-called Freemen reflect his activities, his associates or both?

can you please post some proof that sovereign is clifford please? Otherwise, it appears you are only making assumptions, and whether they are educated or not, is moot. Proof please, or I call bs. No doubt sovereign is one nefariaus person, but how did you come to the conclusion that clifford is him?

Dean Clifford has ripped many people off their hard earned wages. Because of this there is no doubt that any number of people have come forward to unveil his stormfront persona. Myself included.