Yesterday, in the middle of a lighthearted article we posted on the blog, we included the story of a murder that took place sometime on November 27. Kevin Goudreau, who's no stranger to those who are readers of this blog, claimed that the accused was his half-brother and the victim his stepmother: 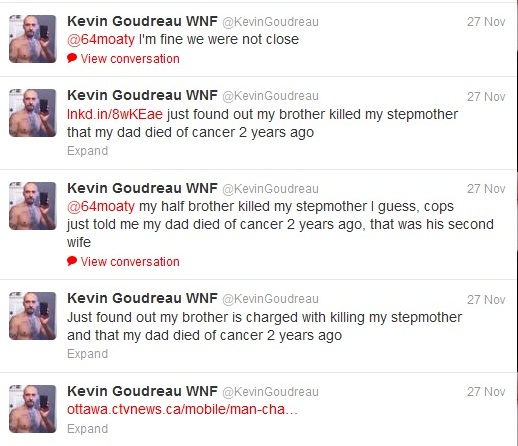 Given the nature of what Goudreau has written in the past, we did view this claim with some skepticism, however there was something about it that actually seemed more authentic than his regular ravings. So we did some research.

This morning we were contacted by one of our friends who was able to confirm that Kevin Goudreau and the accused are half-brothers and that the victim was his stepmother.

On the surface while this murder is connected to Kevin Goudreau only through his relationship with the accused and the victim (and it seems apparent that he was estranged from his family), our friend did point out to us something that really stood out for us and which is mentioned in some news coverage of the incident:

Rene Goudreau, who is charged with first-degree murder of his wheelchair-bound mother, 53-year-old Lucie Goudreau, has a long history of mental illness, including schizoaffective and bipolar disorders, according to Ontario Review Board documents obtained by the Sun.

Consider this information regarding Rene Goudreau. And consider that some families have histories of mental illness.

Do these posts by Kevin Goudreau then make a little more sense given this context? 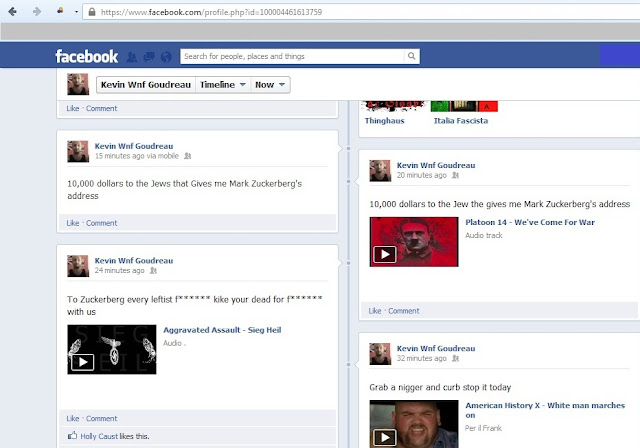 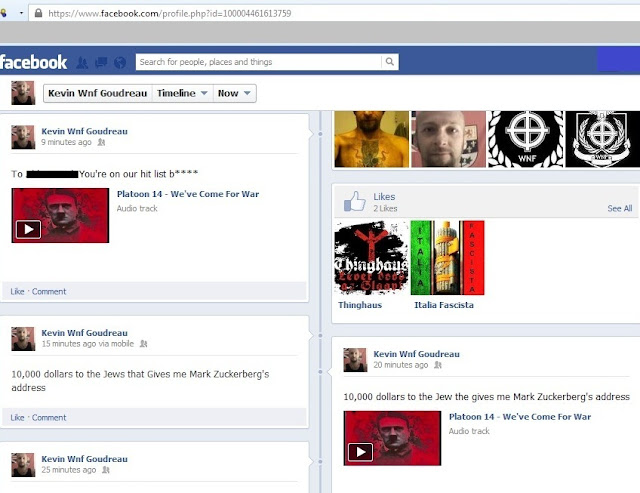 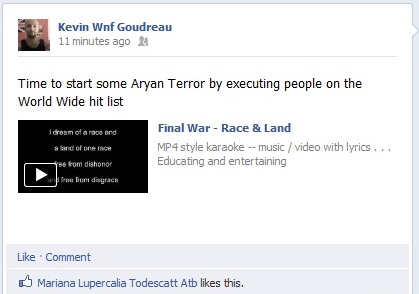 Are these not indications of a man who's mind is divorced from reality?

Well, yes. We all already knew that, but perhaps this is more serious than even we had thought it was.

We are sure the police are aware of Kevin Goudreau given the threats he has made towards real people. If there is a history of mental illness in Goudreau's family, and as his brother is now accused of committing this terrible crime, we would urge action on this case not only to protect those he has threatened, but also to protect Kevin Goudreau from himself.

Rene Goudreau, who is charged with first-degree murder of his wheelchair-bound mother, 53-year-old Lucie Goudreau, has a long history of mental illness, including schizoaffective and bipolar disorders, according to Ontario Review Board documents obtained by the Sun.

They paint a troubled picture of Goudreau. According to his own interviews, he experimented with alcohol at 13, marijuana a year later. After dropping out at 19, he bounced between jobs, including tele-marketing, fast food and construction.

He stayed now and again at his mother’s Woodridge Cres. apartment where her body was found after a Tuesday morning morning.

In 2010, after his 56-year-old father Jacques Goudreau died of cancer, he moved back with his mother.
Goudreau had reconciled with his father. He had been ordered to have no contact after he broke down his father’s door and attacked him in 2008.

It started when Jacques locked Rene out, but after the attack and the arrest, his mother let him back into the apartment the next day. In 2008, he was found not criminally responsible on charges of assault causing bodily harm, assault and intent to resist arrest and mischief.

And it was Lucie who told doctors in 2010 she “very much appreciates” Rene living with her since she has multiple sclerosis and depends on him daily.

The ORB ruled in Oct. 2010 that Goudreau was “not a significant threat to public safety.”

At the time of the attack, Goudreau was manic, and as long as his symptoms were controlled with medication, the chance of another violent incident was “unlikely,” the documents stated at the time.

Goudreau started psychiatric care in 2004 at the Ottawa Hospital after being arrested by police for trespassing.

There were other arrests and hospitalizations — once for breaking a bus window in 2007 and when he was caught running naked down the street.

Goudreau had a history of not taking his medication, mild substance and alcohol abuse, the documents suggest.

In 2008 and 2009, Goudreau was deemed to pose “a significant threat to the safety of the public.” Several times he was discharged to a subsidized apartment, where conditions included he refrain from alcohol or drugs, not have weapons and submit to random urine samples.

But in 2010, the review board changed its opinion.

Goudreau appeared in Ottawa court on Wednesday, where a judge ordered a 30-day psychiatric assessment to determine if he’s fit to stand trial.

He is not entering a plea, said his lawyer Doug Baum, because “there’s a concern about his perception of reality and understanding of the proceedings.”

“He does appear to be a little unstable — I think that is obvious,” Baum said outside court.

“There are some concerns, the court shares them, which is why a psychiatric opinion has been sought.
“He’s been ill for some time.”

Goudreau muttered incoherently during his first court appearance Tuesday, when Baum told the court his client had a history at the Royal Ottawa Hospital Mental Health Centre.

UPDATE: Seems the msm picked up on the Kevin Goudreau link as well, though this story really doesn't delve into Kevin's racist beliefs other than a brief mention of his, "leadership" of a one man organization.

UPDATE 1: Looks like the Goudreau still reads this blog. Word of advice, Kevin. You don't want to be perceived as being crazy? Stop saying crazy things.

UPDATE 2: Ed Kennedy of Free Dominion offers his friendly council to the, "skinheads" on who is the real enemy. 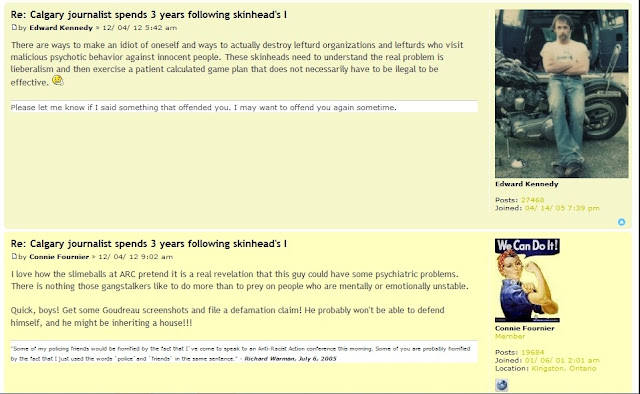