Samuel Langhorne Clemens once noted that, “there are no grades of vanity, there are only grades of ability in concealing it." And Mark, you're ability to conceal your vanity is abysmal.

Over the last number of years, Mark Lemire has been editing his own Wikipedia entry using the user-name, "Veritas-Canada." It has always been transparent that Lemire and V-C were one in the same. As Veritas-Canada, Lemire attempted to expunge any links to newspaper articles, B'nai Brith and Canadian Jewish Congress reports, and any other sources connecting Lemire to groups and individuals associated with the far right, as well as the fact he was the last leader of the Heritage Front. As a result there has been an ongoing edit war on the Marc Lemire article since late 2006.

Well, it looks like Veritas-Canada wasn't getting the job done so Lemire called in some reinforcements.

Oh, did we say "call"? What we meant to say was that Lemire CREATED reinforcements in the form of sockpuppets.


Yes, Marc Lemire created at least three sockpuppets (FairnessFairy2, MJMurphy-TREB, and RachaelMartinez, the first two of which have been confirmed) in order to white wash his history of involvement with the racist right (click here for the Wikipedia discussion that has resulted in Lemire being blocked from editing using his Veritas-Canada identity as well as the sockpuppets). What is especially hilarious is how brazen he is about the white wash. For example, the opening paragraph of the Lemire article begins like this:

Marc Lemire is a figure in the Canadian white supremacist movement, who works closely with neo-Nazi leader Paul Fromm, and is the webmaster of the Toronto-based Freedom-Site (which he began in 1996).[1][2][3] He is alleged to be a neo-Nazi himself, and has been called a "bigot" by Jonathan Kay of the National Post.[4] Formerly of Toronto and now living in Hamilton, Lemire is the last known president of the often violent Heritage Front organization from January 1, 2001 until the organization folded around 2005.[5][6]
Note that the information is sourced to credible and verifiable publications (well, "The National Post" is perhaps the exception). Now, let's take a look at one of Lemire's most recent revisions:

Marc Lemire is a certified computer systems engineer and human rights victim consultant based in Toronto. He is the webmaster of the Freedomsite, which is a resource of freedom oriented material, including the largest archive in Canada of information exposing the ravenous censorship of the Canadian Human Rights Commission. [1]
Wow. So revisionism ain't just for the Holocaust, hey Marc?


As much as we enjoyed that, we really appreciated Lemire's shameless attempt at self-promotion as he also added the following to his entry:

In 2006, Lemire won the George Orwell Free Speech Award for his courageous defence of freedom and open debate. [13] 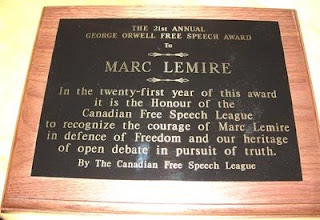 Well, "won" might be a bit of an exaggeration. In the incestous world of the far right in Canada, nepotism reigns supreme. The award was given to Lemire by Doug Christie under the banner of the Canadian Free Speech League which consists of himself and, well, that seems about it. Christie himself is pretty infamous for his defense of a who's who of the far right in Canada, his support for Western Canadian separation, and his own ethical issues as outlined by the The Law Society of British Columbia which found Christie has committed professional misconduct. Here's Lemire accepting the "award" from Christie: 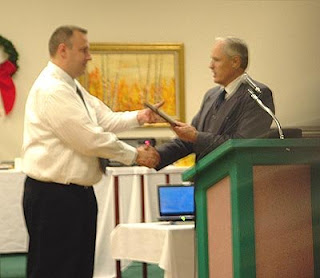 So basically we have bigots giving themselves awards in what looks to be a pretty small circle of people who already know each other.

Isn't Lemire adding his "award" to his Wikipedia entry sort of like a man adding, "world's best dad" to his resume because his kid gave him a mug that says as such on Father's Day?

Editing your own Wikipedia entry. And getting caught. Marc, buddy, can you make yourself seem any more pathetic and desperate?
Posted by Nosferatu200 at 09:44

So does this mean Lemire is behind fairnessfairy.blogspot.com?

We would bet that he is.