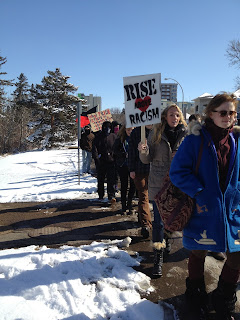 Just back from the anti-racist rally and march in Edmonton and I’ve got to say I’m disappointed in the best way possible. I’m sure the boneheads will claim all sorts of victory because they actually managed to get to street level for a bit (I’m not sure how long) but when you have to scurry back down into an LRT station behind a wall of police as soon as your opponents appear, that hardly seems like a victory to me. Anyway, I should probably start at the beginning.
About 200 of us gathered at End of Steel Park at noon. There were a few speakers, who were really good, but the crowd was getting restless. Intel was coming in that the boneheads were headed downtown to Churchill Square. So, we headed down Saskatchewan Drive with our police escorts, who didn’t seem to do much but stop traffic.

Across the High Level Bridge, through the Legislature grounds, down Jasper Ave to Churchill Square we went. I’m sure you folks know the drill: chant, crack jokes, have a few laughs, maybe bang on some drums. It’s generally a good time. By the time we got to Churchill Square the crowd was really loud. Tension was high. We got to the square and…

Yep. That was it. They popped back down the rabbit hole behind a wall of police officers and vehicles.

At this point I have to ask: Seriously, boneheads? That’s all you’ve got? You’re so proud of yourselves you can’t stay above ground for a few minutes when you come up against some opposition? Oh right. “Some opposition” is, like, ten times your number so I can see that being a bit intimidating.

Anyway, the antis tried to get into the LRT station via various entrances around the square, but the police blocked them all.

We regrouped, there were a couple wrap-up speeches and announcements and that was it, at least for my friend and me. I’ve heard the boneheads tried again at the legislature and were chased away a second time but I wasn’t around for that.

So why am I disappointed? As Nosferatu200 said earlier, it was kind of anticlimactic. I’m used to these events getting pretty heated and not even getting a glimpse of them was a bit of a letdown. (I’ll admit it. I find shouting at boneheads cathartic.) That said, it’s a good disappointment because the boneheads proved yet again that they can only gather in public when they face no opposition. They proved yet again that they can only hold their marches behind a wall of police protection and that they need the police to get them out.

We all know the boneheads will be sieg heiling over beers tonight, celebrating another “successful” march. They do that every year no matter how poorly things go for them. They can claim victory all they want, though, because it was us – the antis – who marched 5 kilometers, unimpeded, unopposed, enjoying a fine spring day (and the many, many honks, waves and cheers of support we received). Sounds better than scrambling around train stations, seeing the sun for a couple of minutes (did they even get down the block?), then scurrying away doesn’t it? I’d say so.

(By the way, this is just my account of today as someone who participated but didn't organize, speak, marshal, etc. I really look forward to hearing about other people's experiences because I'm sure everyone had different ones. And huge thanks and props to the organizers. You done good, kids.)

I'm proud of us as a city. The most important thing remains that we leave a clear message that it's never going to be cool here. And hopefully we don't even need to do it again next year. Good job Edmonton <3

I'm proud to be an Edmontonian and Canadian today knowing that our community doesn't agree with the hatred spread by these incredibly insecure neanderthals.

My father, who served this country in WWII would also have been proud since this clearly demonstrates that Canadians know how to honor those men and women that gave their lives to fight the Nazi regime. Despite our shortcomings of not always being sensitive enough to minorities in Canada, deep down we always know what is truly right and we will ensure that everyone in this country feels safe and is proud to be part of the Canadian family.

I'd just like to say.. To the brunette ARC chick on the LRT haressing BM Edmonton28 about a way out.. You are gorgeous!!! Stop being a commie. :)

I'd been looking forward to seeing you all year - the glint of sun reflecting off your pasty bald cone head, the way I can almost see your face behind the sunglasses and "White Pride" bandana, the way you goose step like the Fuhrer himself is watching. It all makes my heart pitter patter and the spring birdsongs seem even more sweet.

Alas, this year I find myself disappointed and (dare I say it) left wanting. I caught but a glimpse of you as you hid behind that police van. I saw but a flutter of the top of your flag as you ran away down the steps of Churchill Station. You left so soon.

I know you miss me too, you handsome devil. If you get this message, please respond. I can't spend another year not knowing if I'll see you again, my love.

Sincerely,
One of the many brunette commies you'll never have the pleasure of knowing because, well, you're a bonehead