Hey, How DID Things Go in London, BTW?

We received a note concerning the events of last Saturday in London, ON where Blood & Honour attempted to hold a march.

Suffice it to say, things could not have gone more poorly for them.

From one of the organizers:


People were ecstatic with how the day turned out, and likely inspired to continue doing day-to-day anti-racist organizing in that city. They [the boneheads] are really grasping for straws here to save face after what an embarrassment the 24th was for them. They are also claiming to have sent various amounts of antifa to the hospital (claiming anywhere from 1-4 people were injured) etc etc. But aside from that please keep me abreast of any chatter coming from them about the action. Fromm has got an article on it up on [his website] which is a stream of complete and total bullshit. Actually even claims we had hatchets?!

Max was driving the car, with 4 other boneheads. Him being the primary organizer, he effectively abandoned everyone else in the garage, which was then surrounded and had it's exits blocked for the rest of the afternoon. I can only imagine that the fash that came from out of town were a little peeved with him.

We did not get a ton of good pictures of any of the boneheads there unfortunately. There might be a few, but I'm waiting on some people. The fact that they were literally hiding underground all day made it difficult.

In total I was told there were 15-20 max in the underground garage upon our initial arrival. A few antifa went down ahead of the group and confronted them, when this happened the fash all pulled their masks up and hustled into their vehicles, attempting to flee. One was escorted out through the mall fire door by security/police.

"But of course you're going to spin this as a win for your side!" our detractors will claim, "We're sure that the members of Blood & Honour would say something completely different."

And those detractors would be right. Blood & Honour's story would be very different. At least those that they would release for public consumption. 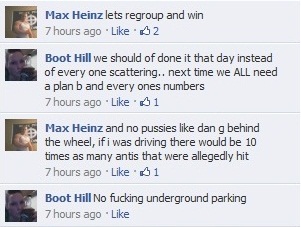 In addition to Hynes, "Wes", and Amanda, we also know that Paul Fromm was present as well as former Northern Alliance member David Ruud.

UPDATE: Because we're bored, and because we know they are just going to screw up again and let us in anyways, here's a gift for our bonehead readers:

You should really be careful who you make friends with Wes.
Posted by Kurt Phillips at 16:26

Yeah, so much for your "anti violent" views, your idiotic Creativity Movement claims it doesn't involve, huh Wes Smith? What a fucking clown. All of them.