You know, we rarely watch the Sun News channel, in part because of the poor production and the amateur hour nature of the programing, but if we're to be honest the biggest reason is how they spin the news. Based on their ratings, it appears we aren't alone in our assessment.

So when Marc Lemire appeared on Ezra Levant's show this past summer, we didn't watch, which in retrospect was very stupid of us. Eventually though, we thought to ourselves, "Hey, wonder if he deals with his long running involvement in the Heritage Front? Surely Ezra would ask about, right? And if Lemire is asked, certainly he would have to tell the truth because Ezra would call him on it if he misrepresents his past? Ezra is a journalist after all and would do the necessary research..... right?"

Well, Lemire was asked about his involvement with the Heritage Front. Here is his reply:

And that, aside from a very brief mention of Wolfgang Droege who Lemire refers to as, "a guy" in a discussion of who the leader of the Heritage Front (Lemire states that Grant Bristow was the hidden boss and that Lemire had met Bristow, "a couple of times"), was that.

Now we can grant some allowance here in that Levant's focus isn't on the Heritage Front, but on the perceived misdeeds of the Canadian Human Rights Commission regarding Sec. 13. And on the second time Lemire was on Levant's programme last week (Lemire seems to downplay his involvement with the Heritage Front even more on this program) he categorically states that he doesn't care if Lemire is a bigot or not, but that Levant considers the issues around Sec. 13 to be of paramount importance that it really doesn't matter what those who oppose it believe.

You know, fair enough on that point, but come on! If you're going to call yourself a journalist, don't you have just a little bit of an obligation to call people out when they are looking you right in the eyes and lying to you? Just on the basis of insulting your intelligence one would think this might cause a journalist to say, "hold up, let's take a look at the evidence."

And goodness, is there evidence!

That being said, we will, in the new year, continue our series on Lemire's involvement in the Heritage Front. We'll pull out some documentation and photographs that we managed to find and which we have yet to publish. In the meantime, we thought we would give our readers a bit of a highlight.

Back in the summer of 1998, Ezra Levant was actually on the cover of the "Heritage Front Report": 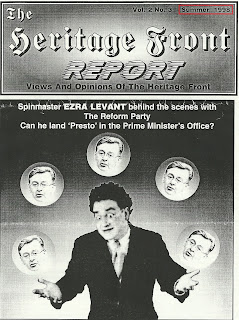 Hmmm, not the most flattering picture of Ezra, but then again we haven't seen many photos of Ezra that have been flattering.

We have to assume that there is just a wee bit of residual bitterness which is directed at the Reform Party given that members of the Heritage Front were booted from the party some years before. And although Ezra is on the cover, we really didn't see his name anywhere in the article, though we guess that portraying a Jewish Canadian as a puppet master behind the scenes was included simply to perpetuate anti-Semitic myths.

If you turn to the back of the 8 page publication, the reader will be directed to the Heritage Front's website at the bottom right-hand corner: 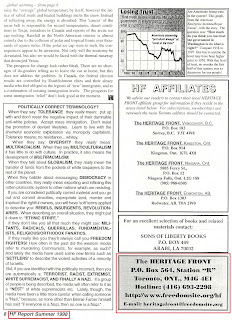 Yep, the Heritage Front website was hosted on Marc Lemire's Freedom-Site. We can't remember Marc's month of birth, but we do know that he would have turn 23 in 1998, the year this was published.

So I uh, listened to some of what they were about, and uh, I went away from it. I mean I was involved with them peripherally in my teenage years.

You can probably add this picture of Lemire distributing a Heritage Front pamphlet in 2002 to your impressive stack of evidence.