Our readers who might swing by the Stormfront forums once in a while will all be able to relate to this story. You find a thread that was obviously edited clumsily by a Stormfront moderator. There are statements which, devoid of context, make no sense. There are quoted sections appearing in other messages that are still there, but the original has disappeared. There are comments telling people to chill out and referring to posters who, again, are no longer present in the discussion as class acts and warriors for the cause. And, without a doubt, you will find at least once poster who has had his posting privileges removed for some unknown infraction.

Sort of like this discussion here which is a disjointed mess.

And, if you're like us, you wish that you had been able to read those posts which have been removed because you just know something juicy was written that might be really embarrassing to some people. You kick yourself thinking, "if only I had gotten there sooner...."

So, should we stop teasing you?

Of COURSE we managed to catch the screen shots! And given what is currently happening in Vancouver with the three Blood & Honour members accused of a series of vicious assaults, we're not sure that Blood & Honour, either faction, needs any more bad publicity.

So here is more bad publicity.

It starts out with two posts made in August 2002 asking if there was a Combat 18 chapter in Ontario:

For 9 years, nothing happens. Then, one of Aryan Terror Brigade leader Josh "Hatchet" Steever's little friends decides to chime in and offer his helpful $0.02, resulting in a fight exposing the divisions between B&H factions as well as their allies and even within their own ranks.

Alright, a quick comment. "Whitewarrior318" is about to claim that, "Blood & Honour has nothing to do with being a thug" though he does say that Combat 18 does what needs to be done. Keep this in mind as you continue reading.

Well, to be fair, that wasn't Blood & Honour/C18 implicated in the murder of a disabled man. It's actually Rob Reitmeier and Tyler Sturrup of W.E.B., the latter being the target of an attempted pipe bombing allegedly by the Kyle McKee (who also spoke up recently in favor of the use of violence) the leader of Blood & Honour/C18 in Calgary. Perhaps that's splitting hair though.

Next it's clear than even the boneheads get confused by the different factions out there.

Oh, we feel this can only get better:

And there you have it. Stark, bold confession that these thugs are not at all about pride. They are violent criminals and they take pride in it.

At this point, much the rest of this is petty bickering:

Ohhh, the grizzled vet of the movement comes in to set things right. Wonder how that is going to go?

Yeah, that last part if telling too. Seems his big concern isn't with the promotion of violence, but in doing it in public.

Well, his soon to be ex-wife certainly thinks he's a punk. As well as the very group that this Steever groupie is advocating for.

But don't let that stop you. Keep on reaching for that rainbow!

Man,  for us anti-racists, you really are the gift that keeps on giving, aren't you "Whitewarrior318"? 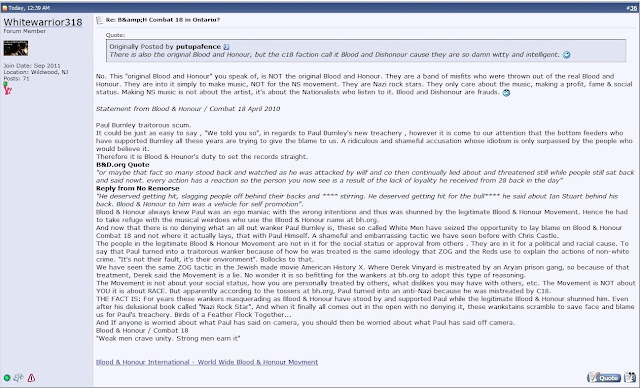 Our next poster will note the hypocrisy of the one B&H faction criticizing B&H/C18 for engaging in violence when members of the former faction (who often had the same criticism of B&H/C18) engaged in the same acts of violence they claim to be against.

And he does this in one of the more offensive ways possible.

Finally, the ubiquitous, "I don't approve of what they did yadda yadda yadda."

So we got up to 40 before one of the Stormfront moderators decided that it was going to be a little difficult to maintain the respectable White Nationalist image they believe they have cultivated for themselves if they allowed most of this thread to remain, however we think that these last two posts would have been #41 and #42 respectively:

There might have been more after this final post, but really, it wouldn't be needed for our purposes.

So, to our msm friend and those new readers who are coming to visit as a result of the alleged violence of the Blood and Honour faction in your fair city, this is what these people believe.
Posted by Nosferatu200 at 21:56

Is this only for the ARC benefit? after all, the lefties and WP are the only people that read this. And it's nothing we all don't know about. Yet, I'll never understand the online persona of any anti, I confronted one of you "brave" souls back in May at some punk show, and he literally cowered, and ran.

Online personas are a funny thing. We've heard what you claim applied also to WP who, when confronted by an anti-racist in real life, cower and run as well.

If it helps though, this particular writer wouldn't run and sure as hell wouldn't cower. You may or may not believe that, but it doesn't matter to us either way.