Tomorrow the protests planned for Ottawa, Calgary, and other Canadian cities should all be under way by noon. Though billed as "million Canadian" marches (thereby attempting to co-opt past progressive events), this writer suspects the numbers will fall far, far, short of one million people. In Ottawa, I suspect there will be between 300 and 500 people, though that is perhaps a generous estimate. In Calgary, perhaps 50 to 100.

Then again, I've never been good at these kinds of estimates, so I may be surprised either way.

In Calgary, WCAI and the Canadian Combat Coalition have been whiny because their event has been referred to by ARC and others as racist and bigoted, a charge WCAI clumsily refutes:

Yeah.... you probably shouldn't do live videos while drunk because this alone undermines everything you just wrote:

Well, the WCAI videos MAY have been directed towards Trudeau (and based on the above video, homosexuals, the mentally challenged, and of course, Muslims), but the rhetoric coming from the participants and the possible guests tells another story.

For example, Karyn Draper, someone ARC has discussed in the past, will be attending the June 3 protest. In one post she says there will be another individual who will be attending but that she would like someone to accompany her to the event.

Let's see if you can spot the name I and others working with ARC noticed? 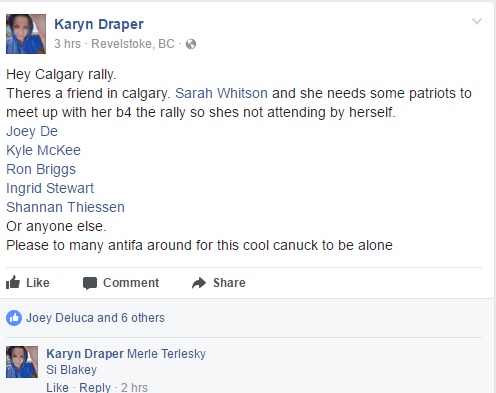 Actually, Merle is a name familiar to many, but let's let that slide for a bit.

It looks like Kyle McKee, founder of the Aryan Guard and current leader of the Calgary chapter of Blood & Honour may be attending the event. Kyle McKee, convicted of such crimes as possession of bomb making materials, possession of prohibited weapons, uttering threats, fleeing police, and assault. Kyle McKee, a man charged with attempted murder and other crimes. Kyle McKee, suspected of being involved in a violent home invasion, vandalism, and the firebombing (directly or having provided orders) of an anti-racist's residence.

Naw! It couldn't be THAT Kyle McKee, could it? 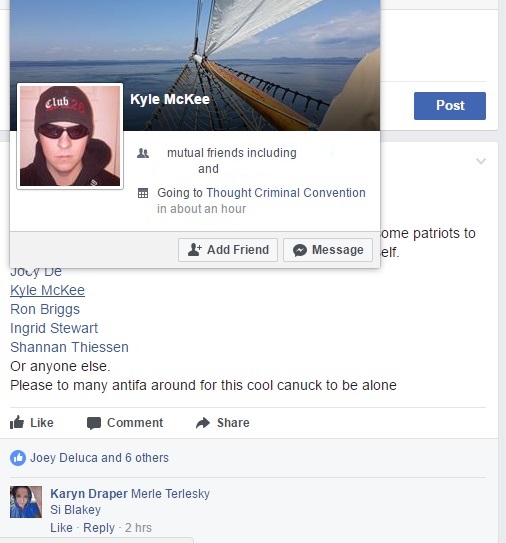 In fact, it looks like McKee is quite familiar with Ms. Draper as well as Joey De Luca, the leader of WCAI and organizer of the event: 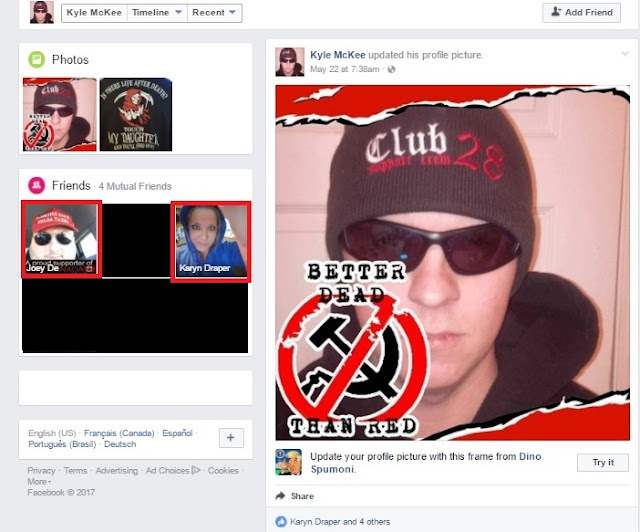 So, if McKee should be in attendance, will he be accompanied by other members of Blood & Honour? 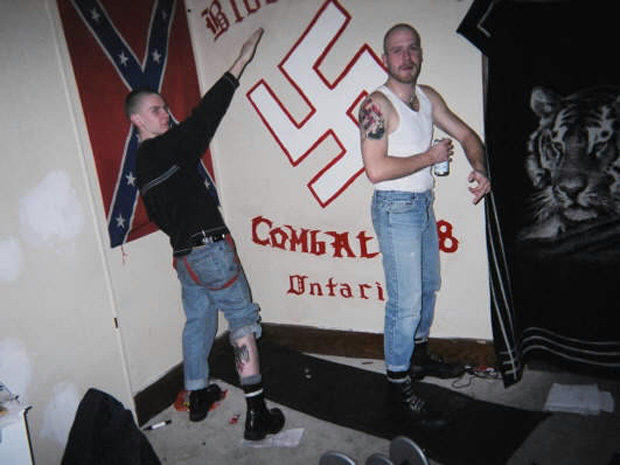 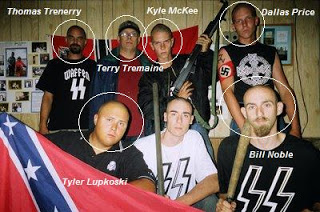 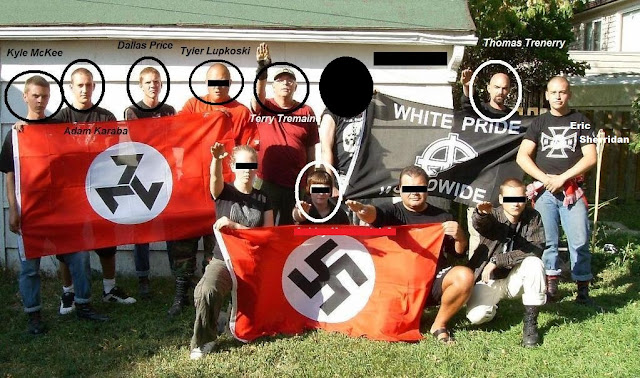 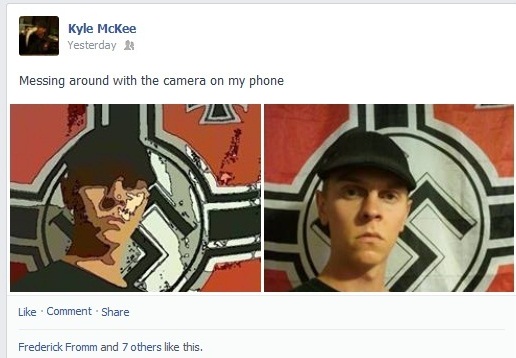 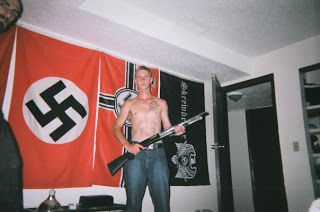 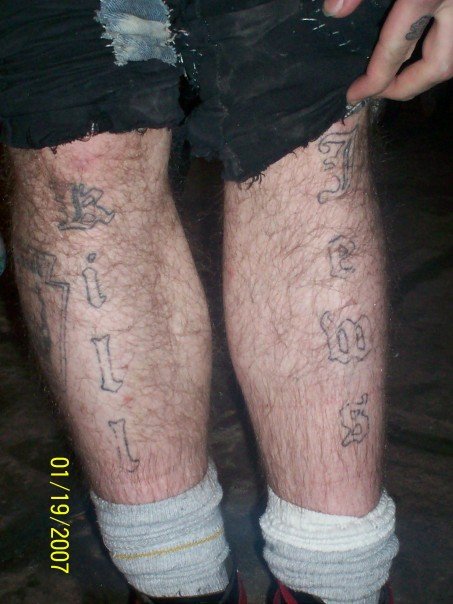 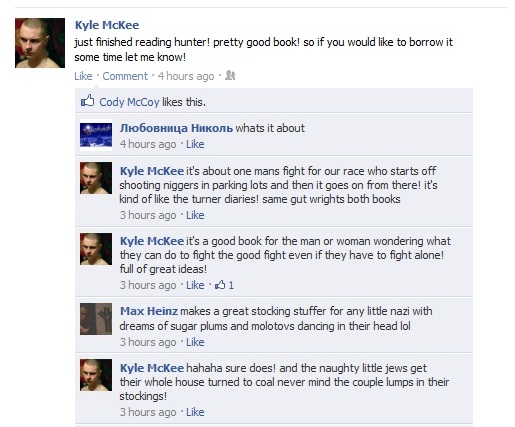 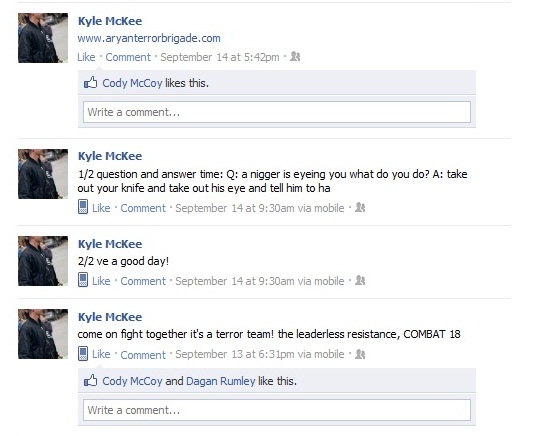 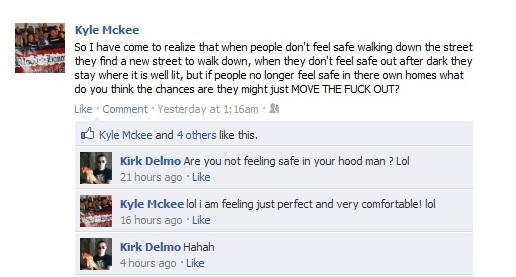 How about the speakers?

Ryan Dean was kind enough to provide an itinerary for the day: 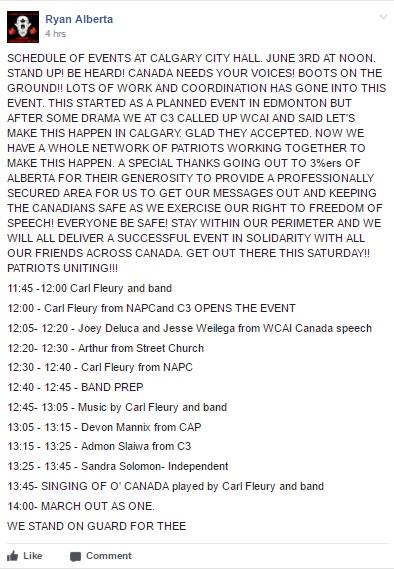 ARC has already provided information about Manitoba WCAI "captain" Jesse Wielenga who's name is butchered on the list of speakers (I mean, even ARC is willing to put in the time to get it right). But Devon Mannix is an interesting fella as well. Mannix, a Kellie Leitch supporter, is mentioned briefly in a "National Post" article published January 28, 2017: 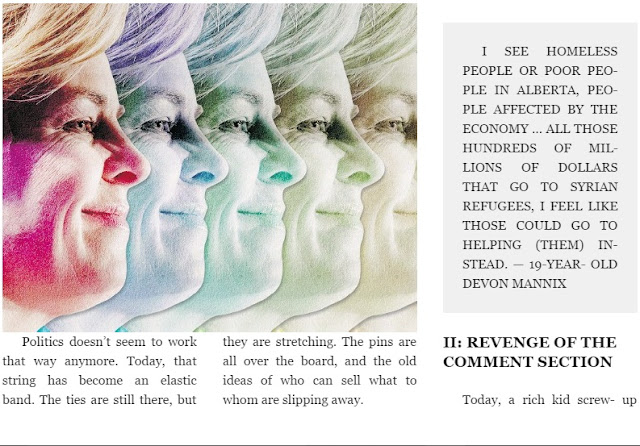 The above quote by Mannix really doesn't accurately detail his views. In fact, the article makes him appears as if he's a relatively mainstream conservative.

He's a bit more than that though:


In the video Mannix expresses a Canadian-style of ethnic nationalism, suggesting "old stock Canadians" are being "ethnically cleansed." And though his target in the video are Muslims and Trudeau by name, he clearly indicates whom "real Canadians" are to him: 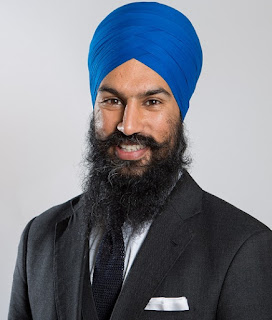 Jagmeet Singh is the current deputy leader of the New Democratic Party of Ontario, a leadership candidate for the federal NDP leadership, and a hell of a snazzy dresser. He was born in 1979 in Scarborough, Ontario. As such, he was born in Canada.

But to Devon Mannix, he's not a "real Canadian": 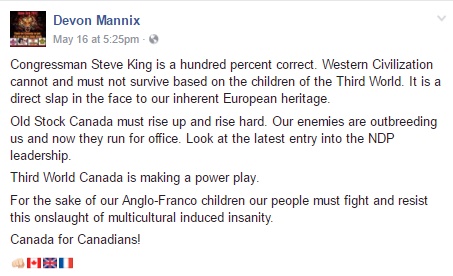 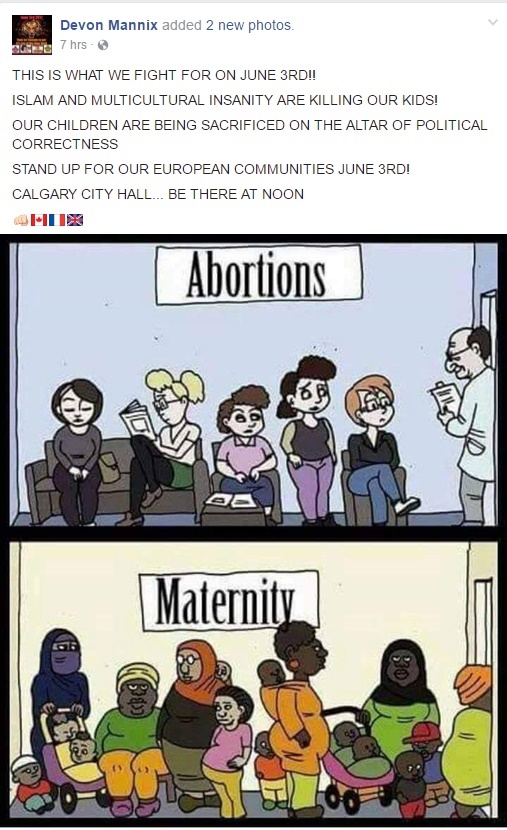 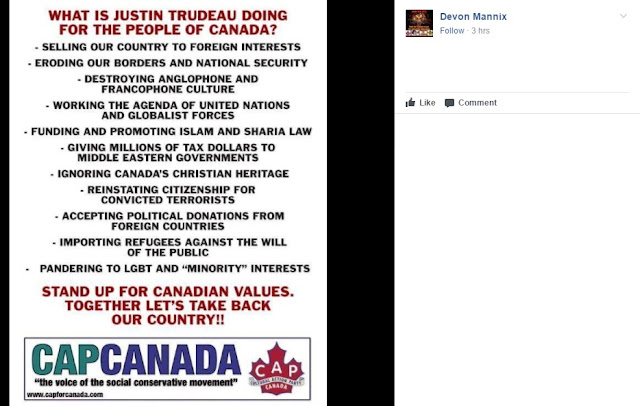 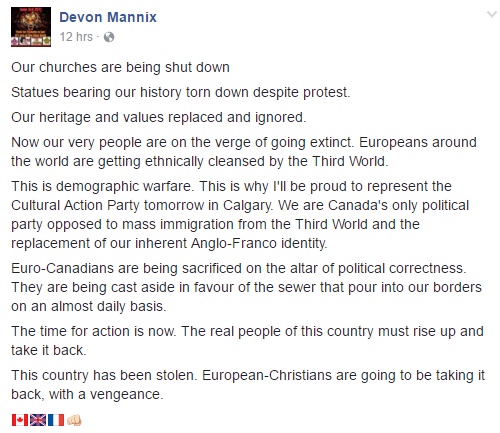 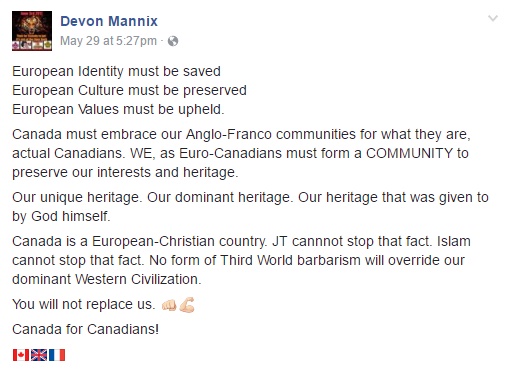 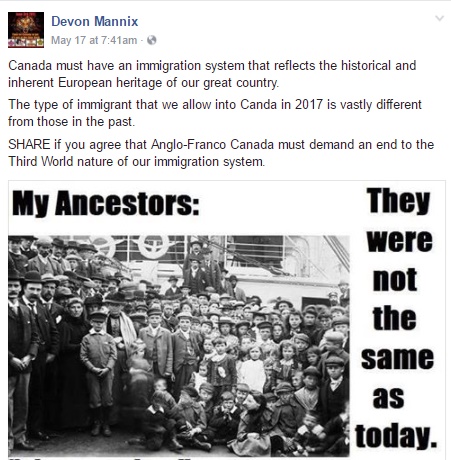 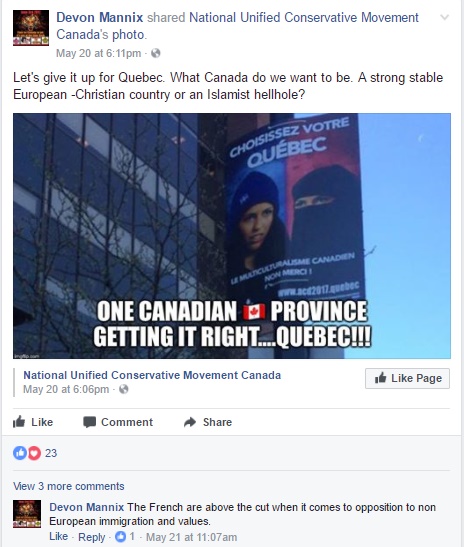 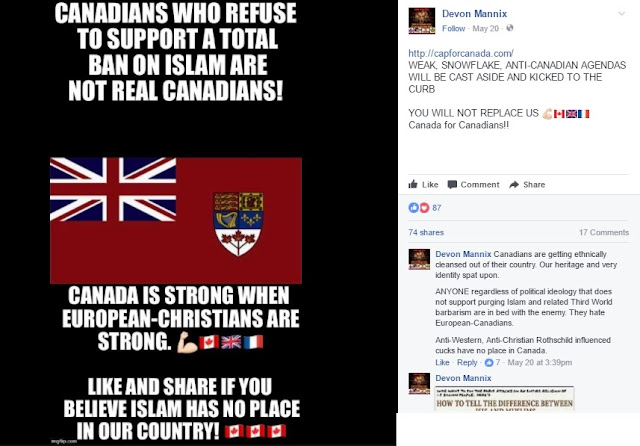 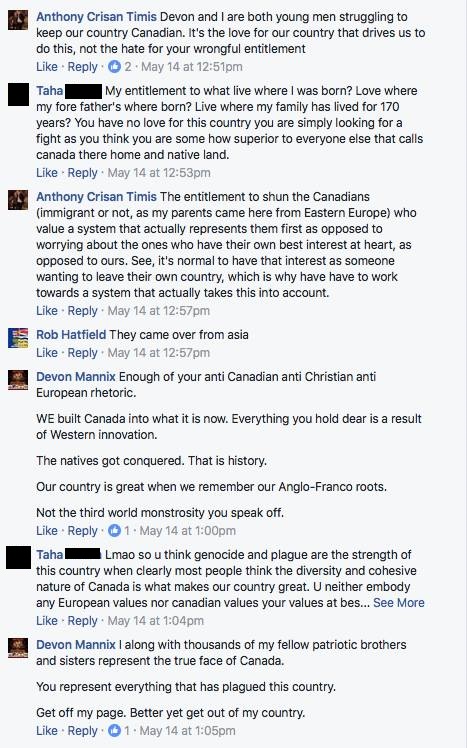 Mannix is not a fan of the new Conservative Party leader because he doesn't think Scheer will do what Mannix believes needs to be done: 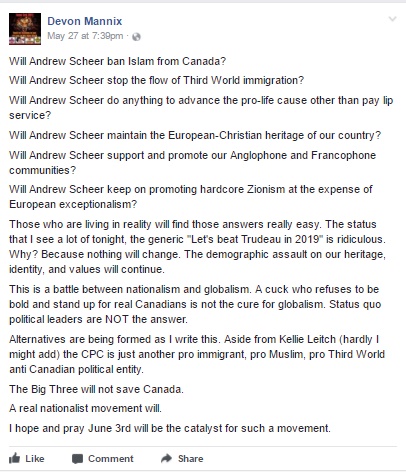 Then again, we do get an indication of the kind of political movement he would be in favor of:

Because I always like to bring thing back full circle if I can, I'll finish with this.

Calgary's Blood & Honour are planning their own event in the evening tomorrow. At the event they will be having a special guest speaker who they've been very quite about so that he's able to fly into Canada unmolested.

It's probably this guy: 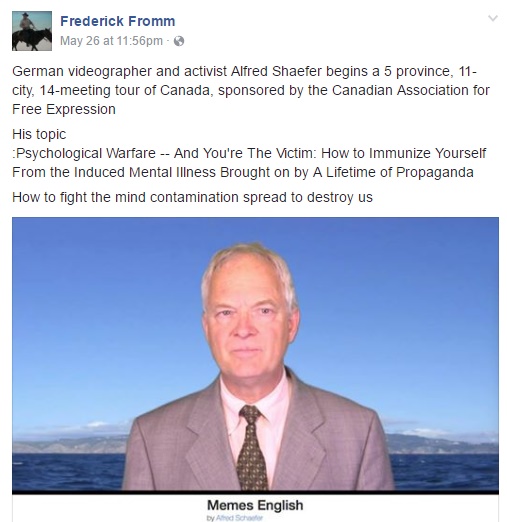 In any case, Paulie who will probably be accompanying Shaefer to Calgary, recently took the time to brag about the Blood & Honour super cool and super secret hidey fort: 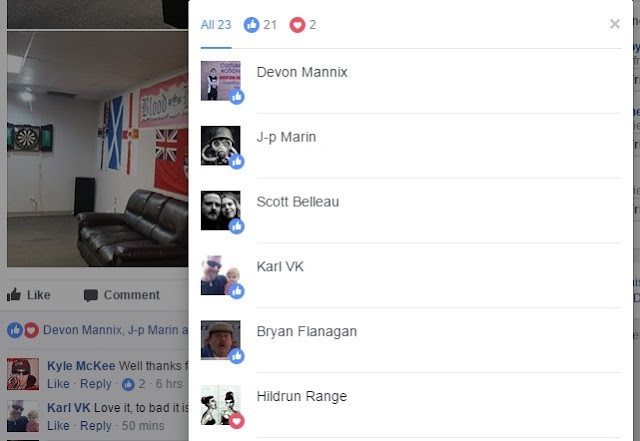 Yeah, you can't actually be shocked. 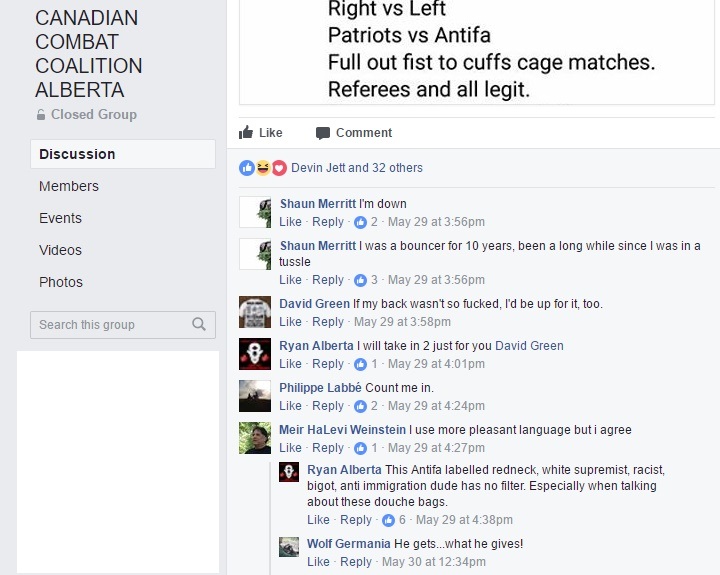 Probably not though
Posted by Nosferatu200 at 23:40