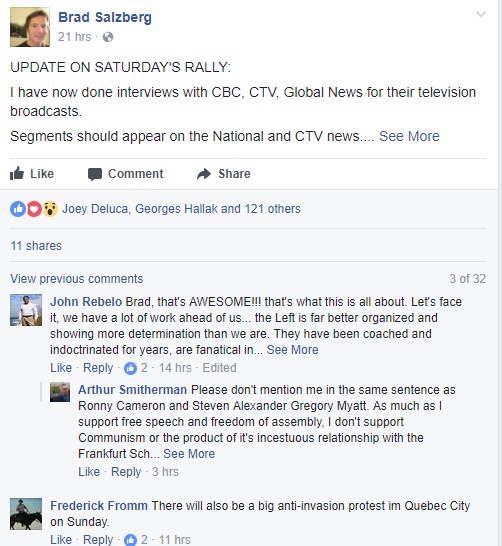 When the members of the Worldwide Coalition Against Islam (based primarily in Alberta) and the Cultural Action Party (based almost exclusively in British Columbia) along with the Soldiers of Odin no-showed their own rally just because at least 4,000 people showed up who would have none of their shit, Joey DeLuca and Brad Salzberg were both very quiet for quite a long time.

And who could blame them? They were rather humiliated. One might even suggest that they were made cuckolds, at least to use the terminology that they themselves have used to describe those whom they view as their enemy.

Others were initially left to try to explain what happened. The usual excuse of "the counter protesters were paid by George Soros" was offered, as well as impugning the good people who showed up. My personal favorite though is the guy who claimed the reports were the result of "fake news" and that the counter protesters were ACTUALLY outnumbered by the "patriots" by 100 to 1:

Yes, the delusions are very strong with these ones.

Eventually though, DeLuca and Salzberg would have to come out and explain what the hell went wrong.

The first to do so was Salzberg himself who tries to put a brave face on the disaster: 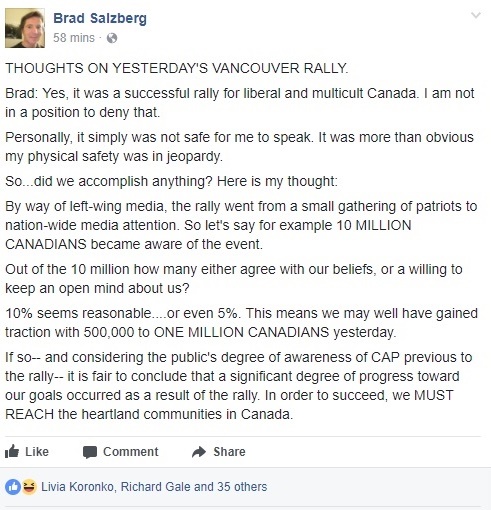 Personal safety? Dude, you were in no danger unless you feel threatened by drum circles.

But the last part. Really? Dude, trying to see a silver lining in your failure is a bit much. What people saw were racist groups that didn't even have the guts to face people who called them on their bull shit.

But don't worry. The most delusional among you will continue to back you while continuing to slide into irrelevance:

Still, when compared to Joey DeLuca's initial response, Brad is a picture of reason and lucidity: 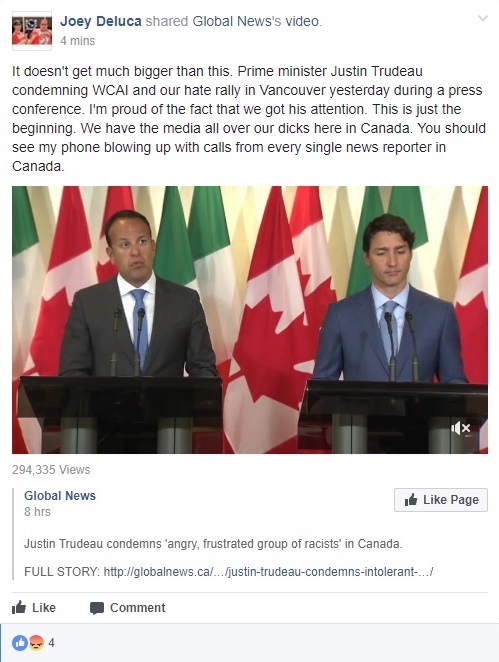 Right. Because his rally (which, again, he was too frightened to show up to) was condemned by the prime minister, DeLuca is proud of himself. He wants attention which is ultimately what things boil down to. Joey is both a loser and a narcissist. Even all the horrible press that he and Jesse Wielenga have been the focus of is, in DeLuca's mind, an affirmation of his significance.

That is bloody sad.

This is also sad: 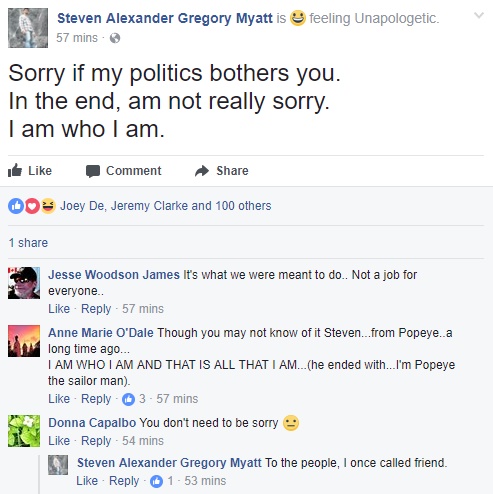 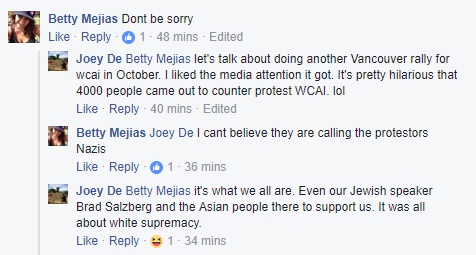 But DeLuca's bravado is exposed as rather hollow when one actually looks at the photos of him in Vancouver on the day of the rally because, yes, he did travel to the city but no, he didn't attend his own event: 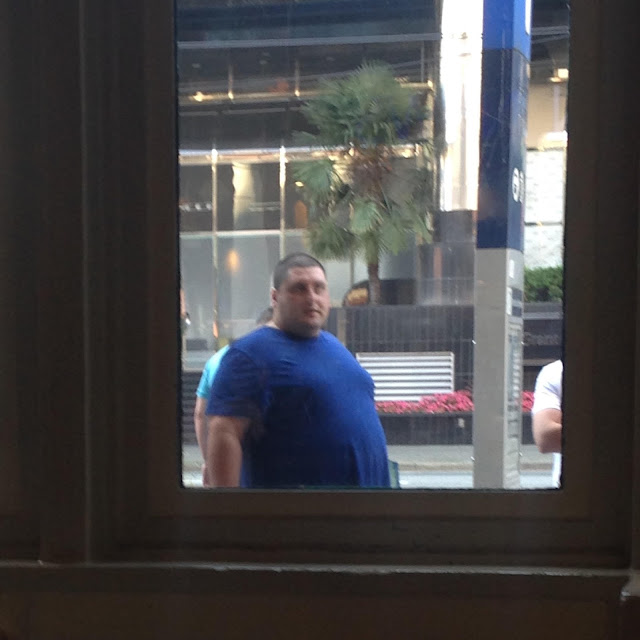 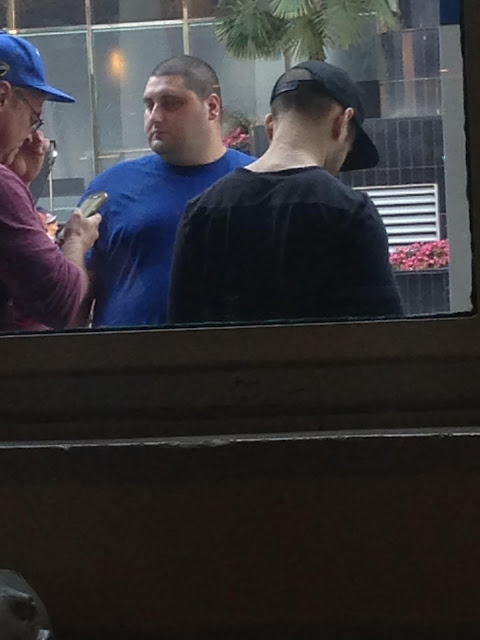 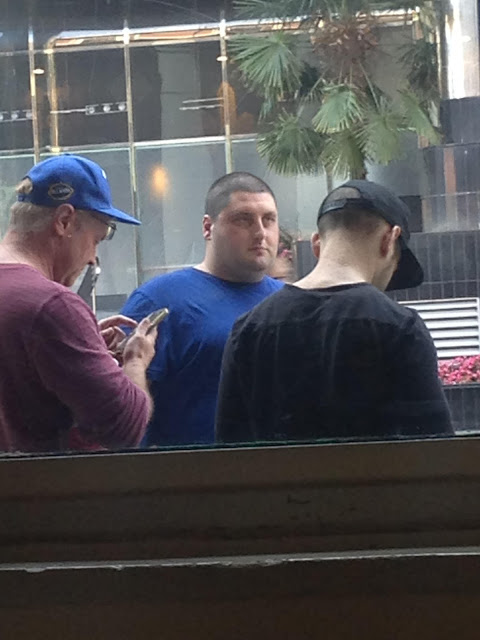 From a person who took the photos:


We watched as Joey Deluca arrived [at the Waterfront Skytrain station]; shook hands with his buddies waiting outside. They chatted outside for a few minutes, then we decided to take a closer look and go out for a smoke. Our friends joined us outside and we pointed them out - my friend took a picture of them and one of them waived. He shouted that we could take all the pictures we wanted, then they promptly left. We figured we'd see them at the rally, but they never showed up.

In another exchange in a completely different thread on Facebook, Joey does come closer to the truth, but throws Brad Salzberg as well as the Soldiers of Odin under the bus. You see it was their failure to show up that resulted in the failure of the rally, nothing Joey himself did:

Well, I can't say anything about the SoO not showing up, but Brad Salzberg was also at the station I'm not sure about DeLuca's claim that CAP cancelled before he arrived: 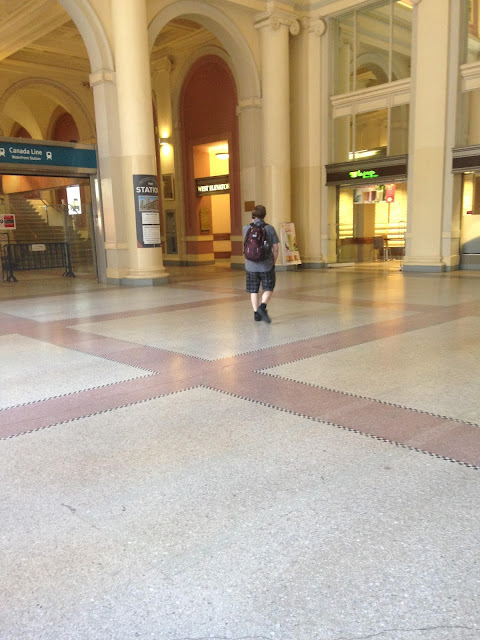 The photographers who snapped Joey's photo also managed to get Salzberg:


We watched a small man frantically pacing around the lobby on the phone - we figured he was Brad Salzburg. He looked stressed out and upset. I only got a picture from the back, but my partner looked at his photo later and confirmed it was Brad.

It really is incredible how quick DeLuca is to blame others before he himself takes any responsibility for his part in the failure in Vancouver. And as a result of of showing up along with the CAP and SoO, these idiots who did were also thrown under the bus because they were alone.... 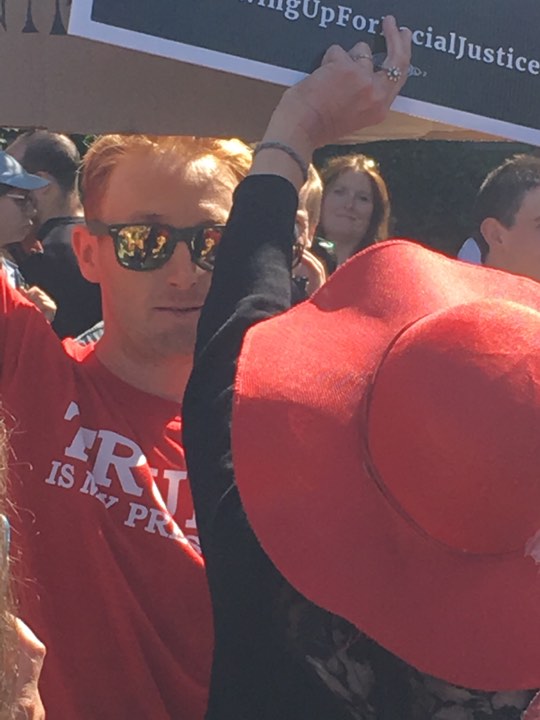 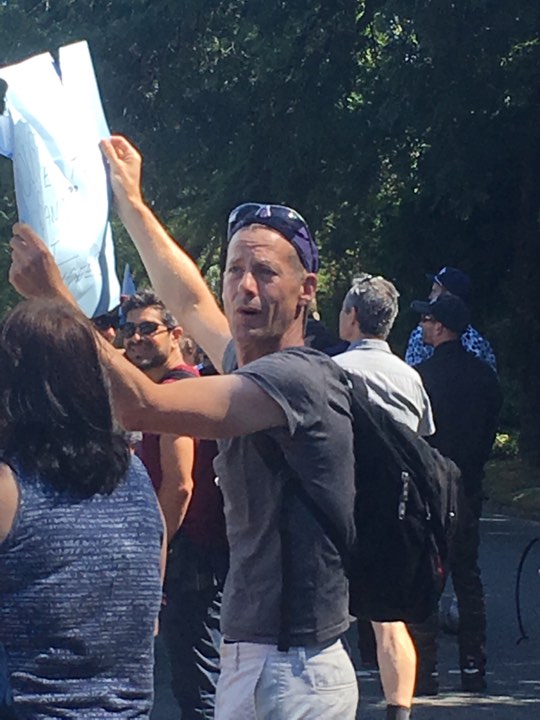 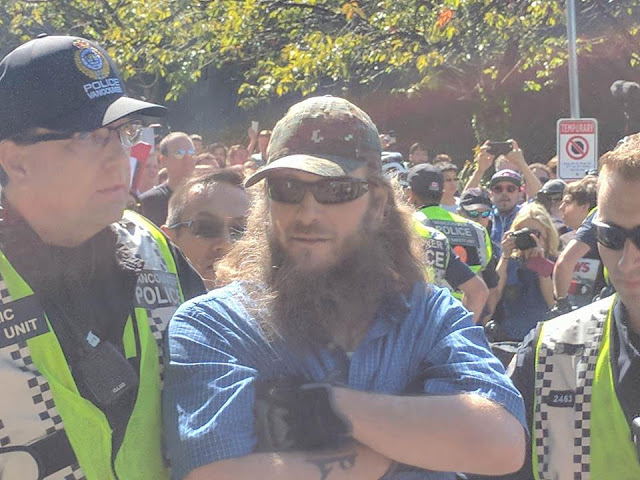 .... they they themselves are hardly sympathetic figures.

By the way, does this guy look like Jesse Wielenga? There has been some discussion about it:

I mean, that's some impressive, Olympic-caliber, hair growing he's got going there if it is since the following video was published only a day or so before the Vancouver event:

So, what is next in for Joey DeLuca and the WCAI? 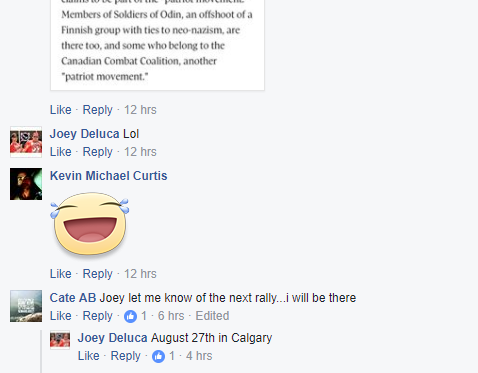 I hope the good folks in Calgary make Joey feel as welcome as the good people of Vancouver did on Saturday/
Posted by Nosferatu200 at 00:54

the guy in blue being led away by cops is a soldier of odin from sooke bc....would love to know his name as well.