In July I posts a story concerning five active members of the military who disrupted a ceremony in Halifax being conducted by members of the Mi'kmaw nation and their supporters. The men were also supporters of the Proud Boys, a chauvinistic and nationalistic hate group founded by Gavin McInnes soon to be formerly of "The Rebel" and who has his own history of bigotry to contend with.

I was surprised by the reaction to the story; as of this day the article has been viewed 167,810 times and resulted in national and even international coverage. The top military brass were even forced to acknowledge the situation promising an investigation and repercussions for behavior embarrassing the CAF. I was even hopeful that something might actually happen.

Well.... that hope appears to have been misplaced:

Four of the five Canadian Forces personnel who said they were members of the group the Proud Boys and disrupted a Mi'kmaw ceremony in Halifax on July 1 have resumed their regular duties with the military but remain on probation.

Oh, probation. I guess that's something. Not much of something, mind you.

Newton said the four remaining servicemen, who are now being monitored, must pass a probation period in order to continue with the military.

He wouldn't spell out the exact disciplinary measures the members have faced but said they were removed from their workplaces and weren't allowed to handle classified material.

Newton said the members are experiencing professional setbacks and personal consequences in their units and the community.

None of the men received demotions or were moved as a result of their behaviour. Newton said being on probation limits what they can accomplish professionally.

A friend suggested that the reasons for keeping the four who are still enlisted might have something to do with the current enrollment:

Yeah the gossip train is saying they are being treated like shit by their peers though
— Acadian Driftwood (@RDHalifax) August 31, 2017

The brass is involved in this shit treating, apparently lol. Problem is they are short staffed. This is what I heard anyway.
— Acadian Driftwood (@RDHalifax) August 31, 2017

Gossip: if they were not so short staffed, these guys would be fired... It may happen after they get the next batch of recruits. Who knows?
— Acadian Driftwood (@RDHalifax) August 31, 2017

The following section from the CBC article lends some credence to the rumor:

Newton said he interviewed the men personally and "saw their acknowledgement, their desire, their intent to adhere to the conditions."

He also said the four are expected to learn from their "monumentally poor judgment."

"I don't have a huge surplus of people in the Canadian Armed Forces who we've already spent million of dollars training, who in their mistake and in this learning ... will work to restore the trust between them and the chain of command. They will be a good investment in the long term."

The article also mentions that one of the five is no longer in the military. In the Proud Boy Canada celebratory post on Facebook, that member briefly addresses the reason for his departure:

And on cue, a lot of the other alt-right supporters of the Proud Boys have chimed in with their approval: 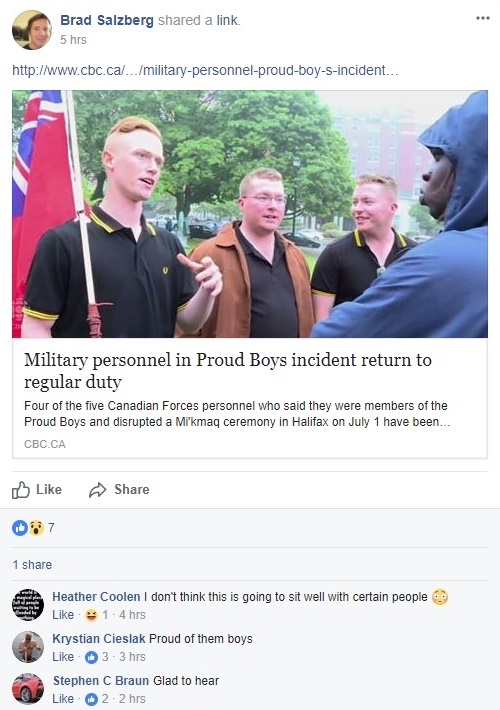 So surprised? Not particularly.

But that said, no SJW tears fro me. 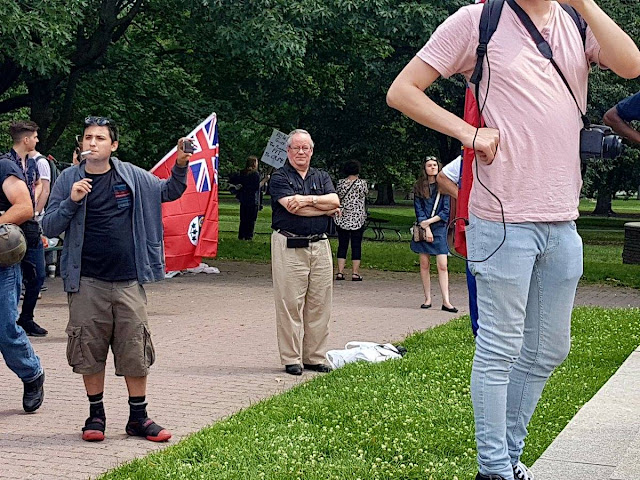 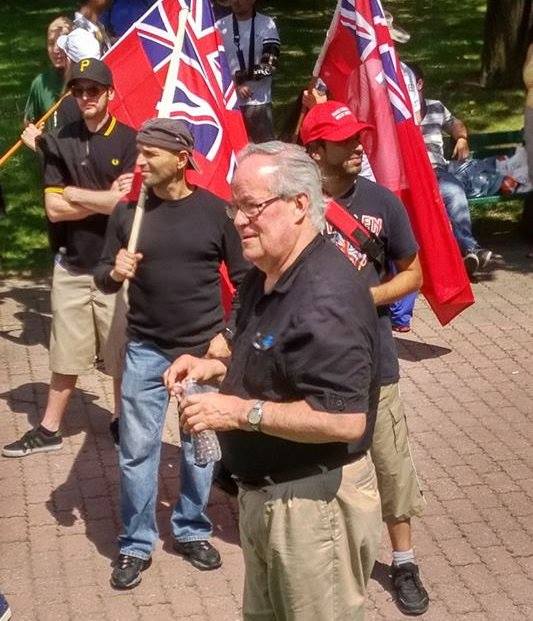 Hmmm, however did those photos end up here?
Posted by Nosferatu200 at 18:48

It was alaso Adm.Newton's last day,

So, he kicked the can down the road, the Mil. Police will be crawling all over these guys lives, because they are a "security risk", foreign and domestic,

And these guys will never have the Navy careers, and post Navy careers. If, and that's a big if, they behave themselves, they will get to do their 20, end as Junior NCO's, and have a post Navy iob as deckhands or dockworkers.

If they don't behave themselves, it's Brig time followed by dishorourable discharge.