A Very, Very, Bad Week For Ezra Levant and "The Rebel"

That may very well be a huge understatement:
And most recently, even though Faith Goldy firmly stated that she would "stand with Ezra"....

.... it looks like Ezra wasn't as willing to stand with Faith: 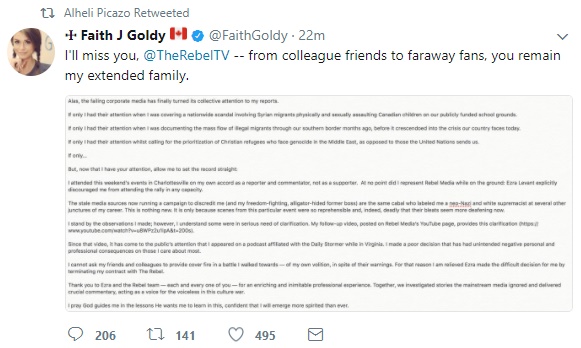 Yeah, she actually thought appearing as a guest on a "Daily Stormer" podcast was a good idea given the current shit storm.

However, perhaps the most damaging story ultimately might be these ones:

Yeah.... though nothing has been proven thus far, this if true is a huge deal?

Now, the criticism coming from these sources as well as my own criticisms of "The Rebel" really don't mean much the the tens of thousands of Levant's and "The Rebel's" loyal viewers and supporters. We are #fakenews, lieberals, and probably all on George Soros' payroll because that's the mantra of many of those loyal followers. So the question that should be asked is how are they responding to these stories, especially the claims made by the former correspondent?

Well, thus far it seems that they are split down the middle.

Let's take Ronny Cameron and his Facebook readers as representative of a subset of "Rebel" supporters reacting to all this bad news. As of only a few days ago, Ronny was eager to send in his resume to become a member of "The Rebel" family:

There are more comments urging Cameron to apply as he would be "a perfect fit." 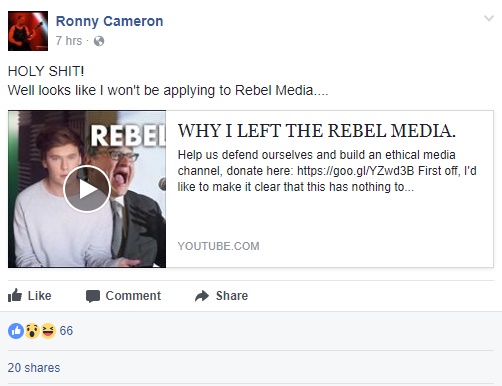 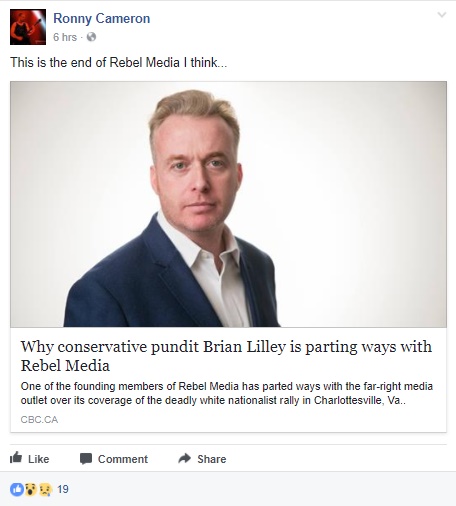 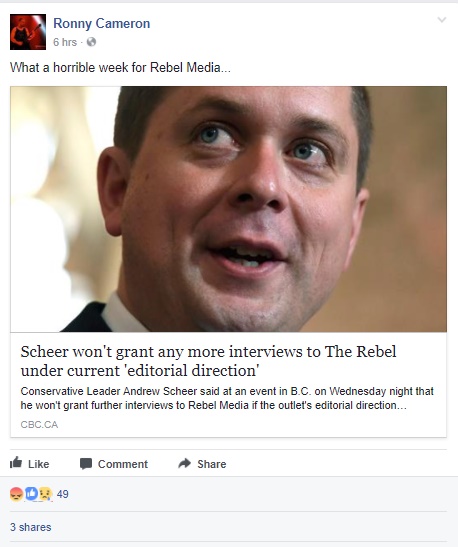 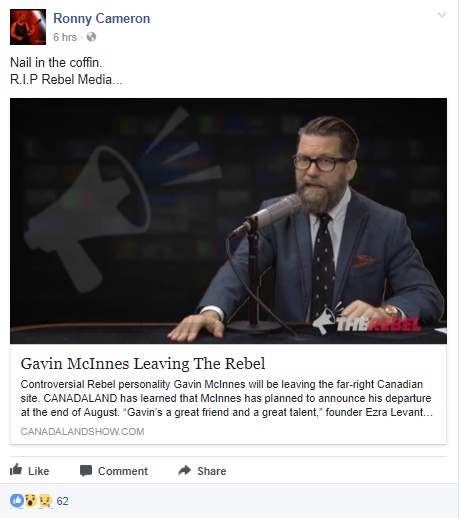 Cameron posted two live videos that ARC has combined in which he talks about the allegations made by the former correspondent as well as the firing of Faith Goldy.

The video is quite long so feel free to hop around:

The responses to the two videos mirror what I've seen elsewhere from supporters of, "The Rebel": confusion, anger, disbelief, lashing out at the Liberal Party/msm/George Soros/Andrew Scheer, and a smattering of antisemitic comments. The following screen shots are representative of the attitudes found on Cameron's page as well as elsewhere: 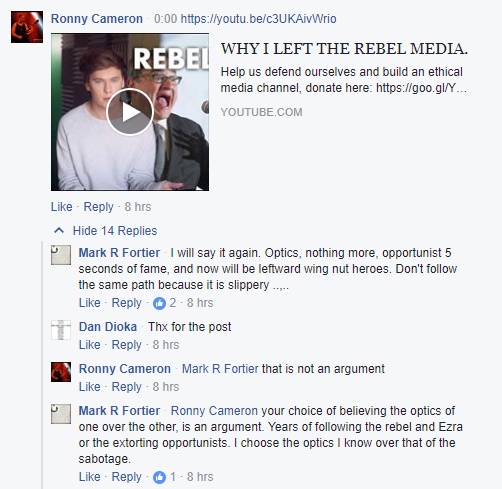 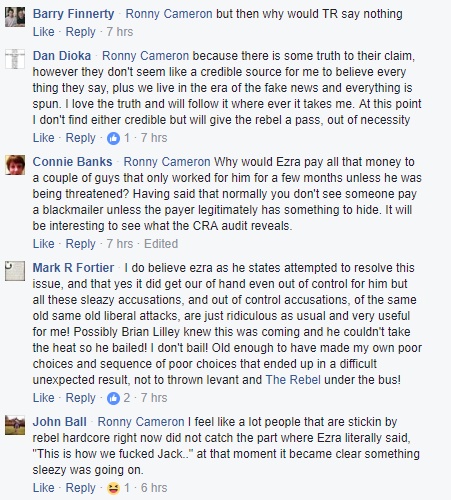 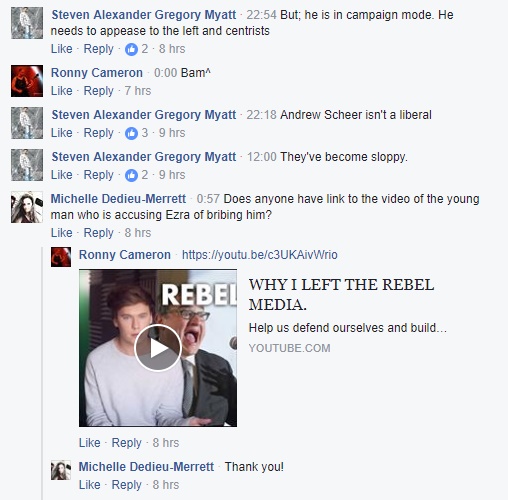 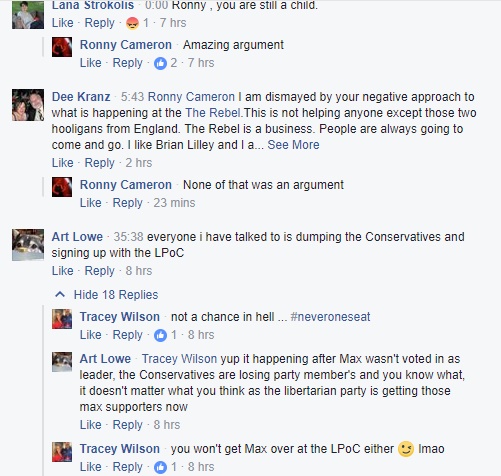 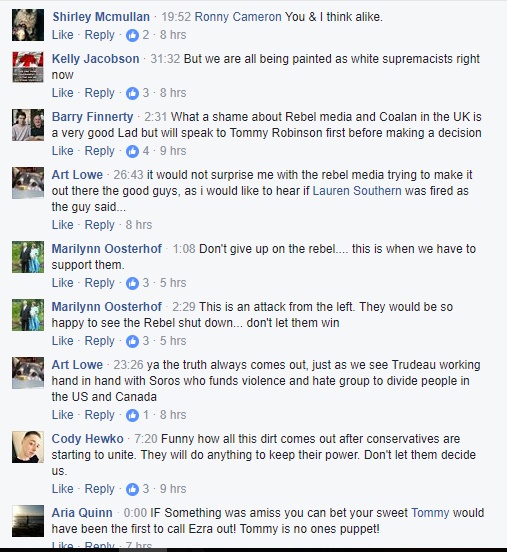 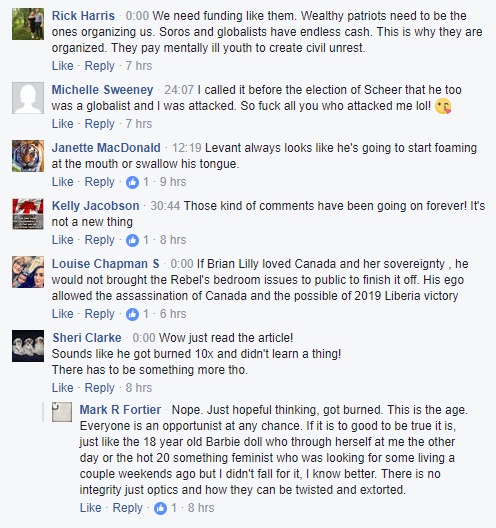 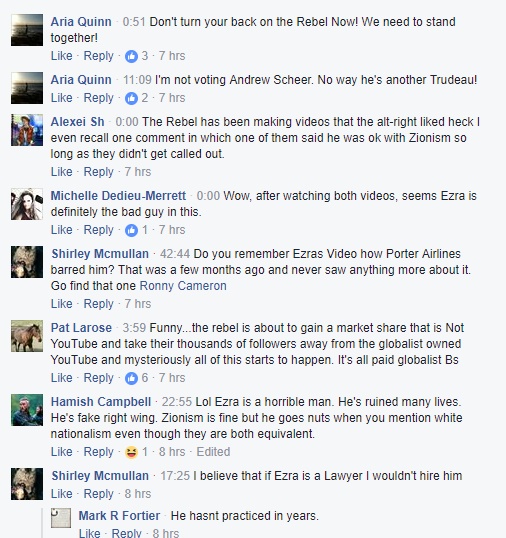 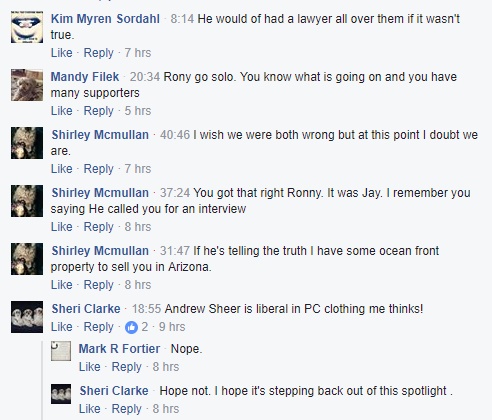 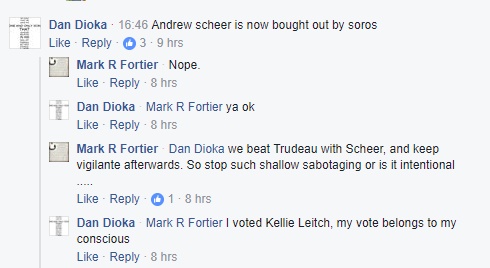 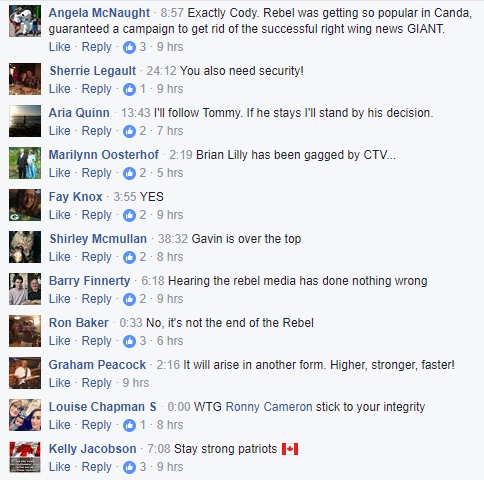 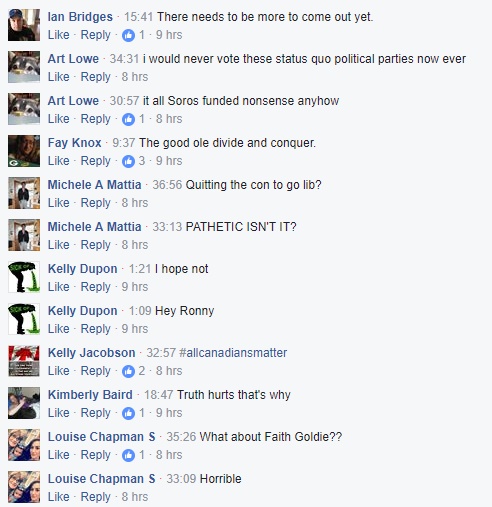 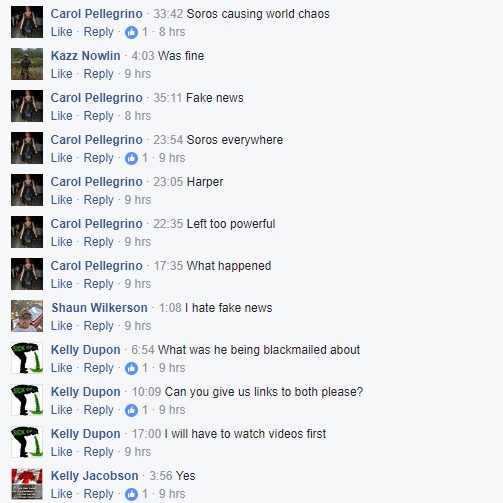 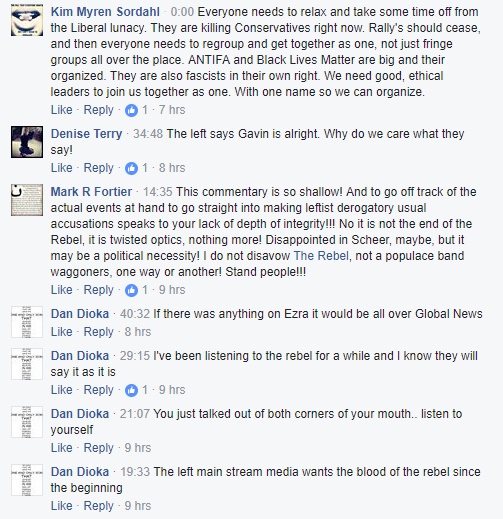 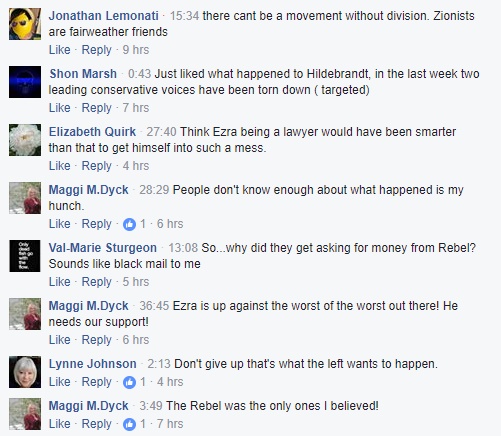 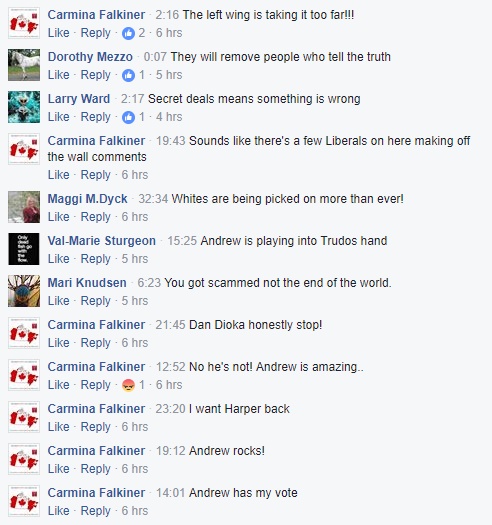 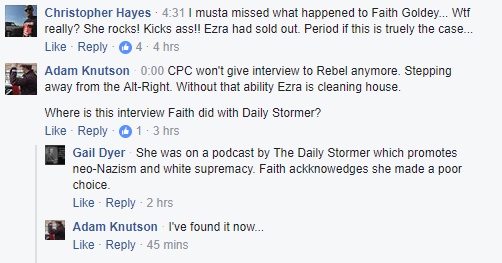 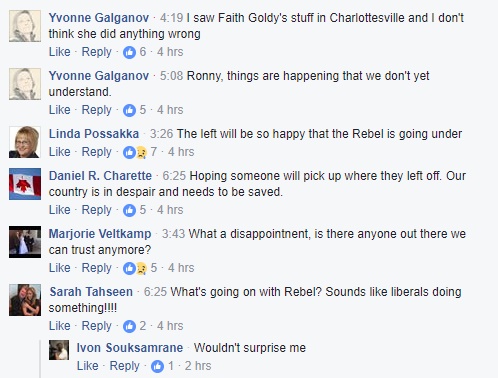 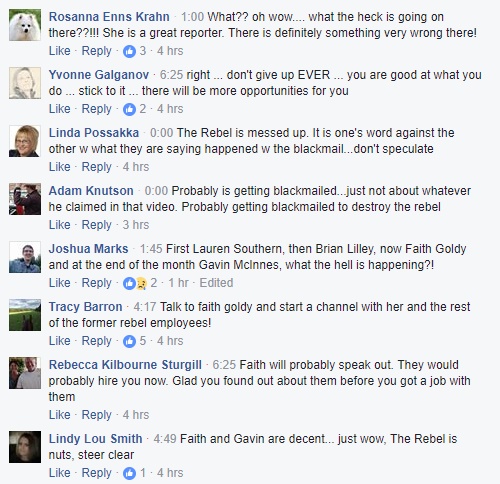 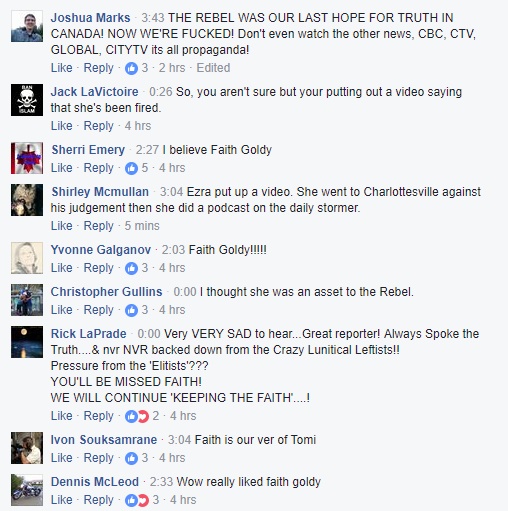 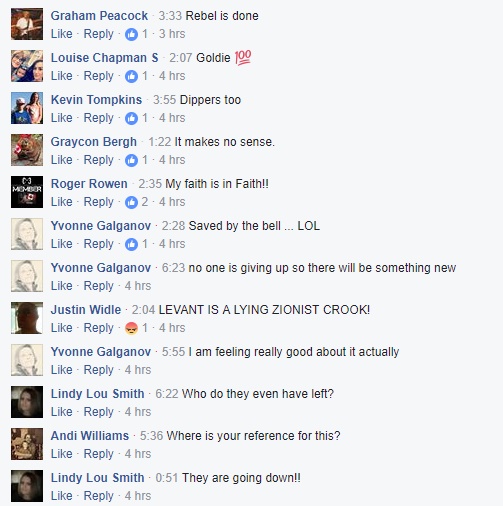 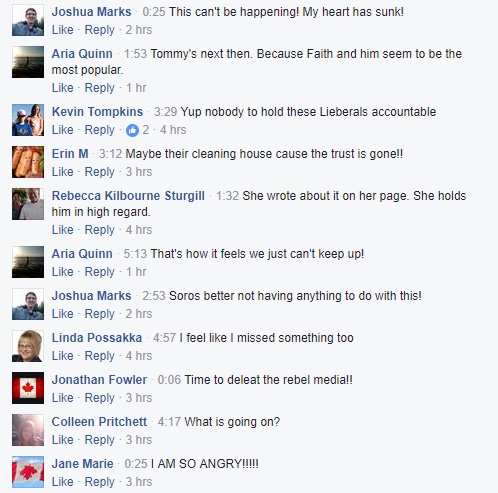 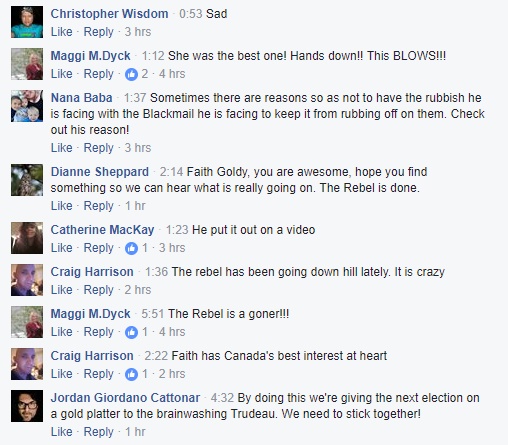 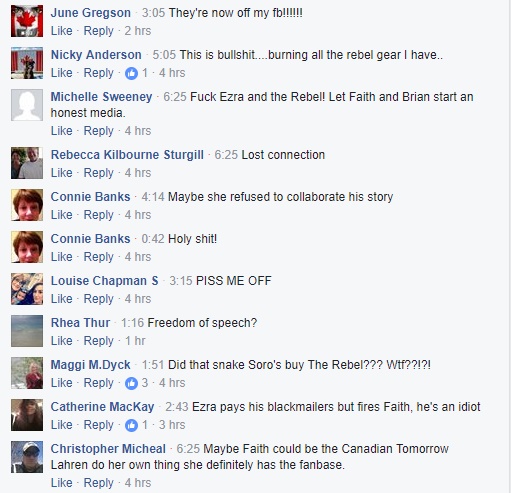 Suffice it to say, the fringe right devotees of "The Rebel's" brand of conspiratorial, Islamophobic, race-baiting, Trump worshiping, "journalism" have been thrown into some turmoil. And as Levant's baby has bit hit with body blow after body blow since Saturday, everyone is waiting to see what the next shoe to drop will be.

ARC will certainly be staying tuned.