In one of the opening scenes of the Charlottesville Vice documentary, one individual stated that he had driven 12 hours from Canada to attend the event: 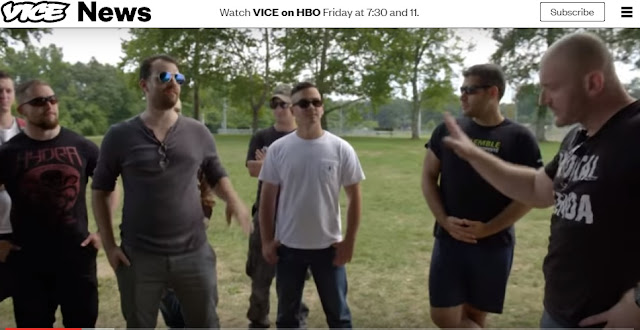 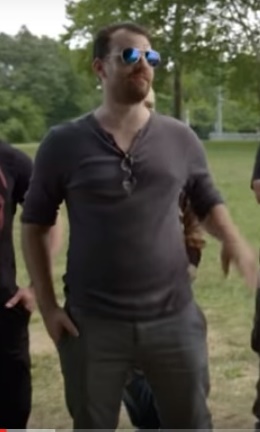 Well activists were able to track down information about him and one other Canadian participating in the hate rally. At least one of the men is was a member of the Quebec hate group La Meute:

“Twelve hours from our car -- we've been driving from north of the border,” one of the men says in the VICE News documentary, speaking in accented English. “In Canada, hurting people's feelings is basically illegal.”

According to the anti-racist group, one of those men is a known member of La Meute, a far-right Quebec-based anti-Islam group.

In an interview with CTV Montreal, however, La Meute spokesperson Sylvain Brouillette said the outed individual claims that he is not a white supremacist but nevertheless voluntarily withdrew his membership Tuesday night so as not to implicate La Meute with his personal actions.

La Meute, which has hosted demonstrations against radical Islam and illegal immigration, mostly operates as a private Facebook group -- a necessity, Brouillette said, as members fear losing their jobs if they were to be outed. The group, he said, will still go ahead with a planned demonstration in Quebec City on Sunday.

At least three members of Quebec's far right were in Charlottesville. One was a member of the anti-Muslim La Meute. https://t.co/d0dJCVU9rw
— rob (@_robwward) August 17, 2017

La Meute was at the time planning for their own march/rally in Quebec city to be held today. Reports are that La Meute are wildly outnumbered by anti-fascists and were, at least as of the writing of this article, holed up in a parking garage. Nora Loreto‏ is currently reporting on what is going on:

Two more loud bangs, sound like fireworks but louder, though its a concrete jungle so that amplifies it #MANIFENCOURS
— Nora Loreto (@NoLore) August 20, 2017

One more sound blast or explosion, though things are starting yo disperse. Rumours are that La Meute has left. No idea if true #manifencours
— Nora Loreto (@NoLore) August 20, 2017

The rally we had today was the largest since the vigil the night after the mosque shooting. Coverage needs to reflect that.
— Nora Loreto (@NoLore) August 20, 2017

If there is a narrative that emerges that focuses on skirmishes or whatever, that serves who exactly? Peaceful is boring and smashing, news?
— Nora Loreto (@NoLore) August 20, 2017

Balanced coverage is proportional coverage. Give us at least a sense of the experience of most people today. No hate in Quebec City.
— Nora Loreto (@NoLore) August 20, 2017

Today, after service at the Anglican cathedral, they gathered people from other churches and marched at Place d'Youville.
— Nora Loreto (@NoLore) August 20, 2017

Smaller rally now on R-L and still folks are at the exit of Complexes G #MANIFENCOURS
— Nora Loreto (@NoLore) August 20, 2017

Word is that La Meute never did get out of the parking lot and latecomers got separated from the main group. So: big victory.
— Nora Loreto (@NoLore) August 20, 2017

But I'm leaving and as things get smaller, there's of course a bigger threat of things going down so,kl keep watching.
— Nora Loreto (@NoLore) August 20, 2017

The fireworks/smoke bombs were likely a response to march being declared illegal. They know the cops are shutting them down for the Nazis.
— David Moore (@Decaset) August 20, 2017

Can confirm that this man sporting a Nazi tatoo was scrummed by the media. Said he was only passing by not La Meute. #MANIFENCOURS pic.twitter.com/2gTnvE9GFZ
— Tristan D'Amours (@NewsWithTristan) August 20, 2017

So, yeah, doesn't appear to be going so well for Le Meute.

After several hours penned inside, La Meute appears to be on the move
— Jonathan Montpetit (@jonmontpetit) August 20, 2017

And they had to pee apparently:

Rather long line at bathroom as La Meute begin to emerge from parking garage, where the had been pinned for several hours
— Jonathan Montpetit (@jonmontpetit) August 20, 2017

No protesting yet for La Meute. They have let women and children (and journalist) upstairs for fresh air, bathroom water.
— Jonathan Montpetit (@jonmontpetit) August 20, 2017

in Quebec City, anti-fascists have 500 La Meute fascists trapped in a parking garage with no water and no access to toilets 🏴💝🏴
— Lylia Wisteria (@LyliaAnarky) August 20, 2017

They gathered at 1pm. Spent the next 4 hrs in a parking garage. Now La Meute seems like they will finally get the chance to protest pic.twitter.com/7AEXIzr80D
— Jonathan Montpetit (@jonmontpetit) August 20, 2017