Another day, another futile and rather impotent rally.

The North American Freedom Fighter (formerly the Canadian Combat Coalition, but I'll get to that soon enough) is planning a rally for August 27 because they really don't have anything better to do with their time apparently: 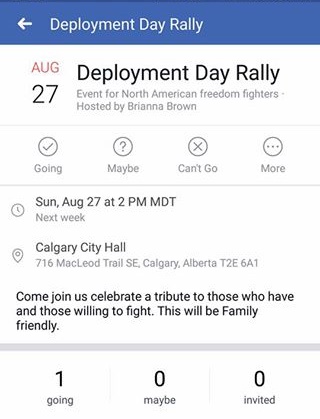 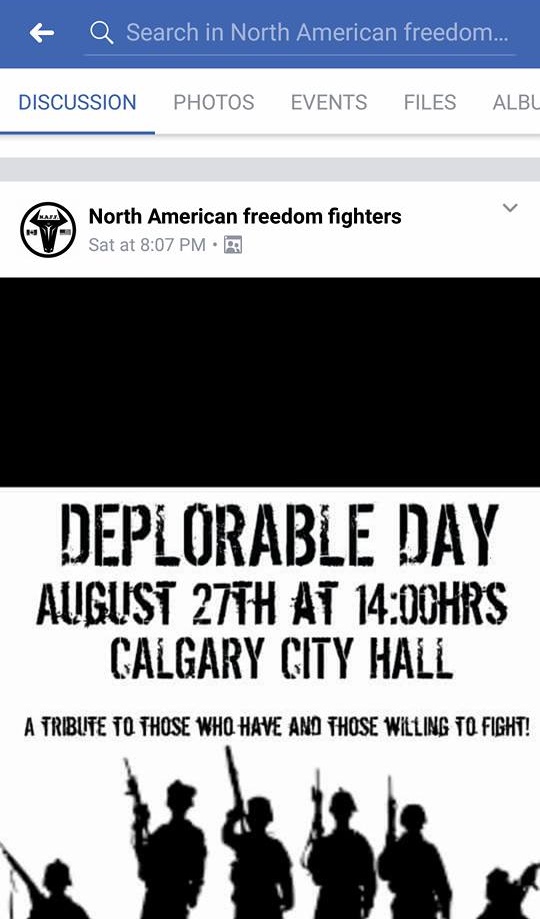 Joey DeLuca, who has otherwise been fairly quiet since his failed efforts in Vancouver, has also started to promote the event: 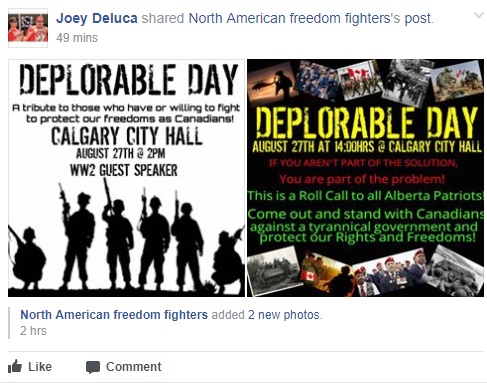 
Not content with embarrassing themselves again, Ryan Dean and his "vice-president" David Troute have decided that they would also target those who might show up in opposition.... 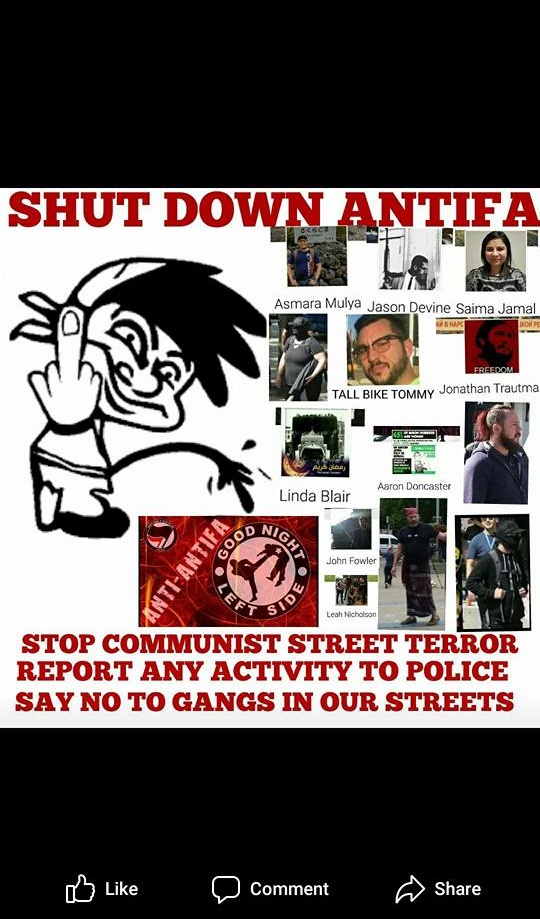 .... as well as defaming a community journalist who has covered their events in the past and who allowed them to prove themselves to be the bigoted idiots we all knew them to be already: 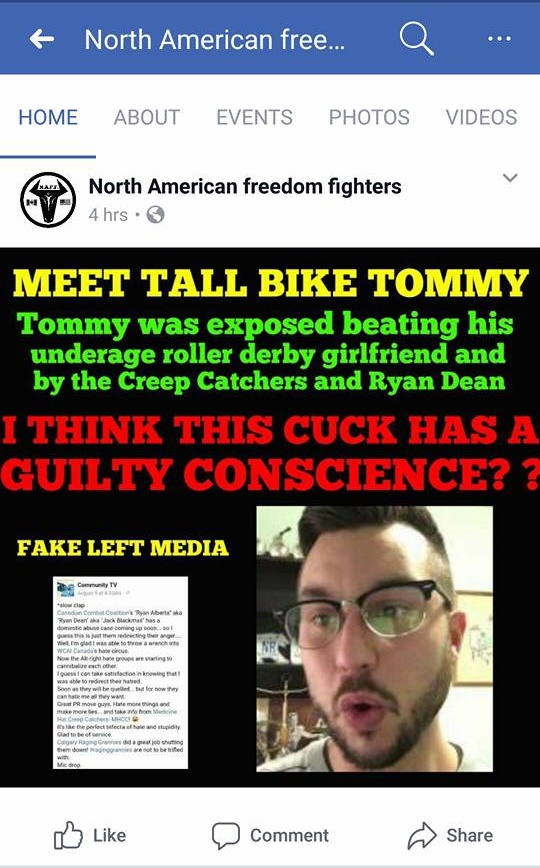 However they aren't content with defaming Tom. No, now someone associated with the group -- and there is a strong consensus concerning who that is based on the voice -- has decided to call Tom to vaguely threaten him:

To top it off, the III% Alberta militia has stated that they plan on providing "security" at the rally: 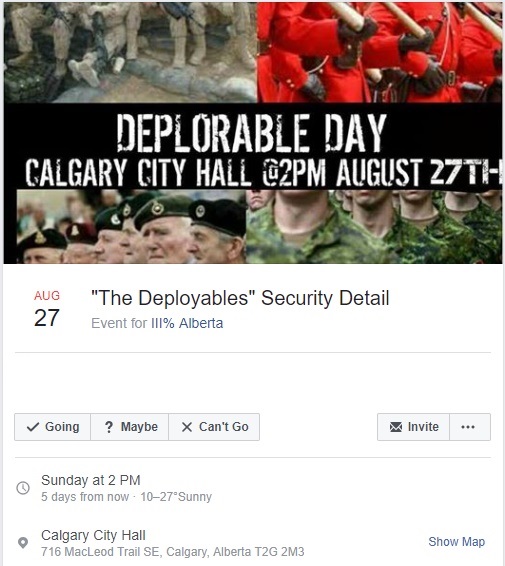 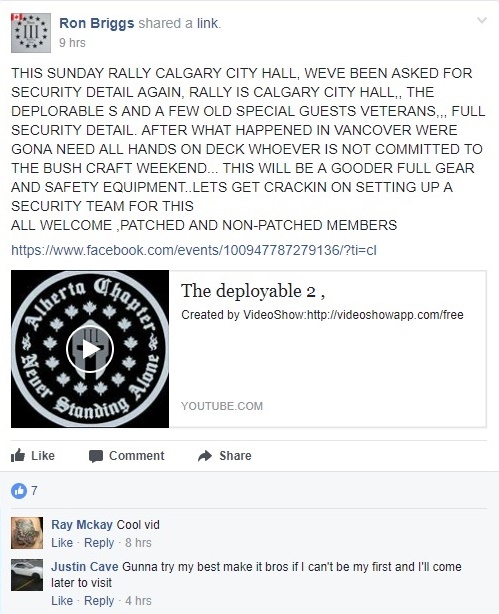 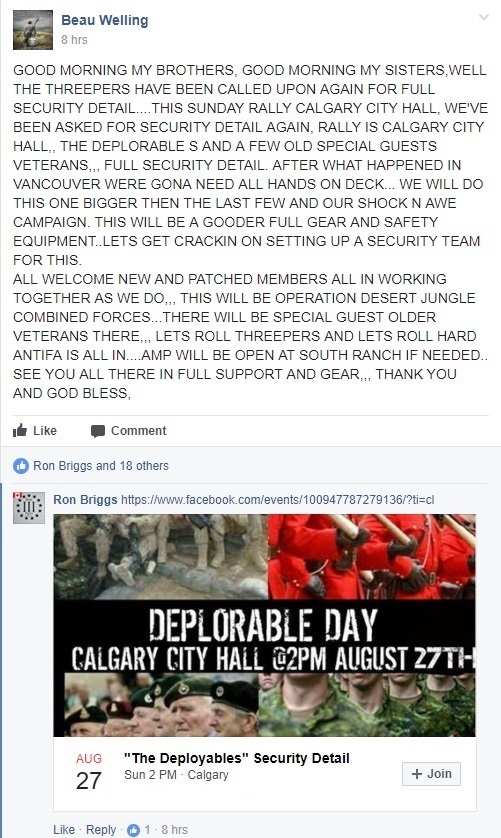 But in spite of the bravado, there are some big problems that the two hate groups are currently facing.

First, as noted, Ryan Dean is no longer the head of the Canadian Combat Coalition and is not leading anther ridiculously named entity, the North American Freedom Fighters. Dean will claim that he purposely jettisoned the CCC name and that it was all part of a larger strategy. The truth however is that he was kicked out.

And if it isn't clear, "Harry Kuntz" is Ryan Dean because he's a classy mofo: 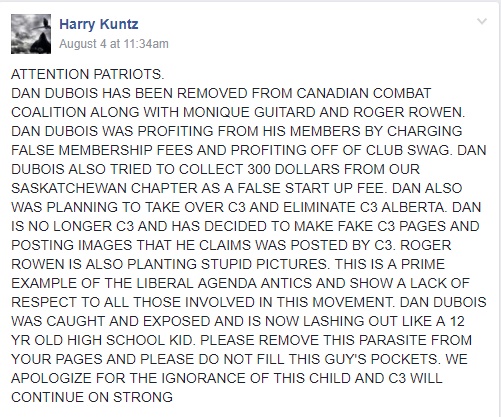 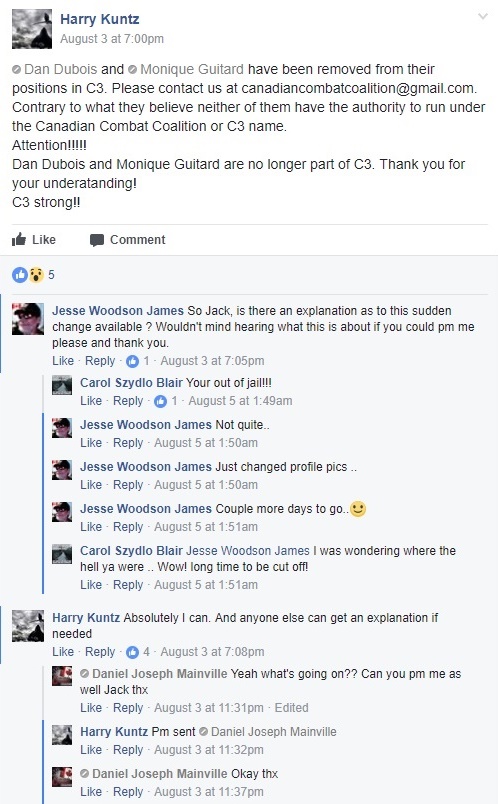 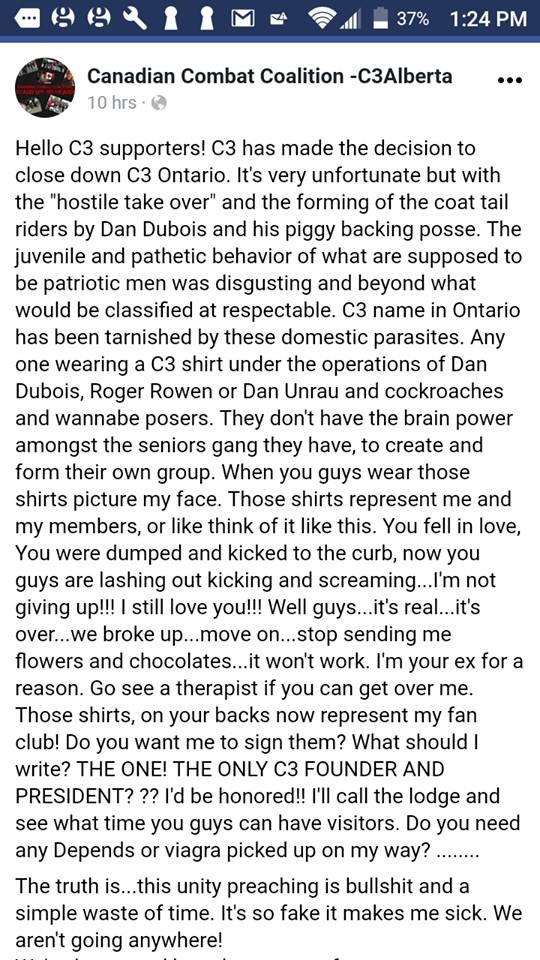 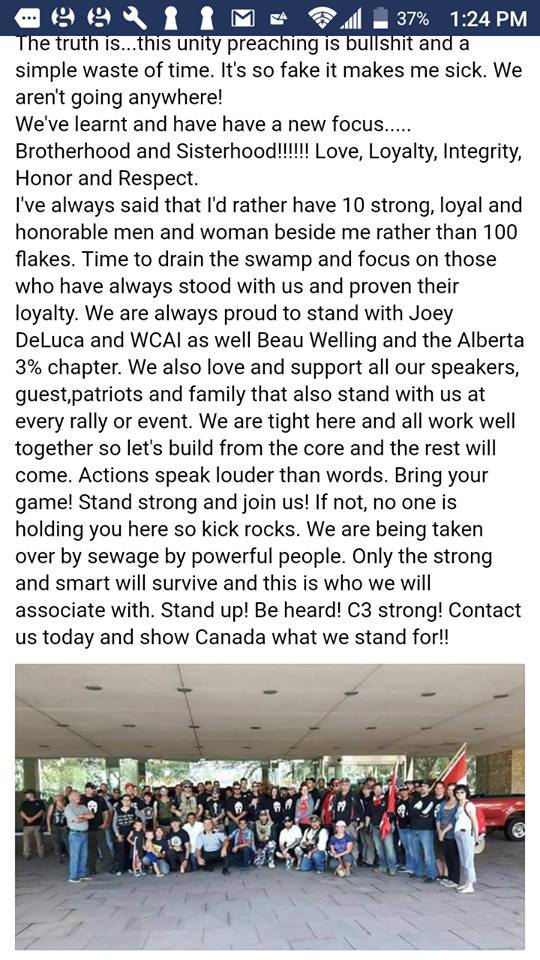 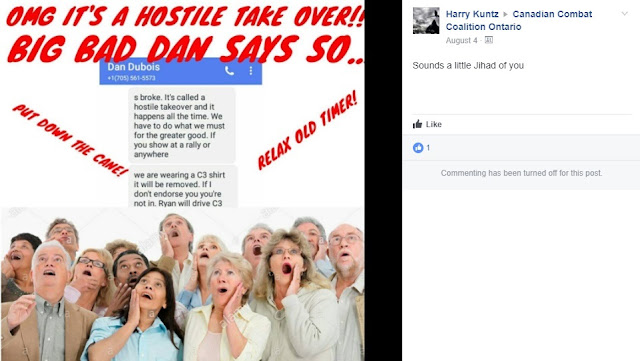 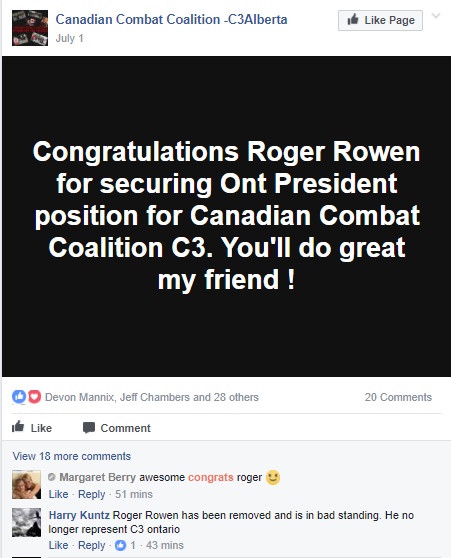 By the way, fun fact. In October Ryan Dean will be appearing in court in Leduc, AB on charges related to allegedly assaulting his then girlfriend and later her 13 year old daughter.

Ryan also took the opportunity while burning bridges to go after another Calgary-based anti-Muslim activist accusing Karyn Draper of working with "antifa" (Dean is here posting as "Jack Blackmail" now): 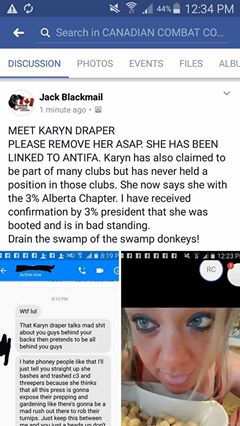 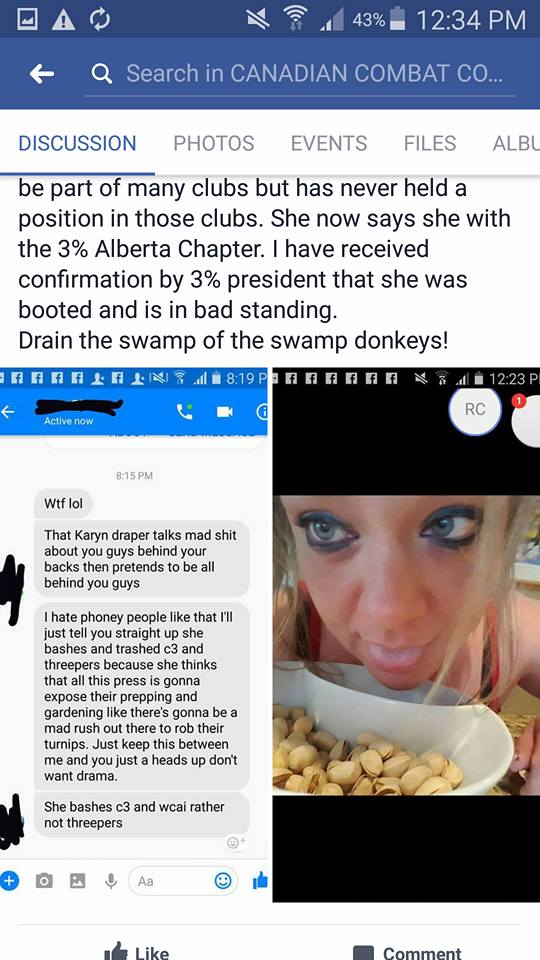 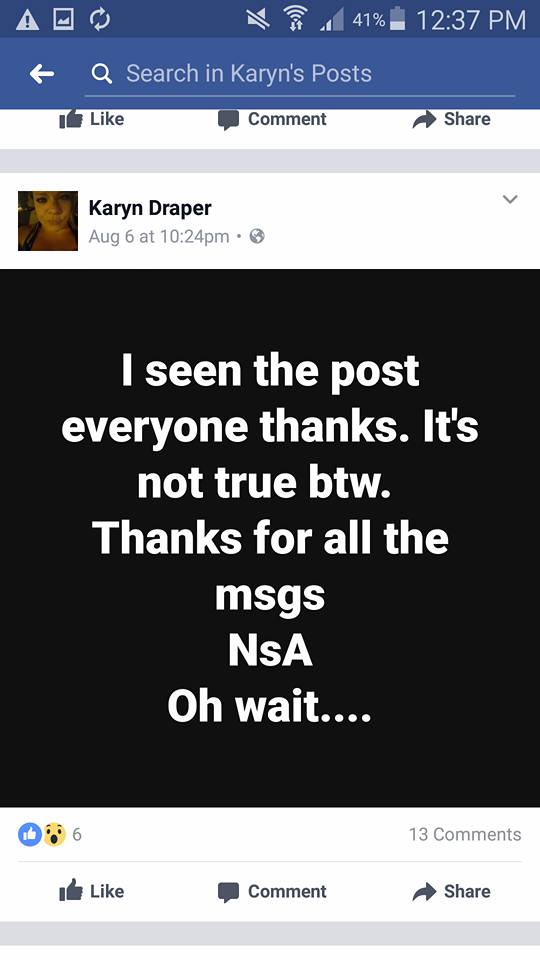 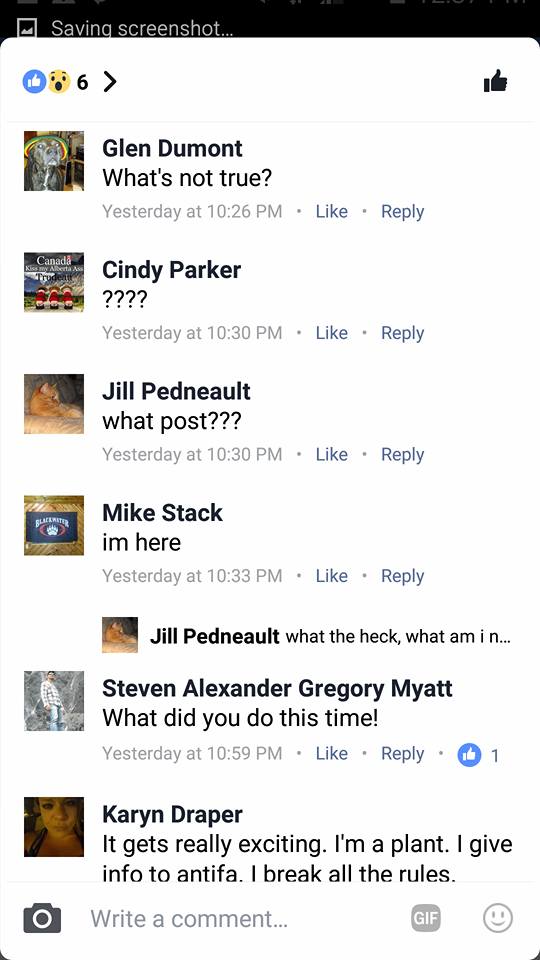 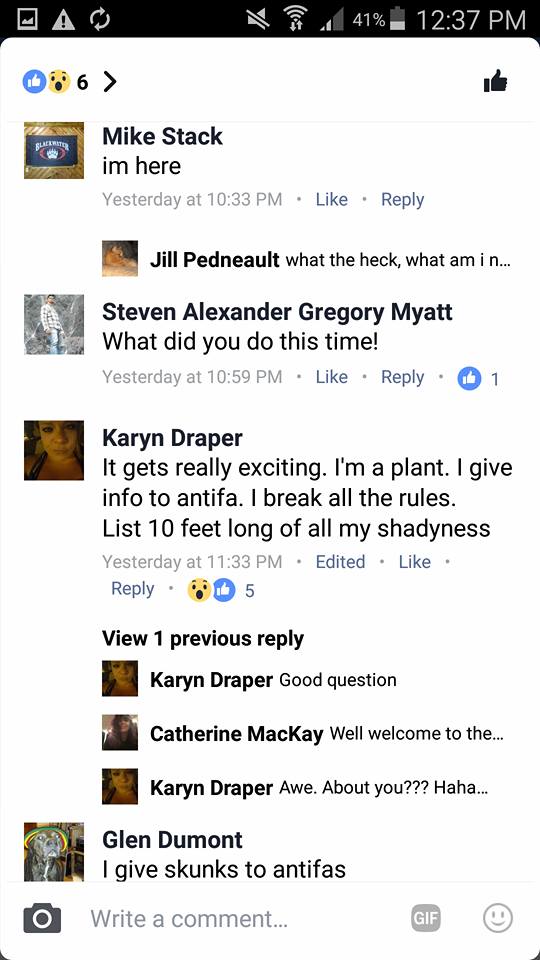 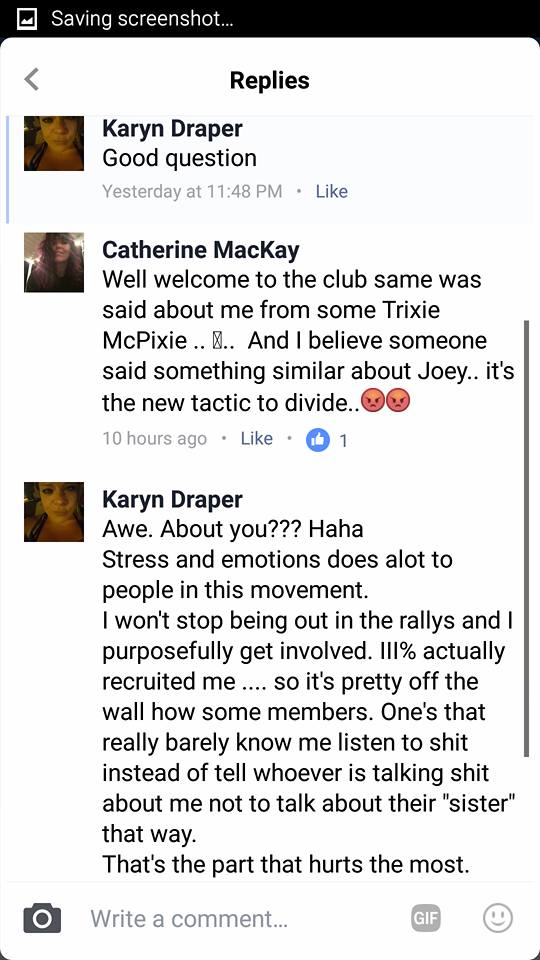 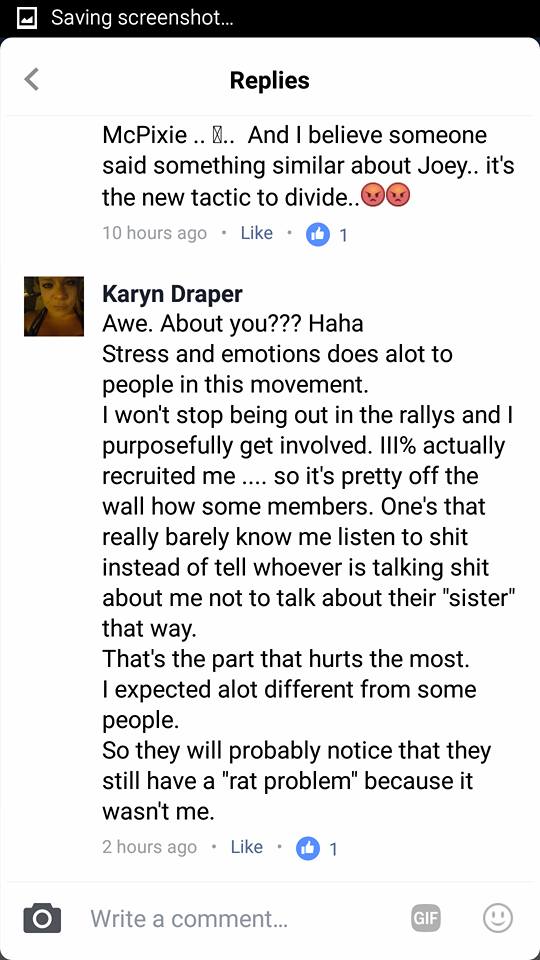 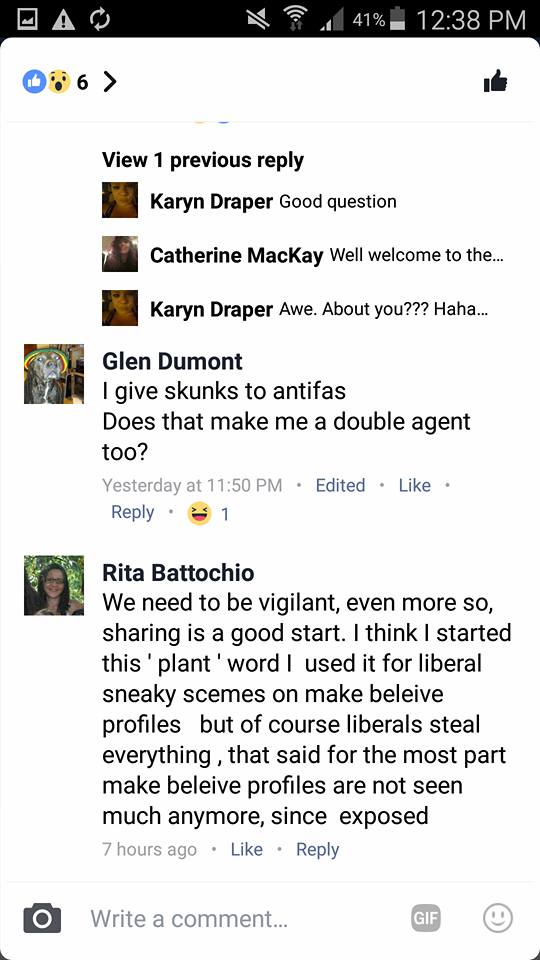 It is interesting that Dean is claiming that Draper is an "antifa" plant (she isn't) when we have evidence of Ryan Dean himself trying to make a deal with Calgary anti-fascists this week (his efforts were never seriously considered, btw). If I'm given permission, I will post the exchange that occurred which culminated in more threats from a frustrated Ryan Dean.

But also interesting is the III% mention since they are currently having their own problems:

Word has it that Beau Welling "fired" his Zone 8 captain and that he is having difficulty maintaining control over the Alberta Threepers. His post above on the III% Alberta page as well as the following posted by Draper seems to confirm that there is at least some level of dissent: 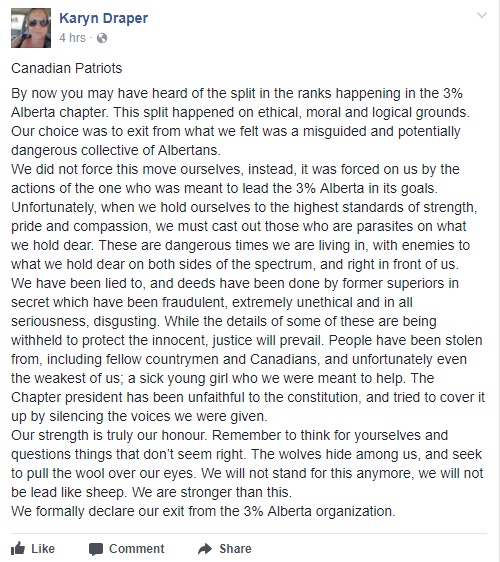 So, a fractured III% militia plans on providing "security" at an event organized by a man who is alleged to committed an act of domestic violence, who can't maintain leadership of a group he founded, and who's new group MAY have sent two threatening messages to a community journalist who recorded the threats and published him on his YouTube channel.

Yep, this is all certainly the hallmark of a master political strategist.
Posted by Nosferatu200 at 23:35

This is funny to say in the least, there seems to be constant in-fighting for power in all of these various groups. I jump in and out of them to get an idea of what is going on. You have to blend in very well because once you let thoughts out of who you really are and what you think you get mobbed.