It has now over a week since ARC published the list of Canadian Nationalist Party members which include such individuals as neo-Nazi Paul Fromm, neo-Nazi and former Moose Jaw Soldiers of Odin chapter leader Jody Issel, and Islamophobe and bigot Kevin Johnston. Due to the major national story that broke last week concerning Justin Trudeau the CNP list drop understandably didn't get a lot of coverage initially, however it seems that some journalists have taken another look at the story: 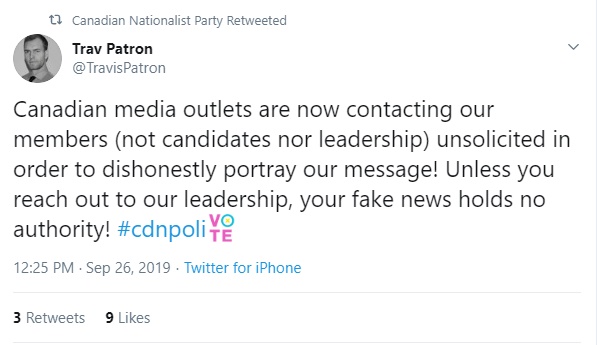 Earlier this week CNP founder and leader Travis Patron posted the list himself having lifted it directly from the ARC blog in an ill-advised display of bravado. That was probably a poor decision especially considering the fact that Patron's own dishonesty may very well get his party deregistered:

But ARC wasn't the only news source (and we are a news source) that posted a membership list:

2. To get official party status, at least 250 Canadians must sign membership declarations and Elections Canada confirmation forms. So who were those founding members?
— Stewart Bell (@StewGlobal) September 23, 2019

3. Shaun Walker, a former leader of the National Alliance, which SPLC calls a "major neo-Nazi organization." Online, he has said he was born in California. https://t.co/SIl5aQnRlB pic.twitter.com/Gv00HUeVnC
— Stewart Bell (@StewGlobal) September 23, 2019

6. PPC officials - including those responsible for media relations - did not respond to repeated requests for comment.
— Stewart Bell (@StewGlobal) September 23, 2019

I find this all very distressing since Bernier insists there are no racists in his party and that racists aren't accepted:

I also can't help note that there is less than six degrees of separation between the PPC and the CNP:

Btw this was Darik’s response to being outed as a member of the Canadian Nationalist Party pic.twitter.com/6KxZ1y7CBv
— Michael Bueckert (@mbueckert) September 24, 2019

But there was a third person found on the PPC list who has been someone we've been keeping track for a while though we never knew her real name.... until now:

Our readers knew her as "Jenny Hill" but Pegida Canada's founder's real name is Janice Bultje. The folks with The Scaffold did some incredible investigative journalism in tracking down the identity of Ms. Bultje:


“Month after month we’ve seen “Jenny Hill”, who we now know as Janice Bultje, organizing and headlining hate-rallies in Toronto. Many of these rallies have turned violent. Bultje has consistently engaged in the wilful promotion of hatred against Muslims in Canada and has brought a collection of far-right groups and individuals together for this purpose. It’s good to finally know more about the organizer behind these rallies” said an activist with a Toronto-based anti-racist group who spoke to The Scaffold on condition of anonymity. “She has invested a lot of effort in maintaining her anonymity. Even reporters like Sue Ann-Levy, writing for the Toronto Sun, have used her alias “Jenny Hill” when quoting her for publication.”

Bultje was identified as a result of a major donation her husband Phil Bultje made on behalf of his Chatham-Kent construction company, Southwestern Construction Inc. to Eben-Ezer Chistian School, helping to pay in part for a $1.2 million gymnasium expansion, as reported by Chatham Daily News. A photo of Bultje was published online, alongside her husband in an article about the gymnasium’s completion. Phil Bultje is also the Chair of the Eben-Ezer school’s board of directors.

In fact not long before Bultje was identified as the leader of Pegida Canada, one of the hate group's supporters was convicted of an assault that took place during a Pegida rally. Since being identified Bultje is now claiming that she is being threatened and harassed which, in the parlance of the far right, likely means she has been denounced and criticized for her bigotry and while groups like Pegida like to dish it out they certainly can't take it themselves.

In other tangential PPC news, Ryan Dean and his goof troop has been an issue again: 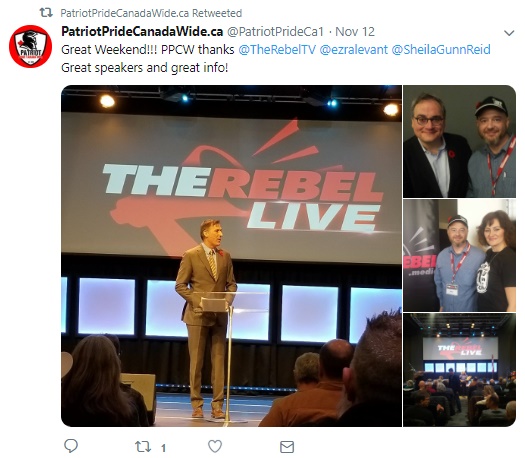 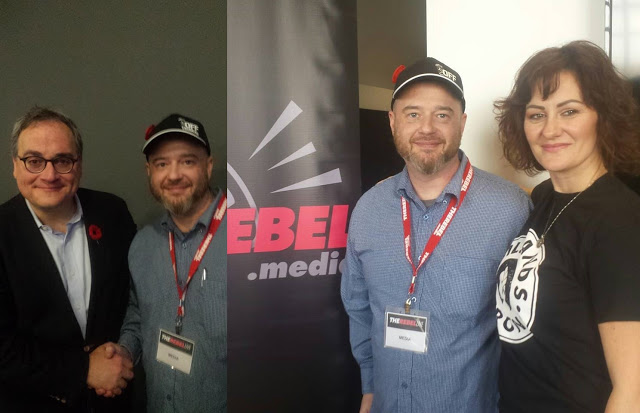 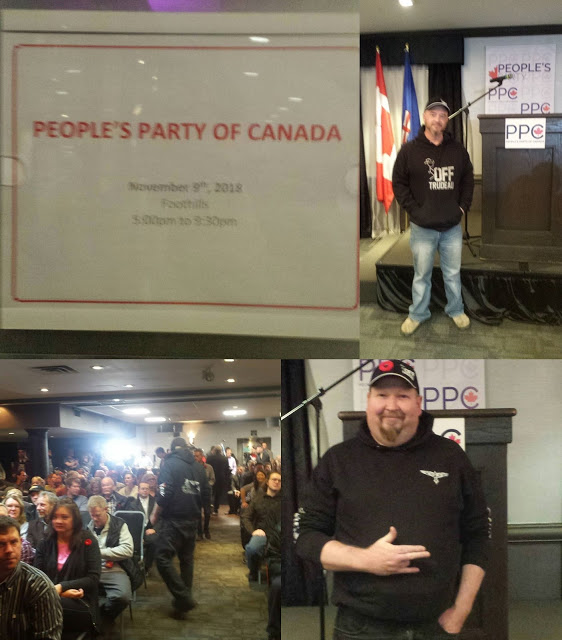 These photos are from last November when Dean and co. attended a PPC event sponsored by Ezra Levant's Rebel Media (Dean was given press credentials).

Lately I've avoided writing about Dean since he's someone who does most of the things he does for attention because he wasn't hugged as a child. However recent events have caused me to grudgingly turn my attention back to him.

Earlier this month he began harassing Queerflex, a safe space for members of the LFBTQ community to work out. Dean who is also spectacularly homophobic had started accusing Queerflex of "associating with Antifa extremists" which in Dean's mind is essentially anyone he decides to beef with for any reason. Of course he can't actually back up this claim....

.... but then Dean has not been especially concerned for such trivialities as "proof" before.

Duncan Kinney of Progress Alberta discussed this and other Dean-related issues on The Progress Report podcast (giving a nice little shout-out to yours truly) with Katie Cutting, Bridget Stirling, and Mack Lamoureux. As of September 13 the police have been investigating Dean's blog posts targeting the gym. In the meantime however Queerflex has temporarily closed down, suspending classes and memberships and enacting greater security measures:

"The posts targeting Queerflex are part of a strategy adopted by local hate groups to paint all anti-hate and LGBTQ organizing efforts as an example of dangerous, radical activity." And this is exactly why journalists should not take members of hate groups at their word. https://t.co/mueQb2frf0
— Bridget Stirling (@bridgetstirling) September 13, 2019

"The QUEERFLEX gym in central #yeg has cancelled all programs and suspended memberships after an online group shared the names and personal information of several members of the gym's management and clientele. Police are investigating." @edmontonjournal https://t.co/S223DkAWiV
— John Humphrey Centre (@jhcentre) September 19, 2019

The recent actions of hate groups here in Edmonton are disturbing, they’re cowardly, and we must unite together to condemn them.

Dean and company also made news this past Sunday when he and his goof troop harassed participants of a climate crisis rally specifically targeting FNMI peoples:

At one point, CTV News Edmonton captured video of a man appearing to mock an Indigenous dance, while drummers and singers performed.

He later identified himself to CTV News Edmonton as Mike Kirk.

“There’s a theory that Europeans stole this land. And I find that absolutely ridiculous,” said Kirk, who denied he was mocking the Indigenous dance, but acknowledged he shouted out during the prayer.

Kirk has found his way onto the blog a number of times including when as a member of the SoO he attended a UCP event.

Now apparently Dean has gotten it into his head that threatening a LGBTQ friendly gym and harassing indigenous dancers makes him a journalist. As such this week he attempted to make some coin: 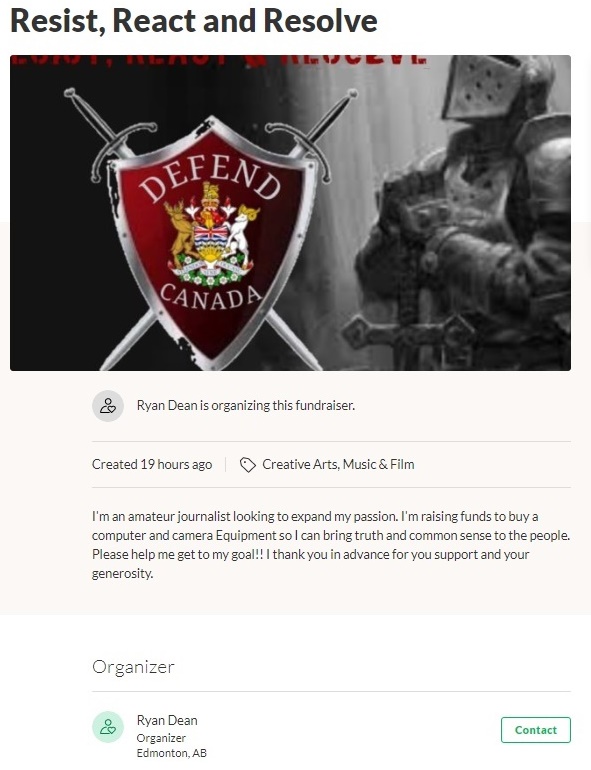 Hey, grifters got to grift amirite?


Dean responded with the grace and dignity that we've all come to expect from him:

And if none of this is enough for new readers to recognize Dean for what he is, this is what he's done to his dog:

Unsatisfied with forcing a queer friendly gym to close its doors, Ryan Dean is now parading his pit bull around in public as “Antifa Hunter”

Yeah, he's endangering his dog by implying it is a weapon:

Oh, and then there's his continued harassment of his children's elementary school from which he's currently not allowed to enter as he will be charged with trespassing.

It has been edited for obvious reasons: 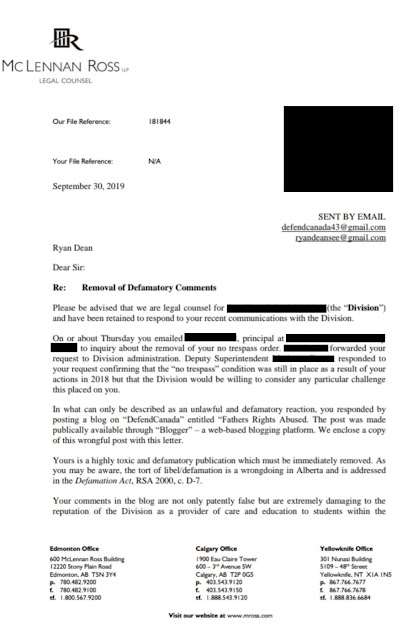 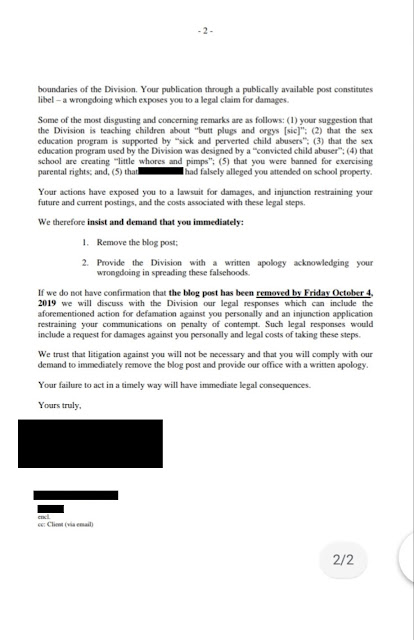 Finally Chris Vanderweide continues to happily relive what is apparently the high point in his life when he (a) sucker punched and blind-sided (using a helmet as a weapon) counter-protesters who were protecting a Pride event in Hamilton from the hate groups (including CNP members) with whom he was associated with and (b) engaged in what appears to have been a premeditated attack on other counter-protesters at the Eaton's Centre after a Pegida rally. It is clear that he needs to be reminded of the narrative they are pushing that they were the victims given how happy he is remember bashing people with a helmet: