Racists apparently don't take long weekends off, and neither do we.

PEGIDA held their monthly hate-rally in Toronto, and it was decidedly quieter than usual.

PEGIDA is reportedly very boring and has a terrible turnout.

This thread, in particular, courtesy of Twitter user and photographer du(ali)ty is fantastic:

As quiet as it was, there was reason for concern:

As usual, reports state that the counter-protest easily dwarfed the 8 or so PEGIDA members. More of this, forever.

PEGIDA also had a "flash" rally in London, ON on August 28: 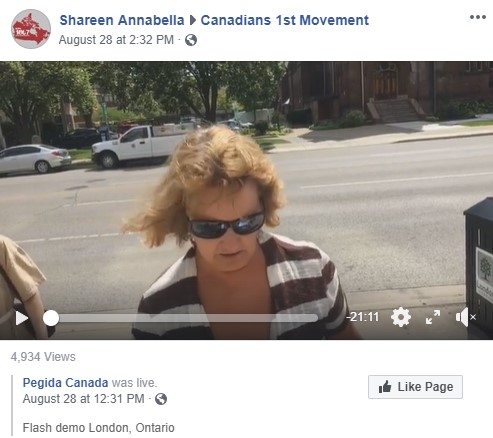 En route to Estevan, he stopped in Winnipeg and hung out with Proud Boy Todd McDougall of Winnipeg Alternative Media. Our friends at FF1 were quick to put notice out to the city: 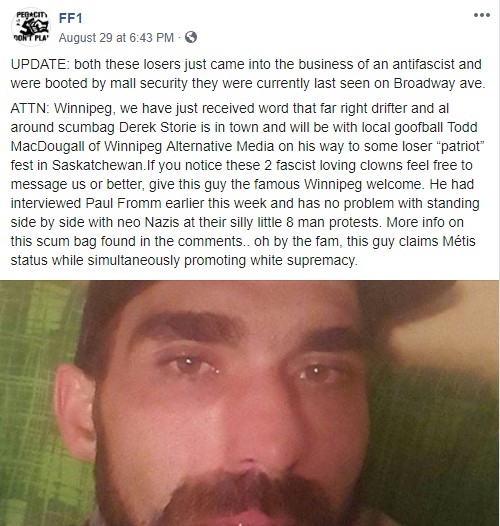 Storie and McDougall decided it was a good idea to harass a Winnipeg-based antifascist organizer and founder of FF1 at his business.

We have no idea why they uploaded this, since it makes them look like absolute chumps.

So here’s the CCTV footage of Todd MacDougall of @WPGAltMedia and goofy ass fascist Derek Storie who came into my store to do I don’t know what only to get to get clowned and thrown out of Portage Place Mall. /1 pic.twitter.com/BgpKmz8QO9
— Omar Kinnarath (@OmarX204) August 31, 2019

They entered my place of business clearly intoxicated. I asked them to leave. As you can see by the by the video, they refused. It was not my desire to engage or do business with them, so I used the shopping mall's safety protocol by calling mall security to have them removed.

McDougall regularly rails against Kinnarath and the fine folks of FF1.  We're sure this stunt won't endear Todd to the Winnipeg antifascist community.

Spotted in Saskatoon today. If any of our followers see any more please tear them down, only if you can do so safely. pic.twitter.com/ZYTyKjAoVl
— Yellow Vests Canada Exposed 🏴 (@VestsCanada) August 31, 2019


Back in Ontario, Paul Fromm and Lisa Thompson (Yellow Vests Canada) have both applied to speak to Hamilton City Hall.

Fromm wants to address "free expression," while Thompson is concerned about YVC optics.

That will be interesting, given what an absolute cesspool Hamilton has been lately.

Also in Hamilton, the weekly YVC rally was pretty quiet, presumably because so many of them went to Mullet Fest.

Well, I guess this explains why the forecourt of #HamOnt city hall was so quiet today.

I'd ask if there was any chance Saskatchewan could keep them, but I've always been opposed to the practice of trucking our garbage.#YellowVestsCanadaAreAHateGroup https://t.co/YvMNxVZJDd
— The Hungover Pundit (@hungover_the) August 31, 2019