After James Sears was led away in handcuffs last week, the sentencing of LeRoy St. Germaine to one year house arrest for promoting hatred against women and Jews is anti-climactic at best. While he received the maximum one year penalty (6 months/count), he avoided jail time because, according to Justice Blouin, his Indigenous heritage and poor health (heart and lung problems) needed to be taken into account. He added that "although Mr. St. Germaine was aware of the content of Your Ward News as edited by Sears, there is no evidence he created any of it.” St. Germaine also expressed regret about the direction the paper took after Sears came on board. Previously it went after "dirty politicians" and St. Germaine said he would like that to become the focus once again.

While I appreciate the validity of some of the mitigating factors in this case, I don't believe justice was served in deciding St. Germaine should avoid jail time altogether. His lack of respect for Your Ward News' victims is striking. When offered the option of a sentencing circle, he declined because he did not want to apologize. Outside of court today, when asked what he would say to his victims, he stated they should "suck it up and get over it."

Leroy St. Germaine has just walked out of the College Park Courthouse. Germaine tells @CityNews he doesn’t believe any of the articles posted on Your Ward News included hate speech. He also plans to appeal his conviction. pic.twitter.com/oFnw9IS9Ft
— Adrian Ghobrial (@CityAdrian) August 29, 2019


Then, of course, likening Sears to Christ and saying the paper will be back blows any assertion of St. Germaine's regret or desire to distance himself from Sears out of the water: 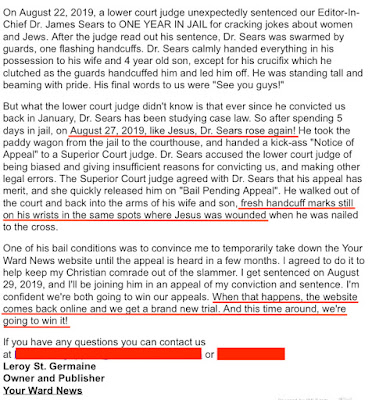 And while St. Germaine evidently didn't write any of the hateful material that's in violation of S319(2) of the criminal code, as publisher, he had the final say in whether to print those words and images. I believe that responsibility should carry more weight in Justice Blouin's courtroom.

As St. Germaine begins organizing his appeal, Sears' is already underway and he is out on a mere $500 bail. His bail conditions include taking Your Ward News offline, refraining from contacting any of his victims, and, the most challenging for Sears, not making any public statements. His new lawyer, criminal defence attorney Ian McCuaig, will have quite the challenge in convincing the court that Sears' conviction and sentence was arbitrary, politically motivated, and "too harsh."

EDIT 1: Ian McCuaig acted as St. Germaine's attorney for the initial trial and sentencing. Obviously Sears liked the work he did enough to retain him for the appeal. It is unknown whether McCuaig will continue to act for St. Germaine as well. A preliminary investigation did not show McCuaig having any obvious racist or far right sympathies. However, more digging will be done to confirm.

At the time of writing, it is unknown whether Sears and St. Germaine's appeals will be heard together or when the appeals will begin. However, it is clear that for their victims, closure is still months away.

You can read the full background of this sentencing circus below: