Former leader of the National Alliance, at one time the largest hate group in the United States, now a PPC activist in Ontario.

I'm not sure I can articulate how big a deal this is. The National Alliance was founded by William Pierce and under his leadership became the largest hate group in the United States. He is also infamous for having written The Turner Diaries which depicts a violent revolution in the United States which ultimately leads to the extermination of non-white and Jewish Americans; ultimately the genocide of non-Europeans and Jews is extended worldwide by the new racist American government. This novel was used by the terrorist group The Order, Oklahoma City bomber Timothy McVeigh, and a host of others who have used the novel as inspiration for their murders.

After Pierce's death the National Alliance began to collapse. Erich Gliebe would succeed Pierce and after his resignation Shaun Walker briefly assumed leadership in part as a result of Kevin Strom's efforts to take over the group (Strom would later be convicted on child pornography charges):


In June of 2006, however, Walker's past caught up with him. He was arrested on federal civil rights charges for allegedly leading a series of organized attacks on Mexicans and Native Americans in Salt Lake City bars in 2002 and 2003. The conditions of his pre-trial release prohibited Walker from having any contact with past or present members of the National Alliance, forcing him to resign as chairman and hand the reins back to Gliebe. Walker and two co-defendants, Travis Massey, the former Utah spokesman for the Alliance, and Eric Egbert, were convicted in April 2007 of conspiracy to interfere with the civil rights of individuals based on their race. On Aug. 13, 2007, Walker was sentenced to 87 months in federal prison. He later won a sentence reduction and was released on Nov. 27, 2009.

Walker now appears to be living in Ontario and is a member of the Peoples' Party of Canada led Max Bernier.

Thank you to Atlanta Antifascists for all the hard work they did digging up this information:

In 2006, Walker & associates were arrested for racially-motivated attacks in Salt Lake City.

In 2009, Walker's sentence was reduced following an appeal. https://t.co/LTQ1dXLR7D


If you've been looking at our Twitter recently, you've probably seen something about Chester Doles, a white supremacist in north Georgia who used to lead the National Alliance for our state.


On Facebook, Chester Doles makes a special appeal to "Shawn W" to attend the Dahlonega rally, writing on August 3rd: "I need you to stand with me [...] join me old friend."

(Of course, this does not mean Walker will actually make the trip to Georgia.) pic.twitter.com/tncRVyDkgU
— Atlanta Antifascists (@afainatl) August 29, 2019


Shaun Walker describes his background image on FB as "a vineyard in Vineland, Ontario, near Niagara Falls".


None of this would matter if Shaun Walker had left the white power movement.

However, Walker broadcasts his worldview on Twitter, where he rails against immigrants, promotes the myth of white "genocide" in South Africa, and supports the white nationalist "Identitarian" movement. pic.twitter.com/GS3xF7PDfZ
— Atlanta Antifascists (@afainatl) August 29, 2019


Online databases show that Shaun Alan Walker - the ex-National Alliance leader - lived in Napa, California as well as Salt Lake City UT and in West Virginia near the National Alliance headquarters. Napa CA is known for its vineyards.


Recently, Shaun Walker has been active in with the People's Party of Canada, a Right-wing populist party with anti-immigrant stances. Walker helped establish the local Party group for the PPC in St. Catharines, Ontario.

the person he's responding to in the second image is Leigh Stuart, who got booted from the PPC for posting neo-nazi imagery on fb. she also harassed refugees with 2 other white nationalists last year: https://t.co/RJJpxbG431
— Bob Nesta Makhno 🌈🔥🏴 (@GilletteMachNo) August 29, 2019


More. I checked out Shaun Walker's profile using one of my socks. He and my sock have a mutual friend in the late Ingrid Zundel (nee Rimland), wife of holocaust denier Ernst Zundel. pic.twitter.com/teyzi9ggyO
— (((Anti-Racist Canada))) 🧛‍♂️ (@ARCCollective) August 29, 2019 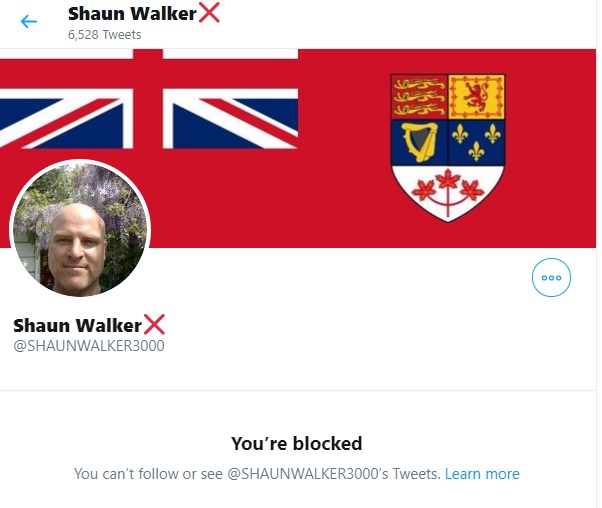 The question is whether he did it after I tweeted the story or prior to it being published which would suggest he wanted to stay out of ARC's sights?
Posted by Nosferatu200 at 21:01