Meet A PPC Candidate: People on Social Assistance Should Be Denied Voting Rights

So for a change of pace here's a story that isn't connected to a nihilistic racist death cult.... so far as I know at least.

PressProgress picked up ARC's story on the scuffle between white nationalist Derek Harrison who shoved the nearly 70 year old anti-Muslim conspiracy promoter Tarek Fatah who then proceeded to swat Harrison with his cane. It was an incident where no one came across looking good but I have to say that if you're a man in his later 30s or early 40s and you shove a septuagenarian in almost any context, you're really the asshole.

Derek doesn't seem to feel the same way as he responds to the PressProgress story by accusing Fatah of being a communist and suggesting he go back to his "shit hole country":

I included my own editorializing.

The incident occurred at the PPC meeting where Bernier unveiled his immigration platform such that it is. Harrison himself has become a rather big booster for the PPC and might even be credited with finding them a candidate.

With that in mind, meet Kelly Day: 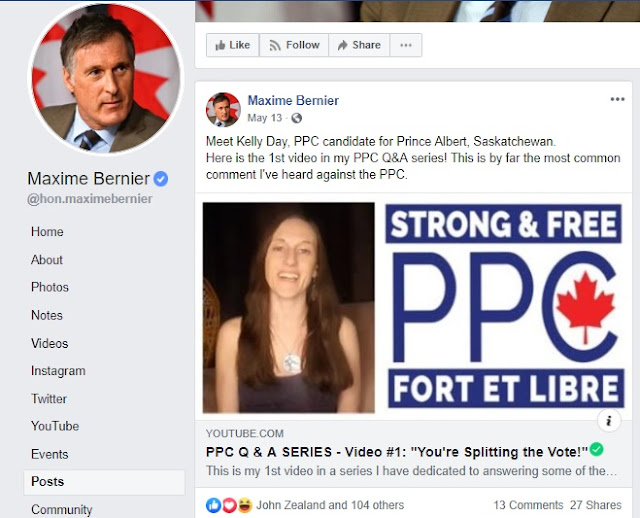 Day claims to be a former leftist who "walked away" from the ideology. She has also been boosted by the likes of Ezra Levant's "Rebel Media": 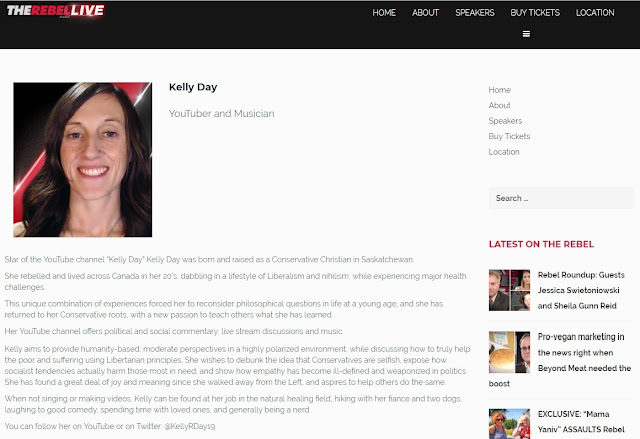 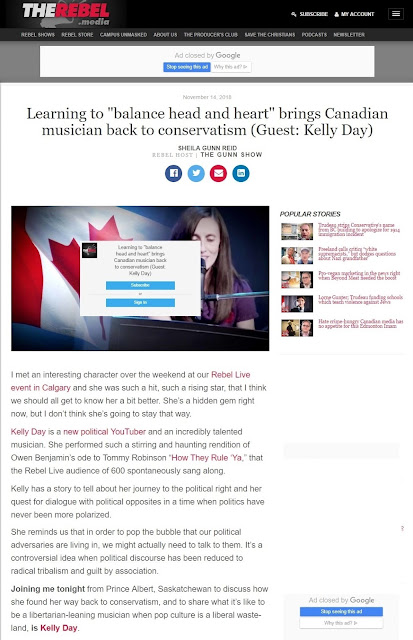 Perhaps her most high profile engagement was performing in the UK for football hooligan Stephen Yaxley-Lennon, a man convicted of multiple crimes including numerous assaults, using a false passport (he was trying to enter the United States where he was banned for drug offenses), and mortgage fraud; he's currently serving time after being convicted for breach of the peace and contempt of court. He also has a history with the BNP: 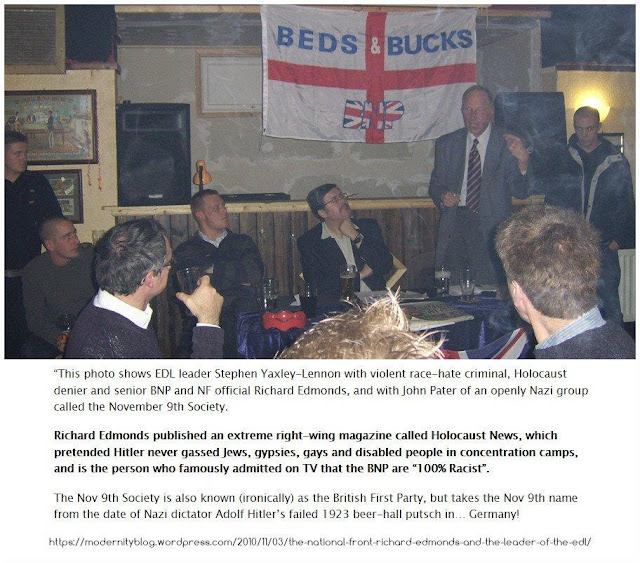 But hey, he hates Muslims so Ezra and company are happy to overlook these character flaws. Here Harrison introduces a video in which Day performing what appears to be the song "Hallelujah" for Yaxley-Lennon but with the lyrics significantly changed:


Leonard Cohen would not approve.


She has also promoted the views of self-styled counter-terrorism Tom Quiggin whose expertise and credentials have been called into question; his primary claim to being an expert on the subject is that he appeared before a parliamentary committee along other "experts" on Islamic extremism as (ironically) Tarek Fatah: 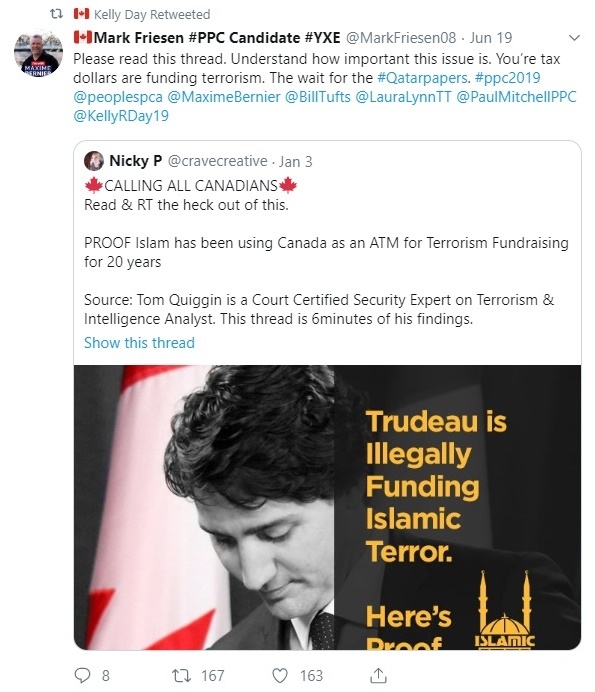 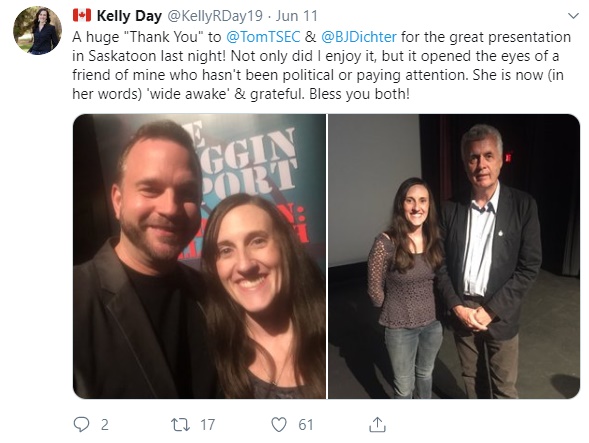 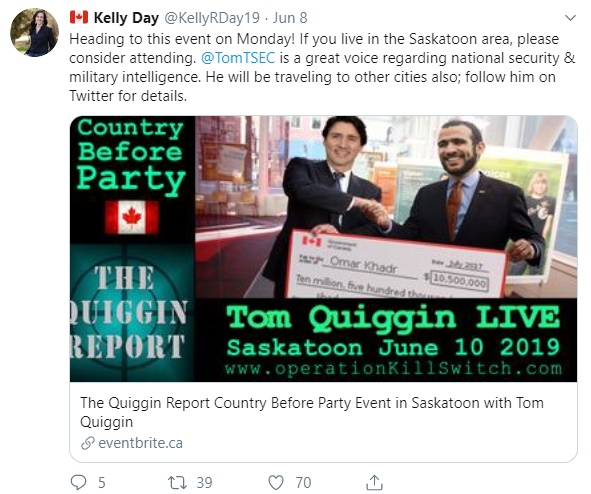 Did you do 30 seconds of background for your @nationalpost story? These are 2 guys in a basement reading Breitbart. https://t.co/5fZ6CoQhxm
— Stephanie Carvin (@StephanieCarvin) August 23, 2016 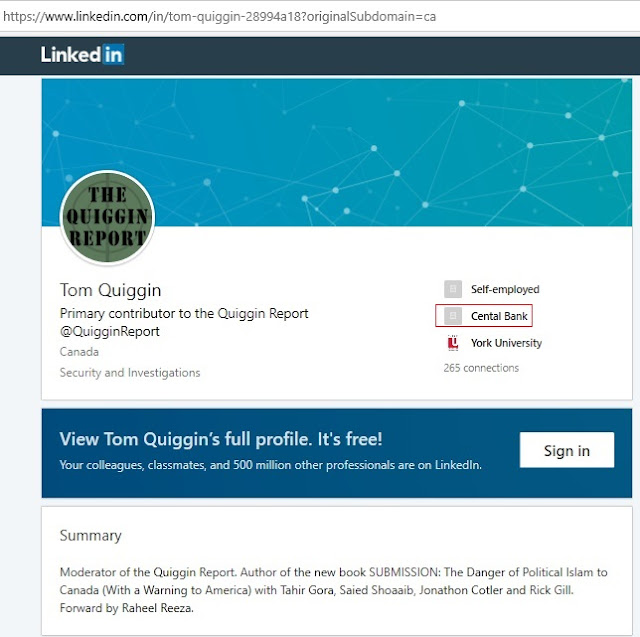 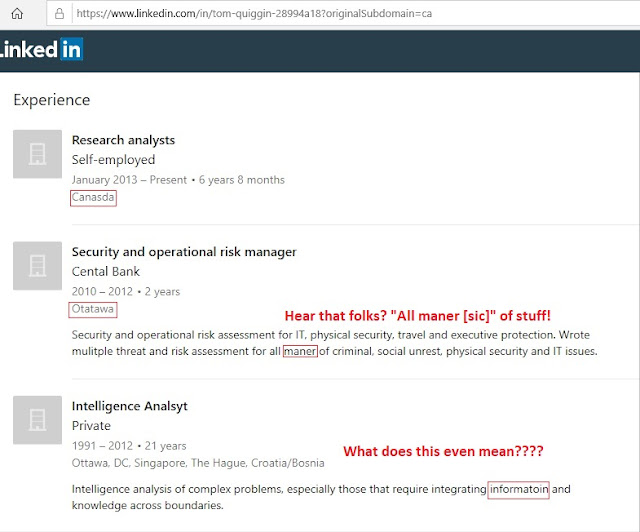 So of course, Kelly Day is a perfect PPC candidate!

Soooo, are the folks in the PPC aware that she agrees people on social assistance shouldn't be allowed to vote?

Then there was the discussion between the two guys about how immigrants shouldn't have the right to vote for at least three generations which she doesn't push back on, though she does agree with them concerning what she regards as "waste" when it comes to pensions for immigrants:


Actually the PPC would likely be okay with this proposal.

The rest of the Livestream was rather bonkers. Here are a few other clips:


We also learned something that seems to frighten Derek Harrison.


These were just included to provide some additional context.

Now I really doubt that Ms. Day will win in her ridding. Hell, I'm not sure Bernier will win in his own ridding. But as the election looms closer, I'm sure we're going to learn more about a lot of the candidates.
Posted by Nosferatu200 at 17:36