Why are the pretty ones so dumb? 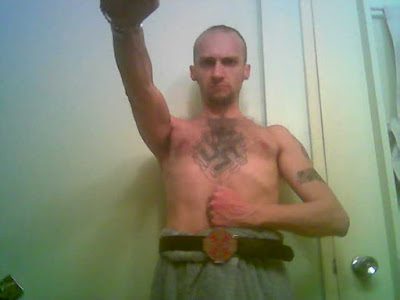 “All Jews run social media, why would he be on social media if he hates Jews? Is he stupid?” Well... pic.twitter.com/7c0whWv7L4
— Yellow Vests Canada Exposed 🏴 (@VestsCanada) August 12, 2019 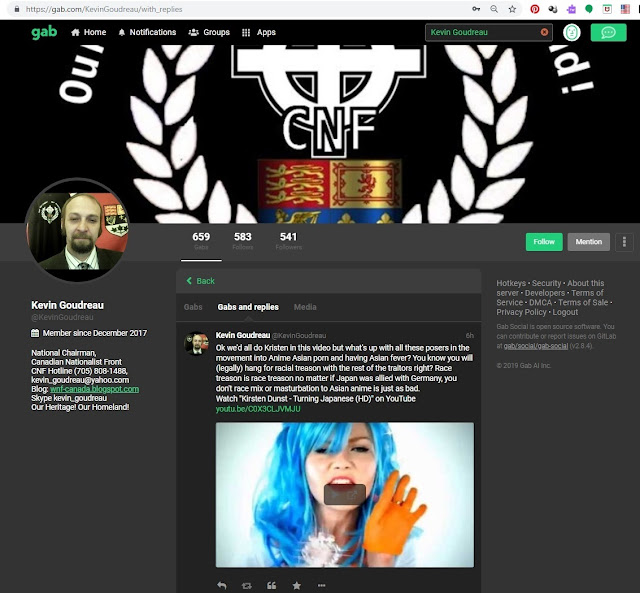 Back in June Blood and Honour/Combat 18 was declared to be outlawed terrorist organizations and thus banned in Canada. Not long after, the folks on Stormfront, including Goudreau, began to post furiously about the injustice of it all: 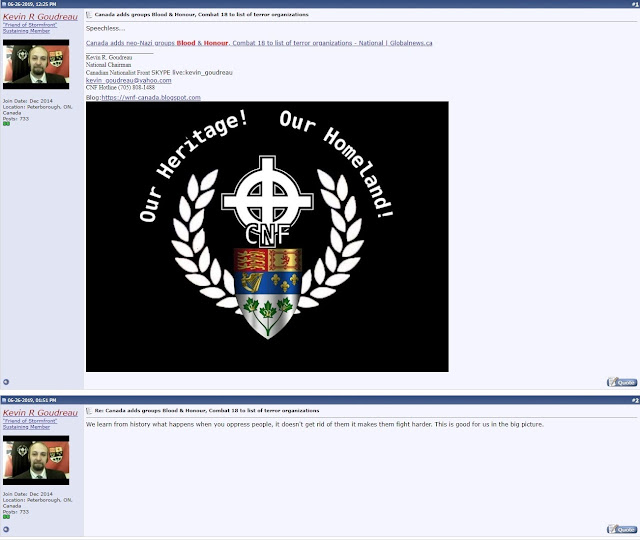 One of my favorite parts of the thread is "Cydonia" whining about how the designation is racist against white people: 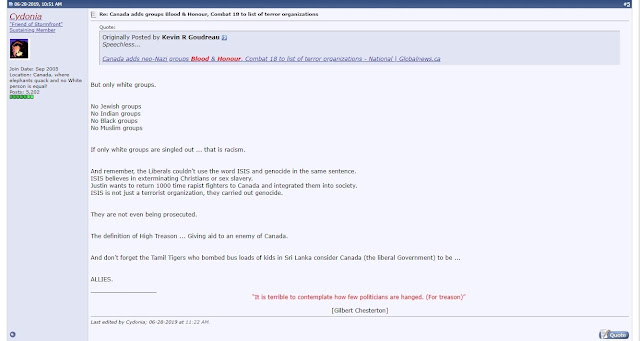 I mean there were literally jihadist terrorist groups mentioned as also being banned in the same document.

And there is already an extensive list in Canada of terrorists affiliated with all sorts of extremist views.

But you keep crying persecution there Cydonia!

Also of interest is a person who once was featured quite heavily on the blog at one point when he was associated with the Aryan Guard and Blood and Honor but who had fallen a bit off my radar:

Bill Noble would like to suggest that the folks with Blood & Honour were persecuted, innocent, little lambs, however he seemed to know a great deal about the propensity for violence in the hate group as evidenced by the secrete chat with an administrator for the Blood and Honour International Forum: 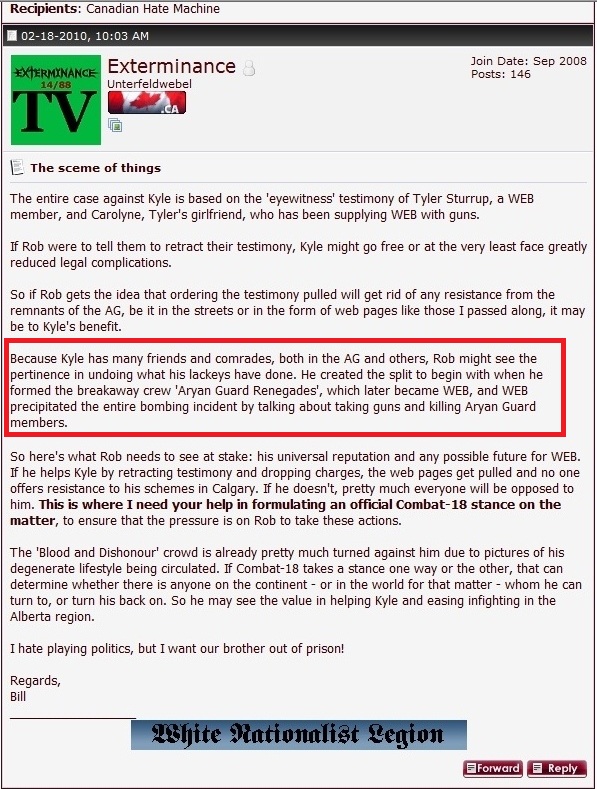 Noble is referring to the attempted murder of Tyler Sturrup via pipe bomb that Kyle McKee and an underage accomplice were implicated in. Though attempted murder charges against McKee were eventually dropped (he was convicted of possession of bomb making materials) it seems clear that Noble was much more aware of McKee's involvement than he had let on.

Incidentally when I originally posted the screen shot about, it resulted in a rather robust discussion: 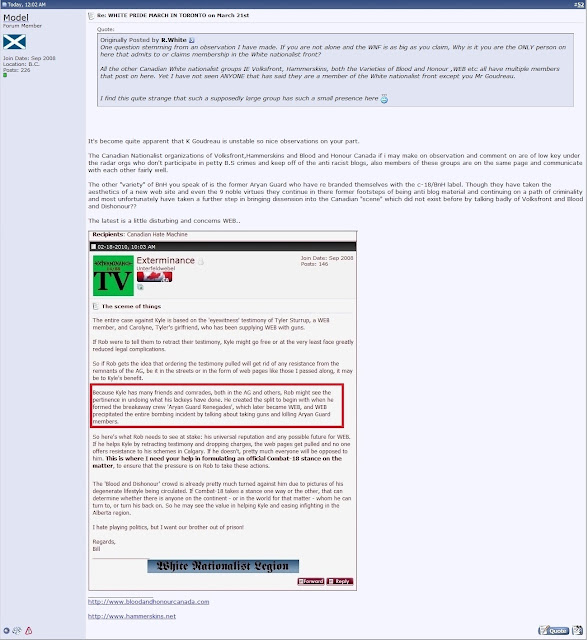 Robert "German_Pride" Reitmeier and Tyler Sturrup would eventually be charged and convicted of murder.

But back to the present. Kevin Goudreau seems to believe that the banning of Blood and Honour is an opportunity: 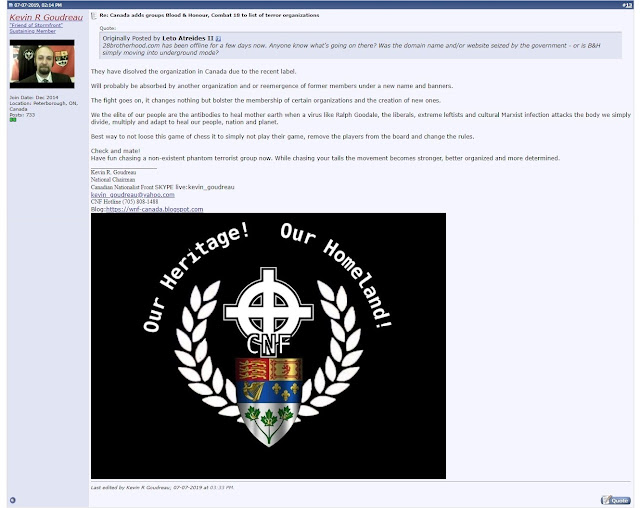 Now when he claimed here that Blood and Honour would be "absorbed" I should have realized what he was implying at the time. You see Kevin "No Show" Goudreau has a nearly 30 year history of self-aggrandizement. He is the Walter Mitty of Canadian white supremacist as Goudreau has claimed to have been at the center of every significant event in the history of the Canadian racist movement since 1989. He has also claimed to be the "real" leader of the Canadian movement and demanded other hate groups acknowledge what he presents as fact. 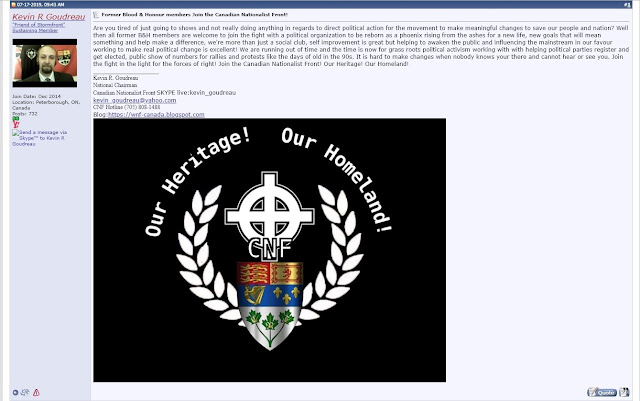 Of COURSE he would try to recruit Blood and Honour members!

Given his track record other Stormfront Canada posters (and these days there aren't that many of them) are rather skeptical of No-Show's organizational prowess and his ability to follow through with plans. Goudreau offers his participation in the Canadian Combat Coalition-organized march on Parliament Hill.... which never actually made it to Parliament Hill and which if possible was even more poorly attended than their last rather sad effort: 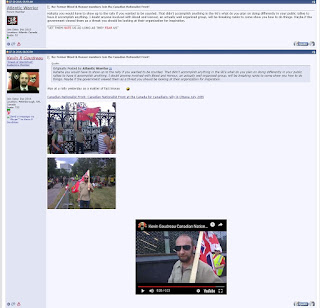 It might be instructive to know that Goudreau's participation in another CCC event and proposed participation in a scuttled WCAI event that would have begun with a torch march through Toronto such as which occurred in Charlottesville probably was less than helpful to their causes. Dan Dubois and the other CCC members/supporters can't claim they don't know that Goudreau is a Nazi this time:

2/ And here's more of KJJ being stupid at C3. He's complaining that counter protestors are calling them nazis. Anyone notice who's behind him in this video? pic.twitter.com/YrCaoCGvpe
— Yellow Vests Canada Exposed 🏴 (@VestsCanada) July 28, 2019

3/ If you guessed actual nazi Kevin Goudreau you'd be correct! Oh and the Canadian Nationalist Party were there, and they are an actual nazi party. pic.twitter.com/82oSxWSX8e
— Yellow Vests Canada Exposed 🏴 (@VestsCanada) July 28, 2019

I do appreciate that No-Show Goudreau also seems to be taking credit for this event as well:

However it seems that he is having difficulty convincing people that his White Canadian Nationalist Front is actually a real thing:

Now while Noble appears befuddled, Goudreau does get some love from another user:

Here's why this might make No-Show's life a little more difficult though:

I'm quite sure that Goudreau hadn't considered this, but he was fighting the imposition of a peace bond.

Guess how that turned out today?

BREAKING: Ontario court has ordered that Kevin Goudreau enter into the peace bond, finding that Warman has reasonable grounds to fear Goudreau based on threats made on Facebook. Crown is about to make submissions about proposed conditions of the peace bond.
— Rachel Browne (@rp_browne) August 12, 2019

Goudreau's peace bond conditions, in effect for 12 months:
-Do not communicate threats of violence online or otherwise towards Warman, 3 other @antihateca board members
-Do not be w/in 200m of Warman
-Do not possess weapons as per Criminal Code
-Do not apply for firearms license
— Rachel Browne (@rp_browne) August 12, 2019


I wonder how the judge who adjudicated the case felt about Goudreau trying to recruit members of a violent terrorist group recently declared illegal by the Canadian government? 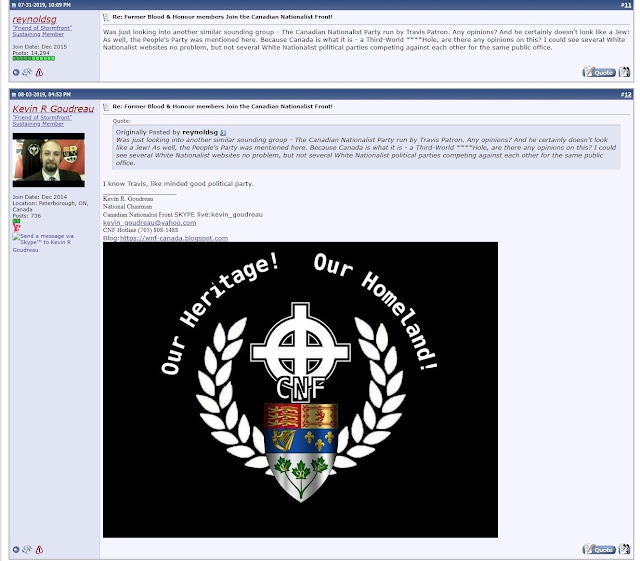 I'm sure Travis Patron of the Canadian Nationalist Party appreciates the support.