Martin Brousseau - A History of Violence

For our Community Safety Alert on Martin Brousseau, including a printable flyer, click here.

Martin Brousseau came onto our radar for alarming and aggressive behaviour as he traveled from Alberta to Ottawa for the Canadian Combat Coalition Rally in July. Brousseau exhibited escalating behaviours such as driving recklessly during a Facebook live video and driving his school bus onto the public sidewalk at a Yellow Vests Canada protest in Hamilton. We have covered Brousseau's actions previously here.

1. Martin Brousseau, who drove a school bus from Alberta to Ottawa, had a full on meltdown prior to reaching his destination.

He did this while driving. pic.twitter.com/Ify7TlhbBH
— Yellow Vests Canada Exposed 🏴 (@VestsCanada) July 21, 2019

this guy with the YVs (ID anyone?) parked a school bus on the sidewalk in an attempt to block counter-protesters. cops allowed him to stay parked there for about 30mins while threatening counter-protesters w arrest for swearing at him. because safety! 🙄 pic.twitter.com/zb6nxmT0Gy
— Bob Nesta Makhno 🌈🔥🏴 (@GilletteMachNo) August 10, 2019 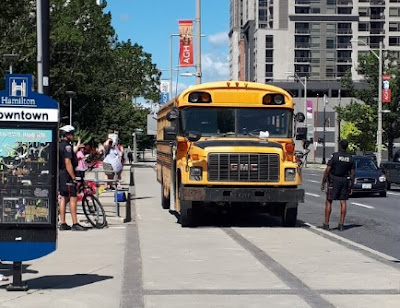 The "hate bus" in Hamilton 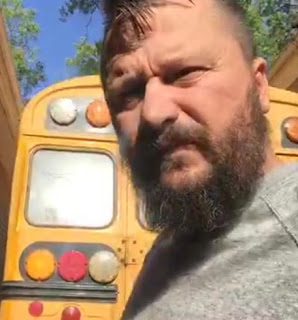 Brousseau with his dilapidated school bus

Brousseau has a violent past. According to court documents we have obtained, there is a history of domestic violence and assault. From a threat assessment included in the court documents:

Martin does not take responsibility for his actions and is quick to blame others. Due to his mental health, Martin may actually perceive things exactly as he describes.

An archived article from the Athabasca Advocate's court briefings describes an incident where Brousseau attached his then wife from behind, striking her and pinning her face to a cupboard. The police arrived and arrested Brousseau. 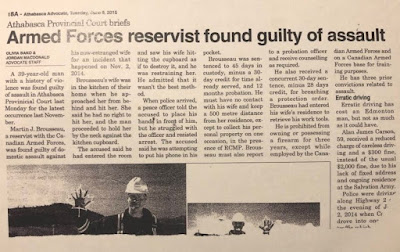 From public records, we learned that Brousseau strangled his wife in 2012. He did this while his wife held their 10 month old child who had been rendered unconscious.

In April 2015 Brousseau - against the orders established by the court - arrived at his estranged wife's home unannounced. He pushed his ex-wife to the ground and tried to pull his young daughter out from under a bed where she had been hiding by her legs. Brousseau's ex-wife's son, 18, attempted to intervene and suffered severe bruising to the neck. He was subsequently hospitalized.

Brousseau then went to the kitchen, turned on the gas stove burners and tried to ignite the gas with a lighter. The police arrived and Brousseau was arrested. Despite his ex-wife's filing of an Emergency Protection Order, Brousseau continued to make contact on a few occasions despite court orders.

In October 2015 Brousseau was discharged from the Canadian Armed Forces.

Court records indicate a flag has been placed on Brousseau to alert authorities if he attempts to purchase firearms. It is unclear if this flag is ongoing, or was only for a determined period during his court proceedings.

As we continue to go through footage from Saturday's rally in #HamOnt, I'm curious why @HamiltonPolice felt it was a good idea to leave Martin Brousseau alone after he made repeated threats to detain counter-protesters. /1 pic.twitter.com/J3dr6ctwi9
— Yellow Vests Canada Exposed 🏴 (@VestsCanada) August 13, 2019

He even brought zap straps to do so! This guy - who parked his fucking BUS on the sidewalk and didn't get so much as a ticket - brought literal gear to detain people he deemed "causing trouble." /2 pic.twitter.com/I3fAgYShsu
— Yellow Vests Canada Exposed 🏴 (@VestsCanada) August 13, 2019

If you have knowledge of his whereabouts, contact us on Twitter at @VestsCanada and @ARCCollective or email us at yvcexposed@protonmail.com or arc.collective200@gmail.com.