First, we thought we would post a transcript detailing the heady days when "White Nationalists" would roll on their fellow travellers: 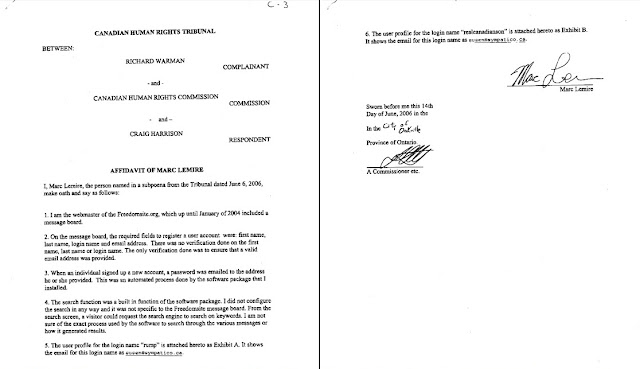 Marc Lemire kindly provided some of the evidence with which Craig Harrison was found in violation of the Canadian Human Rights Act.

Speaking of Marc Lemire, we simply can't get past this statement that he made during an appearance on Ezra Levant's program, "The Source":

We know. We've been beating this dead horse for a while now (see this particular post which , but we decided that when we first heard Lemire lie about his past, we would use every opportunity we could to prove him to be lying.

So here we go. Again. 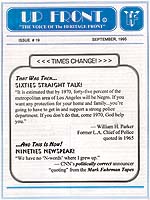 We're hoping to find an actual paper copy that we could scan and post later, but what we have here is the September 1995 (Volume 18) edition of, "UpFront." This was, for a long time, the Heritage Front's mouthpiece before the advent of the Internet, however in this particular edition we see the Heritage Front embracing the new technology as a means of disseminating information (this edition of the magazine was subsequently included on the Heritage Front website): 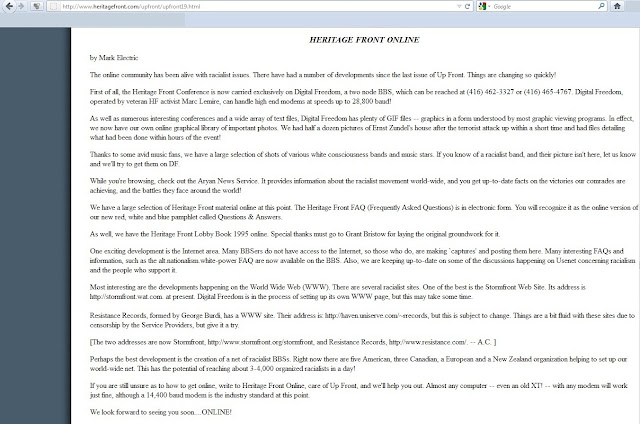 Wait a moment? Who is that being described as, "a veteran HF activist"?

This is significant, as it is the earliest known piece of writing connecting Marc Lemire to the Heritage Front which, in 1995, had just suffered a beating as a result the Grant Bristow CSIS connections as well as the testimony of a former HF member who had turned against the group and it's ideology and who's testimony did more to take down the hate group than any single person. At the time of the publication of this edition of, "UpFront," Lemire was 20 years old.

What did Lemire say again on, "The Source"?


Uh, the Heritage Front uh, was active back in, uh, the the 90s and I was a young kid at the time.... I uh, listened to some of what they were about, and uh, I went away from it. I mean I was involved with them peripherally in my teenage years.


In 1995, a 20 year old Lemire was described as a veteran Heritage Front activist.

In 2011, Lemire claims he was only peripherally involved with the Heritage Front as a teenager.

Come on Marc! You had to know that people would do some fact checking, right? Or is your opinion of your supporters' intelligence really so low that you think they aren't eventually going to figure you out?

Actually, you might actually have a strong case to be made on that past point, Marc.

[Off topic]
I like the dark look on this blog better.