Before we get to the meat of the article, we thought we would share something we found when looking at a link posted by BCL:

It doesn't say who are the ones who are making the requests, but given the word choices, we might suspect that it is our good friends at Free Dominion.

But hey, we could be wrong.

Speaking of Free Dominion, some of their members chimed in on the JT Ready murder-suicide which occurred yesterday. In response to original post which stated Read was neo-Nazi, FD member "shiva" posted the following: 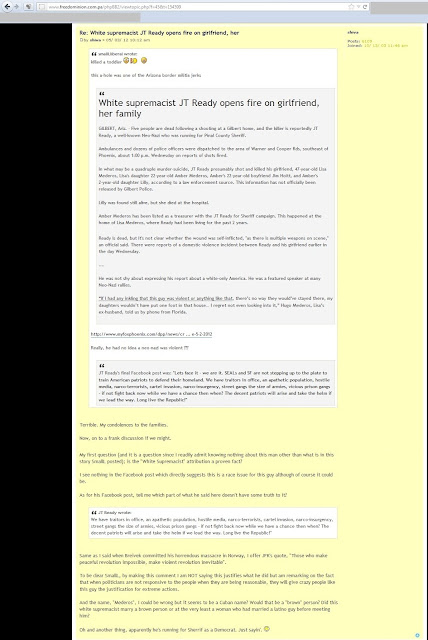 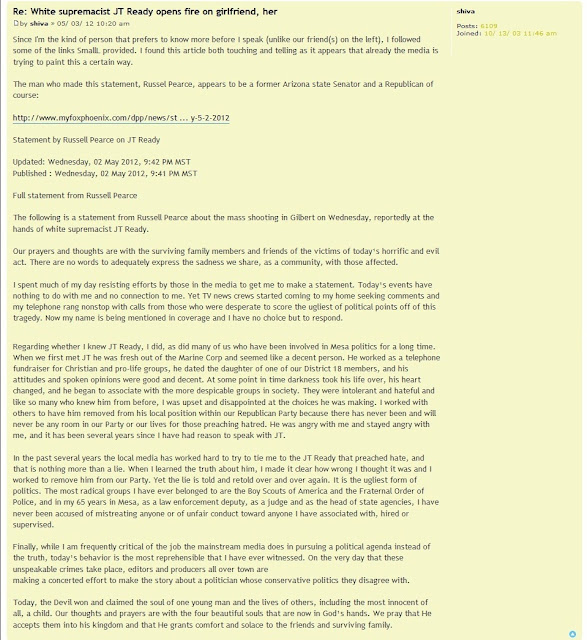 The relevant sections are as follows:

Terrible. My condolences to the families.

Now, on to a frank discussion if we might.

My first question (and it is a question since I readily admit knowing nothing about this man other than what is in this story SmallL posted); is the "White Supremacist" attribution a proven fact?
I see nothing in the Facebook post which directly suggests this is a race issue for this guy although of course it could be.

As for his Facebook post, tell me which part of what he said here doesn't have some truth to it?

We have traitors in office, an apathetic population, hostile media, narco-terrorists, cartel invasion, narco-insurgency, street gangs the size of armies, vicious prison gangs - if not fight back now while we have a chance then when? The decent patriots will arise and take the helm if we lead the way. Long live the Republic!"

Same as I said when Breivek committed his horrendous massacre in Norway, I offer JFK's quote, "Those who make peaceful revolution impossible, make violent revolution inevitable".

To be clear SmallL, by making this comment I am NOT saying this justifies what he did but am remarking on the fact that when politicians are not responsive to the people when they are being reasonable, they will give crazy people like this guy the justification for extreme actions.


Since I'm the kind of person that prefers to know more before I speak (unlike our friend(s) on the left), I followed some of the links SmallL provided. I found this article both touching and telling as it appears that already the media is trying to paint this a certain way.

The man who made this statement, Russel Pearce, appears to be a former Arizona state Senator and a Republican of course:

Hey, a healthy skepticism is a good thing. And someone should absolutely check into things before making a snap judgment (and if one were to check into JT Ready, one would note that he was, indeed, a White Supremacist as well as an anti-Semite). However it is more than a bit disturbing that "shiva" uses this tragedy as a means to make two claims:

1. While murder is not justifiable, JT Ready's "reasonable" views should be acted upon.... or else we might expect more of this.
2. "Conservatives" like shiva and (we presume) the folks on Free Dominion would NEVER make snap judgments. Only leftists ever do that.

On the second point, we ask, really?

Our friend "shiva" here mentions the Anders Breivik thread on Free Dominion. Hey, seems like a great place to look at Free Dominion members not jumping to conclusions.

Uhm.... this is going to take a while. Might as well pour yourself a coffee: 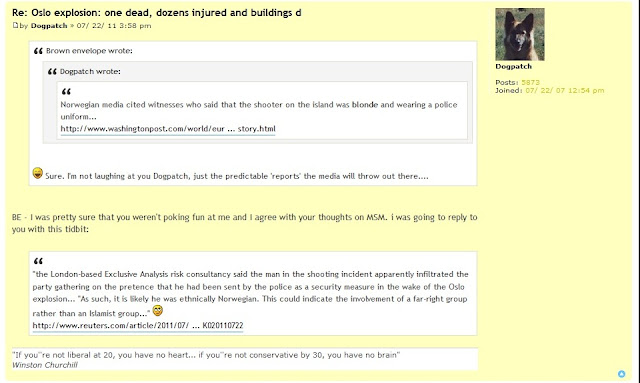 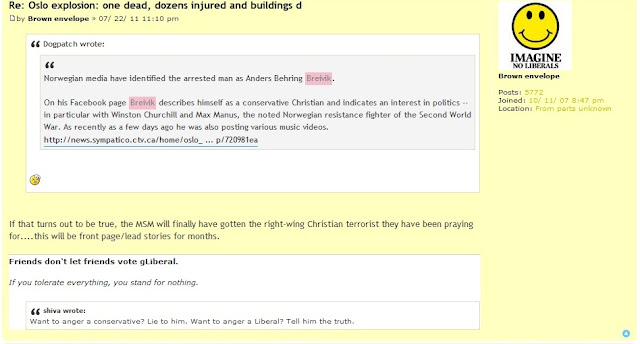 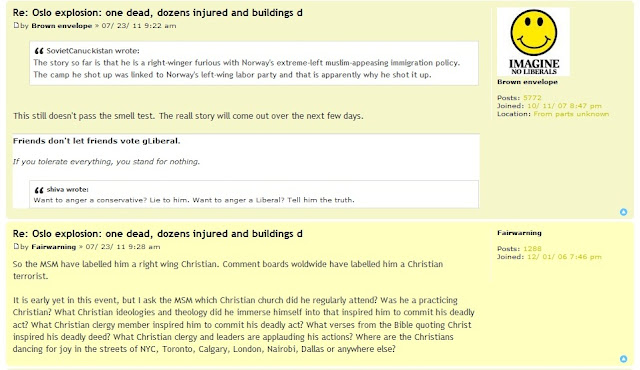 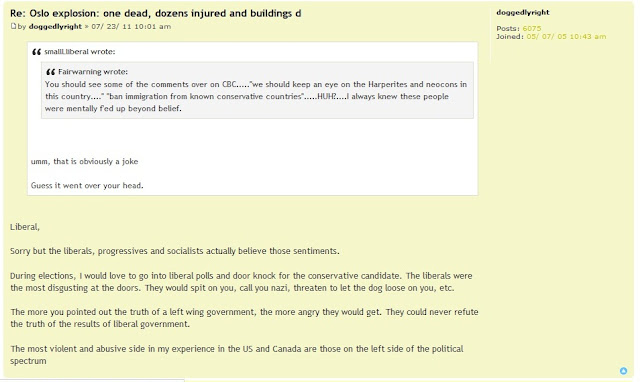 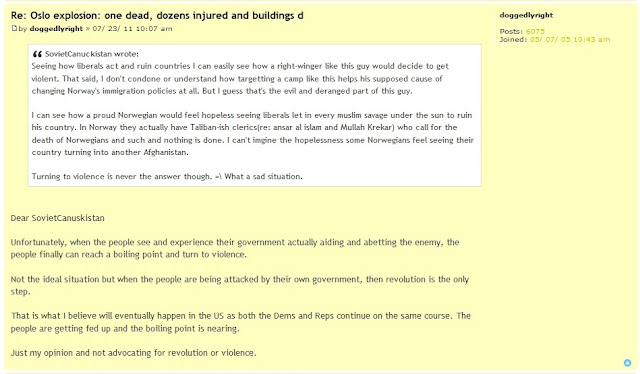 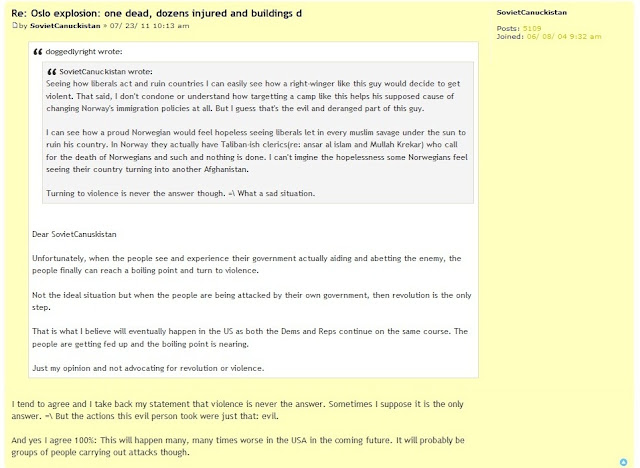 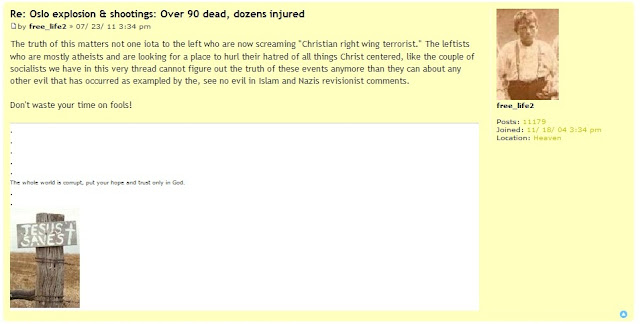 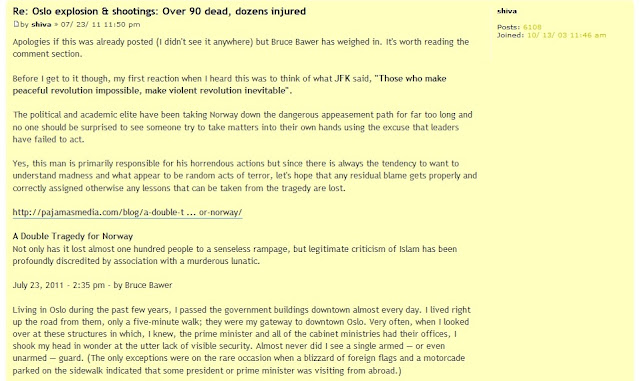 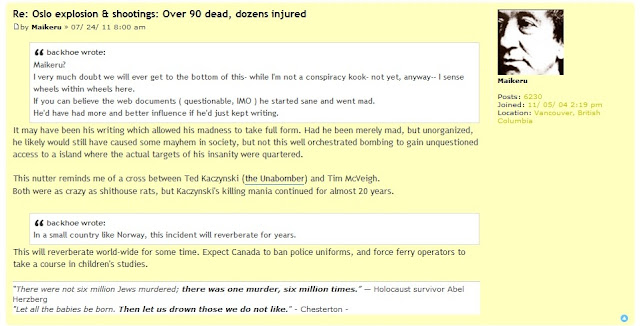 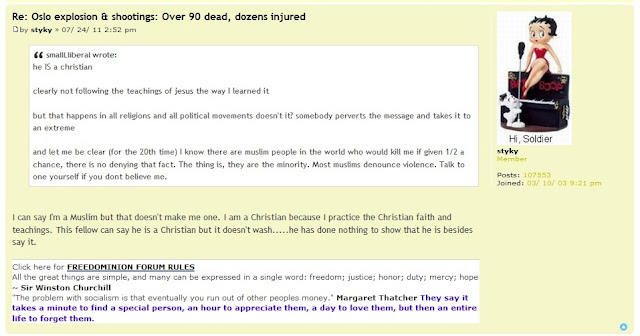 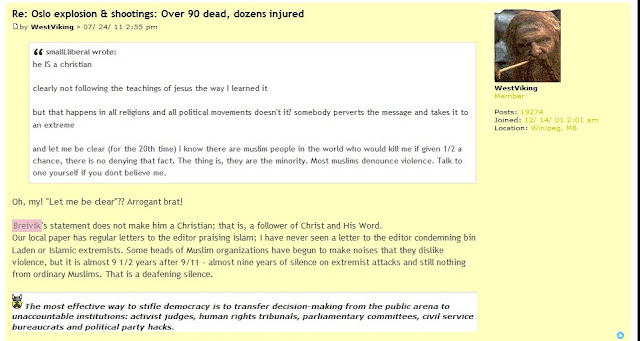 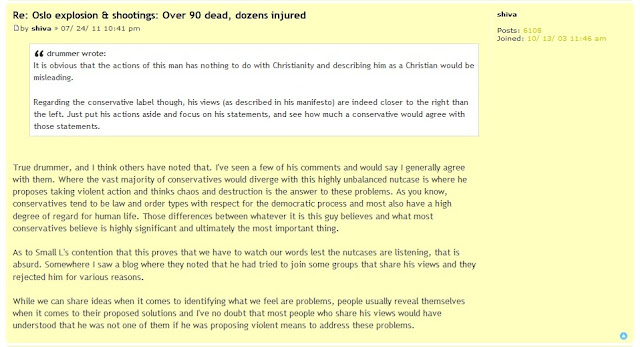 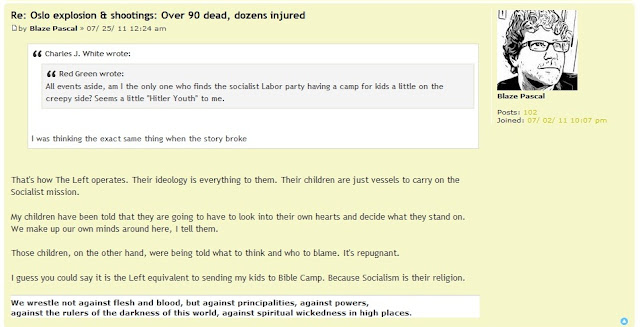 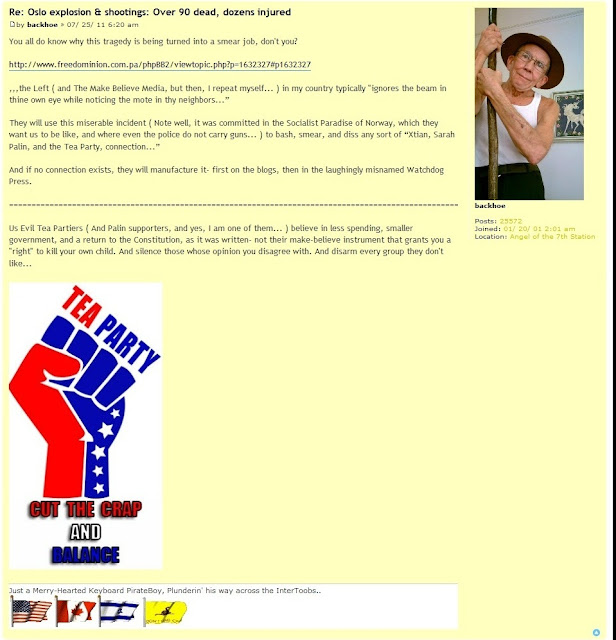 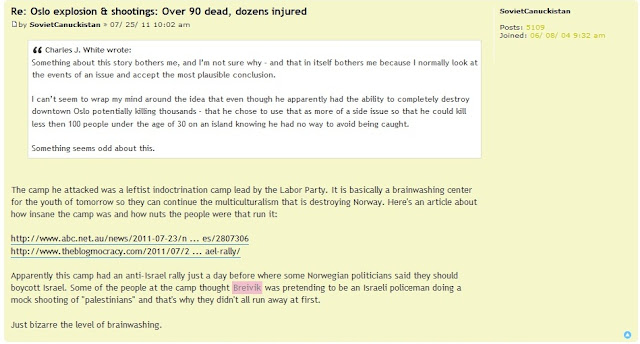 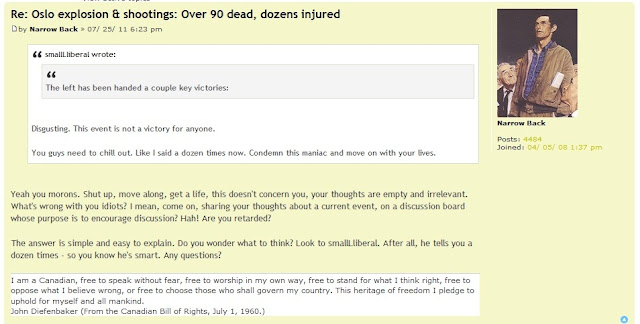 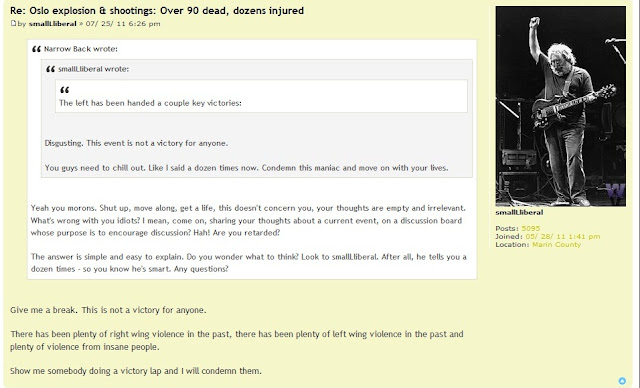 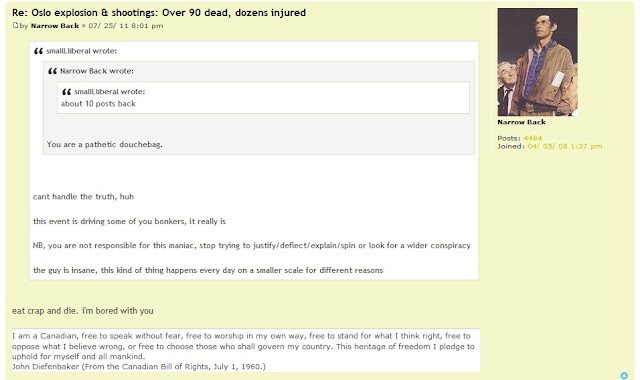 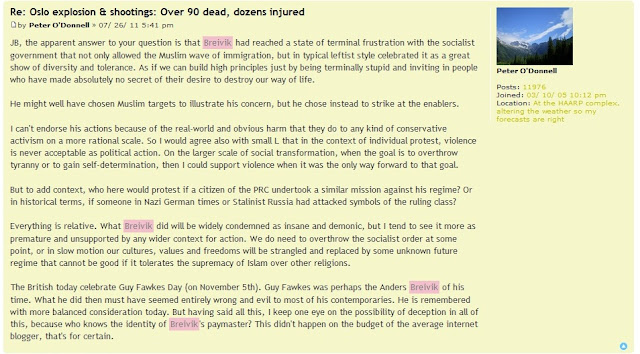 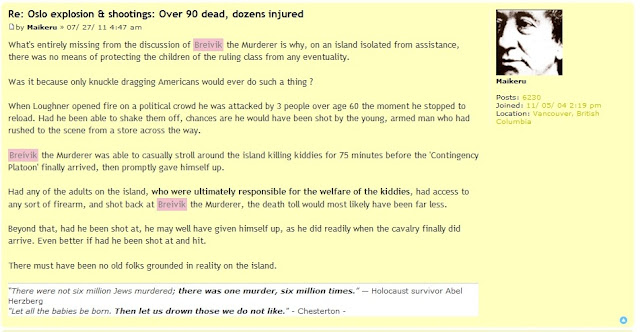 Yep, that was a long slog.

If you didn't manage to make it through all of them (and really, who could blame you?) here is a brief summary:
And so on....

One thing we noted is the disappointment of the Free Dominion posters as they realized that they were incorrect and had jumped to an erroneous conclusion. They are truly projecting when they lament that the massacre in Norway was somehow a victory for the left.

What kind of twisted, demented, mind would ever think of this as a victory? 77 people were murdered, and the folks at Free Dominion want to talk of winners and losers?

THAT is truly odious.

But they are nothing if not consistent. We return to the JT Ready murder-suicide. Note the similarities when compared to the Breivik murders: 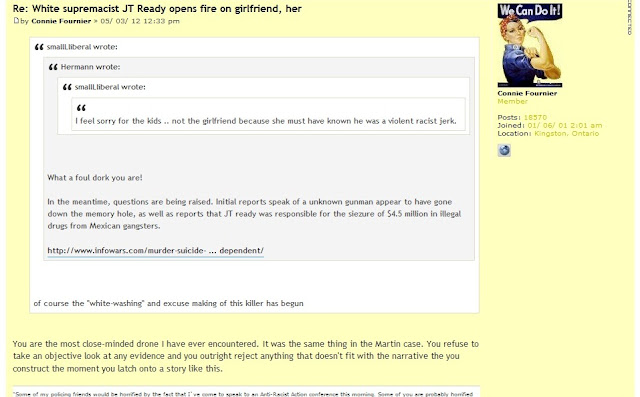 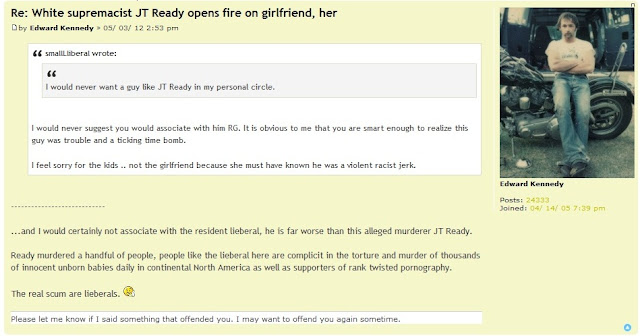 And it wouldn't really be a Free Dominion thread without Ed Kennedy threatening someone:

remember nos, its *not* racism if blacks/jews etc *really are* inferior

It goes to show that for all their $20 words, they are just a bunch of idiotic hicks..