Not sure of the details, but boneheads  are claiming online that Arthur Topham was arrested this past Wednesday:


Arthur Topham, publisher of the Radical Press website, was arrested on May 16, 2012, at 11:30 am on the Barkerville Highway near Quesnel, B.C., put in handcuffs and taken to jail. Apparently, Arthur’s home had been staked out for quite some time by the RCMP.
The warrant for his arrest read “commission of hate crimes” and was endorsed by Arthur’s special “friends” and professional denunciators Richard Warman and Harry Abrams of B’nai Brith, Canada.

What the Canadian Hate Crimes Tribunal failed to do, seems to have been a cinch for Richard and Harry, law or no law. In Canada, when B’nai Brith whistles, the RCMP jumps.

While in jail, Arthur’s house was raided and his computer equipment confiscated, including all his files. During the raid, Shasta, Arthur’s wife, wasn’t allowed into her home for 9 hours. Once the RCMP had taken what they wanted -- we wonder where the bugs are now hidden -- and finished questioning Arthur, he was released at 11:00 pm.

Arthur is now back home again, but prohibited from sending ANY emails or expressing any opinions about the issues all too familiar to us. In other words, freedom of speech, which he so passionately fights for, has now been stymied by unconstitutional summersaults, technically and “legally” muzzling him, for the time being. Without compunction, might is right in Canada.

Arthur advises NOT to send him any emails, since those would only wind up at the RCMP instead. What Arthur would like to have send to him -- by snail mail etc. -- is money, since he is -- always has been -- chronically broke. It would help to defray some of the legal expenses he will now incur. Arthur has asked Doug Christie, prominent defense lawyer in the Ernst Zündel case, for legal assistance and Doug agreed to help him without hesitation. He is one in a million! [NOTE: We at ARC might also add that one in a million people contract Creutzfeldt–Jakob disease]


During the last 14 years Arthur has literally spent tens of thousands of hours, and God only knows how much energy, sleepless nights and missed opportunities for personal advancement, in defense of our right to free speech and the exposure of vital truths, to the benefit and enlightenment of us all. That’s unselfishness at it’s best and I think it deserves some signs of appreciation.

So, please, kindly express them.

The best part of the above was the rampant paranoia.

Topham took an interest in us not too long ago. He even created this for us: 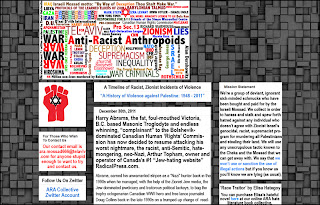 We'll see what more information we can dig up on this.
Posted by Nosferatu200 at 17:30

On the new colour scheme - red on black is hard to read.

What is with quesnel and anti-Semitic teachers?
Seems to be some sort of trend from this generation of people who graduated around the sixties...very interesting

He deserves everything he gets. Arthur is a complete fraud.

I've confirmed that the story is basically correct. Note that this is what the world will be like after s13. Same players, but with police subbed in for the HRCs. Also, note that this probably would have required the consent of the AG.

rotflmao@ the little snippet of creativity shown in the mock ARC site....that is truly hilarious. I'd love to be a fly on the wall when the RCMP sift through his computer files - yikes!

Still waiting for confirmation of charges....

FreeDomininion.ca claims to be 'non-racist' yet known racists such as Arthur Topham posted there under their real names.

What is up with THAT?e

i've known about arthur for a few years now, he has had connections with radical grassroots Natives who share a similar conspiratorial world-view, minus the white supremacy. wasn't aware of how neo-nazi he really was. thanks for the info...

It appears Mr. Townsend does not believe he has any legal duty to pay income tax. There's a supreme international law that over-rides the right of the Canadian government to tax citizens and the right of banks to enforce loans made to customers. When I researched the writings of Mr. Townsend, I discovered his view that in World War II, Hitler and the German people were actually the victims of the Jews. On Mr. Topham's website, you can join the anti-Zionist cause.

I am totally outraged that these racists would try to hide their anti-Semitism and white supremacy beliefs behind native causes.

And they're always appealing to the public for money without being upfront about their beliefs or what the charges are actually about.

Arthur Topham has been appealing to the public for money this is how he and his wife live, off the backs of good people he is nothing more than a ego maniac, I know him personally and wish I had never met him. He thinks Hitler was a hero what a load of BS. I had the misfortune of helping him and his wife financialy and as soon as my money ran out the nasty emails started he is a parasite on mankind. Please do not be fooled into helping him by sending money. Maybe he and his wife could get a JOB and forget about spreding hate we all want peace.