Looks like another of the Stormfront faithful have decided to give us a look over:

Losers and social outcasts? Dude, those are your fellow Stormfront members you're talking about.

Now aside from the inaccurate views on our relative economic positions and living arrangements, (we are members of a vigorous quilting bee, bird watching society and some of us had at least one date with a real member of the opposite sex and not with a World of Warcraft avatar.... we're looking at you Sparky!) we think GermBrit has a valid point here. Perhaps we should focus more on individuals more worthy of inclusion on these pages? Such as, oh, we don't know.... members of the Canadian Navy who post on Stormfront? 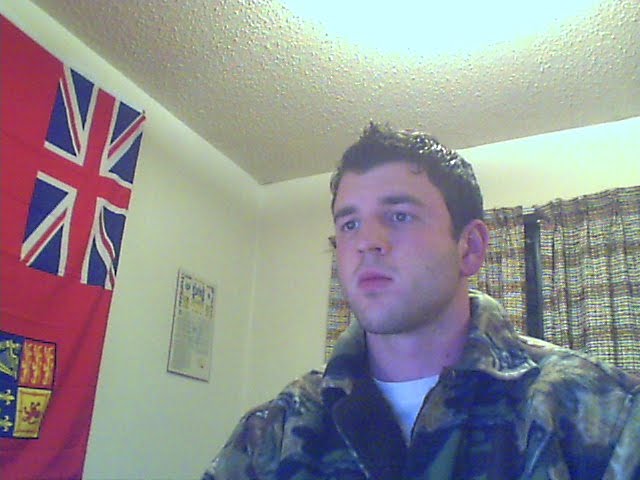 Meet Stormfront member GermBrit. Birthname Kevin Stewart. Having lived the majority of his life in British Columbia, Kevin is now in Halifax, Nova Scotia training to become a member of the Canadian navy.

Now isn't only a Stormfront member. He's also close to members of Volksfront based in B.C.: 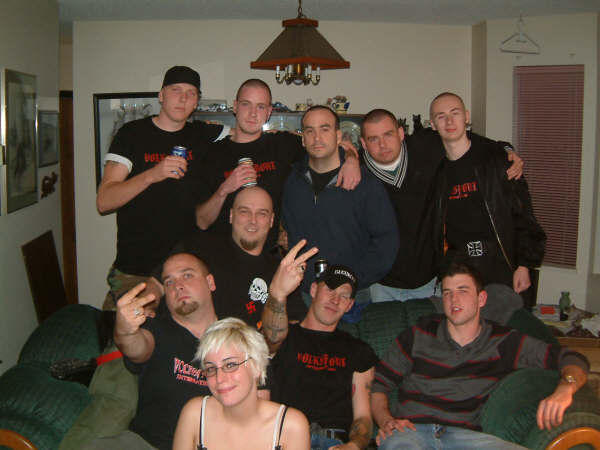 While it might be a bit outdated, here's a picture with some labels: 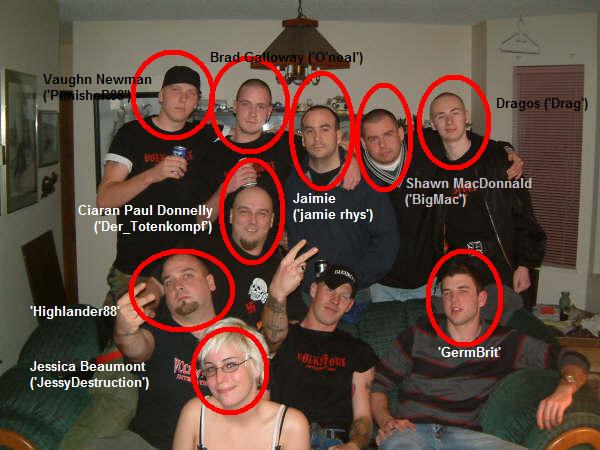 Kevin Stewart has some interesting beliefs, many of which may very well put him at odds with military protocols:

First, slavery wasn't such a bad gig, though he himself doesn't condone it.

He seems to be a big fan of eugenics and the creation of a "true master race."

Europeans have more of a right to this land than even the original inhabitants.

Remember when you read this next one that Kevin is now a member of the Canadian military.

While he doesn't condone the actions of the man who assaulted the Muslim cleric, perhaps it's not so bad (you'll see a trend in which Kevin, "doesn't condone" an action but tacitly approves).

Kevin discusses his membership in the racist British National Party.

Churchill, not Hitler, to blame for World War II.

Antisemitic comments regarding Jewish control of, well, everything.

Not much of an Obama fan. That in and of itself isn't a big deal, but we think Obama's ethnicity shouldn't really be a factor.

Has no problem with being labeled as a Nazi or racist.

Complains about other ethnic groups getting "handouts" from the government, but has no problem when he's the recipient.

Hey, guess what? More violence committed by racists that Kevin doesn't condone, but then goes on to see the silver lining.

Remember the Aryan Guard? Kevin was an early supporter.

Not very inclusive of a person who is supposed to be serving all Canadians, don't you all think?

Sure, one African-American youth might be able to finish a Rubiks Cube, but most aren't as smart as whites so it's meaningless.

Uhm...... steroids are illegal for recreational use Kevin.

Sure this is overkill, but it's a small portion of the more than 1500 posts Kevin has made on an infamously racist website; most of his posts seem to focus on "proving" that people of African heritage are genetically predisposed to violence and are less intelligent than Europeans based on discredited pseudoscience contained in, The Bell Curve and the works of Philippe Rushton.

We think we would like to make this a continuing feature on this blog. There are other Canadian racists who now members of the Canadian military. Perhaps we would do the armed forces a service by helping to identify them?

In the meantime if any of our readers would like to contact the navy and voice concerns about Kevin's current participation on a known hate website and a known hate group, we would suggest contacting the following:

Excellent post. I hope the armed forces is paying attention. Because Canadians need Nazi scum in our forces like we need a hole in the head. All those Canadians didn't die fighting Hitler, so his degenerate little spawn could run around Canada insulting their memory.
Thanks for running screen caps so we don't have to visit those disgusting sites, and keep up the good work.

Haha, seems like he burned you! Overkill, sure! T'is evidence of your wounded ego. Why So Serious? Lolz...

You'll attempt to destroy a guy's reputation and future planning over that? Fair enough, I guess! After all, he's a RACIST! Dun Dun Dun... OH MY LANTA HE'S FUCKING EVIL! SQUEEE!

The guy's allowed to disagree with popular opinion... and yet you and your fellows seem to think that's such a big crime and so, you pull something like this? You're morally criminal, and obviously spiritually challenged and incapacitated.

Such clever stunts! You saboteurs, you're weak, seriously. People like you get theirs though, at the best of times. Yet, I won't celebrate.

There's probably no use in trying to reason with a meatsack like you, but... when you're someone as compassionate and sympathetic as I, you just don't give up on earth's losers! I love how, to an intellectual, it's evident that there's VERY little difference between yourself and those that you despise.

As a born Canadian I am thoroughly disgusted that twisted individuals such as Kevin are allowed to stand alongside real Canadian soldiers who are literally dying right now as they fight to protect this country and others against diseased attitudes such as his.

I pray that the voice of ARC will always remain strong and may many be added to it!

You know, as much as I agree about nazis not being allowed in the Canadian Forces...groups which the anti-racist movement is allies with (such as the former CCP etc) aren't quite fond of the amry themselves. So why do we care?

OH NO, looks like somebody broke your heart. lol

Did it ever occur to the individuals chortling over Mr. Stewarts "burn" that we're sort of thrilled with his characterization? Means he and the rest of the boneheads has no idea who the members of ARC are. In fact this characterization of our members as unemployed miscreants is a key factor in why the, "White Nationalist" movement keeps spinning their wheels. They simply can't see past the caricatures they've built of their opposition over the years and they end up underestimating their opposition.

We, on the other hand, know exactly whom we're dealing with.

There are very, very few people who know the identities of the members of the Collective. And they're also enjoying how we're being characterized.

For those who would minimize the threat that having a neo-nazi in the Canadian forces poses, read up on this: http://en.wikipedia.org/wiki/Somalia_Affair

in the somali situation, all accussed and charged spent less than 1 year in jail for their crimes.
tell me how that is justice???
tellme the canadian government isn't a racist faction that habours neo-nazi racist individuals and does give a shit about minorities.